Northern Spotted Owl populations are declining in all parts of their range in the Pacific North-west, according to research published in American journal The Condor. Northern Spotted Owl is the Pacific coast subspecies of Spotted Owl, as relative of Tawny Owl. It's nemesis, Barred Owl, is also similar to Tawny Owl and breeds across northern North America, the Mid-West and east.

Based on data from 11 study areas across Washington, Oregon and northern California, a range-wide decline of nearly four percent per year was estimated from 1985 to 2013. Researchers found evidence that the invasive Barred Owl is playing a pivotal role in the continued decline of Spotted Owls, although habitat loss and climate variation were also important in some parts of the species range. Barred Owls compete with Spotted Owls for space, food and habitat.

This research indicated that, since monitoring began, Spotted Owl populations have declined 55-77 per cent in Washington, 31-68 per cent in Oregon and 32-55 per cent in California. In addition, population declines are now occurring on study areas in southern Oregon and northern California that were previously experiencing little to no detectable fall in numbers through to 2009. 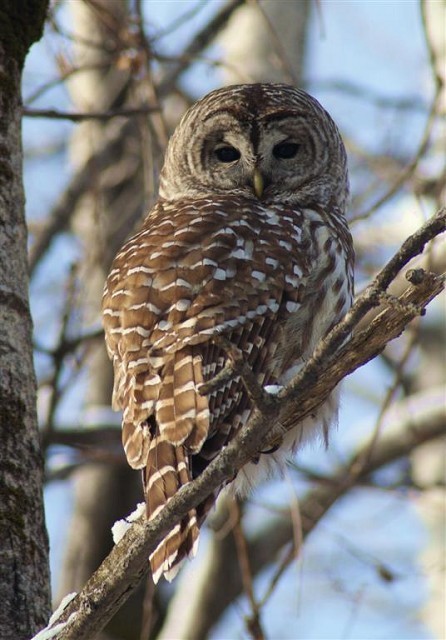 The invasive Barred Owl is a direct threat to its relative, Northern Spotted Owl (Photo: Jessica)

Dr Katie Dugger, a research biologist at Oregon State University and lead author of the report, said: "This study provides strong evidence that Barred Owls are negatively affecting Spotted Owl populations. The presence of Barred Owls was associated with decreasing Spotted Owl survival rates in some study areas, and Spotted Owls were disappearing from many of their historical breeding territories as those areas were invaded by Barred Owls."

Dr Dugger also said: "The amount of suitable habitat required by Spotted Owls for nesting and roosting is important because then species' survival, colonisation of empty territories and number of young produced tends to be higher in areas with larger amounts of suitable habitat, at least in some study areas."

Relationships between Spotted Owl populations and climate was complex and variable, but range-wide, the study results suggested that survival of their young and their ability to become part of the breeding population increased when winters were drier. This may become a factor in population levels in the future, given climate change predictions for the Pacific North-west include warmer, wetter winters.

Although they do occur in young forests in some areas, Northern Spotted Owls are strongly associated with old forest in most of their range. The US Fish and Wildlife Service listed Northern Spotted Owl as threatened in 1990 because of declines in old growth forest habitat throughout its range in Washington, Oregon and northern California.