There was a time when Ortolan Bunting was an expected, albeit scarce, spring and autumn migrant in Britain. However, in recent years the species has declined significantly in its breeding range, and encounters have become much less frequent. As a result, observer familiarity is harder to acquire and occasional out-of-place Ortolans – especially young birds in autumn – have been a source of confusion for the unwary and less experienced. Keith Vinicombe has seen more than his fair share over the years, and here he looks at its occurrence and identification, and the main confusion risks. 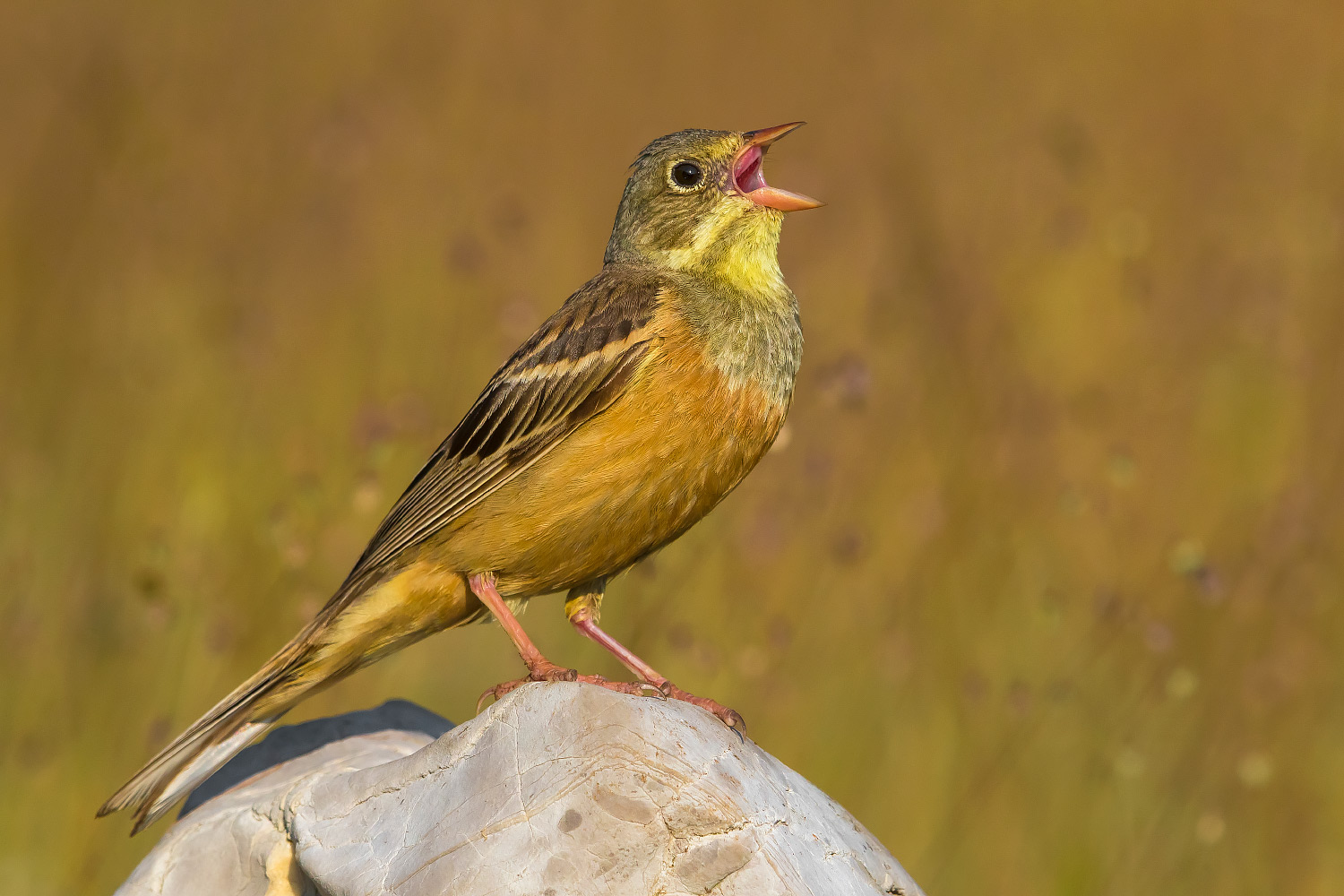 Male Ortolan Bunting (Provence, France, 10 July 2016). This singing male is a medium-sized, slim and compact bunting, smaller and sleeker than, for example, Yellowhammer. The most distinctive thing about it is its grey-green head and breast, with an obvious yellow orbital ring, submoustachial stripe and throat. The underparts are a very distinctive deep orange. Both the bill and the legs are obviously pink. In flight, Ortolans appear sleek and compact and they give a soft, slightly metallic plik or plit call. In Britain, they are often found in coastal stubble fields, usually in late August and September.

Ortolan Bunting is a scarce migrant in Britain, with a total of 2,534 recorded during the 48 years from 1968 to 2015 (White and Kehoe 2017). As the graph below shows, the highest totals were in the late Sixties, when there was an annual mean of 87. The lowest totals came in 2000-2009, with an annual average of 42, and this fell further to a mean of just 31 annually during the following six years.

These figures reflect a steep decline in the European breeding population, beginning in the 1930s, accelerating into the 1960s, and continuing to the present day. This largely relates to agricultural intensification, including the use of pesticides. The highest total ever recorded in Britain was a remarkable 100 estimated on St Agnes, Scilly, on 25 September 1956 (Flood et al 2007).

In 2015, the last year for which national data are available, there were just three spring records (between 20 April and 23 June) and 29 in autumn (from 16 August to 17 October). Most occurred in south-west England, with just four each in Wales and Scotland. The most surprising record was of one in Richmond Park, London, on 5 May 2011 (White and Kehoe 2017). The largest number I ever saw was a flock of six at Lavernock Point, Glamorgan, on 13 September 1992.

In 2016 nocturnal monitoring of migration by The Sound Approach broke new ground by revealing that Ortolan Buntings were passing regularly over listening stations in Dorset, with a minimum estimate of 27 birds recorded at night between 22 August and 12 September that year (Robb et al 2017). This previously undetected phenomenon will improve the statistics in future years, especially if other areas also register the species at night, something that must be considered likely after records from Cambridgeshire and Bedfordshire in 2017. However, ultimately, the underlying trend remains one of significant decline.

Ortolan has a huge range, breeding from Iberia and southern Europe north into central Fennoscandia and east across Russia, almost reaching the Baikal region, as well as south into Turkey and parts of the Middle East. It winters in a long, relatively narrow east-west band to the south of the Sahara, extending north-eastwards into Sudan and Ethiopia.

Probably the best way to find an Ortolan in Britain is to stomp through coastal stubble fields. However, to avoid the wrath of landowners, it's probably wise to instead scan nearby bushes, to which they regularly retreat when disturbed. One of the best places to see the species is in the Top Fields on Portland, Dorset, although annual totals there are not what they used to be as arable farming in the area has been largely replaced by grass fields and paddocks.

Ortolan is a sleek, compact and rather streamlined bunting, certainly in comparison with Yellowhammer, which is a bulkier bird with a rather long, notched tail. Reed Bunting is similar in size, but it is somewhat smaller and less streamlined, with shorter, rather rounded wings that produce an erratic, hesitant flight action.

Being a long-range migrant, Ortolan has proportionally longer wings than our resident buntings, giving it a neat, compact and sleek shape and a much more purposeful flight. It then resembles a blunt-headed pipit, an impression that's enhanced by its small, triangular bill. Like most other buntings, Ortolans have white outer tail feathers.

One of the best ways to find an Ortolan is by its call. This is an unobtrusive soft, liquid plip … plip, also described as a slightly metallic plik, plit, plink or wink, sometimes doubled to wink wink, or maybe a tswik. As many as eight different call types have been described, and five of these are said to be common (Robb et al 2016). Once known, these calls are a very useful way of locating Ortolan Buntings, both at rest and in flight. When flushed, they often fly off very high.

If in doubt about an Ortolan's ageing, first-winters have pointed tail feather tips, whereas adults have somewhat rounder tips, especially on the central feathers (see Svensson 1992). A good telescope view or a decent photograph would be necessary to confirm this character.

The only other species on the British list that closely resembles Ortolan is Cretzschmar's Bunting. There are, however, just six accepted British records, all in May or June except for one on North Ronaldsay, Orkney, from 19-21 September 2008. The most recent was a well-twitched bird on Bardsey, Caernarfonshire, in June 2015.

Although it resembles Ortolan Bunting, adult male Cretzschmar's has a grey-blue head and a brownish-orange throat, with only a weak grey malar stripe. The underparts are also brownish-orange, with similar tones to the upperparts, being distinctly brighter and more chestnut on the scapulars. Females are similar but duller, as are the distinctly streaked first-winters.

Grey-necked Bunting, a Cretzschmar's lookalike that breeds from eastern Turkey into Central Asia, has yet to be recorded in Britain. However, vagrants have reached north-west Europe on a few occasions, including Norway, Sweden, Germany and The Netherlands.

Adults resemble Cretzschmar's but are more washed out in appearance, with less brightly saturated plumage and off-white, not brownish-orange, throat and submoustachial stripe. Grey-necked lacks green and yellow; a finer, more pointed bill and grey(ish) lesser coverts are further distinctions from both Ortolan and Cretzschmar's, while first-winters are less prominently streaked above than in those two species.

Another similar species is Cinereous Bunting, which has a restricted range from southern Turkey eastwards into south-western Iran. Again, there are no British records, though vagrants have occurred west to Denmark and Germany and it's therefore a conceivable vagrant. Although similar to Ortolan in size and shape, the attractive adults are virtually unstreaked and predominantly yellow on the head and underparts, with (in the nominate western subspecies) an ashy-grey breast, neck and nape. 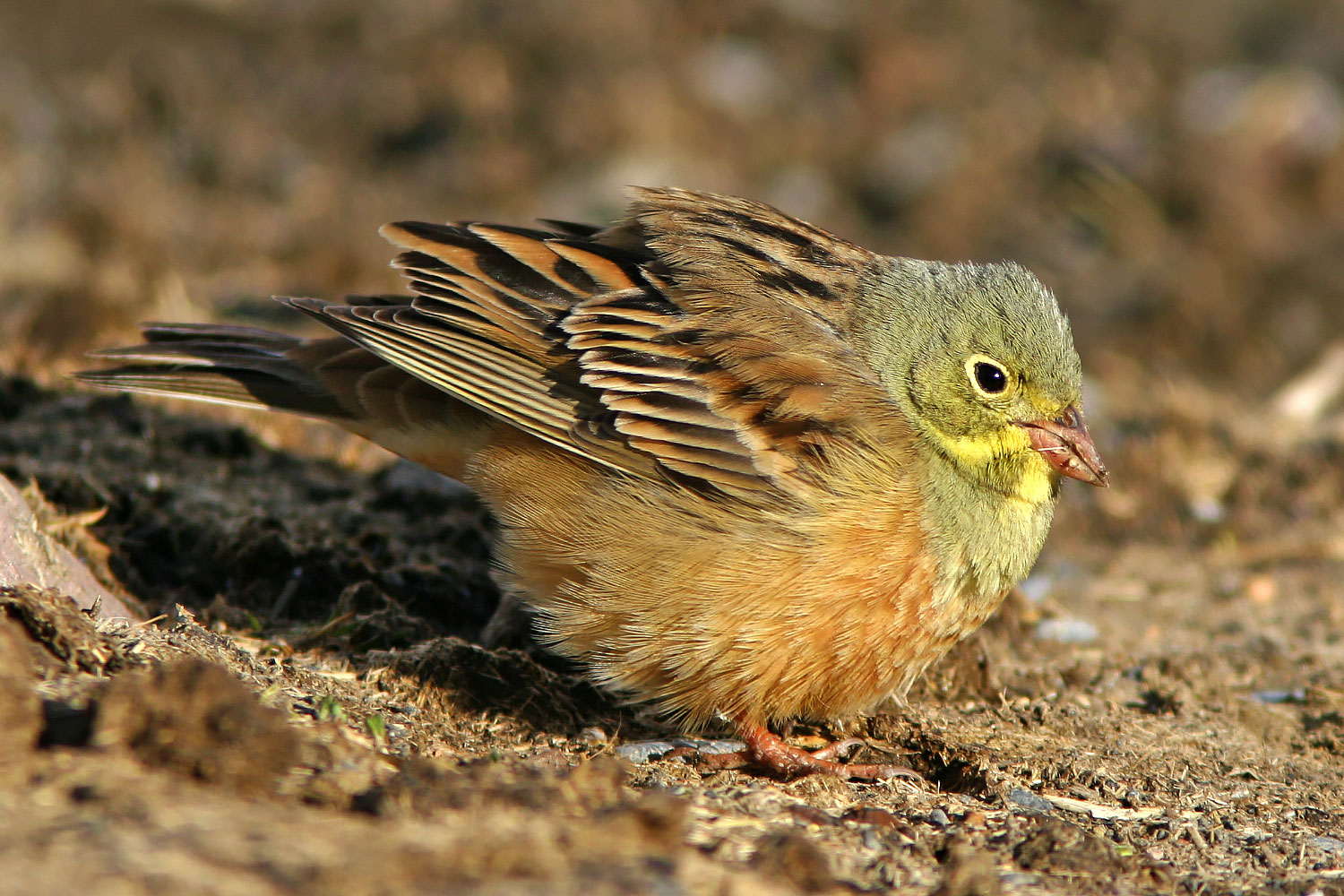 Male Ortolan Bunting (Sno Valley, Georgia, 4 May 2007). Unlike the first photograph, this bird has its feathers fluffed up, making it appear much fatter and more rounded. Its greeny-grey head and upper breast are distinctly tinged with yellow and, again, it shows the yellow throat and submoustachial stripe. The dark orange underparts are very distinctive and strong dark orange tones are also obvious on the scapulars, lesser and median coverts and tertials. Also visible is the white in the outer tail feather, which is obvious in flight (Dominic Mitchell). 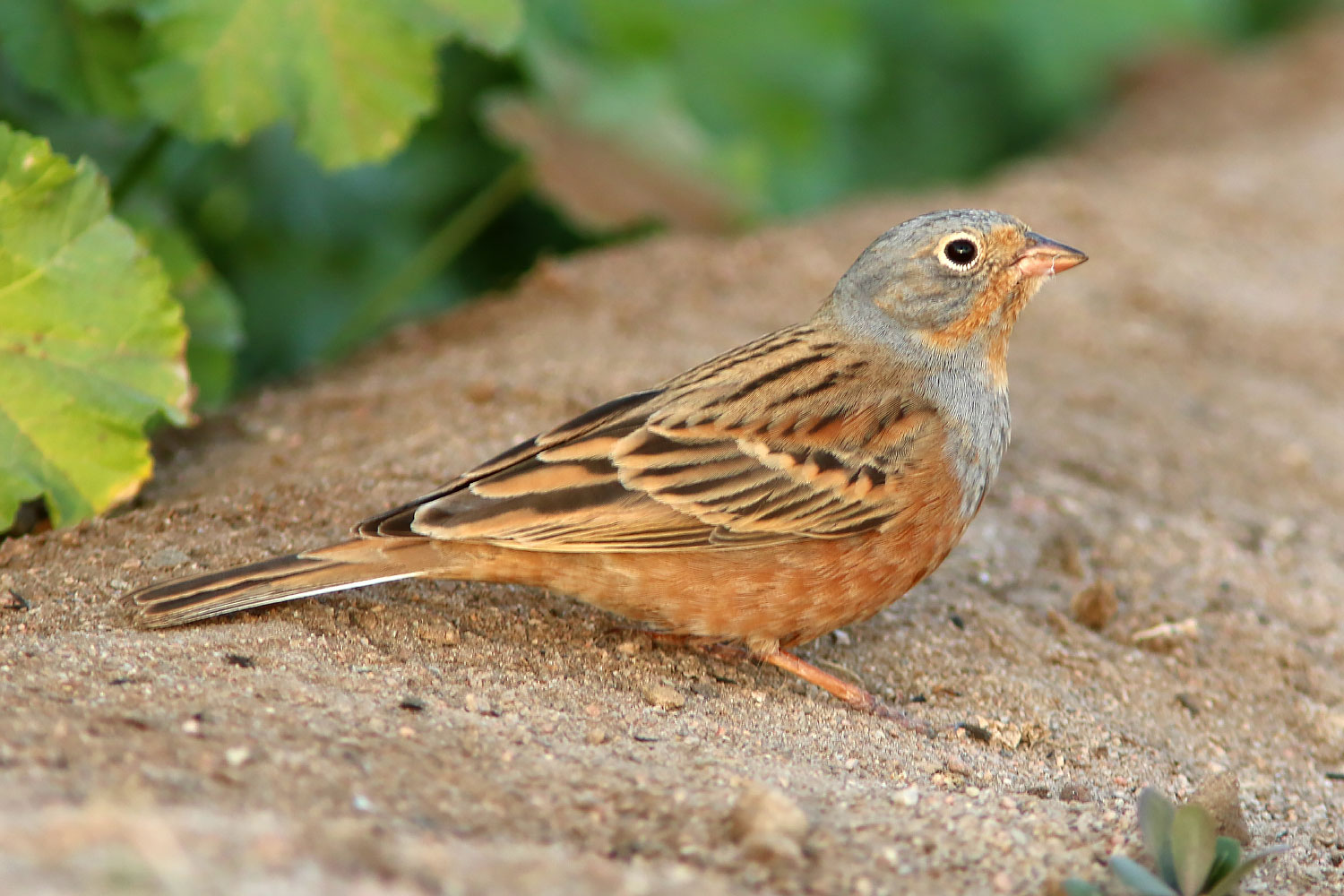 Male Cretzschmar's Bunting (Aqaba, Jordan, 18 March 2015). This photograph shows that Cretzschmar's Bunting is very similar to Ortolan in size, shape and general plumage pattern. However, what instantly separates it is its bluish-grey head, moustachial stripe and upper breast, which contrast with a deep orange malar stripe and throat, as well as the dark orange underparts. The fringes to the scapulars and wing feathers are also very orange in tone (Dominic Mitchell). 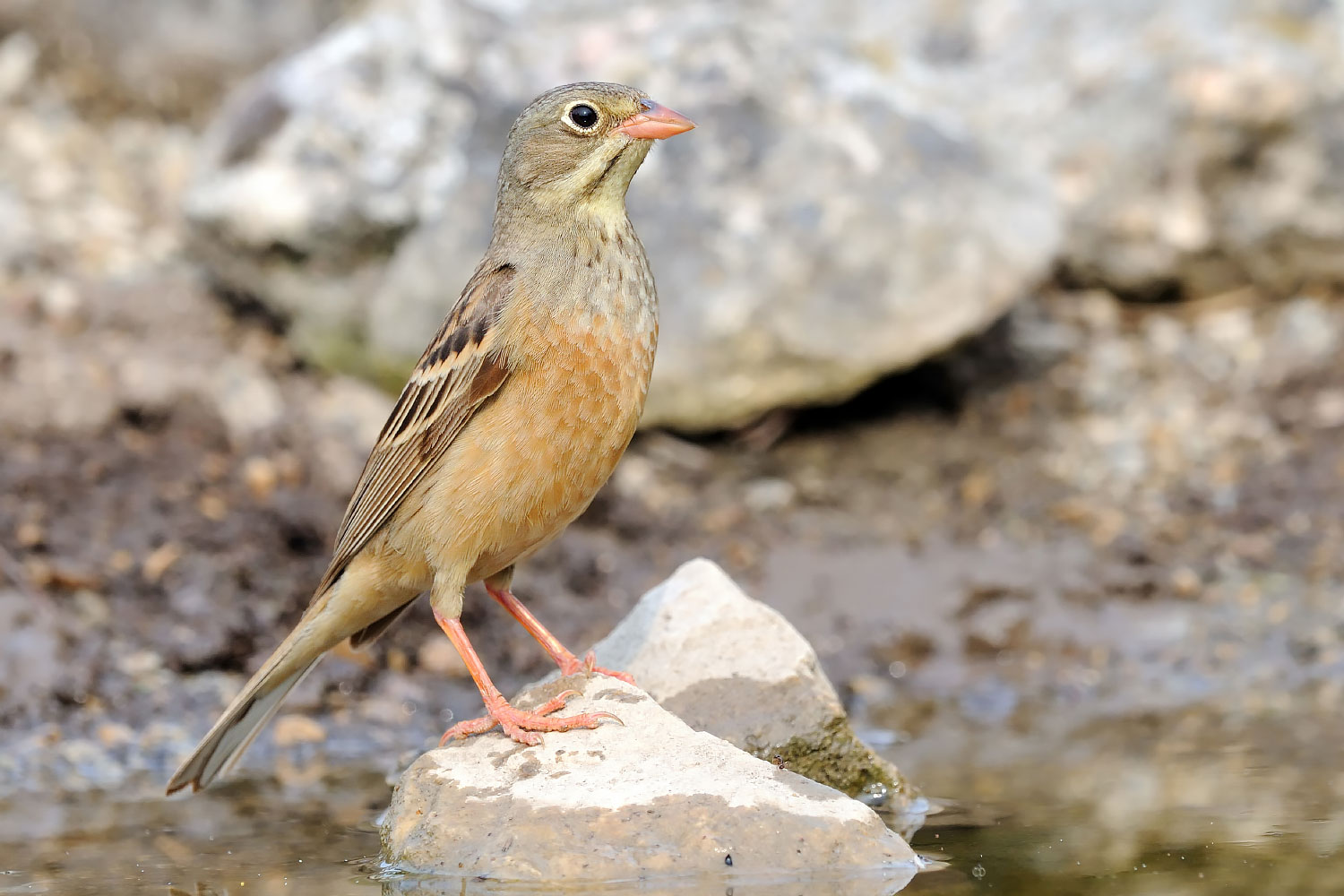 Female Ortolan Bunting (Bulgaria, 31 July 2018). This bird shows the grey head and breast, yellow malar stripe and throat, and the orange underparts. The whitish-yellow eyering is also obvious, as is the compact, pointed pink bill. However, the strong grey and orange tones are subdued by pale feather fringes. This suggests this bird is a first-winter, having recently grown its new body feathers after moulting its juvenile ones. This is confirmed by a look at the tips of the tail feathers, which are relatively narrow and clearly pointed. On fresh adults the tail feather tips are less pointed. Note also the very obvious pale pink legs (Olaf Kloss / BIA). 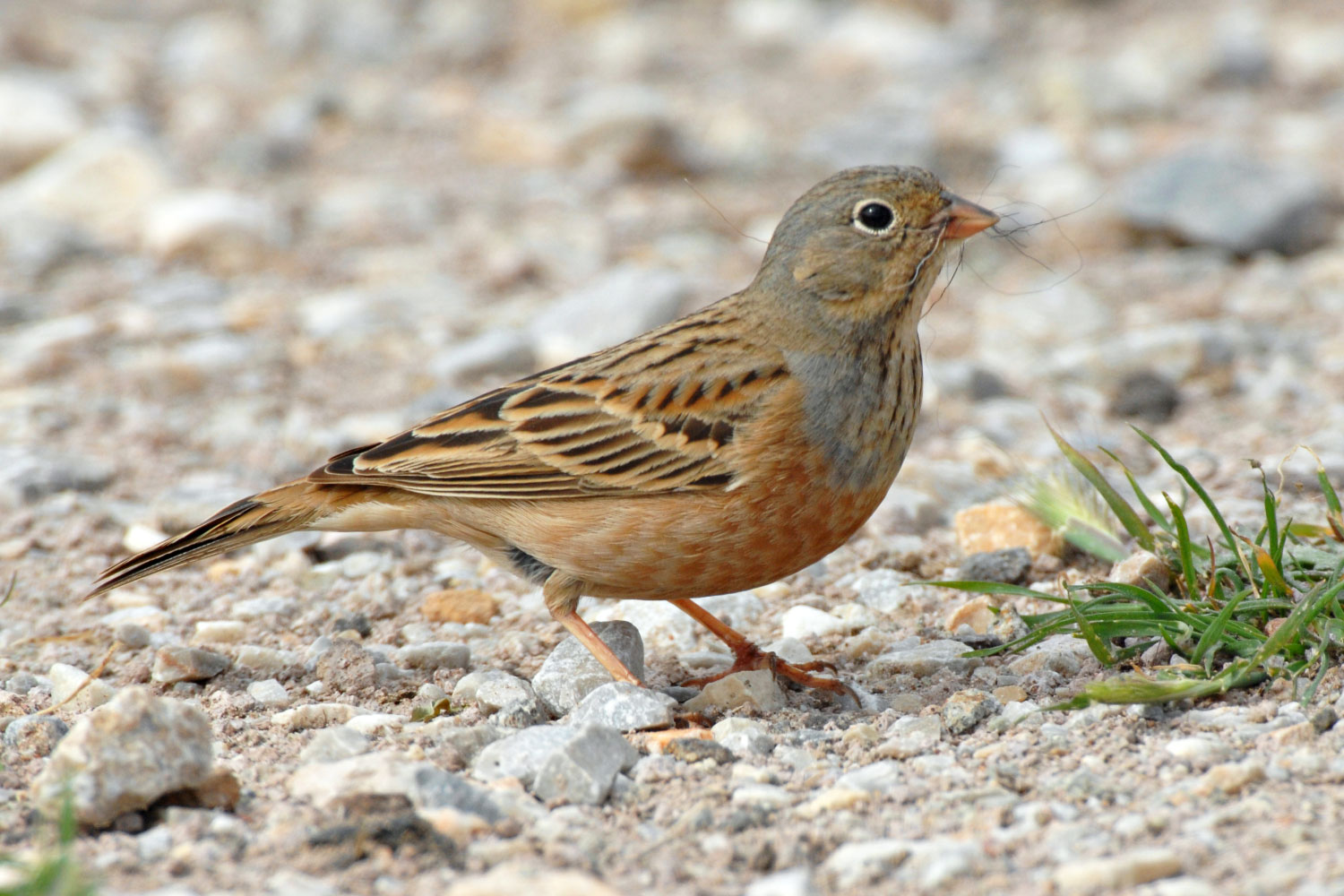 Female Cretzschmar's Bunting (Lesvos, Greece, 6 April 2007). This female, photographed carrying nesting material in spring, is very similar to the male in image 3, showing a grey head with a dull orangey-yellow malar stripe and a pale creamy-yellow, chin and throat. However, this colour extends onto the upper breast, where it is obviously streaked. It therefore lacks the male's grey breast band. It is a distinctly duller, less immaculate bird than the males shown in the previous photographs, with the malar stripe and the throat being less well defined (Richard Brooks). 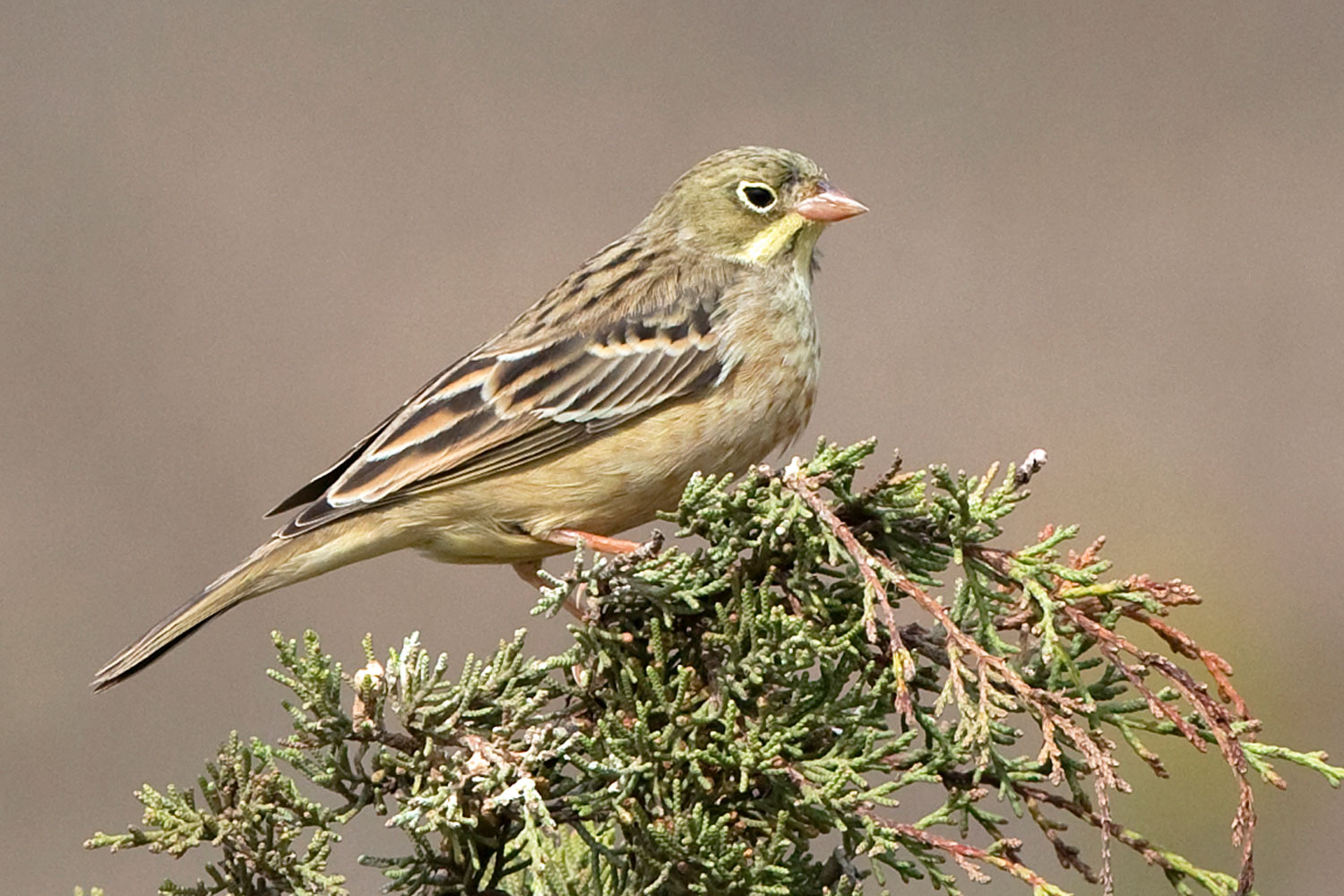 Adult Ortolan Bunting (Algarve, Portugal, 7 October 2015). Although this bird's plumage is similar to that of the male's, it is much more subdued, with a strong green tinge to the crown, which is delicately streaked with brown. The upper breast too is rather pale, blurring into the pale orangey lower breast and flanks. The breast also shows quite extensive light streaking. This indicates that it is a female. Compared to a male, the underparts too are a paler shade of orange. This photograph also shows the species' small pointed bill and its sleek body shape (Robin Chittenden). 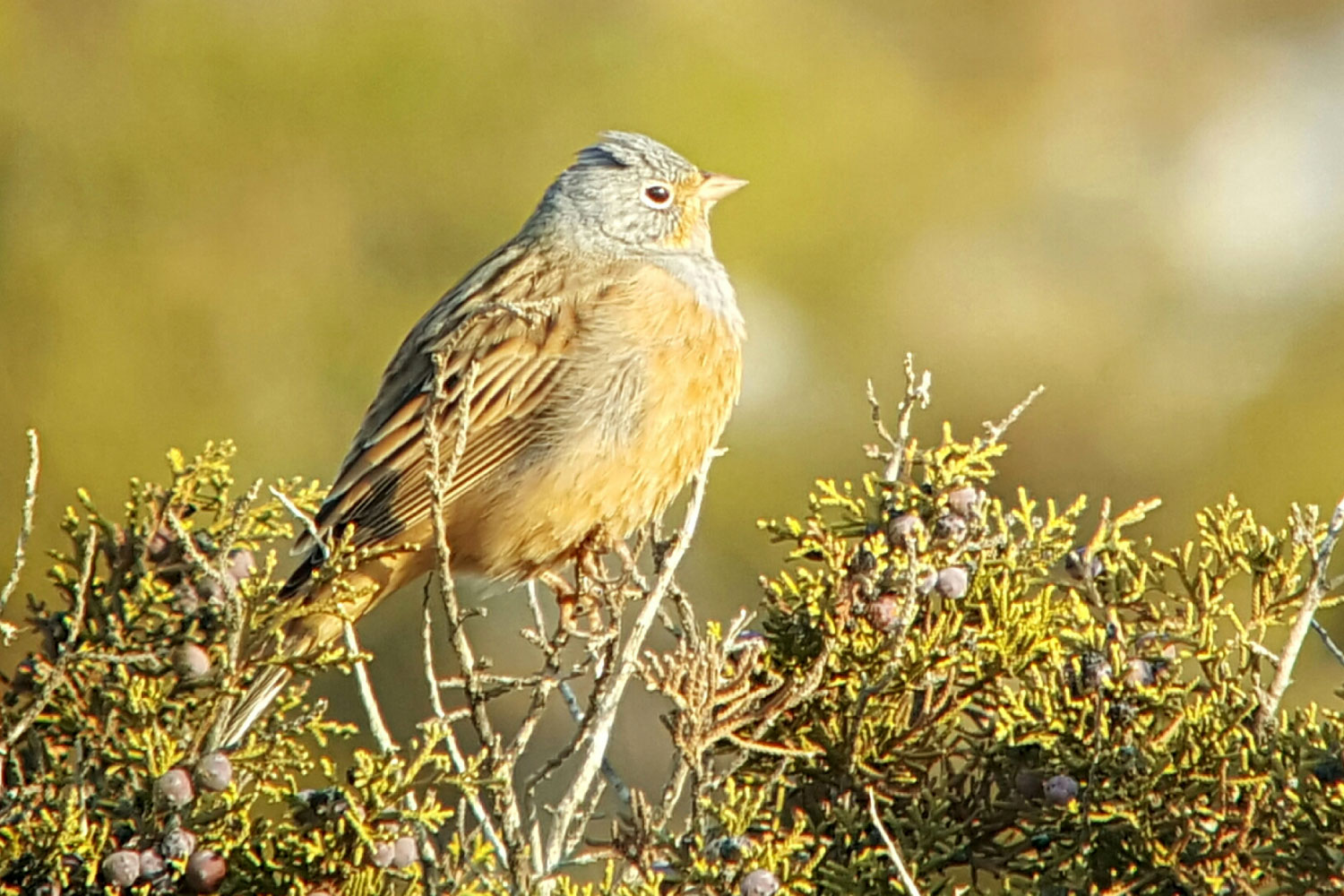 Adult Cretzschmar's Bunting (Famagusta, Cyprus, 13 September 2016). This bird has a rather yellow-looking chin and throat, suggesting Ortolan Bunting, but this would appear to be the result of the strong light. The head and upper breast, however, are distinctly blue-grey, which is characteristic of Cretzschmar's. In addition, the grey moustachial stripe is thin, weak and subdued, almost giving the impression that the entire chin and throat are unmarked. Again, this is typical of Cretzschmar's (Neil Loverock). 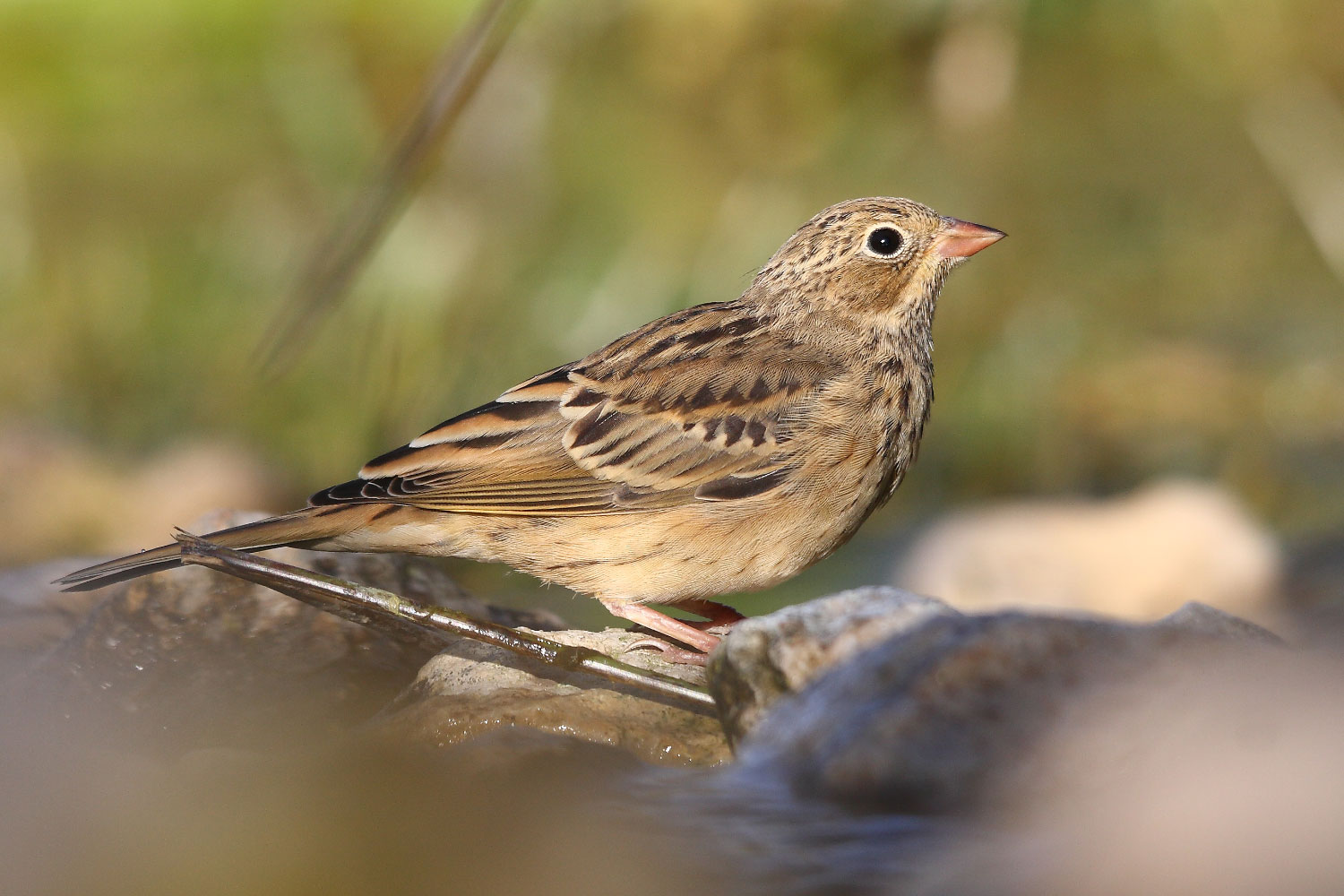 Juvenile Ortolan Bunting (Palencia, Spain, 7 August 2011). Compared with the previous photographs, this bird looks positively non-descript, totally lacking any blue and orange tones to the underparts. The two most important features are the rather pointed orangey bill and the prominent white orbital ring. The latter is in fact oddly reminiscent of the white orbital ring of a Little Bunting. This bird is, in fact, a juvenile Ortolan. Juveniles do not occur in Britain, their autumn migration not getting under way until they have moulted into first-winter plumage (Carlos N G Bocos). 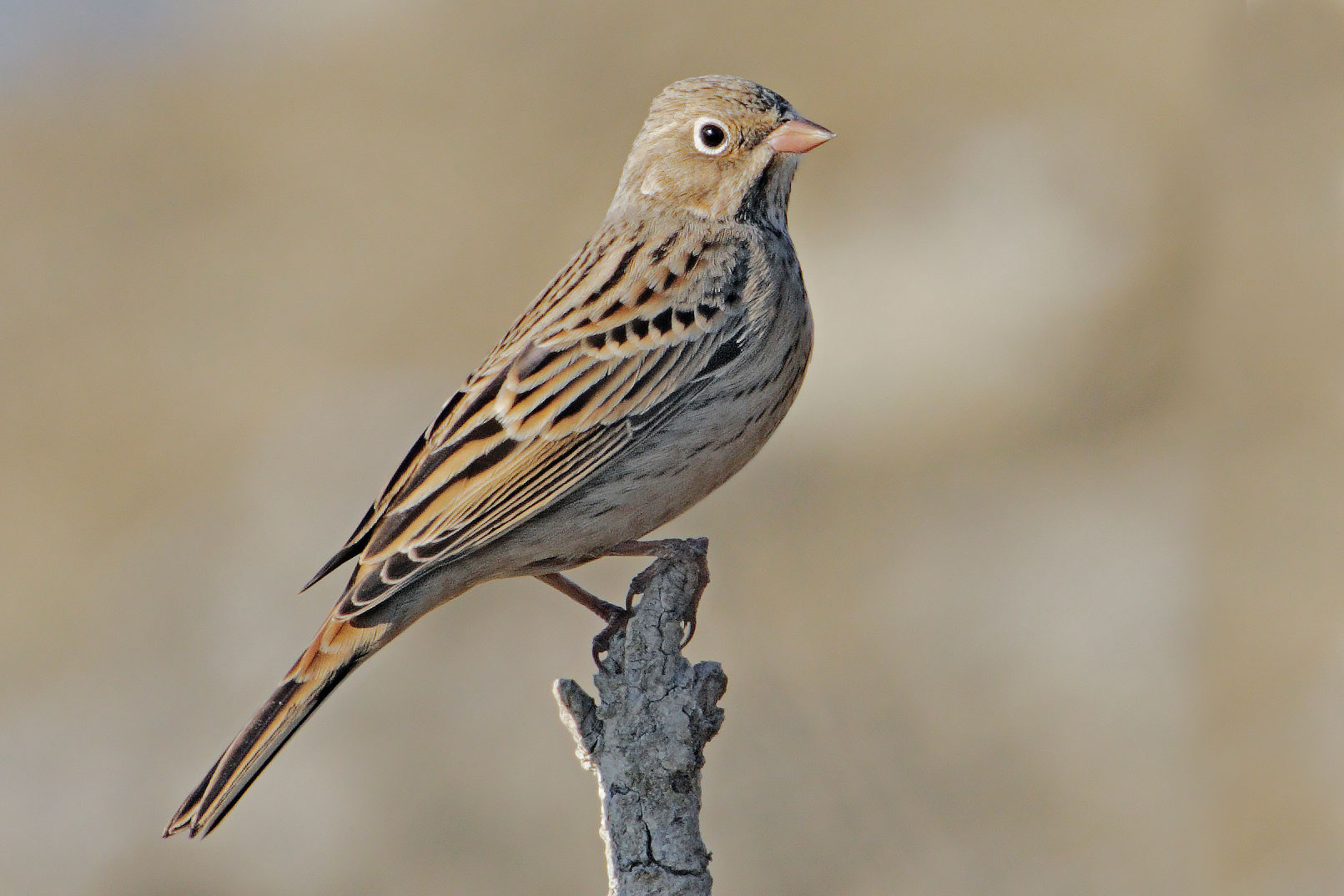 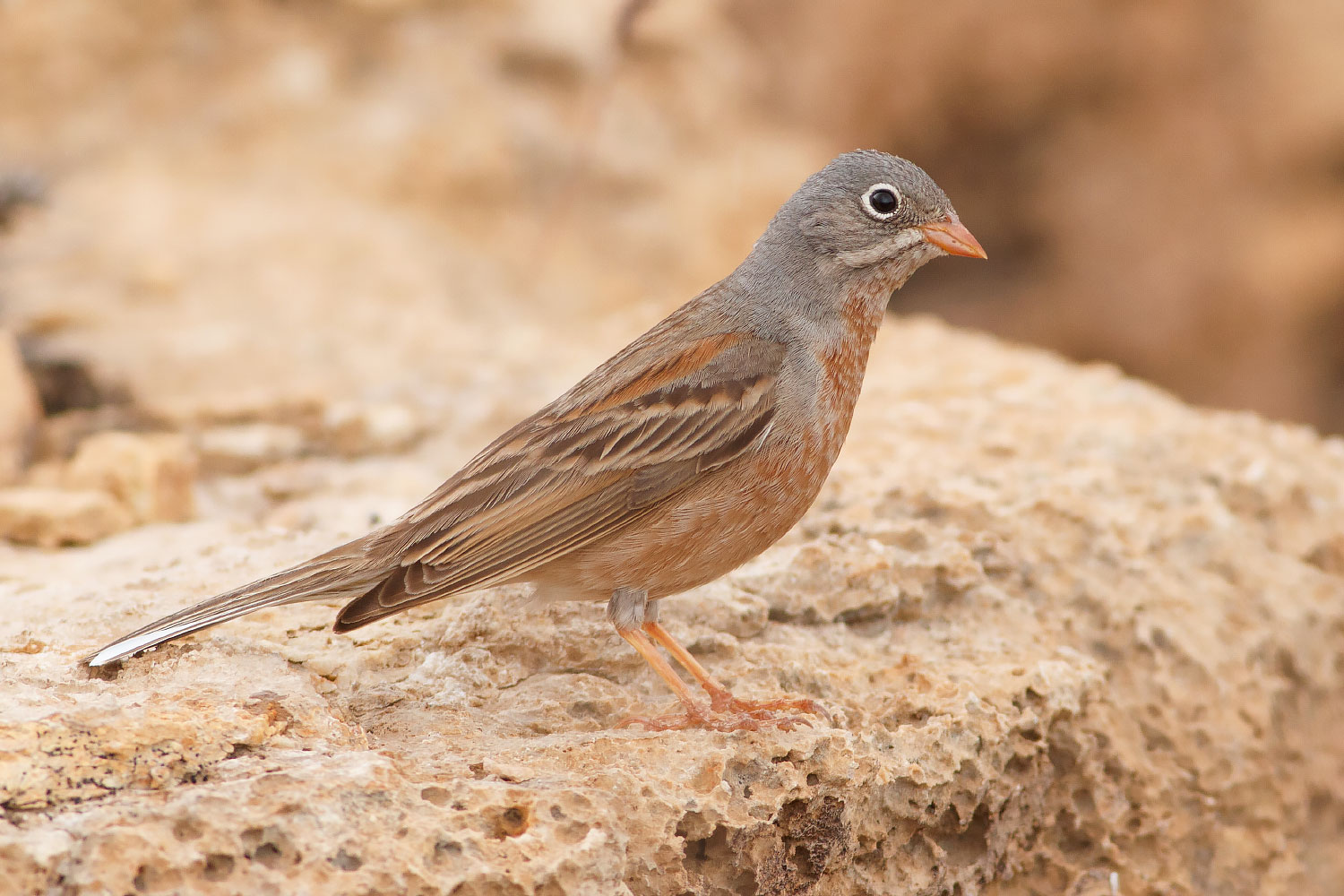 Male Grey-necked Bunting (Nakhchivan, Azerbaijan, 12 May 2015). A potential vagrant to Britain is Grey-necked Bunting. Adult males are most like Cretzschmar's Bunting, having a pale blue-grey head, neck and moustachial stripe, but they are quite easily identified by the lack of an obvious breast band (a feature that also separates them from Ortolan). Instead, the pale yellowy throat and malar stripe merge straight into the dark orange breast and underparts. Additional features include a rufous area down the edge of the scapulars, next to blue-grey lesser coverts, and a paler browny-grey back, which is only weakly streaked. In addition, the dull brown rump is plain and unstreaked (Josh Jones / www.joshrjones.com). 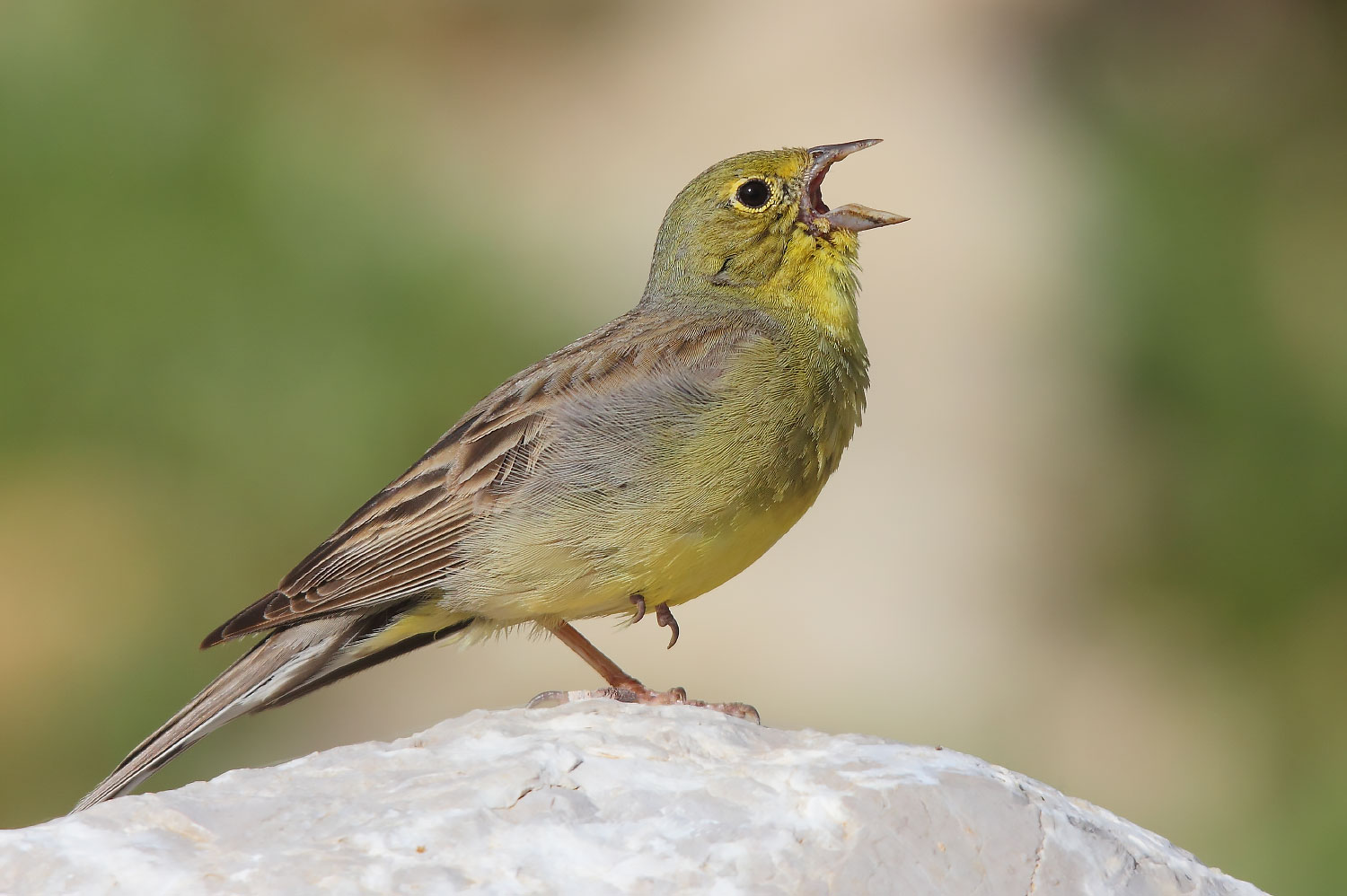 Adult Cinereous Bunting (Nemrut Dagi, Turkey, 24 May 2013). The final species in this quartet is a very striking and attractive bird but, unfortunately, one that seems highly unlikely to reach Britain. Cinereous Bunting is similar to the previous species in size and shape but, whereas the others have a mixture of greys and oranges, Cinereous Buntings are predominantly yellow and green. There are two subspecies: the nominate cineracia, which breeds in southern and western Turkey, and semenowi, which breeds in south-eastern Turkey eastwards into western Iran. The singing male shown in the photograph is of the yellower form semenowi (Carlos N G Bocos).