Working on a variety of offshore survey and construction vessels as a hydrographic surveyor regularly takes me to places few other birders can visit. The Shtokman field in the Barent's Sea north of Norway is one such place, and I was lucky to spend around four weeks there this autumn (19th September–12th October). Shtokman is a large gas field at approximately 73° north, 44° east and development is at the planning stage. 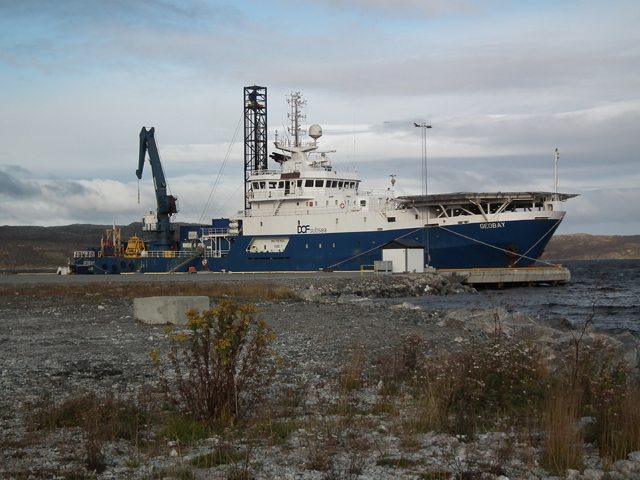 The job was a geotechnical survey which involved taking seabed samples. Therefore the vessel was stationary for much of the time, or moved only short distances between sample locations. In total there were three transits from the field to Kirkenes and back — something that gave the opportunity to cover more ground. Our base was Kirkenes — known to many tourists because the Hurtigruten, the famous Norwegian freight and passenger shipping line, stops there.

Despite a species list numbering only 23 species, I felt the trip was a roaring success. For most of the time there were lots of birds to be seen, which made sitting inside in front of a computer — the mainstay of my work onboard — somewhat frustrating. This was especially true during the first few days, when marauding flocks of one of my favourite species, Pomarine Skua, regularly surrounded the vessel. These loose flocks of up to 20 birds at a time beat up on the Kittiwakes in an almost casual manner, effortlessly sending the smaller gulls crashing into the sea. Some of the Poms even had a go at the much larger Glaucous Gulls — something that was new to me.

On a few occasions the Poms were quite vocal — calling to each other in what struck me as quite an effeminate voice for such a species. 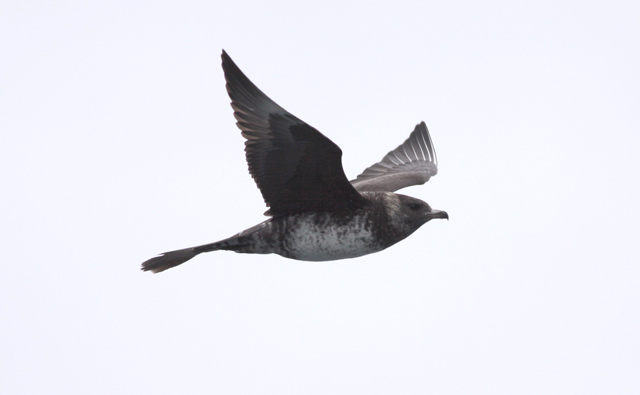 Pomarine Skuas were very common during the early part of the trip (photo: Julian Bell) 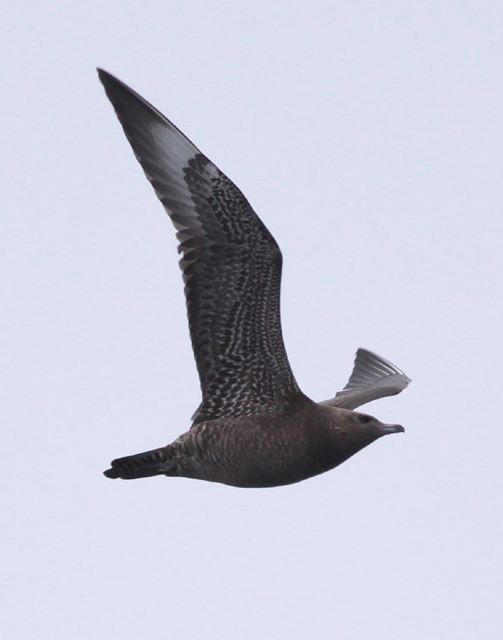 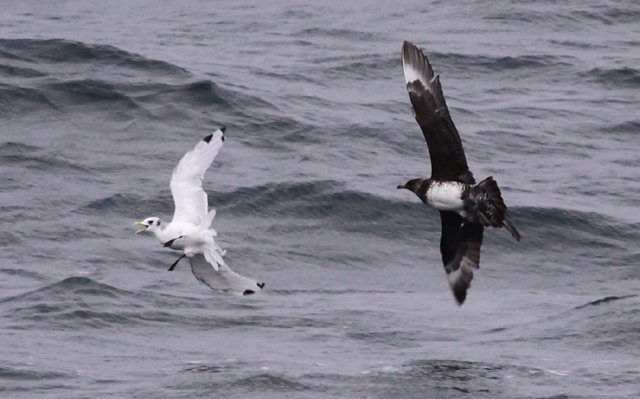 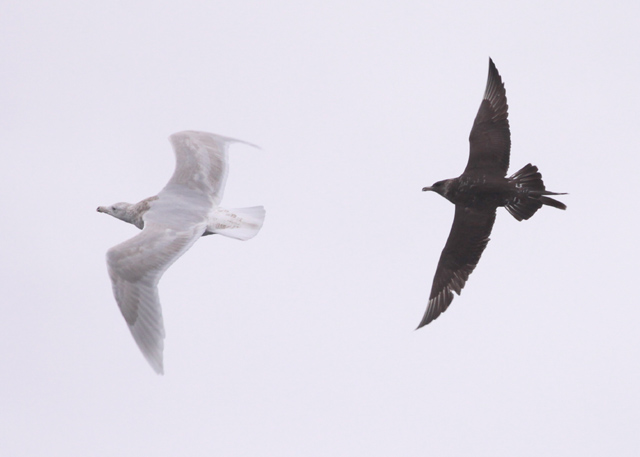 As time went by and things started settling into a routine it became easy to grab 10 minutes or so out on deck a few times a day. By this time the Pomarine Skua numbers had dropped dramatically and I only ever saw a few per day after the end of September. 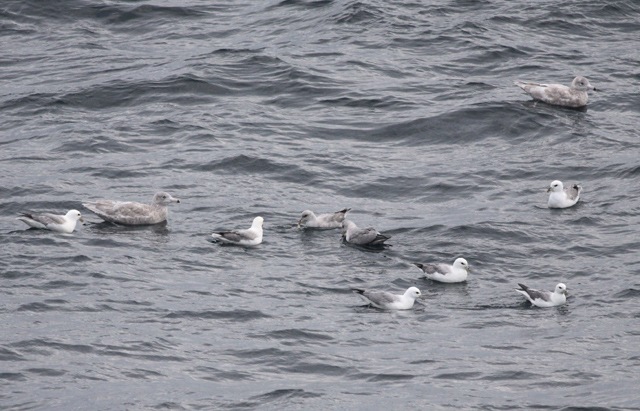 The basic fare consisted of Fulmars and Kittiwakes, with up to a few hundred of each almost daily. On a daily basis there were smaller numbers of Glaucous Gulls (rarely more than 20 at a time) and Brünnich's Guillemots (singles and small flocks regular). Glaucous Gull numbers often peaked in the late afternoon as the light was going. Although it was difficult to monitor accurately, it seemed as though the the Kittiwakes had a good breeding season somewhere, as there was a very high proportion of first-year birds. 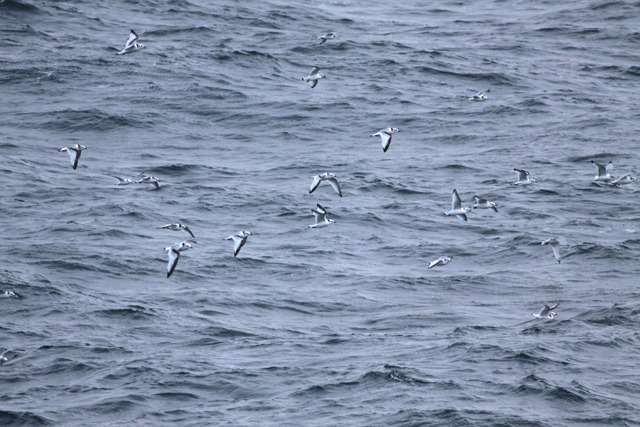 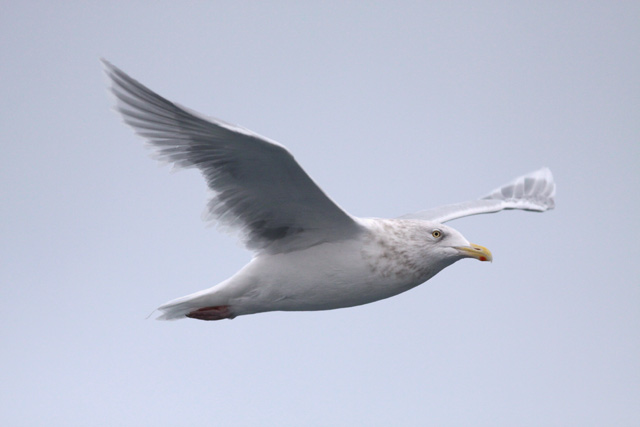 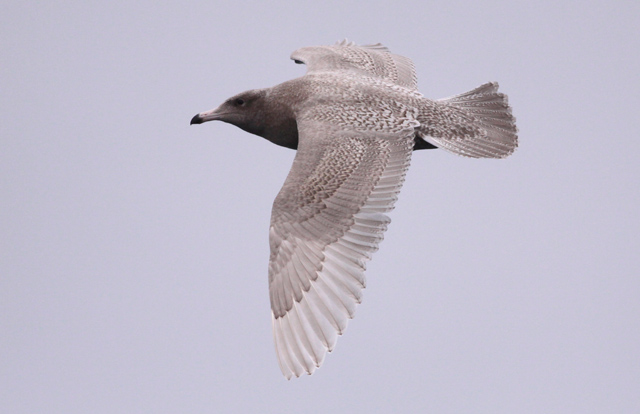 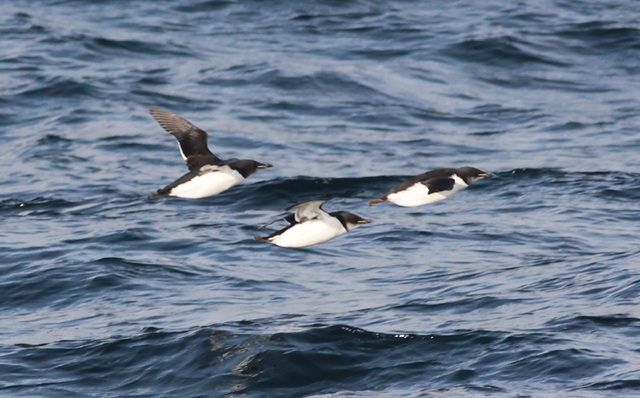 Many of the Fulmars were of the northern 'blue' variety and there were intermediate birds of all types. Much of the time they seemed to be just sitting around and on windy days flying. During the hours of darkness, flocks of up to a few hundred would gather around the vessel, feeding vigorously on some invisible prey that was attracted by the lights. During daytime the only prey I saw them take was jellyfish. 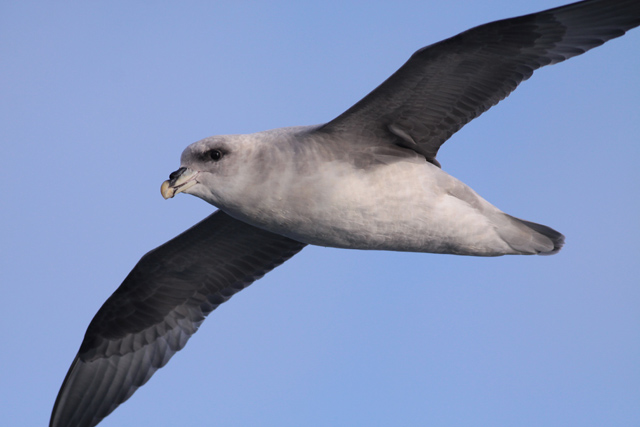 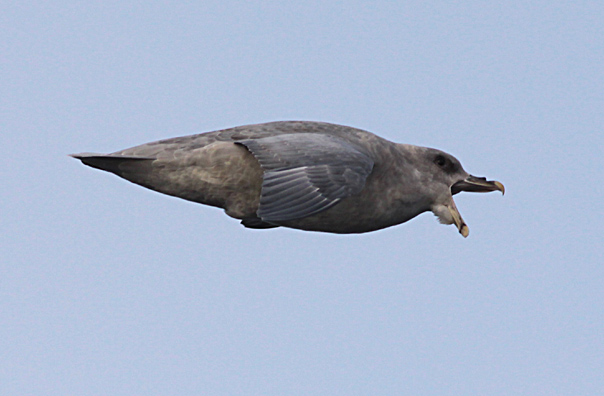 Blue Fulmar at the darker end of the scale (photo: Julian Bell) 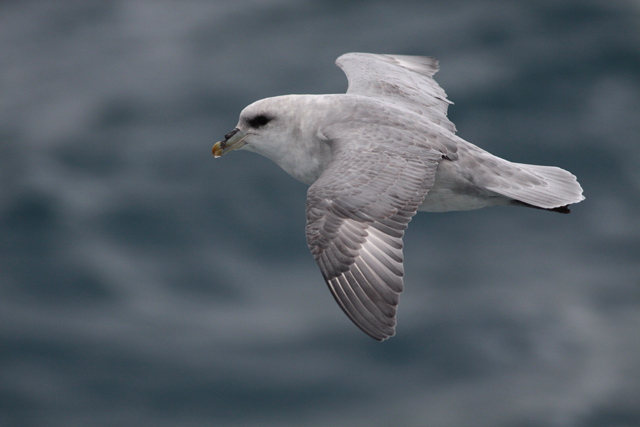 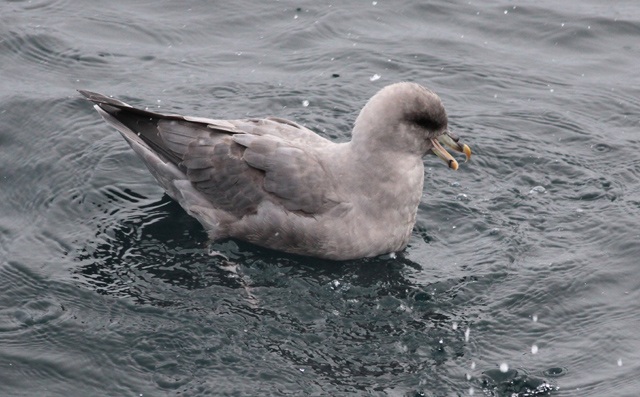 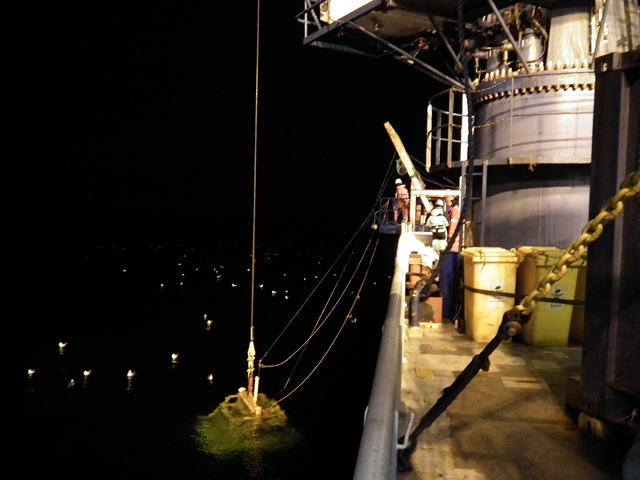 Fulmars feeding around the vessel at night (photo: Julian Bell) 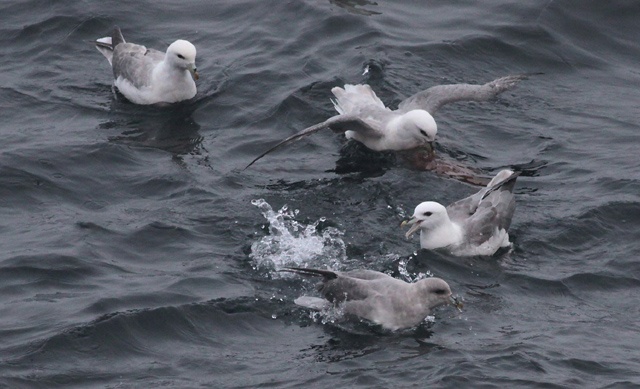 On occasion Brünnich's Guillemots would join these nocturnal feeding frenzies and would startle the feeding Fulmars as they suddenly surfaced.

Most mornings there were passerines to be seen, but these usually moved on very quickly after daybreak. This made both identification and photography rather difficult. Snow Buntings were all but daily, with numbers varying from a few birds to flocks in excess of 30. Unusually, they were often chased by Kittiwakes and another narrowly escaped the attentions of a couple of Pomarine Skuas. Onboard they favoured the open area of the helideck where flocks occasionally alighted briefly. 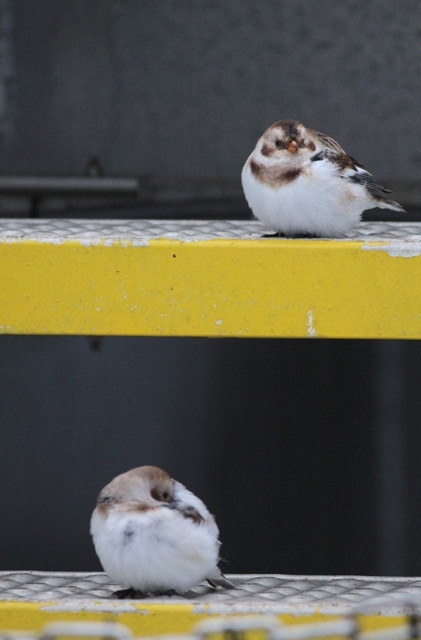 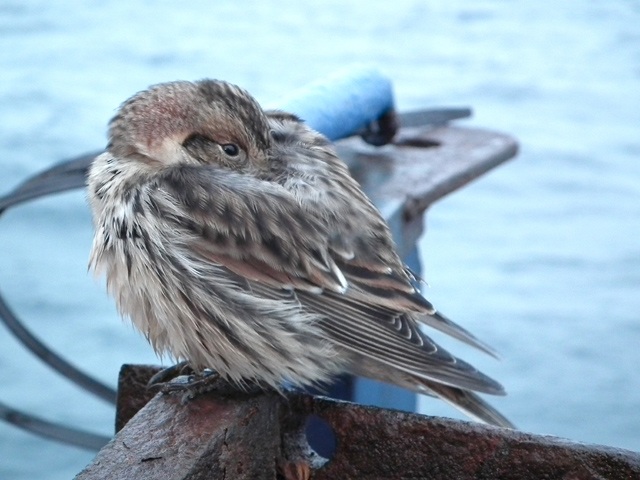 On 2nd October a small whitish passerine caught my eye which I initially assumed was going to be a Snow Bunting. Closer views quickly revealed that it was in fact an Arctic Redpoll showing characteristics of hornemanni. In the dull predawn light I alternated between taking flash photos on an automatic setting (giving 1/60th of a second) and upping the ISO setting to ridiculously high values. 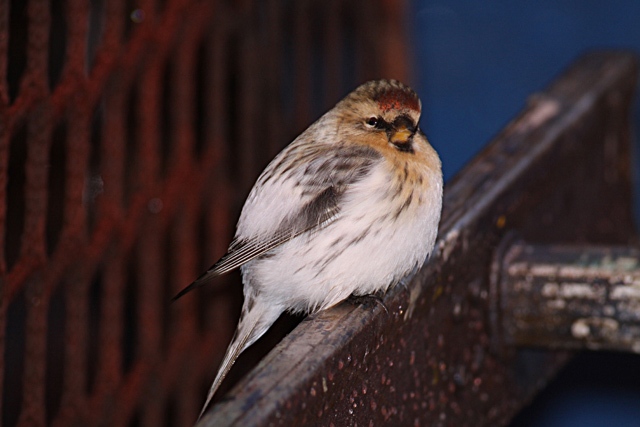 Lapland Bunting was the next most numerous passerine, being recorded on several dates. This species, together with Snow Bunting, Lesser Redpoll and Arctic Redpoll, were the only passerines I had expected to show up so far out to sea at these latitudes. Purple Sandpipers, another predictable species for the area, were also reasonably regular. 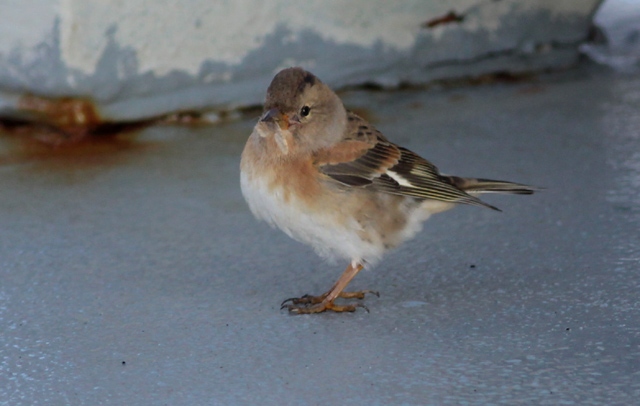 Another relatively predictable species — a Brambling eating a moth it found onboard (photo: Julian Bell) 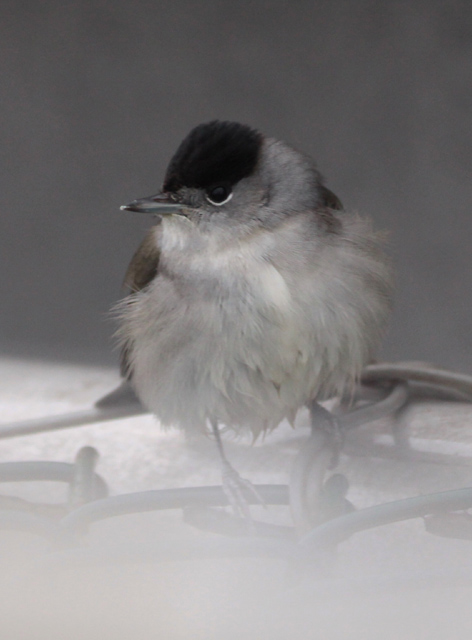 Surprise birds were Blackcap (on three occasions), Song Thrush, Turtle Dove, Barred Warbler and Robin (twice) onboard. A number of other passerines escaped identification as I did not have the time to follow them up and were gone by the time I next made it out on deck. Tantalisingly, one small Robin-sized bird had a neat row of white spots along the tips of its tail feathers... 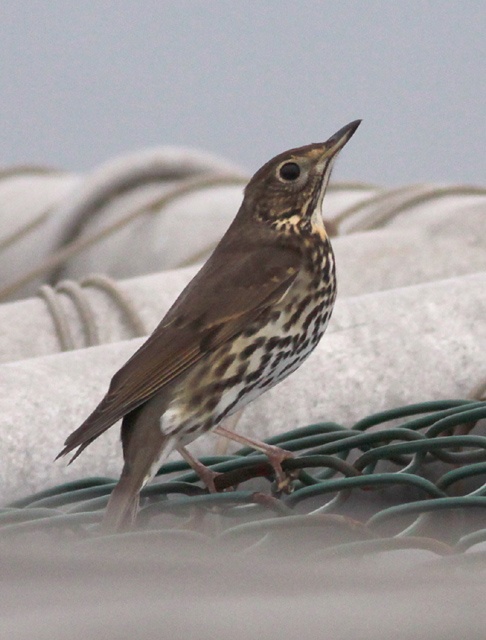 That migrants such as Barred Warbler and Turtle Dove should turn up so far north is indicative of the kinds of routes by which migrants turn up on the famous rarity islands around the north Atlantic. Surely none of these birds planned to end up so far off course.

Little Auks were unexpectedly scarce with just occasional fly-bys of ones and twos, and on one occasion a single bird joined in the nocturnal feed beside the vessel. Other seabirds were limited to a couple of Sooty Shearwaters on 19th September, a single Puffin and a group of four Long-tailed Ducks. Other gulls were limited to small numbers of Herring and Great Black-backed Gulls, largely during the first few days of the project.

As the Shtokman field is at the very early stages of its development I am pretty sure this won't be my last trip to this fascinating area. Watch this space... 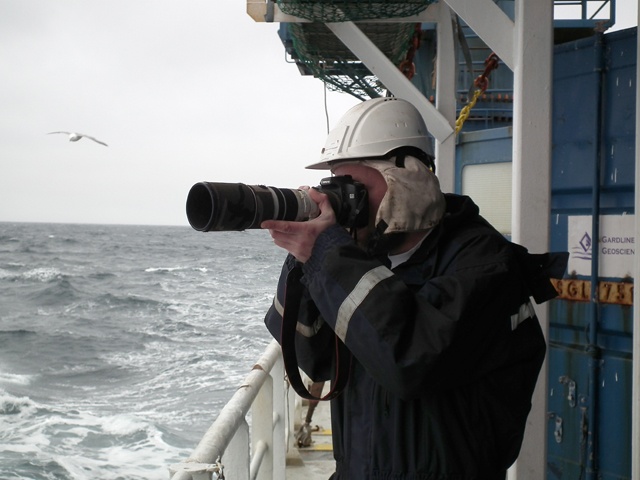