COAL Tit is a familiar garden, park and woodland bird, generally associated with conifers. However, this changes in autumn and winter, when our own birds wander and the nominate subspecies from Continental Europe can also be found in Britain in small but probably underestimated numbers.

British Coal Tit Periparus ater britannicus is the default form even at migration watchpoints, though it rarely moves more than 50 miles from its birthplace. With wide white cheek patches on an otherwise black head, it resembles a Great Tit to a degree, but is smaller with a duller olive mantle and back, white nape patch, double white wing-bars on grey-brown wings, white tips to its tertials, a grey-brown tail, and sullied dull buff underparts with darker flanks. The bare parts are dark grey. It is this overall ‘dirty’ impression that gives the species its English name.

The differences between the two subspecies are largely in the back, mantle and scapular colour. In the Continental subspecies P a ater, which turns up as a scarce migrant on an annual basis, the olive-tinged brown of British is replaced by a cold lead-grey, which can stand out well and from some distance in good light. Continental is also a little larger, has comparatively plain pale yellowy-grey underparts, concolorous with the flanks, larger white cheeks and black bib, and a wider nape patch. The back of the black head feathers in this subspecies can be raised as a tiny crest.

P a hibernicus, the sedentary Irish subspecies, is very distinctive, with pale yellow cheeks and underparts, along with a paler rump and heftier-looking beak and a wider bib in the male. This form has turned up as a short-distance rare vagrant on the south-west coast of Britain.

Calls are similar to Great Tit, but higher pitched, thinner, broader in tonal sweep and sometimes containing more notes. Little is known about the variation of vocalisations between the different subspecies.

Continental Coal Tit can turn up anywhere, and any birds found where they don’t usually occur should be examined for features of this form. 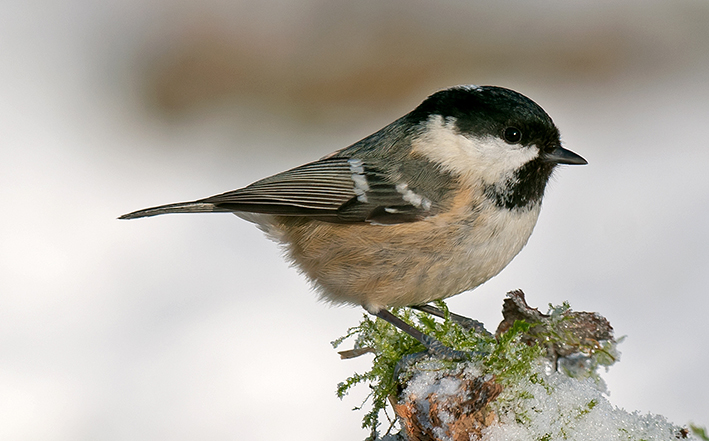 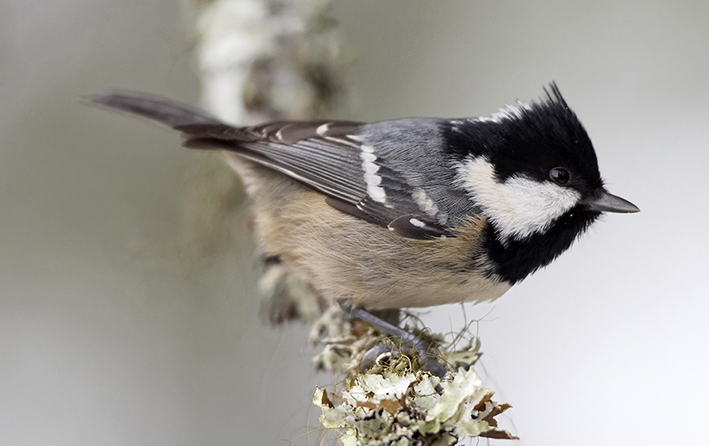 Continental Coal Tit (Haukipudas, Finland, 19 October 2007). The lead-grey mantle
is obvious on this bird, but note the small crest as well.
Photo by Markus Varesvuo (www.birdphoto.fi).
Content continues after advertisements
Login to leave a comment
Return to List