New research, published in the Journal of Ornithology, has confirmed the identification of three different Elegant Terns (Thalasseus elegans) in Europe beyond all doubt.

The occurrence of Elegant Tern in Western Europe has long been suspected. Birds fitting the perceived 'classic Elegant' phenotype, by possessing features such as a white rump and a long, richly bicoloured bill, have been documented in the region since the 1970s.

Doubts regarding the identification of these birds have always lingered. The presence of multiple individuals of a species that breeds only on the Pacific coast of North America would be unprecedented in Europe. Given that Lesser Crested Tern has been known to hybridise with Sandwich Tern in Europe on numerous occasions, and considering the possibility that the orange-billed Royal Tern could potentially do the same, there has always been some suspicion that these 'Elegant-type' birds could be hybrids or backcrosses. This notion has been reinforced by some of the Elegant Tern claims involving what European birders perceive to be a less 'classic' phenotype for the species, with shorter and more uniform-coloured yellow-orange bills. Additionally, given how freely these 'Elegant-type' birds have formed mixed pairings with Sandwich Tern populations over the past 30 years, the possibility of hybrids between Elegant and Sandwich Tern causing identifications problems has also never been far from birders' minds.

The DNA of three individual 'Elegant-type' terns was analysed using a method known as multilocus barcoding (see below), revealing that each individual matched the DNA of pure Elegant Tern. The new findings generate a huge shift in understanding of the occurrence of Elegant Tern in Western Europe — previous methods had failed to rule out the possibility of mixed parentage.

To rule out the possibility that the studied birds are hybrids, Dufour et al. have used 'multilocus barcoding' relying on several nuclear genes; these genes are in the cell nucleus, make up the huge majority of our genome, and are passed equally by males and females: we all have on average 50 per cent of our nuclear genes coming from our mother and 50 per cent from our father. These genes are not commonly used for identification of individual birds because there is no comprehensive data base containing DNA sequences of most avian species as is the case for some mitochondrial genes. The first step in using these genes on Elegant candidates was thus to sequence multiple genes in multiple individuals of all candidate parent species (Elegant, Sandwich, Cabot's, Lesser Crested, Greater Crested and Royal Tern) to find several genes with diagnostic differences between all these species. Once these diagnostic genes had been identified, they were used to determine the genetic parentage of the three Elegant-type birds.

The findings, which show that three pure Elegant Terns have been seen in Europe in every year from 2002–15, suggest that any orange-billed tern resembling Elegant Tern in Western Europe is most likely to be just that, rather than another hybrid or backcross option, unless there are plumage or bare-part irregularities that argue against such identification. This is strengthened by the phenotype of two different hybrid youngsters, raised by one of the genotyped male Elegant Terns and a female Sandwich Tern, colour-ringed before fledging and photographed as adults — both look similar to Sandwich Tern, with orange spots on the dark bill and a more extensive yellow bill tip (J Gernigon et al.; pers. obs.), rather than resembling Elegant.

This in turn will likely have a big impact on the way national records committees treat records of 'Elegant-type' terns. Indeed the BBRC, which is currently holding all records of apparent Elegant Terns because of past research concluding that hybrid parentage could not be ruled out for the studied European birds, will now begin to assess British occurrences in the normal way. At this stage it is worth pointing out that none of the three ringed (and DNA-sequenced) birds have yet been recorded in either Britain or Ireland but, given the new evidence, there currently appears to be no reason why any bird that looks like (and therefore can be identified as) an Elegant Tern should not be accepted as that species.

A history of the three sampled birds

Bird A has been seen in France and Spain, but has spent much of its time in the latter country. It was seen for the first time and ringed (with metal ring 4 101218; MIN. MEDIO AMB. ICONA MADRID) on 8 October 2002 at Marismas del Odiel, Huelva, Spain (M Vázquez) as a Lesser Crested Tern.

In the 2004–05 breeding seasons it was seen in the tern colony on the Ebro Delta (see here). In 2006, the bird was paired with a Sandwich Tern in the tern colony at L'Albufera, Valencia. The bird, and its chick, were caught on 2 June 2006 and both were sampled. The adult was sexed as a male on its behaviour and a plastic yellow ring was added on the left tarsus. The hybrid chick born in 2006 was ringed with a metal ring (4 123877; MIN. MEDIO AMB. ICONA MADRID) on the right tarsus and two plastic rings (yellow above, blue below) on the left tarsus (Dies et al. 2006).

In 2008 bird A was seen in the tern colony at Salins de Bagnas, Hérault (southern France) from 29 July to 2 August (X Rufray); it was paired with a Sandwich Tern and had at least one chick before the colony was abandoned. In 2010 it paired with a Sandwich Tern at L'Albufera and succeeded in raising a hybrid chick that was ringed with a metal ring (4 133254; MIN. MEDIO AMB. ICONA MADRID). Until 2016, the bird (which lost its yellow plastic ring after the 2012 season) was again seen in the L'Albufera tern colony, where it regularly produced chicks. From 2009–16 it has paired annually with another 'orange-billed' tern. Given that the second bird also looks a classic Elegant Tern, it seems probable that a pure pair of Elegant Terns has been breeding in Europe in recent years. 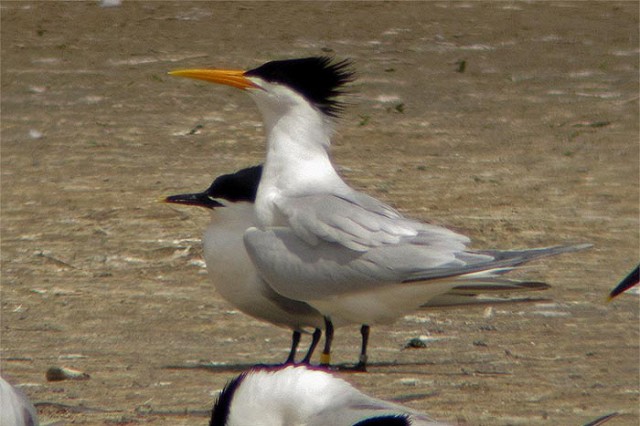 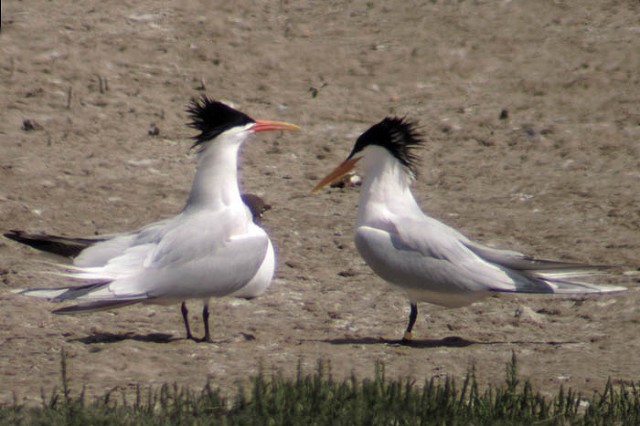 Bird B has been seen in France, but only during the breeding period and principally at two sites — the tern colonies at Réserve Naturelle du Banc d'Arguin in Arcachon Bay, La Teste-de-Buch, and Polder de Sébastopol on Noirmoutier Island, Barbâtre. It was caught at Banc d'Arguin on 18 June 2007 when it was sampled and ringed with a single metal ring (GE35956, Museum Paris) on the right tibia and three plastic rings — one white on the right tarsus and white above red on the left tarsus (J Gernigon). This bird, sexed as a male, has attempted to breed with a Sandwich Tern at both colonies; for example two chicks in 2010 were killed by a Black Kite (J Gernigon). The bird has raised several chicks but few have been ringed. Since 2008, this individual has been seen annually at Noirmoutier Island during the breeding season.

It lost the white ring on the right tarsus some time between the 2012 and 2013 breeding seasons but a new one was added when the bird was caught again on 15 June 2013, when a new sample was also taken. Both white plastic rings were lost between the 2015 and 2016 breeding seasons. This year, the bird is still at the Noirmoutier colony, where it is once again paired with a Sandwich Tern and is raising a hybrid chick — which was caught, ringed and DNA-sampled in late June (J Gernigon). Outside of France, this individual was recorded twice in Namibia in January 2013, both times at the BirdLife Data Zone at Mile 4 saltworks (Mark Boorman).

A series of sightings in 2001 (at the Banc d'Arguin colony) and then every year from 2003–07 at different sites along the French Atlantic coast probably refer to bird B before it was ringed. 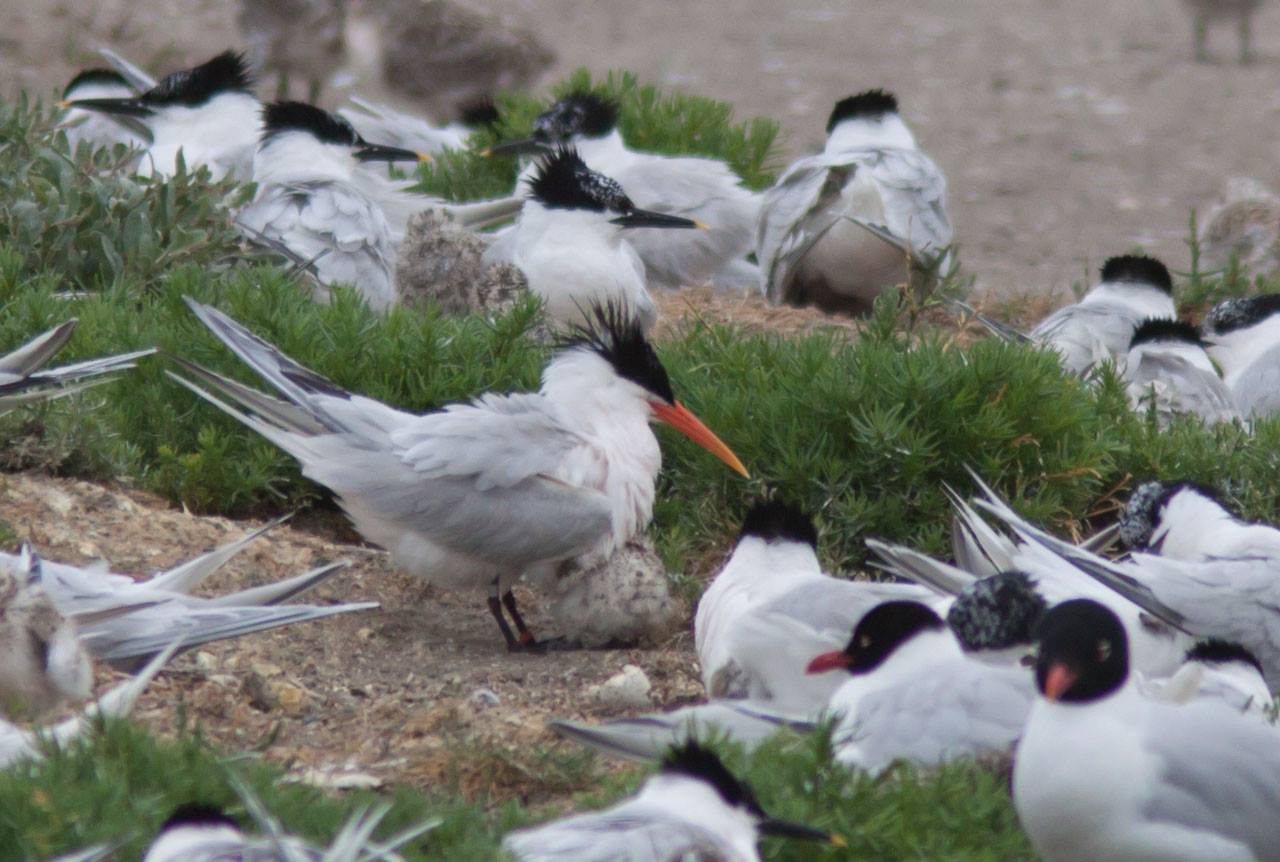 Bird C has also been seen only in France during the breeding season, and primarily at Banc d'Arguin. The first sighting of this bird came on the reserve in 2002; it was caught on 3 July 2003 and fitted with a metal ring (FT67249) on the right tibia and with three plastic rings — one white on the right tarsus, and green above yellow on the left tarsus (J Gernigon). The bird, identified as a male by behaviour, bred with a Sandwich Tern for several years (2005–07, 2009, 2010, 2013) in the Banc d'Arguin colony, but also on one or two occasions in the Noirmoutier colony. Bird C has also been seen once in winter — close to Cape Town, South Africa, on 1 January 2007 (Tony Tree). Though it was ringed a long time ago, further sightings are otherwise sparse — though this is probably because of its choice of the inaccessible Banc d'Arguin as a breeding site and because it has also long been considered a hybrid because of its perceived less 'classic' appearance.

Most of bird C's chicks were ringed, but only two have been seen subsequently as adults. One (yellow/green, born in 2003) was seen at Banc d'Arguin in 2005, 2007, 2013 and again in 2016. A second hybrid was seen in 2016 — a bird with blue/yellow rings, born in 2007. As the photos below demonstrate, the phenotype of these hybrids is clearly different from elegans, resembling sandvicensis much more closely. 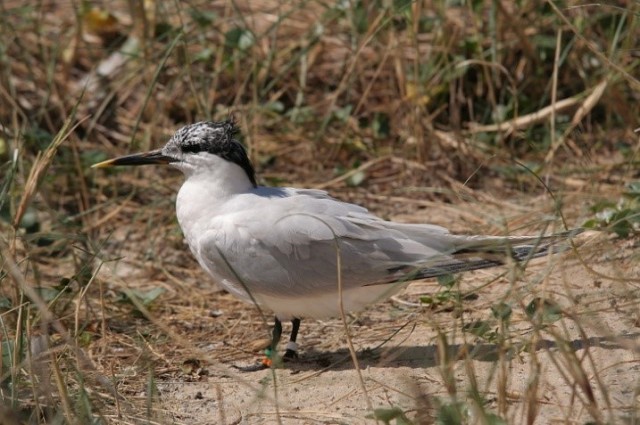 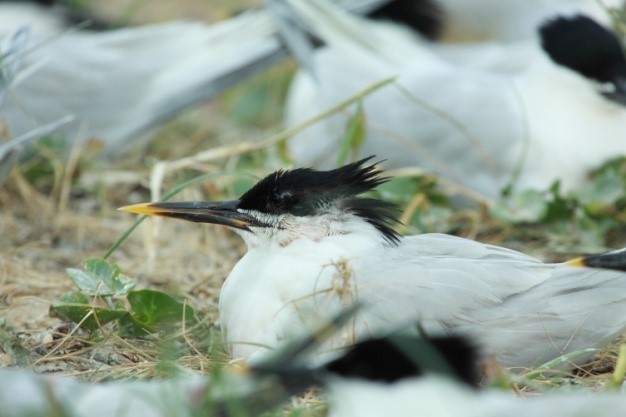 Several 'Elegant-type' Terns have been recorded in Britain and Ireland since the first in 1982. The Irish Rare Birds Committee (IRBC) has actually already accepted five records of Elegant Tern:

A sixth record, concerning an adult at Beale Strand, Co Kerry, from 13–24 September 2013, is yet to be formally accepted but falls comfortably within the range of Elegant Tern in terms of appearance. 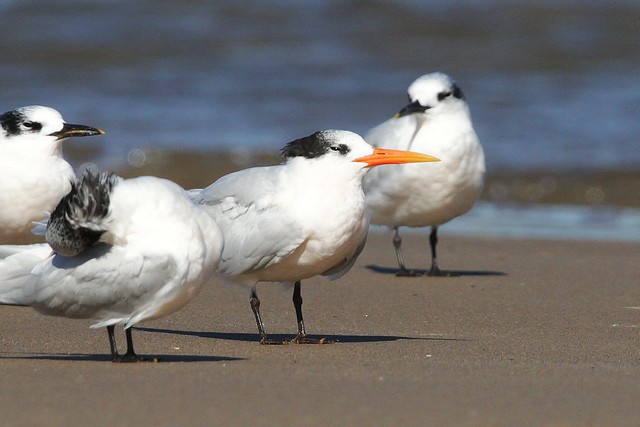 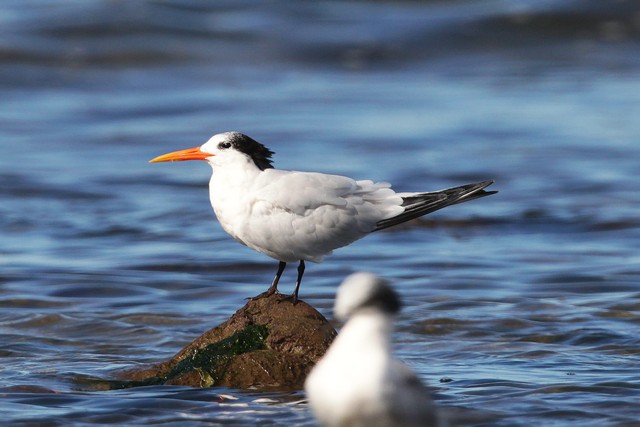 There are currently no accepted records of Elegant Tern in Britain, although three candidates, fitting the accepted phenotype of elegans, have been recorded and are currently being held by the BBRC: 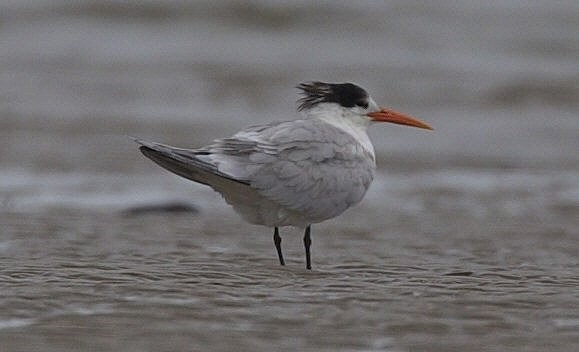 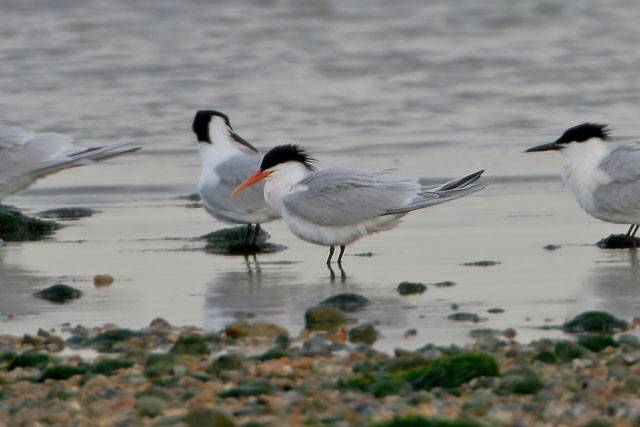 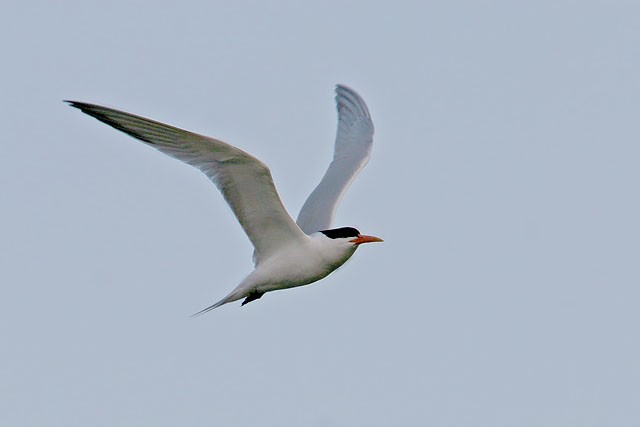 At least two unringed birds have been seen regularly in Spain and in France in recent years but more research is needed to understand how many unringed birds currently reside in Western Europe. Photos of two different unringed birds are shown below. 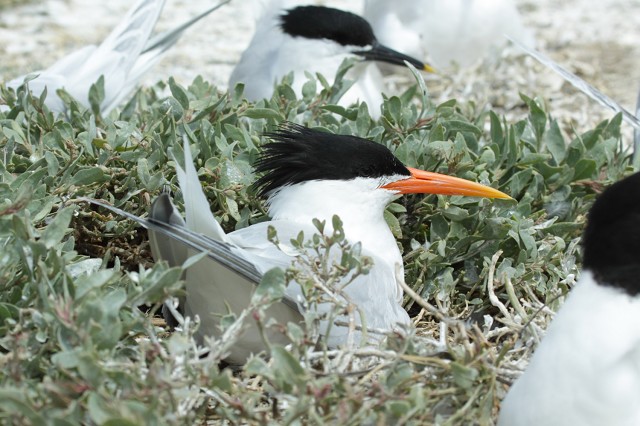 Adult apparent Elegant Tern, Barbâtre, Vendée, France, 31 May 2015. This individual was seen annually in the colony from 2013–15, often alongside bird B (Photo: Julien Gernigon).

As alluded to, European birders have traditionally not fully appreciated the considerable variation in bill shape, structure and colour that Elegant Tern can show. The perceived 'classic' Elegant Tern phenotype depicts a bird with a long, slightly decurved orange bill, richest in colour at the base and paling to a yellowish colour towards the tip. However, as photographs of birds taken in their core summer range of California show, only a proportion of adults actually match this appearance. A significant number show a paler, concolorous yellow-orange colour while length and structure also varies — some show shorter, straighter bills.

A selection of photographs of adult Elegant Terns, taken in Northern California in August 2012, is presented below. 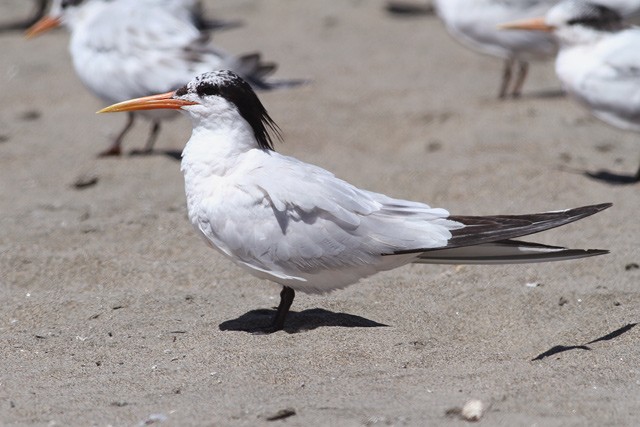 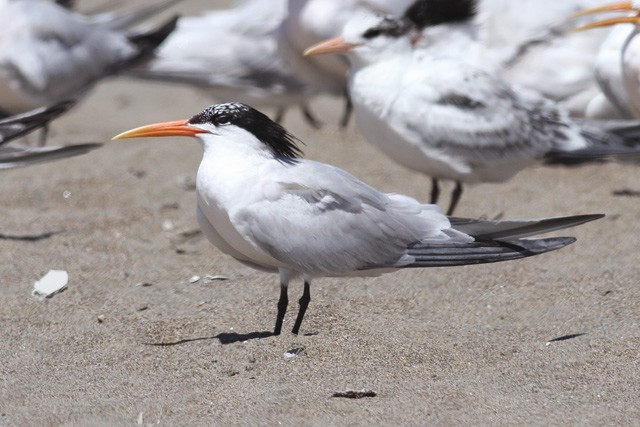 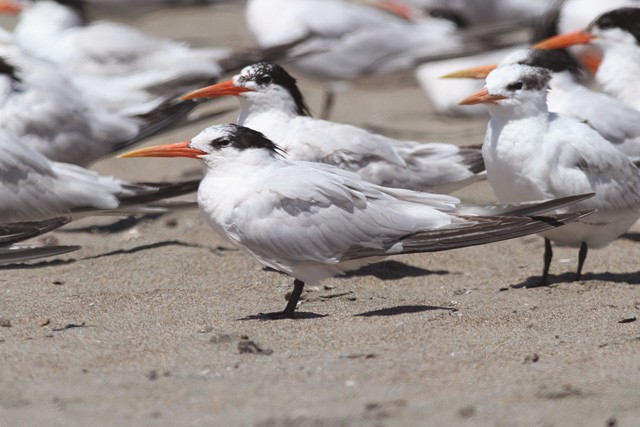 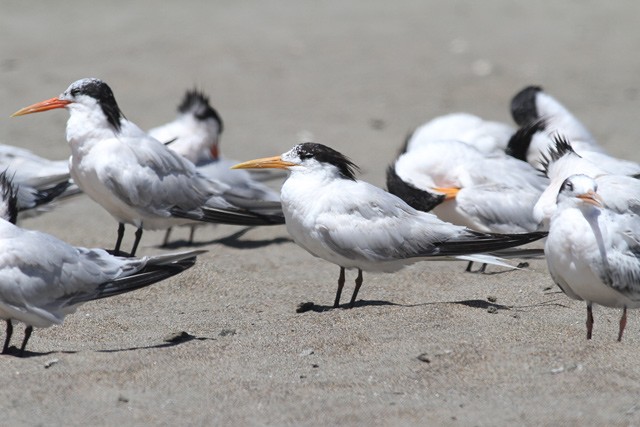 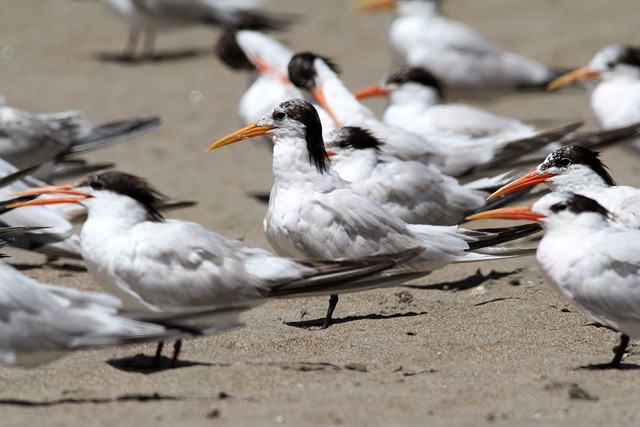 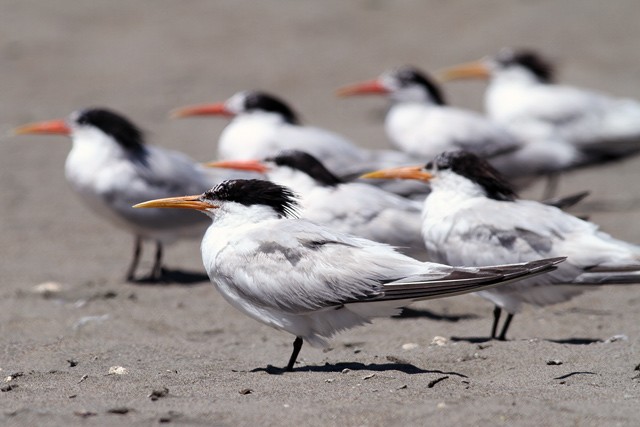 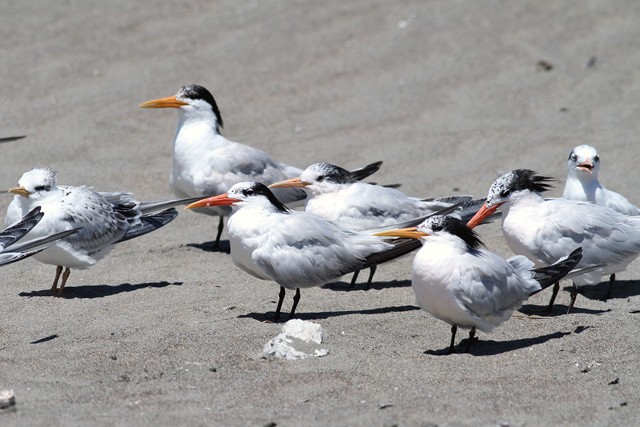 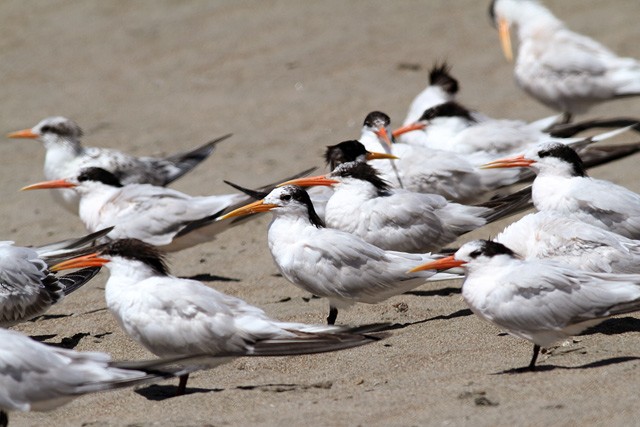 Special thanks to José Ignacio Dies and Julien Gernigon for their help in providing a detailed history for each of the three Elegant Terns, to Xavier Rufray, Edouard Dansette and Joachim Bertrands for providing photos of the European birds, and to Richard Bonser for allowing use of his Californian Elegant Tern photographs.