Mediterranean Gull is a real patchwatcher’s prize, and the pale and masked winter adults and second-winters are easily spotted. First-winters are less distinctive, though – particularly in flight – and a more analytical eye is needed to distinguish the species from its far more common congener, Common Gull.

‘On the deck’, the species are somewhat dissimilar, with Mediterranean having the same dark ‘fan’ of a mask as older birds behind the ear coverts and up onto the rear crown, a dark bill and legs, pale grey upperparts and white underparts, along with less retained juvenile feathering on the coverts and tertials.

It is once a bird spreads its wings that confusion begins. Both species have a more or less white rump and tail base with a black sub-terminal band to the tail, and mostly black outer wing with a grey panel on the median coverts on the inner wing.

However, with practice, several details will make a ‘Med’ stand out: the rump is an unmarked pure white and the black tail band noticeably narrower; the back and wing panel are paler grey, while the grey ‘window’ on the inner primaries extends out into the outer wing as streaky white ‘mirrors’ towards the end of all but the last two primaries, unlike Common Gull’s discrete window. The upperparts of a Mediterranean, then, are much more contrasting and the species does not have the pale rusty tinge on the forewing of Common, nor the scattering of brown spots on the uppertail and rump.

The underparts of Common are variably scaled and the underwing coarsely marked, while Mediterranean has an unmarked underwing apart from a dark trailing edge and border to the outer wing, all adding to its ‘contrasty’, cleaner, more monochrome appearance. Bear these differences in mind and when that prodigal ‘Med’ flies over with a group of passing Commons, you will add it to your patch list with confidence. 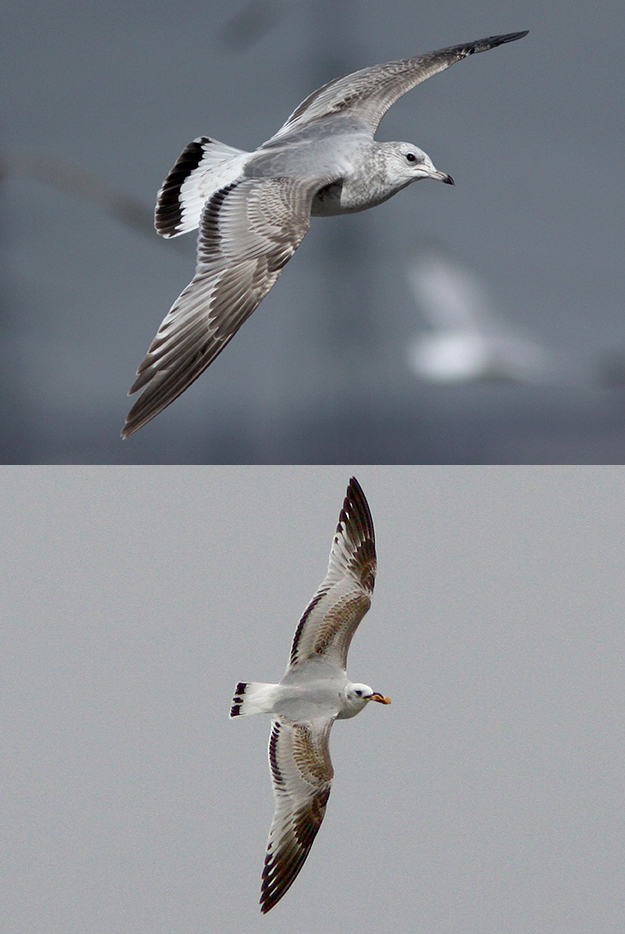 Top: first-winter Common Gull (Rainham Marshes, Greater London/Essex,
11 March 2011). Note the dirty grey and scaly head and chest, as well as the broad
black tail band. Above: first-winter Mediterranean Gull (Southend on Sea, Essex,
20 September 2009). This bird is much cleaner, with a bit of the mask showing, as well
as small pale subterminal streaks on the primaries and a thinner tail band.
Photos by Dominic Mitchell (www.birdingetc.com).
Content continues after advertisements
Login to leave a comment
Return to List