Fifty years ago, two young birders stumbled upon a tiny patch of woodland at the northern end of Druridge Bay, Northumberland, and found it, in their own words, 'carpeted with Blackbirds'. A scattering of Fieldfares, Redwings and other northern migrants were also present, busily searching the leaf litter for food after their North Sea crossing.

Brian Little and Bryan Galloway, both recently qualified ringers, were looking for somewhere to set up a coastal ringing station within reasonable travelling distance of Tyneside. The owner enthusiastically agreed to them building their first Heligoland trap and the fledgling Northumbria Ringing Group (NRG) made the station at Low Hauxley their base. They first operated from the local village hall alongside the wood before a ringing hut and other facilities were built. The owner later gifted the wood to the group. 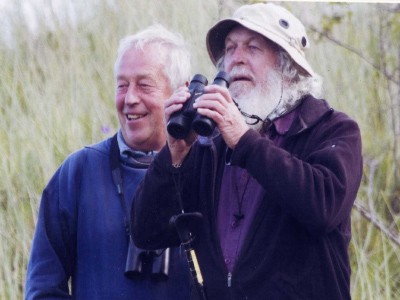 During the 1970s the entire hinterland of Low Hauxley became a giant opencast coal operation, leaving the wood and village as a tiny green oasis in a bleak moonscape — and all the more attractive to tired migrants seeking food and shelter. When opencast operations ended the land was restored for farming, a nature reserve and a coastal caravan park.

Since setting up its base in the wood the group has ringed more than 323,000 birds of 212 species, over 77,000 of them at Low Hauxley. Brian and Bryan, now both in their seventies, are still enthusiastic members of the group: Brian is chairman and Bryan is secretary. Away from Low Hauxley, the group has carried out Britain's longest-running continuous study of Merlin in the Northumberland uplands. More than 3,600 chicks were ringed up to the end of 2012 and much of what is known about the breeding ecology of our smallest falcon results from these studies.

Other very long-running projects have involved Tawny Owls in Kielder Forest and Pied Flycatchers in the oak woods of west Northumberland. The group also pioneered the very adventurous ringing of Goosanders by adapting mist nets to fix across rivers. This activity sometimes involved ringers being left literally out of their depth and having to swim. More recently, the group has been responsible for ringing the country's most important breeding colony of Roseate Terns on Coquet Island, just off Low Hauxley. It has also undertaken responsibility for new colonist species for Northumberland including Marsh Harriers, Ospreys, Red Kites and Avocets.

Now the first 50 years of the group has been marked with a lavish 119-page publication. Apart from the history, it provides totals for all species handled over the period and accounts of 20 key species in which the group has been involved for most of its existence. These include Barn Owl, Common Sandpiper, Dipper, Grey Heron, Kestrel, Pied Flycatcher, Reed Warbler, Robin, Sedge Warbler, Siskin, Sparrowhawk, European Storm-petrel and Swallow. The species write-ups, most of them illustrated with members' photographs, contain much previously unpublished data. 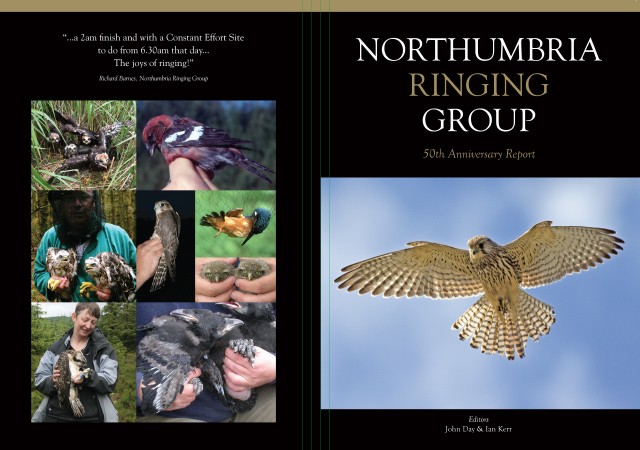 The front and back covers of the report

Members were encouraged to include the odd anecdote from ringing expeditions. These include a gem from a small boy watching with friends as young Kestrels were ringed from a nest in a church on North Tyneside. He excitedly told them that Kestrels were birds of 'pray' because they nested in churches.

On a more serious note, the book also has a very impressive list of the papers from members that have appeared in national publications such as British Birds and, locally, in various county bird and other reports. The book is now available at £12 (which includes p&p) from Bryan Galloway, 34 West Meadows, Westerhope, Newcastle upon Tyne, NE5 1LS. Cheques should be made payable to the Northumbria Ringing Group.