You don't necessarily need to have a taste for Alpine adventure to go birding in Austria in winter but that's where our story begins. Tucked away in a picturesque corner of the Tyrol, Swarovski Optik's innovation centre opened its doors last month to leading members of the world's birding press and optics specialists in what transpired to be a revelation in advanced optics technology.

The unveiling of the Austrian manufacturer's new BTX binocular spotting scope took place on a mountainside against a dramatic backdrop of snow-covered peaks and pine forest. Forged on the anvil of optical excellence, the BTX aims to set new standards in comfort, ergonomics and practicality in the way we view birds and other forms of wildlife. Using both eyes to view an image through a telescope is set to add a new dimension to our enjoyment of birding.

The concept is, of course, nothing new. For several years, now, a handful of astronomical telescope manufacturers and at least one spotting scope manufacturer have produced similar products, some of which act as a platform for interchangeable eyepieces. What is new, however, is the refreshingly different approach to design and functionality, which incorporates a forehead rest for prolonged viewing and a starpoint aiming aid to line up the scope and hone in quickly on distant objects.

The BTX is essentially an 'eyepiece' module which is compatible with the existing range of 65 mm, 85 mm and 95 mm ATX telescope objective modules. To get the full measure of the potential benefits delivered by the BTX, two full days included intensive field-testing, as well as delving deeply into the design concept from drawing board, through production, to the final delivery of the finished product. 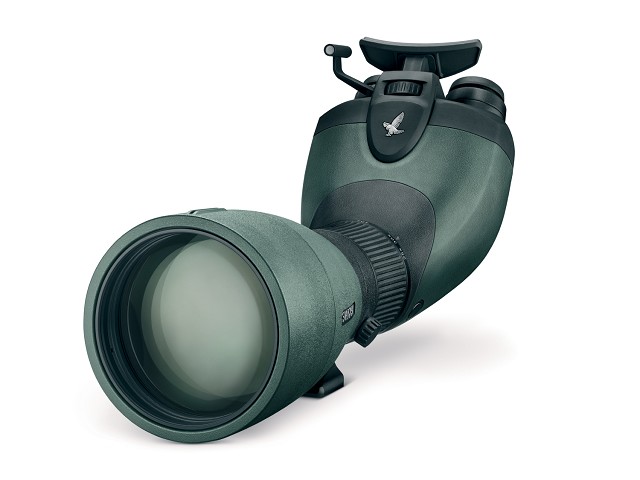 Following a short spell of Alpine birding, the test venue switched to Lake Constance, where a more prolonged spell of critical evaluation took place in the field. The area provided an ideal location — in mainly overcast conditions — to put the BTX through its paces alongside the ATX for comparison. I was soon to discover the high comfort factor of the BTX quickly led me to abandon using the conventional, single eyepiece telescope which, as we all know produces eye-strain and discomfort as a result of squinting for long periods. Two eyes, as the old adage goes, are most certainly better than one! After familiarising myself with the equipment, I found it easy to simply hold the binocular module with two hands and pan and tilt while the tripod took the weight of the scope.

The eyepieces have two ventral fins which allow the interpupillary distance to be easily adjusted and, as the eyepieces operate simultaneously, the system always remains centred. The eyecups twist out, as would be expected, and the single-eye focussing adjustment is mounted on the right ocular.

As well as small numbers of Caspian and Yellow-legged Gulls and, surprisingly, a few Velvet Scoters and Long-tailed Ducks, Lake Constance held thousands of wintering wildfowl, including one raft of some 1,800 Red-crested Pochards. These provided a focus for assessing colour, contrast and sharpness, all of which did not, of course, disappoint. In direct comparison with the ATX, the BTX's image appeared marginally less bright. 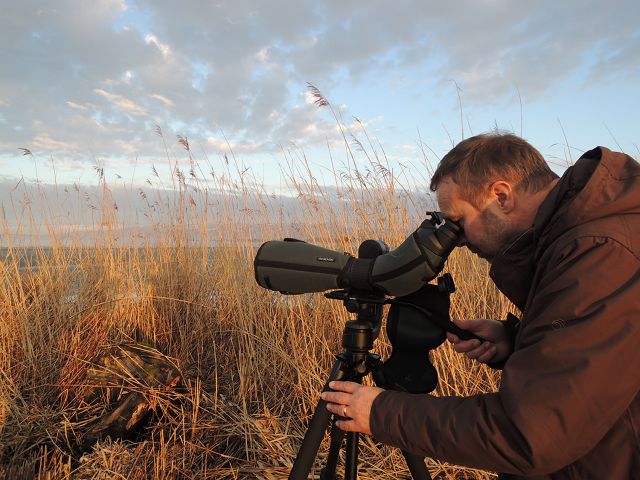 Mike tries out the new BTX at Lake Constance, Austria.

The value of the BTX lies in its ergonomics, binocular vision and the delivery of maximum comfort during its use. It should be noted that the magnification is fixed at either 35×, when used with a 95 mm ATX objective module, or 30× when in use with both 85 mm and 65 mm modules. There is no zoom functionality as this would have made the resulting combination both too long and too heavy, as well as bumping up the cost. However, a rapidly applied 1.7× extender is available to boost the magnification to 60× and 50× respectively.

The BTX is impressive and will clearly appeal to those who already own an ATX modular setup. A full review will be published in Birdwatch in due course.