Data collected by thousands of Wetland Bird Survey (WeBS) volunteers has just been published, showing the importance of the UK's wetlands for millions of wintering waterbirds.

Key wetland sites are located right across the country, providing a wide range of waterbirds with a safe and resource-rich environment. Many of these important sites have been designated as Special Protected Areas (SPAs) under the European Commission's Birds Directive, which came into force in 1979. The volunteer-collected data from WeBS are used to inform these designations.

The latest WeBS report draws attention to declining population trends of some familiar waterbirds, including Mallard and Shelduck. Although Mallard is still a regular sight on inland and coastal wetlands, numbers have declined by 39 per cent at sites monitored by WeBS since the mid-1980s.

Similarly, Shelduck — which lives on coastal habitats outside the breeding season — has dropped by 23 per cent over the same period, with an especially marked decline in the last four years. 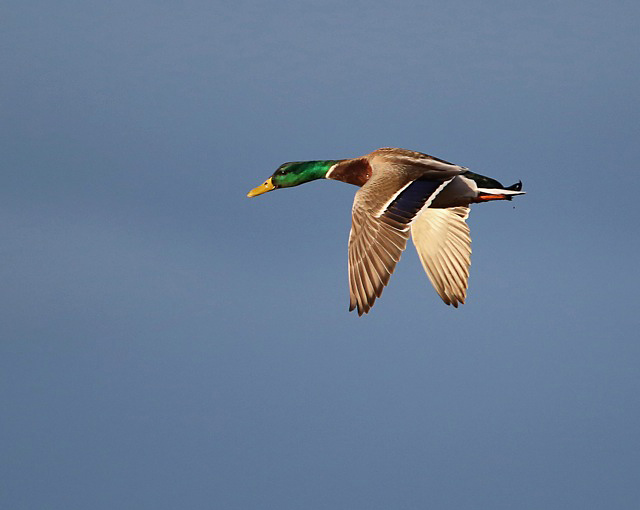 Though still a familiar sight, Mallard has declined by almost 40 per cent since the mid-1980s (Photo: Antony Ward)

The reasons behind these declines are unclear and likely to be complex. However, the population changes have occurred against a backdrop of climate-driven shifts in distribution of other waterbirds such as Smew. The changing climate may therefore be affecting Mallard and Shelduck too, and understanding this is vital for an appropriate conservation response.

Many familiar coastal waders, such as Dunlin, Ringed Plover, Eurasian Curlew and Common Redshank, have also declined in recent decades, although some others, such as Avocet and Black-tailed Godwit, have increased. The wintering populations of the latter two species have increased by 58 per cent and 49 per cent respectively over the past 10 years. SPAs in southern Britain, such as the Exe Estuary and Poole Harbour, have proved particularly important for Avocet.

The WeBS report, published annually as a paper report and also available as an interactive online interface, makes information readily accessible to anyone interested in birds and the environment. The latest report, Waterbirds in the UK 2013/14, covers the period up to June 2014.

Chas Holt, WeBS Co-ordinator at the British Trust for Ornithology, said: "In 2013-14, WeBS volunteers contributed thousands of hours to help monitor the UK's internationally important wintering waterbirds. The data collected are used to assess the size of waterbird populations, determine trends in numbers and distribution, and assess the importance of individual sites for waterbirds, in line with the requirements of international conservation conventions and directives. None of this would have been possible without the efforts of the 3,100 volunteers who have given so freely of their time and enthusiasm."