Nesting birds turn the clocks back 50 years after cold spring

After several decades of rising temperatures, the cold spring of 2013 harked back to the typical weather conditions of the mid–1960s. Information collected by British Trust for Ornithology (BTO) volunteers shows that birds responded by delaying nesting for several weeks, resulting in a breeding season that would not have seemed out of place 50 years ago.

In 1966, Harold Wilson was re-elected as Prime Minister, The Beatles released Revolver and, of course, England won the FIFA World Cup. With so much going on that year, it is perhaps unsurprising that the initiation of the Nest Record Scheme's annual productivity trends remained largely unreported, yet to this day the data collected by BTO volunteers plays a vital role in underpinning research into climate change. And in many ways, the unseasonably cold start to the 2013 breeding season brought us back to where it all began.

Spring temperatures have been increasing at an unprecedented rate since the 1970s. This warmer weather has caused vegetation to come into leaf earlier, triggering a comparable advance in the emergence of insects that feed on foliage. Data collected by volunteer nest recorders shows that birds dependent on these insects to provide food for their offspring have, in turn, brought their laying dates forward; studies of species such as Great Tit and the migrant Pied Flycatcher show that failure to track changes in food availability can have serious consequences, leading to a reduction in the number and quality of fledglings produced. 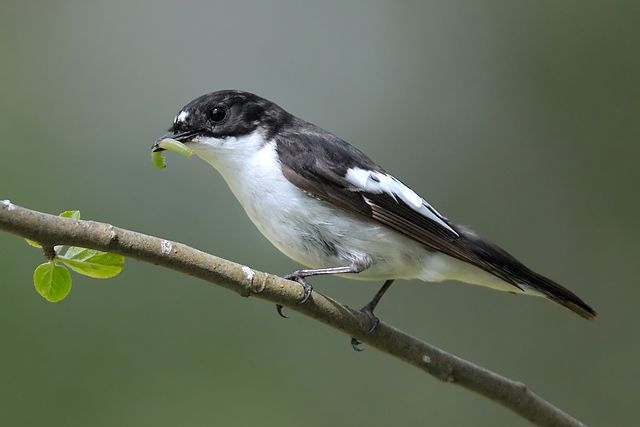 In 2013, however, spring temperatures plummeted to levels comparable to those experienced in the mid–1960s. "Our volunteers were out and about in March, keen to start monitoring early nesting attempts of Robin and Song Thrush, but the birds had other ideas," explained the BTO's Nest Records Organiser, Carl Barimore. "Several of our new recorders phoned up to ask if they were doing something wrong because they couldn't find any nests. One observer said he was unable to return to a Blackbird nest to confirm that the eggs had hatched because he couldn't find the hedge under the snow!"

Senior Research Ecologist Dave Leach added: "After three decades of advancement, laying dates reverted back to those recorded at the start of the Nest Record Scheme data run in 1966. Blue Tit and Chaffinch were laying 11 or 12 days behind schedule and the average laying dates for Blackbird and Song Thrush were the latest on record. This really is a remarkable demonstration of the flexibility of nesting behaviour in response to extreme weather; almost 50 generations have passed since birds last experienced these conditions, yet they have responded in exactly the same way as their ancestors."

Bird ringers operating Constant Effort Sites (CES) also reported a drop in the numbers of returning migrants such as Willow Warbler and Whitethroat, which winter south of the Sahara. Allison Kew, CES Organiser, reported: "The abundance of all eight warbler species monitored by our volunteers was below average in 2013, with declines ranging from 8% to 33%. Numbers may already have been reduced following the washout breeding season of 2012 and the cold temperatures greeting these insectivorous species on their return to the UK would have made finding food a challenge."