When we think of the Scottish Highlands, we imagine mountains and moors, freshwater and saltwater lochs, fast-flowing game-fish rivers and idyllic ancient castles. As far as many moths are concerned, it is the extensive natural wooded landscapes, found through the glens and across the upper Spey basin, that are the most important aspects for their survival. Not only do these habitats harbour true 'northern species' but they are also the best places to see many other moths that, for a number of reasons, have declined greatly in the southern part of their UK range. The Cairngorms National Park now covers 3,800 square kilometres, straddling five counties, and contains the world-famous Caledonian Pine Forest, so important to many rare animals and plants. In addition to this are large areas of natural birch forest with associated heather moor and wetlands forming a complex habitat mosaic at varying altitudes. 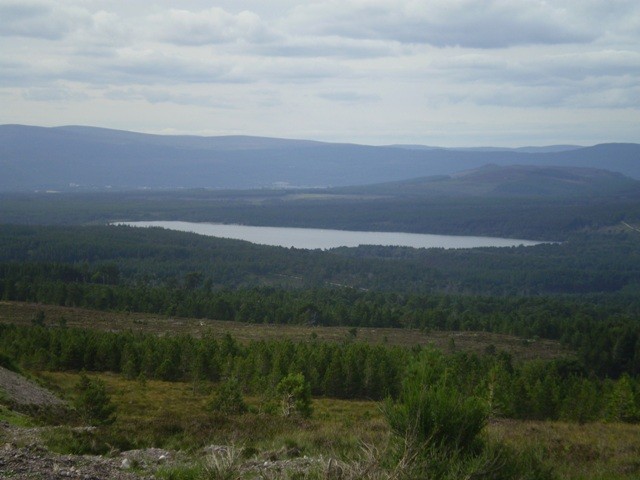 Caledonian forest evolved after the last Ice Age and is dominated by mature Scots Pine with an understorey containing Bilberry and heather. Other important tree species growing either within or alongside the pines are Aspen, Dwarf Birch and Juniper. Birch forest can be Downy or Silver Birch with either a bracken or grassy understorey. Other important plant species occurring within the birch mosaic habitat include Alder, Bramble, Broom, Gorse, rushes and sedges, which provide food for many larvae.

Some of the best places to explore, if looking for these types of habitats are:

As much of the habitat at some of these large sites is woodland mixed with moorland and bog, there will be a strong overlap of species common to both. One of the easiest ways to see highland moths is by joining up with a moth survey or public event such as those publicised at http://www.highland-butterflies.org.uk/events.html, regional RSPB websites or on local moth group websites.

Most of the best forest and woodland sites will be owned or managed by Forestry Commission Scotland, The National Trust for Scotland, the RSPB, Scottish Heritage and the many private estates. Always make sure you obtain permission from the landowner to run light traps, if thinking of doing a nocturnal moth survey at any site. It is equally important to send your results in to the appropriate county recorder. Common species are very under-recorded in these remote areas so include everything you see.

Even if rather large, as a single 'site' the Insh Marshes RSPB is perhaps the best moth location in the whole of Scotland. Although fairly self-regulating, the ecosystem there has to be managed carefully and its conservation problems are typical of Speyside as a whole. Over-grazing by both Red and Roe Deer, especially at the upper forest/moorland interface, means that the fragile and unique scrub zone finds it hard to regenerate. Many ancient Junipers have been damaged by the heavy snowfall of recent winters and, although recent summers appear to have been wetter than average, it is too early to say whether climate change has affected invertebrate populations in any way.

The highlands often have longer winters than the rest of the UK and both March and April can still be very cold, especially at night. Visiting moth-ers will have to take advantage of any milder weather windows, which are at a premium before the month of May. Moth trapping is very hit and miss during this period and some species can be more easily detected by sugaring fence-posts or the trunks of trees. This traditional practice is perhaps the best way of finding the localised Sword-grass, emerging after winter hibernation in birch woodland. The Sword-grass is found in higher numbers on the east side of the Cairngorms, especially around the headwaters of the River Don.

The Red Sword-grass is more abundant generally and is very frequent to sugar. Perhaps the most sought-after, truly spring species is the Kentish Glory. This can be looked for from mid-morning to mid-afternoon on warm days in any areas with extensive young silver birch growth. A good place to look is along the Deeside Way, where it runs along the edge of the Muir of Dinnet NNR between Dinnet and Cambus O'May. The males tend to fly rapidly between trees of two to three metres in height but can, with skill, be followed to and then photographed while resting on a branch or trunk. The female lays eggs in batches on the outer twigs of low birches. The larvae can be seen right through the summer. Both sexes come to light about an hour after dusk. The greatest threat to the Kentish Glory is habitat loss due to maturation of young host trees. Regular pulses of birch regeneration are encouraged by selective clearance of older trees. The larvae only appear to thrive on leaves on young growth of evenly spaced trees.

Moth-trapping with MV lights during later March and April in mature highland birch forest can produce another speciality, the Rannoch Sprawler. See the results of survey work done in spring 2011. Other species to be expected to light around this time are Yellow Horned, Red-green Carpet, Autumn Green Carpet, Mottled Grey, Ochraceous Pug, Brindled Beauty, Scarce Prominent, Red Chestnut and Pine Beauty. Interesting regional variations to look out for in the Highlands include the red forms of Powdered Quaker and Clouded Drab and the orange forms of Hebrew Character.

Kentish Glory can remain on the wing until mid-May and in some places are joined by Emperor Moths in more open areas. Another technique that can be employed in the daytime is that of carefully checking fence-posts along the edge of woodland for Glaucous Shears, Light Knot Grass and very occasional Grey Scalloped Bar. As May progresses, new species coming to light in birch and mixed woodland can include Birch Mocha, Ruddy Highflyer, Golden-rod Pug, Larch Pug, Dwarf Pug, scotica-form Broom-tip, Lunar Thorn and Ringed Carpet.

The species range gradually improves in June and many of May's moths continue to fly. By day the nigrescens form of Argent and Sable can be disturbed from Bog Myrtle on damper tracts and Rannock Loopers start to fly above the understorey in the Abernethy and Rothiemurchus Forests. At night Welsh Wave, Pretty Pinion and Peacock Moth are newcomers to birch-based habitats with the added chance of the localised Silvery Arches along the Spey Valley. Pine forest will have been fairly quiet for nocturnal moths up to now but later in the month is the time at last to make an effort, especially for those wanting to see the recently 'discovered' Pine-tree Lappet. Butterfly Conservation Highland Branch usually organises joint surveys with Forestry Commission Scotland. The details are normally posted on their website events page well in advance. No special qualifications are needed. Access into mature Scots Pine plantations in the Kiltarlity area of Inverness-shire, as part of a co-ordinated long-term project, are held annually in late June. These will almost guarantee the moth at light-traps as well as a fine selection of other species already mentioned above. Others such as Bordered White, Barred Red and Brown Rustic can be numerous, while the larger orange form of Small Square-spot, Dark Brocade and Saxon can also be seen. Preliminary DNA analysis of the Scottish Pine-tree Lappets may suggest that this is in fact an endemic subspecies. With darkness hours down to less than a handful in mid-summer it is best to man traps continuously for best results. 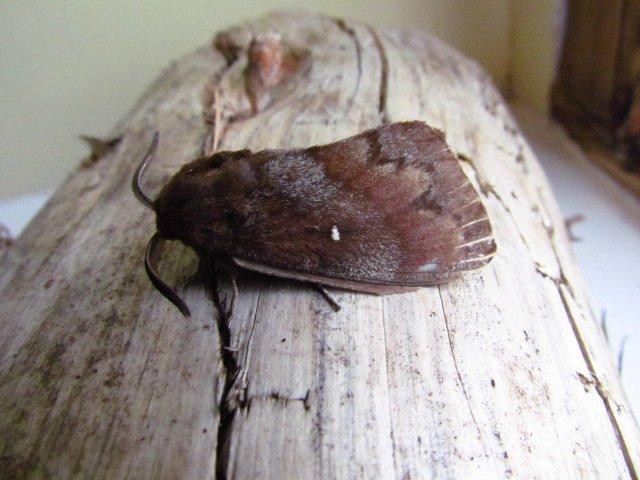 July is undoubtedly the best all-round month for moths in highland Scotland. The weather can also be at its best but remember to take plenty of insect repellent as the chosen habitats are often plagued by midges and mosquitos. New species in mixed and birch woodland are Map-winged Swift, Northern Spinach, Dark-marbled Carpet, amazingly different red and grey forms of Common Marbled Carpet, Chestnut-coloured Carpet, Beech-green Carpet, Barred Carpet, the cognata form of Tawny Speckled Pug, Juniper Pug and Dotted Carpet. From mid-month one can again try sugaring fence-posts for Double Dart and Dotted Clay. Other Noctuids coming to light may include the Scottish-form Great Brocade and the three classy Plusias: Lempke's Gold Spot, Gold Spangle and Scarce Silver Y. 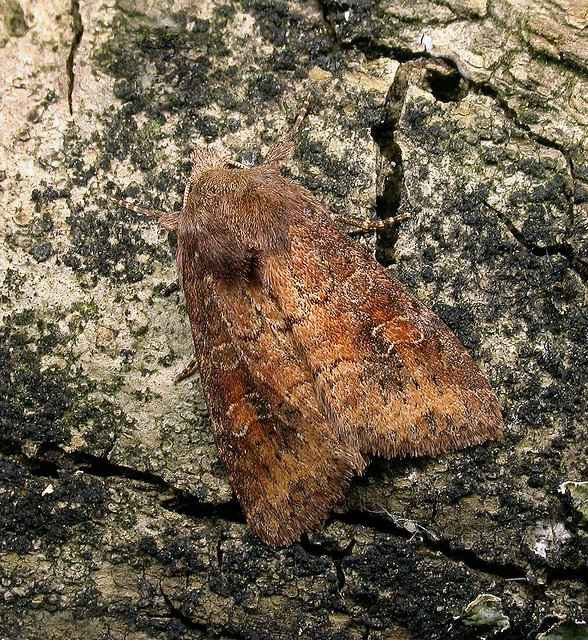 Some of the late-summer moths will continue well into September and are joined by the day-flyer Slender-striped Rufous amongst light birch woodland in north Perthshire. From late September both the Sword-grass and Red Sword-grass are emerging as new adults and can again be lured onto wine-ropes in the glens of upper Aberdeenshire. New adult Autumn Green Carpet and second-generation Spruce Carpets are again at large in October.

With such as range of fantastic moth species at large in the woodlands and others nearby on more open ground and at even higher altitudes the most difficult decision to make is when to go. One thing that will be certain is that, if you do go once, you will be almost bound to return.