Mother of a Goose!

A 50-million-year-old skull reveals that huge birds with a 5-metre wingspan once skimmed across the waters that covered what is now London, Essex and Kent. These giant ocean-going relatives of ducks and geese also had a rather bizarre attribute for a bird: their beaks were lined with bony teeth. 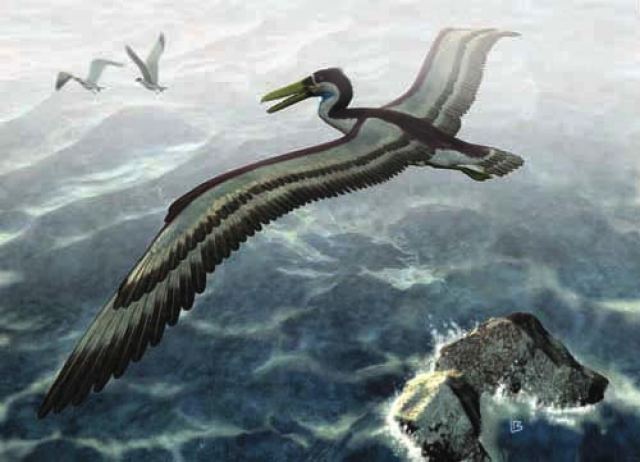 It may be a few weeks until the British pantomime season kicks-off, but this new fossil from the Isle of Sheppey is giving 'Mother Goose' an entirely new meaning. Described by Gerald Mayr, Senckenberg Research Institute and Natural History Museum, in the journal Palaeontology, the skull belongs to Dasornis emuinus, a bony-toothed bird, or pelagornithid. It was discovered in the London Clay, which lies under much of London, Essex and northern Kent in southeast England. The occurrence of bony-toothed birds in these deposits has been known for a long time, but the new fossil is one of the best skulls ever found, and preserves previously unknown details of the anatomy of these strange creatures.

With a five-metre wingspan, these huge birds were similar to albatrosses in their way of life. Albatrosses have the largest wingspan of any living bird, but that of Dasornis emuinus was over a metre and half greater. Despite these similarities, the latest research suggests that the closest living relatives of Dasornis and its fossil kin are ducks and geese. 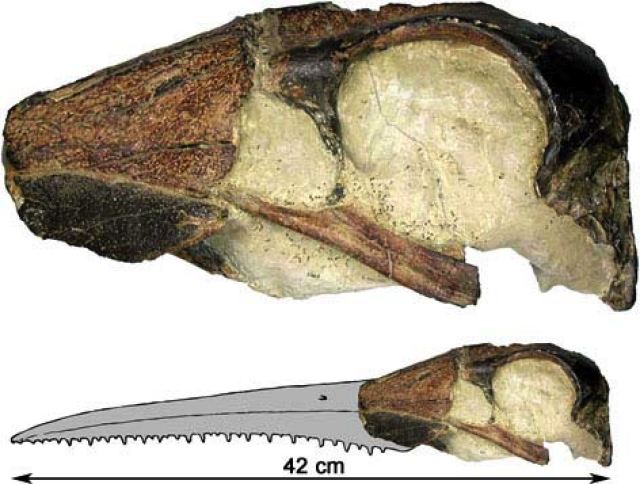 The skull of Dasornis, showing the fossil specimen and a reconstruction of the complete skull. Image: Fred Clouter.

"Imagine a bird like an ocean-going goose, almost the size of a small plane! By today's standards these were pretty bizarre animals, but perhaps the strangest thing about them is that they had sharp, tooth-like projections along the cutting edges of the beak," explains Gerald Mayr, expert palaeornithologist and author of the report.

Like all living birds Dasornis had a beak made of keratin, the same substance as our hair and fingernails, but it also had these bony 'pseudo-teeth' "No living birds have true teeth—which are made of enamel and dentine—because their distant ancestors did away with them more than 100 million years ago, probably to save weight and make flying easier. But the bony-toothed birds, like Dasornis, are unique among birds in that they reinvented tooth-like structures by evolving these bony spikes."

So why did Dasornis have these pseudo-teeth? "It's linked to diet," says Mayr. "These birds probably skimmed across the surface of the sea, snapping up fish and squid on the wing. With only an ordinary beak these would have been difficult to keep hold of, and the pseudo-teeth evolved to prevent meals slipping away."

The paper, "A skull of the giant bony-toothed bird Dasornis (Aves: Pelagornithidae) from the Lower Eocene of the Isle of Sheppey" by Gerald Mayr, is published in the September 26th issue of Palaeontology.
Written by: Forschungsinstitut und Naturmuseum Senckenberg
Login to leave a comment
Return to List