The Belted Beauty moth (Lycia zonaria) occurs in the Hebridean islands of western Scotland, on the Ardnamurchan peninsula of western Argyll, at a few sites in western Ireland, at one site in Wales and at just two in England. It is a smallish, dumpy moth and, like some other early spring geometrids, the females are wingless, meaning that the species hardly ever moves away from its breeding habitat. The males are triangular in shape with cryptic grey and pale brown stripes. The female is like a small, oval, dark grey ball of fluff with narrow horizontal stripes. 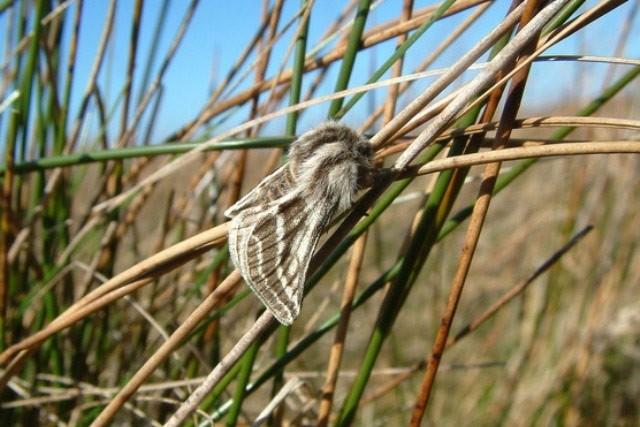 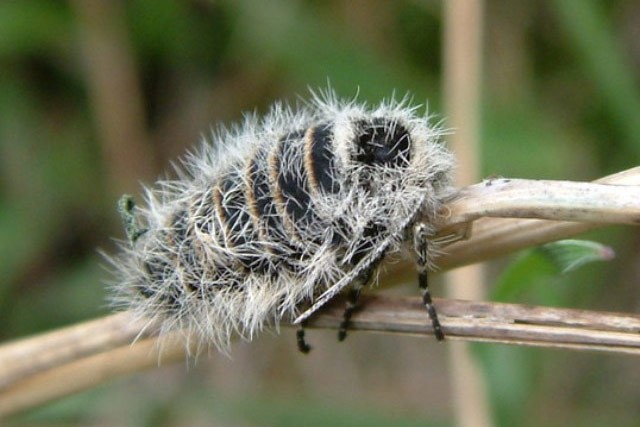 On the Hebrides the moth is found in coastal machair, where shell sand has become richly vegetated with herbaceous wild flowers. This habitat does normally not experience tidal inundation. 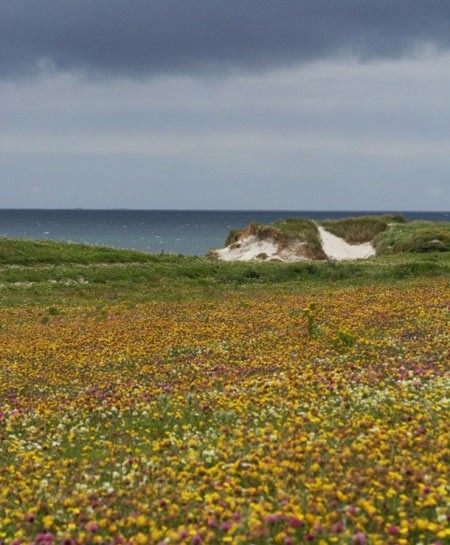 Emergence on the Outer Hebrides appears to be temperature driven. Numbers recorded are quite variable, reflecting the prevailing weather conditions and the number of observers. They are present on virtually all of the machairs from Lewis to Vatersay, but are commoner at some sites such as Balranald RSPB on North Uist. The Hebridean moths are normally on the wing from March to mid-May and have even been seen in late February. Males often come to light, as on 29th April 2012 when 11 were trapped. The latest adult ever recorded was trapped on 5th June 2010. 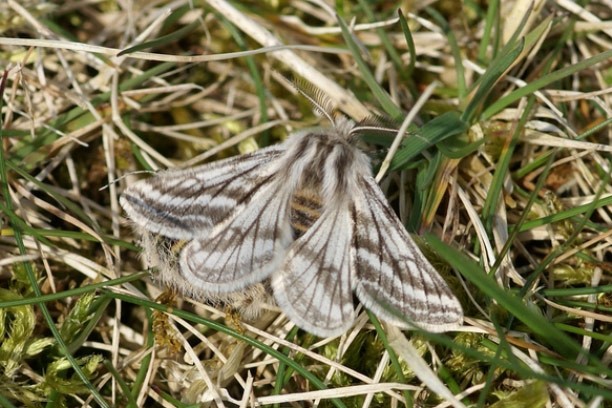 Females are sometimes found in elevated positions when attracting a mate and can be located at the top of fence-posts. Steve Duffield recalls on one occasion counting 211 on stubby posts outside the community hall on Vatersay on 4th May 2007! Larvae can be found to be locally abundant on a wide variety of plants between June and August. 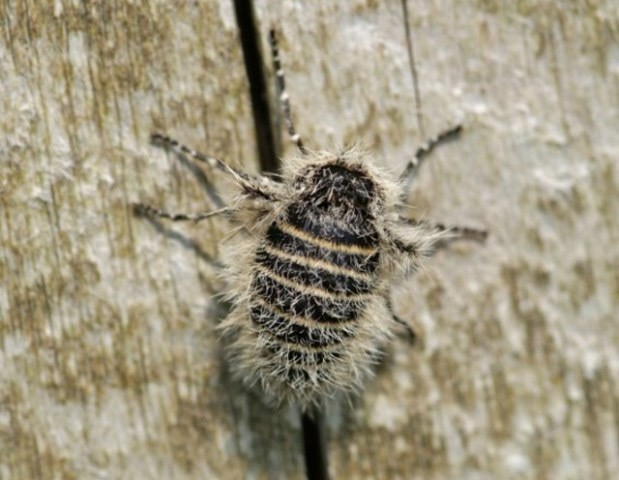 The Belted Beauty does not appear to have any conservation problems on the Outer Hebrides, where the natural landscape appears safe due to the admirable and inherent environmental responsibility of the island's communities. However, it has suffered serious decline and extinction over much of its range in Wales and England where coastal protection schemes and developments such as housing and golf courses have caused the loss of nearly all of the many colonies that were known in the 1920s. It is critically endangered at two of its remaining sites (in Caernarvonshire and Cheshire) and may face extinction at these — sightings in 2011/12 were limited to a single moth at the Welsh site in 2012. This leaves only one remaining site in England with a healthy population, near Heysham (Lancs).

The Lancashire population is found in a rather unusual habitat, where the sandy saltmarsh is inundated up to ten times a year. Here the preferred larval foodplant is Autumn Hawkbit Scorzoneroides autumnalis. Surveyors have noticed that the moth's emergence may actually coincide with some higher spring tides, which may have a 'warming' effect on the substrate. In recent years some of the highest counts have occurred when the habitat is still wet. Traditionally the largest numbers of adult moths have been counted towards the end of the second week of April at this site. 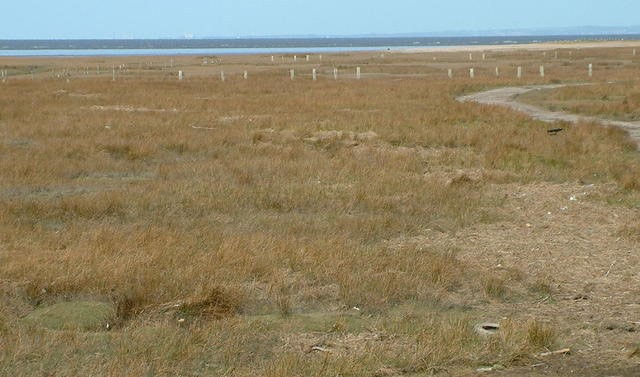 The moth was initially discovered here in 1975 as a single larva. Subsequent records came in 1982 (1 male), 1985 and 1993 (single larva each), but it was not until 2002 that the extent and size of the colony was fully established. Peak counts in recent years have totalled over 1,500 moths but more normal totals are in the range of 150 to 250 individuals. 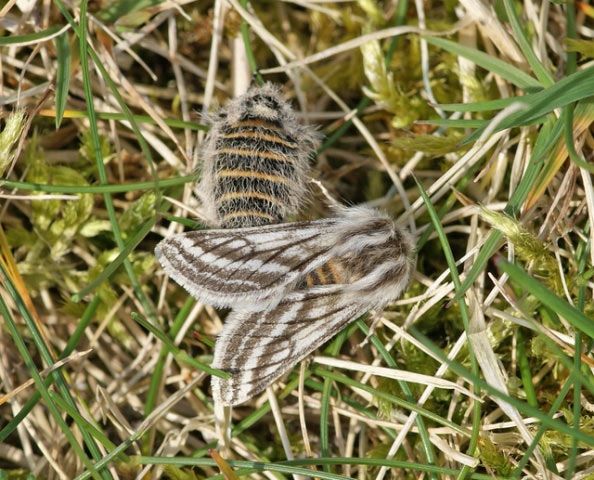 Each year, a full survey of the site is carried out in mid-season (mid-April). In addition, a weekly transect has been established to monitor changes in numbers in a standardised manner. Details of the main annual survey are normally posted well in advance on the Lancs Moth Group website. No moths were found in mid-April 2013, almost certainly due to a very late spring for many larger moth species. However initial concerns were allayed when 22 males were counted at Potts Corner on 6th May 2013. This further highlights the importance of the weekly transect.

It is worth noting that even this rare and threatened species is not protected from the vagaries of modern life. A planned offshore wind farm in Morecambe Bay has opted to run landfall cables through the northern edge of the colony. Despite much discussion with the energy firm involved, DONG Energy, over the last 18 months, they still intend to submit a planning application in mid-May 2013 for a 30m wide trench (plus construction damage either side) through the site. Butterfly Conservation and the Lancashire Moth Group have been actively opposing the route and will continue to do so. The only proposed mitigation on offer is to drill an underground route for the cabling, but this is not an easy or even proven procedure due to the nature of the substrate.

The next stage of the planning procedure will be to submit objections once the planning application is submitted. If you would like to register your objection, please contact Steve Palmer with your email address, who will in turn inform any registrants once the application has been submitted and provide more details on how to object.

Mark Parsons of Butterfly Conservation has been in contact with specialists in Europe and the results of his consultation suggest that the moth is declining in Sweden, the Netherlands and Austria, and fluctuating in Denmark (although a recent reassessment in the latter country considered it to be declining). It is stable in Belgium (albeit with only two sites) but trends were unknown in Ireland and Germany. It was also tentatively suggested that, based on the results of this survey, the UK has an international responsibility for the conservation of this species.