More on the York Swift 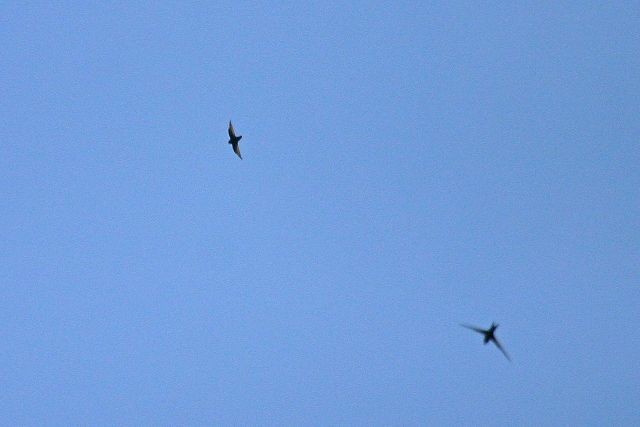 There has been much discussion elsewhere about the identity of the swift at Fulford, York (N. Yorkshire) on 24th and 25th July 2007 (read the original account of the find). Originally identified as Chimney Swift, everyone seemed happy until the photos were examined, and now it seems most people feel the bird was a Common Swift, missing its rectrices and outer primaries. Their main objection seems to be the length of the 'arm', this appearing too long for Chimney Swift, but in my judgement Common Swift has at least as short an 'arm', possibly even shorter, so a long arm does not make it a Common Swift. There is also concern over the shape of the tail. In the photos, this does not flare out at all from its juncture with the body. Chimney Swift's tail looks like this when closed, but if it looked like this all the time then it would be a cause for concern. I honestly can't remember if I saw the tail fanned at all, but other people do claim to have seen this.

One of the photos, of the bird flying away, shows palish tides to the rump (only the sides are visible) and if this is not just photographic effect, then it is a strong pointer towards Chimney Swift. The bird was several times reported as showing well. Did anyone get good views of the upperparts? Did anyone see tail spines?

I had reasonable 'scope views of the bird flying towards me, and I described the breast as slightly paler than the rest of the underparts, with a grey-buff tinge. I was specifically looking for the extent of pale on the underparts. This is OK for Chimney Swift but not for Common, but I did not see the colour of the chin and throat. Other people have said that the breast was dark, and I cannot explain how I could see the breast colour but not the chin and throat. I was confident that I had assessed things correctly, but obviously it would have been nice to have been able to confirm this with further views, but after showing right overhead for a while, when no plumage details could be seen, it drifted off south and I did not see it again. I wish now that I had gone back again the next day, but at that time there was no controversy.

Primaries are normally moulted descendently, and if all the inner primaries were newly grown, I would expect to see part grown outer primaries of different lengths, but they are completely missing. If the bird is a Common Swift, then I reckon, for the tail to appear that length and shape (i.e. square-ended), the inner and central rectrices must be missing, and the outers just the right length on each side so that they reach the end of the undertail-coverts. Feather mites have been implicated, but the damage is very symmetrical, and in the case of the primaries, so selective (outers completely missing, no visible damage to the rest) that I don’t buy this theory.

The arm certainly does look too long in the photos for any swift species, so I wonder if this appearance is somehow caused by the missing outer primaries. I still feel the bird could be a Chimney Swift as originally identified, but unless someone has a good description of the plumage, both upper- and underparts, compiled from repeated good views, or unless further photos come to light, then I feel that the identity of this bird can never be proved.

Did you see this bird? If so, what were your views on its identity, or can you shed light on any of the features that others missed? Perhaps you have some additional photos?