September is usually the month when migrating butterflies and moths reach our shores in very large numbers. The reason is that insects search for new breeding grounds away from their parched homelands after a hot, dry summer, and are inadvertently caught in weather systems and carried over the Atlantic towards the UK - a little further than they intended to go! Unfortunately this year, a cool north or west wind blew for most of the month, keeping numbers well below average. Despite this, a small number of very rare migrants were recorded during the month.

The month started well with a Striped Hawk-moth taken at light in Lawford, Essex on 2nd. The 3rd proved to be the best night of the month with a 3rd British record of Oak Yellow Underwing recorded at light in Buckingham Palace gardens (the Queen was amused!). This species resembles the more familiar Red Underwing but has yellow hindwings (obviously) and is much smaller. An Oleander Hawk-moth was taken at light at Morfa Common in Pembrokeshire; there was a Golden Twin-spot at Frinton-on-Sea, Essex, and two Ni Moth at Swanage and Portland, Dorset. A Spotted Clover came to light at Denham, Suffolk on 6th. This is a very rare visitor to the east coast of England, only being recorded on a handful of occasions. A brief spell of easterlies brought a new moth to Britain on the night of 11th when Nycteola asiatica was trapped at Spurn, Yorkshire. This is an Eastern European species closely resembling our own Oak Nycteoline, and can only be reliably separated by its genitalia. The tropical-looking Pyralid moth Diasemiopsis ramburialis came to light on Guernsey, Channel Islands on 11th. On 12th, a Death's-head Hawk-moth was found near Ballygowan, Co. Down; two Dewick's Plusia were taken at Rudston, East Yorkshire and Lerwick, Shetland on 12th and 13th respectively. The second Oleander Hawk-moth of the month was found at Mossbank, Shetland on 14th ; and a Golden Twin-spot came to light at North Walsham, Norfolk on 19th. On the night of 20th, Britain's seventh Stephen's Gem came to light on the Gower, Glamorgan. This American species has now been recorded five times in the last two years, raising question marks over its status as a rare vagrant. The second Diasemiopsis ramburialis of the month was taken on St Mary's, Isles of Scilly on 20th, and the fourth British record of Paignton Snout came to light at Timsbury, near Bath on 21st. A quiet end to the month saw a Golden-twin Spot at Kingsgate, Kent on 28th, and the first example of the pretty white Pyralid Palpita vitrealis (=unionalis) was taken at light on St Mary's, Isles of Scilly on 30th. The month ended with news that no fewer than seven Rosy Underwing (there are only two previous British records) had been taken on the Channel Islands during late August/September, suggesting that the moth is now breeding on the islands. Less scarce migrants, including Vestal, Gem, Convolvulus Hawk-moth, Humming-bird Hawk-moth, White-point, Delicate, White-speck, Small Mottled Willow, Bordered Straw and Scarce Bordered Straw were all recorded during the month, as were all of the common species..

The month also started well for the migrant butterfly with news that a Monarch had been observed on Fair Isle in the Shetlands on 1st. This is surprisingly the first record of the butterfly on the islands. A very doubtful record of a Berger's Clouded Yellow came in from a birder on St Mary's, Isles of Scilly on 7th. There was no evidence that the butterfly was captured or photographed, therefore it was likely to have been the helice form of Clouded Yellow. A Camberwell Beauty was reported from woods near Wells-next-the-Sea, Norfolk on 11th. Clouded Yellow were reported in good numbers all along the south coast, with the occasional record elsewhere. The highest number observed during the month was 54 at Beachy Head, Sussex on 30th. Both Red Admiral and Painted Lady were observed in good numbers during the month.

Like September, October proved to be a fairly average month for migrating moths, with the occasional rarity keeping things interesting. On 1st, the Pyralid Diasemiopsis ramburialis came to light at Coverack, Cornwall - the first decent migrant recorded during my holiday in Cornwall; a Bloxworth Snout was taken at light at the observatory on Portland, Dorset on 3rd, and the second Diasemiopsis ramburialis of the month was taken there on 6th. An example of the micro-moth Tebenna micalis came to light on Tresco, Isles of Scilly on 8th. A Golden Twin-spot was recorded from Wix, Essex on 11th; and my holiday ended in fine style with a Radford's Flame Shoulder taken at light at Coverack, Cornwall on 12th (10th or 11th British record). Being a little greedy, I then recorded a Death's-head Hawk-moth at Swanage, Dorset on 20th. This species is bigger than many of our smaller birds, and makes a squeaking noise when threatened. 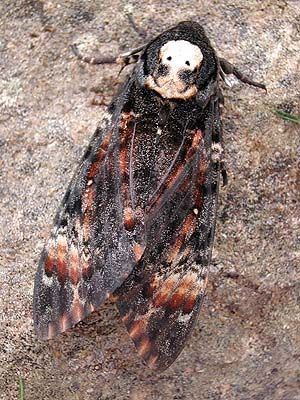 A Ni Moth came to light at Langley Upper Green, Essex on 21st; and the tropical Pyralid Euchromius ocellea came to light on St Mary's, Isles of Scilly also on 21st. A superb example of the very rare Silver-striped Hawk-moth came to light near Ripon, North Yorkshire on 24th; and three Cosmopolitan came to light on St Mary's on 24th, 27th and 28th. Less scarce migrants, including Palpita vitrealis, Vestal, Gem, Convolvulus Hawk-moth, Humming-bird Hawk-moth, White-point, Delicate, White-speck, Small Mottled Willow, Bordered Straw, and Scarce Bordered Straw were all recorded during the month, as were all of the common species.

October proved to be a fairly poor month for migrant butterflies, with average numbers of both Painted Lady and Red Admiral recorded. Clouded Yellow were again recorded all along the south coast, with an impressive 85 noted at Beachy Head, Sussex on 4th. Surprisingly there were no Monarch sightings during the month.

You can send in your migrant butterfly or moth records by either completing the form on the website www.migrantmoth.com, or email steve@migrantmoth.com.
Written by: Steve Nash