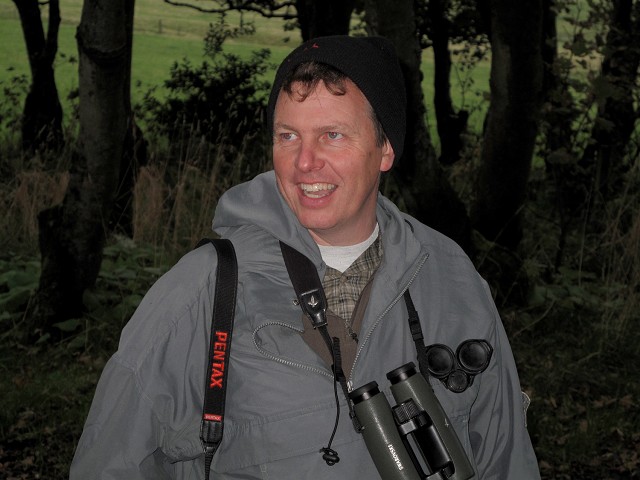 I was walking along the north bank of No 1 sludge deposit tank on Frodsham Marsh, Cheshire, with the intention of watching the ducks that usually gather there in late winter; it was 1977. Ahead of me was another birder, and in his hand he held a rock which, unnoticed by me, was hurled with a swift and sure aim as if thrown by a cricket bowler.

The rock barely made the distance from the top of the bank across the remnant marsh edge before landing with a lacklustre plop in the water beyond. Most of the ducks that hadn't already seen us coming didn't hang about and with them were several Common Goldeneye, Tufted Duck and a possible Greater Scaup.

"Hey, what are you up to?" I asked in the sternest voice I could muster. The birder ahead spun round to face me and, with a mop of hair (topped with a black bobble hat perched too far back on his head) and a big, broad smile set in a red face, was a young lad. "Hi, I'm Martin! You're Billy, aren't you?"

That was my first encounter with Martin Garner, the kid I had seen occasionally on North Cheshire RSPB field trips and someone who would become my constant companion and share many birding experiences over the following years.

We both loved birding Frodsham Marsh. At the time it was one of the best places in north-west England to find, twitch and dip rare waders. The epicentre of all the action was the sharp twist in the River Weaver known as the Weaver Bend. Martin proved his worth there on 29 September 1979 when, aged 15, he found a Long-billed Dowitcher. To say he had an eye for the bird was an understatement.

On another occasion a few years later we made arrangements to meet up on the bank overlooking No 5 tank. In those days thousands of Dunlin would fly in whenever there was a big tide out on the Mersey Estuary, to settle, roost and feed on the oozing sludge.

Martin had arrived a few minutes before I did. As I scrambled up the bank to meet him, he turned his head to greet me with that engaging smile and sparkle in his eye and said: "Wanna see a White-rumped Sand?" That wasn't a one off — it felt like I was always a step behind, but in Martin's mind it was a shared experience.

As young birders we were blessed to have mentors that showed the same amount of respect to us as we had for them. Doug Percival and Don Weedon were Young Ornithologists' Club officer and field officer respectively for the North Cheshire RSPB group from the 1970s. We gained considerably from their tuition and later benefited from the expertise of Wirral birder Ted Abraham. Martin has acknowledged all these people in the past and it's good to pay them back in words for their time and patience.

From our shared love of Frodsham Marsh, we decided to set up a bird log on the marsh so that we could record our sightings for other birders to read and for them to add their own observations. This proved to be a great success, and when we collated enough material from the log and various publications including previous Cheshire Bird Reports we collaborated in writing a book, The Birds of Frodsham Marsh, which went on to sell out in months.

We soon hooked up with a few of Wirral's finest, including their youngest star Andy Stoddart. None of us had a car and Martin was the only driver, so it was on him to arrange a hire car whenever we needed to bird further afield.

We decided to check out the geese flocks over at Marshside near Southport and Martin picked us both up in a top-of-the-range racy coupé. We couldn't believe he had the cheek to splash our cash on this self-indulgence, but it did feel good!

When we got to Marshside and grilled the Pink-feet we found a first-winter Lesser White-fronted Goose within the flock. When I say 'we', I should really add that it was Martin who first picked it out. Not only did he have a sparkle in his eye, but he also had a gift to wheedle out something from nothing.

Money was always tight, so we resorted to hitching to get to various places around the country. One of the most memorable 'hitch twitches' was the 350 miles we did from Frodsham to Penzance in 12 hours in October 1986. There was only one drawback to this: whenever a car pulled up to offer us a lift, Martin would jump into the back seat so he didn't have to engage in conversation with the driver. It was always left to me to explain why two young men were hitching lifts from strangers, through the night, to see a rare bird.

One event still brings a wry smile to my face. A final lift that day would have brought us to the Scillonian terminal at Penzance, but carload after carload of birders drove by, ignoring our outstretched thumbs. One member of a group of birders who drove past us would eventually become a good friend to Martin at Flamborough: Brett Richards.

The last birding trip before Martin moved south was to the Outer Hebrides to see the Pied-billed Grebe and all the other birds those beautiful islands possess. The other members of the team were Stuart Gibson and Mark (Whipper) Gibson, who were not related.

After we successfully cleaned up on the 'Hebs', we were driving along the mountain road at Applecross looking for Ptarmigan. It had been a long day and Stuart, the driver, was tired, and his patience was about to be tested to its limits.

I was in the front and Martin and Whipper were squabbling on the back seat. Soon their conversation turned to playful banter, then high-jinks punches leading to a 'full-on' wrestling match.

Stuart was obviously trying to keep his eye and concentration on the winding road ahead, but when Whipper's body was lifted from his seat and physically thrown across the back of the front seats he reached the end of his tether. Martin was launching himself for his final assault when Whipper took the opportunity to scream "Save me!"

Stuart casually brought the car to a stop at the next passing place, put the handbrake on, slowly turned his head in Martin's direction and said: "Get out and hitch home." Martin's protests at being the wronged party fell on deaf ears.

I caught a wink from Stuart as he opened the driver's door and made his way to the back of the car. He opened the boot and lifted out Martin's rucksack, placing it on the roadside.

Martin was on his hands and knees in a kind of mock begging, asking Stuart to forgive him. Stuart couldn't keep a straight face for much longer and burst out laughing. We continued our journey to Speyside, but within 30 minutes the back-seat shenanigans started all over again. Stuart turned to me and shook his head.

You meet good birders all the time, but when you grow up with a gifted one it's a privilege to watch them develop into something special. I'm not saying Martin was faultless, but when he did make a mistake, he rarely made it twice. He simply loved being with people and if that involved birding then he was even happier. There is no ending to this article because Martin's memory will be ongoing and will always be part of how I feel about our friendship and how he helped to develop my birding and my outlook on life.