Pipits often cause identification difficulties and are dismissed as 'small brown streaky birds'. A closer examination, however, reveals them to be relatively distinctive, as well as charismatic. Three of the small pipits – the ubiquitous Meadow, the rather local Tree and the very scarce Olive-backed – are the subject of this ID guide. 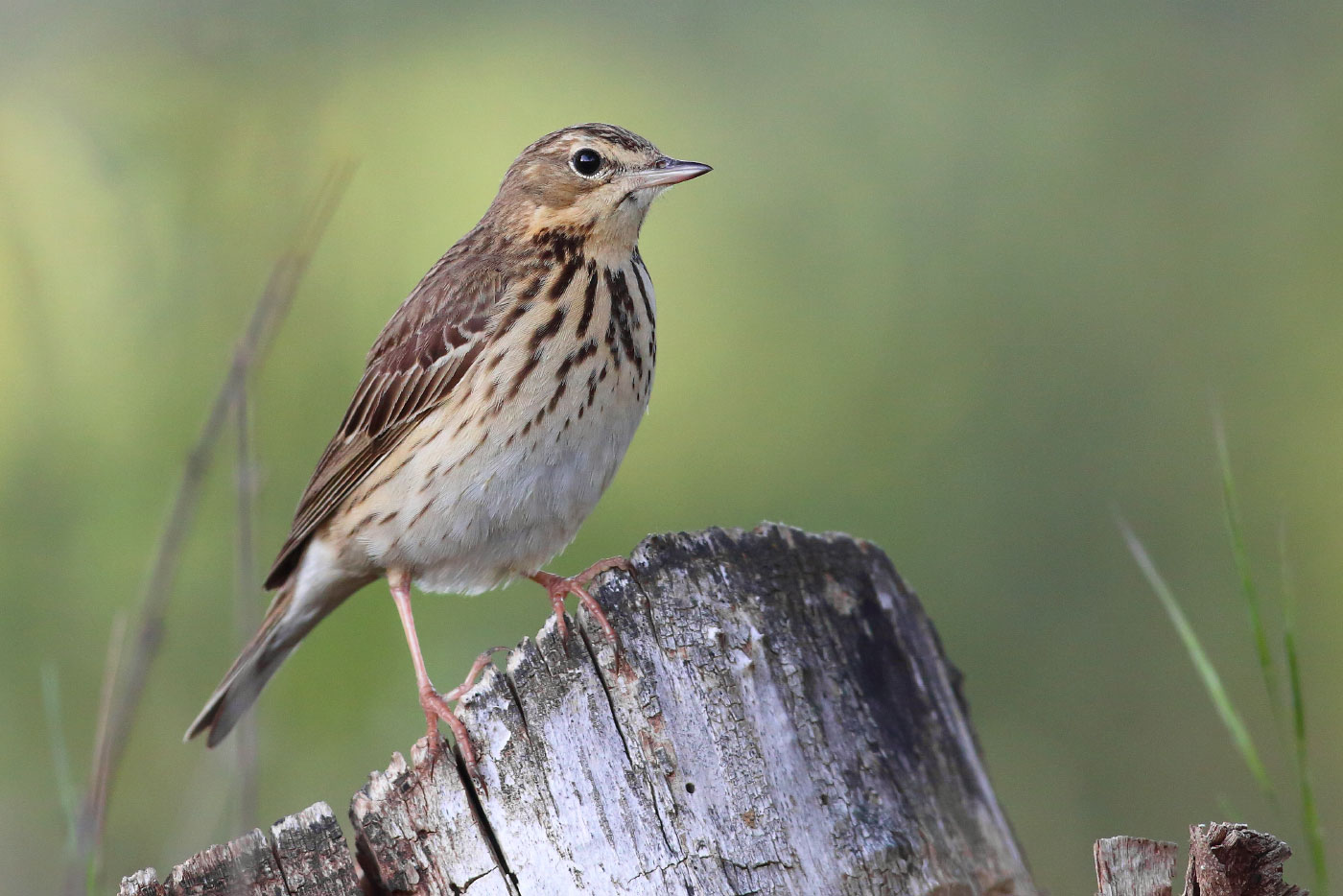 Tree Pipit (Valladolid, Spain, 30 April 2015). Although often characterised as 'small, brown and streaky', pipits are in reality birds of great beauty and charm. This delightful portrait of a Tree Pipit shows well the species' key features: a rather solid appearance, a stout-based, almost triangular bill, a warm buff wash to the upper breast and a contrast between heavy black breast streaking and much finer lining along the flanks (Carlos Bocos).

This species breeds from eastern Greenland in the west to north-west Russia in the east; many birds winter around the Mediterranean. It is a common breeding bird in Britain, particularly in the uplands of the north and west, but it is also present in winter and is a common migrant, too, with large numbers passing through the country in spring and autumn. These include birds from the breeding populations in Greenland, Iceland and the Faeroes.

The species is worth a much closer look, though. Concentrate first on its behaviour, noting its slightly nervous, even neurotic, demeanour on the ground, walking jerkily and erratically through the grass with an alert 'head-up' profile. Next look at its structure and note the fine bill, the small, rounded head, the slim body and, on the closest views, a strikingly long hind claw.

The plumage varies according to age and season and can appear anything from a fresh, slightly olive-brown through grey-brown to a pale faded fawn. The face pattern is worth looking at closely: Meadow Pipits always have a striking plain and 'open' face, mainly the result of a prominent eyering.

Most similar to Meadow Pipit is its arboreal cousin, Tree Pipit. This species has a large breeding range which extends from western Europe (though not Iceland or Ireland) to Siberia. Unlike Meadow Pipit, however, this is a long-distance migrant, wintering in Africa south of the Sahara and in the Indian subcontinent. It is a localised breeding bird in Britain, mainly in the west, but it also occurs in eastern Britain as a migrant from the Continent.

Although Tree Pipit resembles Meadow Pipit in plumage, in reality it is a rather different bird. If flushed from the ground it generally rises silently and flies low for a short distance before dropping into cover once more. In wooded habitat it is likely to escape to the safety of a tree, where it may walk with ease along the branches.

A good flight view reveals a rather distinctive shape with broad-based wings, a plump body, deep chest and tightly closed tail. The flight is smooth and bounding, not jerky and hesitant.

High-flying migrants do tend to call, but are often so high that they are invisible. The call is totally unlike Meadow Pipit: a distinctive single buzzing peeezzz.

When observed on the ground its demeanour is very different, too. It creeps low to the ground on flexed legs, moving stealthily and deliberately through thick grass with a smooth fluid motion, quite unlike the jerky progress of a Meadow Pipit. It also has a distinctive habit of gently 'pumping' the rear body and tail. This is a shy species which prefers to slink off through the grass and hide rather than take to the air.

Now look at the structure and note the heavier, deeper-based bill, solid-looking head, more 'neckless' appearance, plumper, longer body and, on the closest views, a short hind claw (an adaptation to its arboreal lifestyle).

The plumage varies with age and season, too, but on a close view note a slightly stronger face pattern with a more prominent supercilium and a thin dark loral line, the whole face being less dominated by the eyering. There is normally a beautiful golden-buff wash across the throat and breast, and a contrast between heavy black streaking across the breast and finer lining along the flanks.

This species nests in Siberia and north-east Asia. Like Tree Pipit it is a very long-distance migrant, wintering mainly in South-East Asia but, like many Siberian migrants, it also wanders to Britain in autumn. Formerly a great rarity, it is now discovered more regularly here and to date has amassed almost 500 records. It occurs mainly in October and records are concentrated on the east coast and Scilly, with Shetland being the most favoured location.

This species closely resembles Tree Pipit; indeed it can be seen very much as an eastern counterpart of that species. Confusion with Meadow Pipit is much less likely. Olive-backed Pipit shares all the behavioural and structural traits of Tree Pipit, and on an initial or brief view will most likely invite identification as that species. Its call is also almost identical – a high-pitched peeezzz, perhaps slightly higher pitched, thinner and less buzzing than Tree Pipit, but really quite similar.

Identification as Olive-backed Pipit has to rely on plumage, but fortunately this is in most cases a relatively distinctive bird. Unlike Tree Pipit, its mantle is a relatively unstreaked plain olive-brown. Look mainly at the head and underparts, however, and note a striking bird indeed, with a rather stronger face pattern than Tree Pipit, made up of a bold supercilium washed golden-buff before the eye, dark crown sides forming 'eyebrows' and twin pale and dark rear ear-covert spots.

The underparts are more strongly marked than those of Tree Pipit too, with very bold black blotching across the breast and finer lines down the flanks. These more striking contrasts almost give the impression of a miniature Redwing. 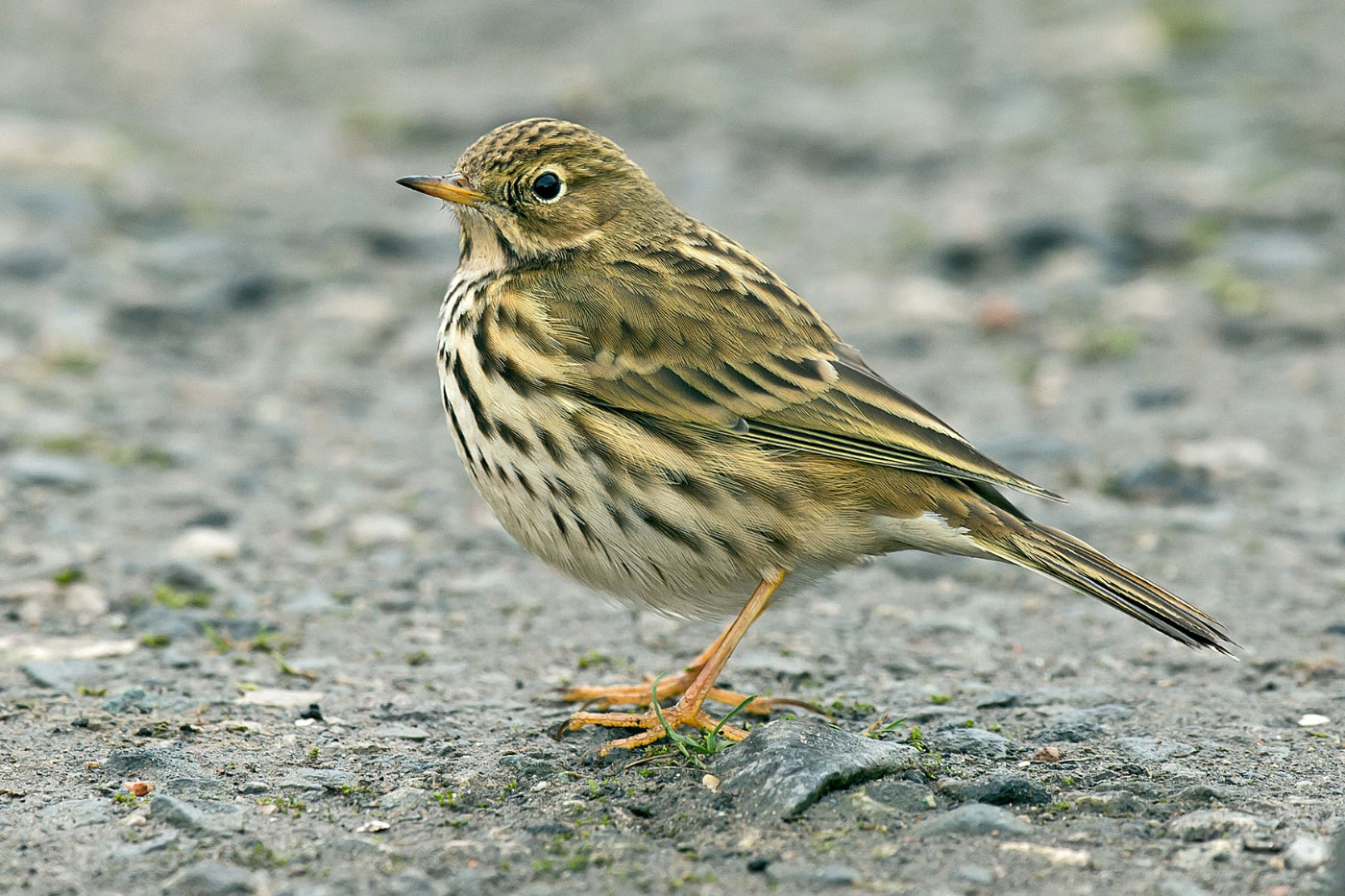 Meadow Pipit (Seaforth, Lancashire, 26 January 2013). This Meadow Pipit shows the species' characteristic rather small-bodied, round-headed and frail appearance, thin, spiky bill and, just visible here, very long hind claws, an adaptation to a life spent mainly on the ground. The underparts streaking is typical of Meadow Pipit – well broken lines down the flanks which are similar in their prominence to the streaks on the breast. The face pattern of Meadow Pipit also repays attention – here typically dominated by the whitish eyering and with slightly pale-centred ear coverts (Steve Young). 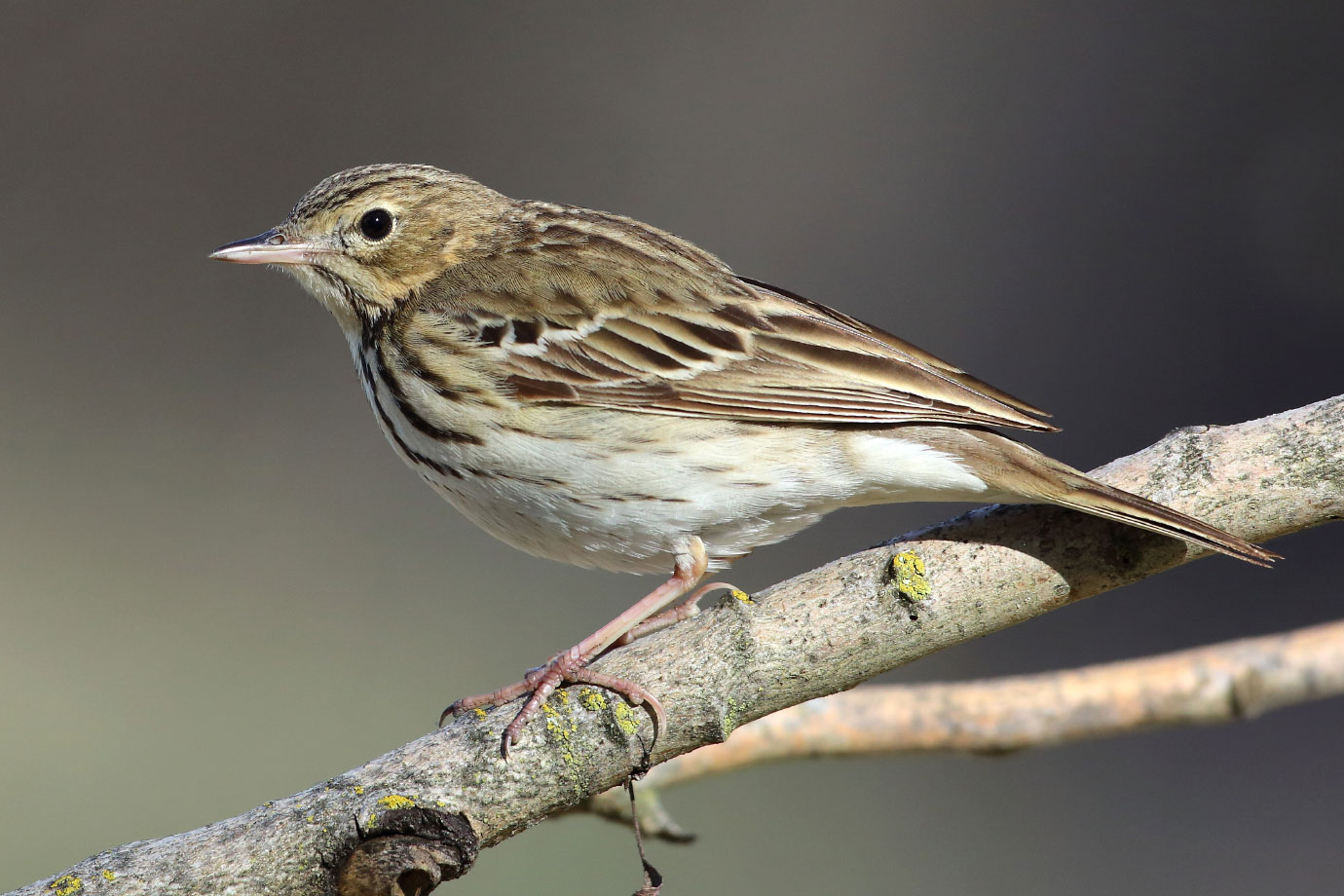 Tree Pipit (Valladolid, Spain, 29 March 2016). By contrast, this Tree Pipit shows a longer and more heavy-bodied appearance with a deep-based, rather stout-looking bill and, easily visible, relatively short hind claws – an adaptation to a more arboreal lifestyle. Some plumage features are visible too, notably a buff wash to the upper breast and a contrast between the heavy blackish breast streaking and the much finer flank streaking. Note also the subtle face pattern differences. The face is not dominated by the eyering and the ear coverts are relatively plain and uniform (Carlos Bocos). 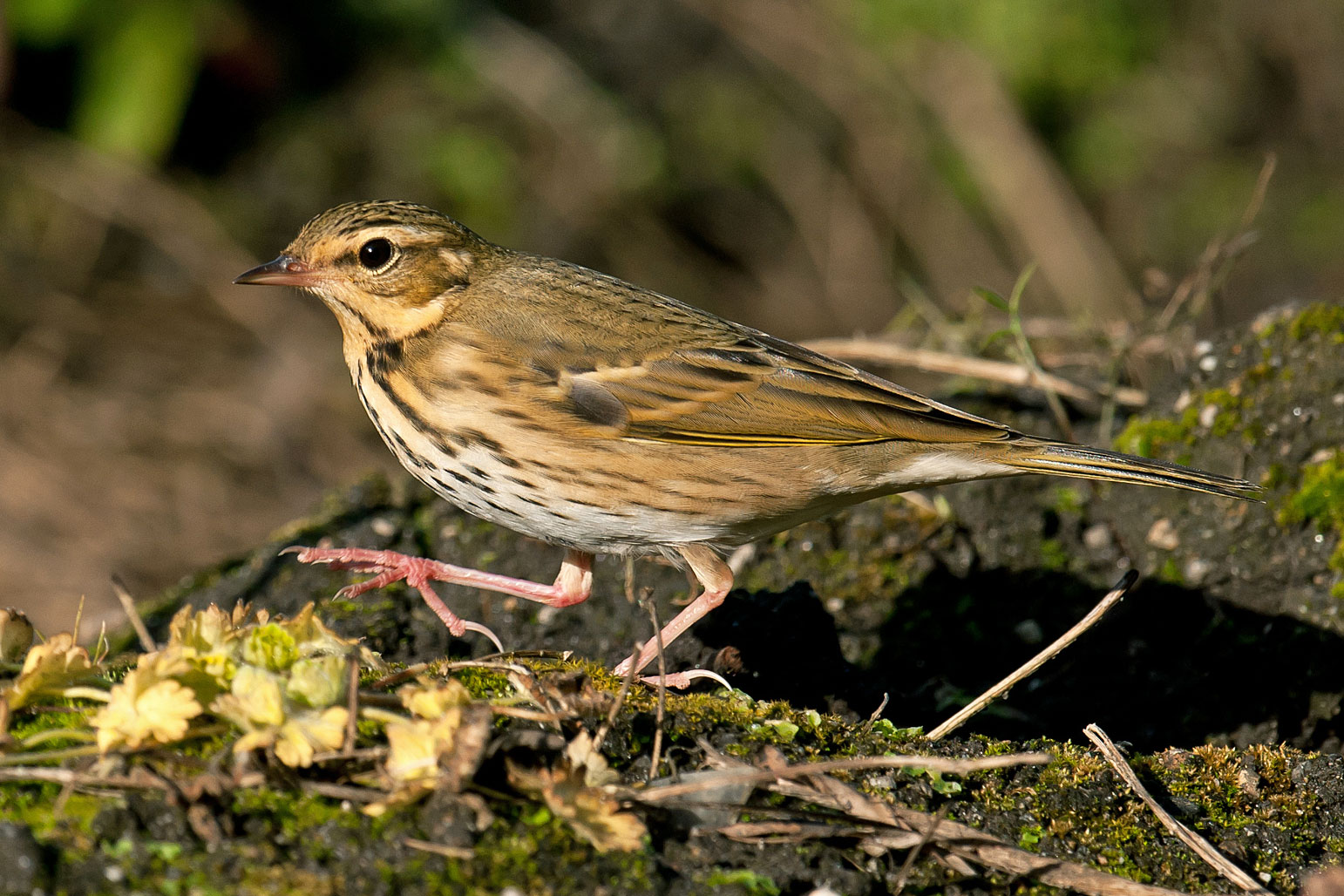 Olive-backed Pipit (St Agnes, Scilly, 21 October 2008). This bird shows many similarities to Tree Pipit – a long, smoothly proportioned body, a deep-based, slightly wedge-shaped bill and a short hind claw. Moreover, the breast streaking is very heavy and contrasts with much finer lines on the flanks. Note, however, that the mantle is relatively plain and unstreaked – unlike Tree Pipit – and the face pattern is more complex, with a bolder supercilium which is buff before the eye and small dark and pale marks at the rear of the ear coverts. These are classic features of Olive-backed Pipit (Steve Young). 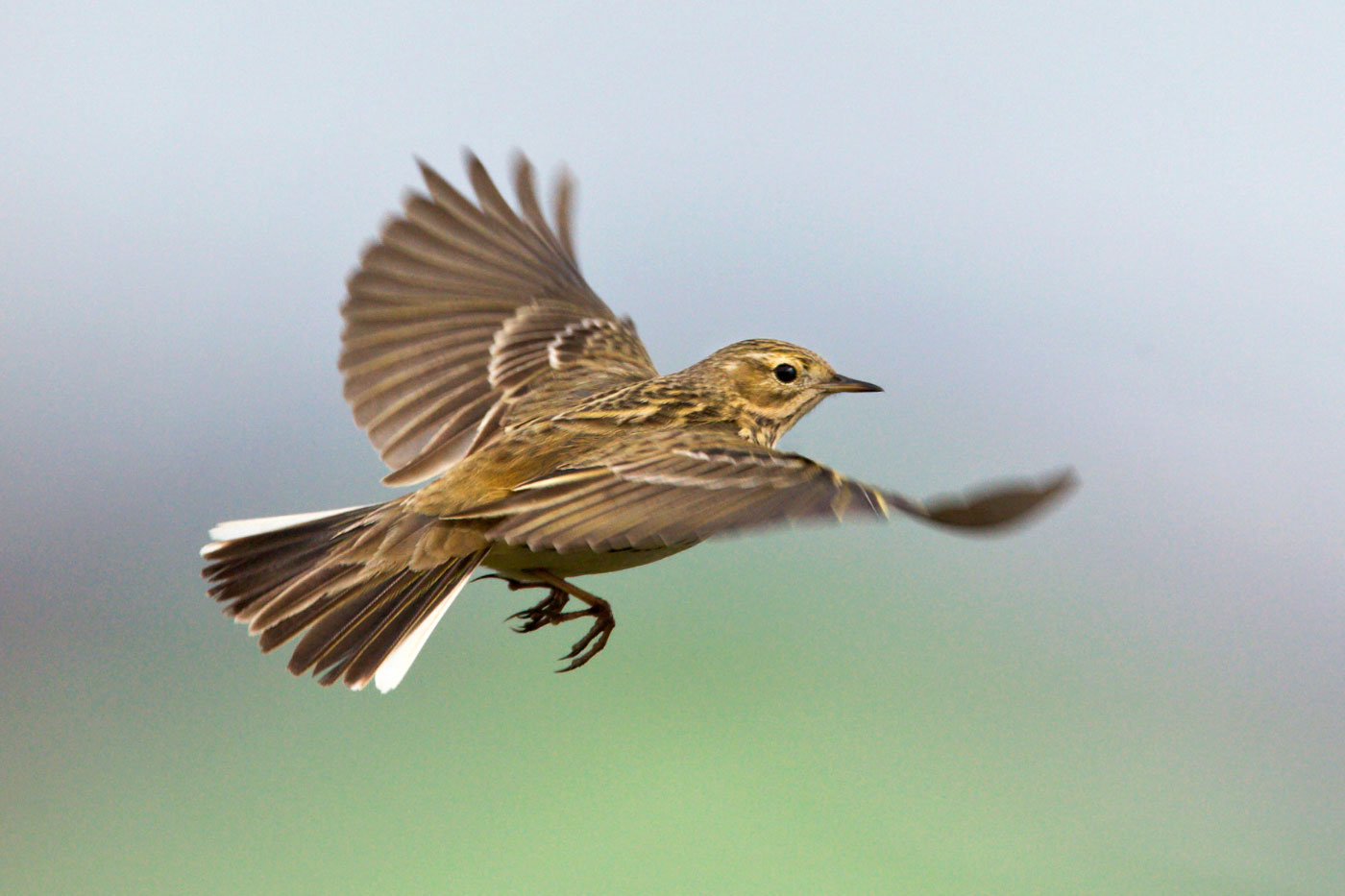 Meadow Pipit (Limburg, The Netherlands, 14 April 2008). This shot gives a good impression of Meadow Pipit's appearance in the air – somewhat delicate with a weak-looking, rather fluttery flight. The small, rounded head and slim body are also obvious here, as is the rather narrow bill. The white outer tail feathers are present in all pipits, but are always particularly prominent in this species which often flies with a rather loose, 'open' tail (Ran Schols / www.agami.nl). 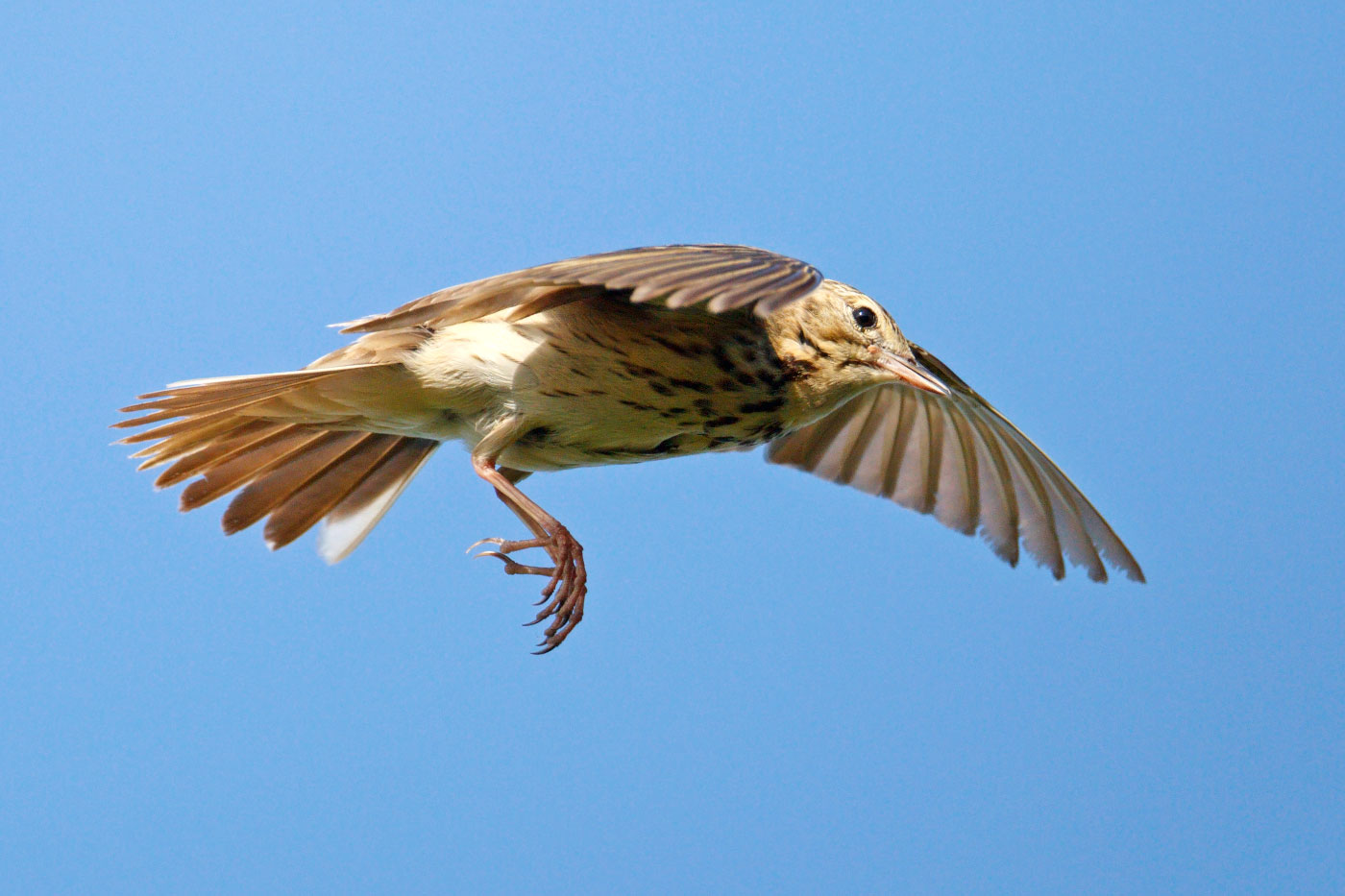 Tree Pipit (Nederweert, The Netherlands, 28 May 2013). The plump appearance, heavy-based bill, buff breast wash and contrast between heavy breast and fine flank streaking all suggest that this is a Tree Pipit, a diagnosis confirmed by its short hind claw. This is a displaying bird, therefore showing its white outer tail feathers, but flying Tree (and Olive-backed) Pipits generally keep their tails closed, flying off strongly with a deeply bounding flight (Ran Schols / www.agami.nl). 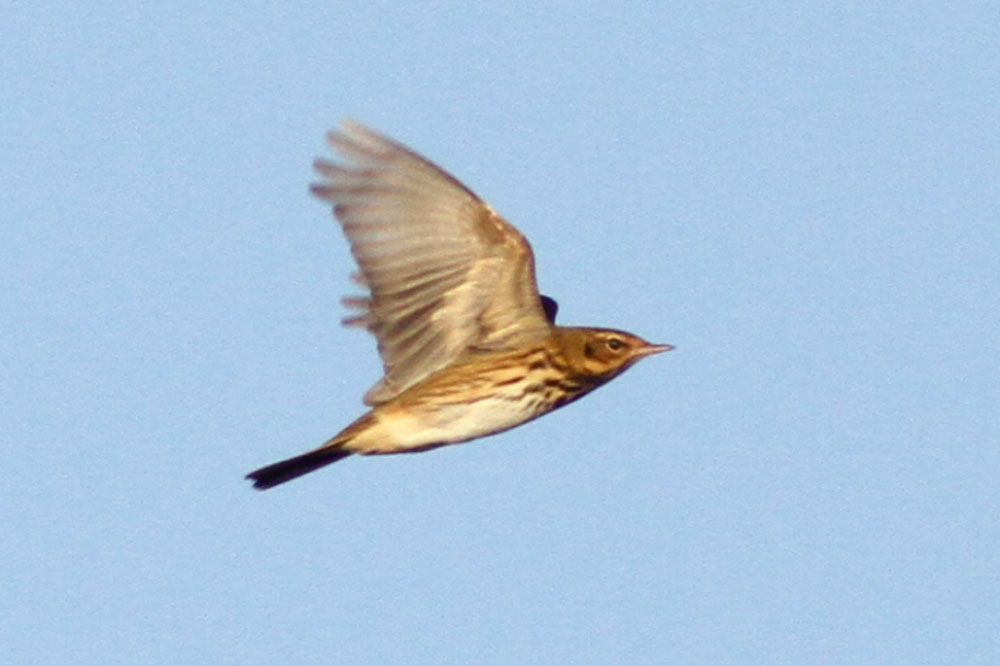 Olive-backed Pipit (Liaoning, China, 6 October 2012). In life, separating a fly-over Olive-backed Pipit from its closest relative, Tree Pipit, would be difficult, but just enough has been captured in this image. The plump, solid body shape, heavy black breast markings and fine flank lines are shared by both species, but also visible here is the typical face pattern of Olive-backed Pipit – a bold supercilium, buff before the eye, and dark and pale marks in the rear of the ear coverts (Tom Beeke). 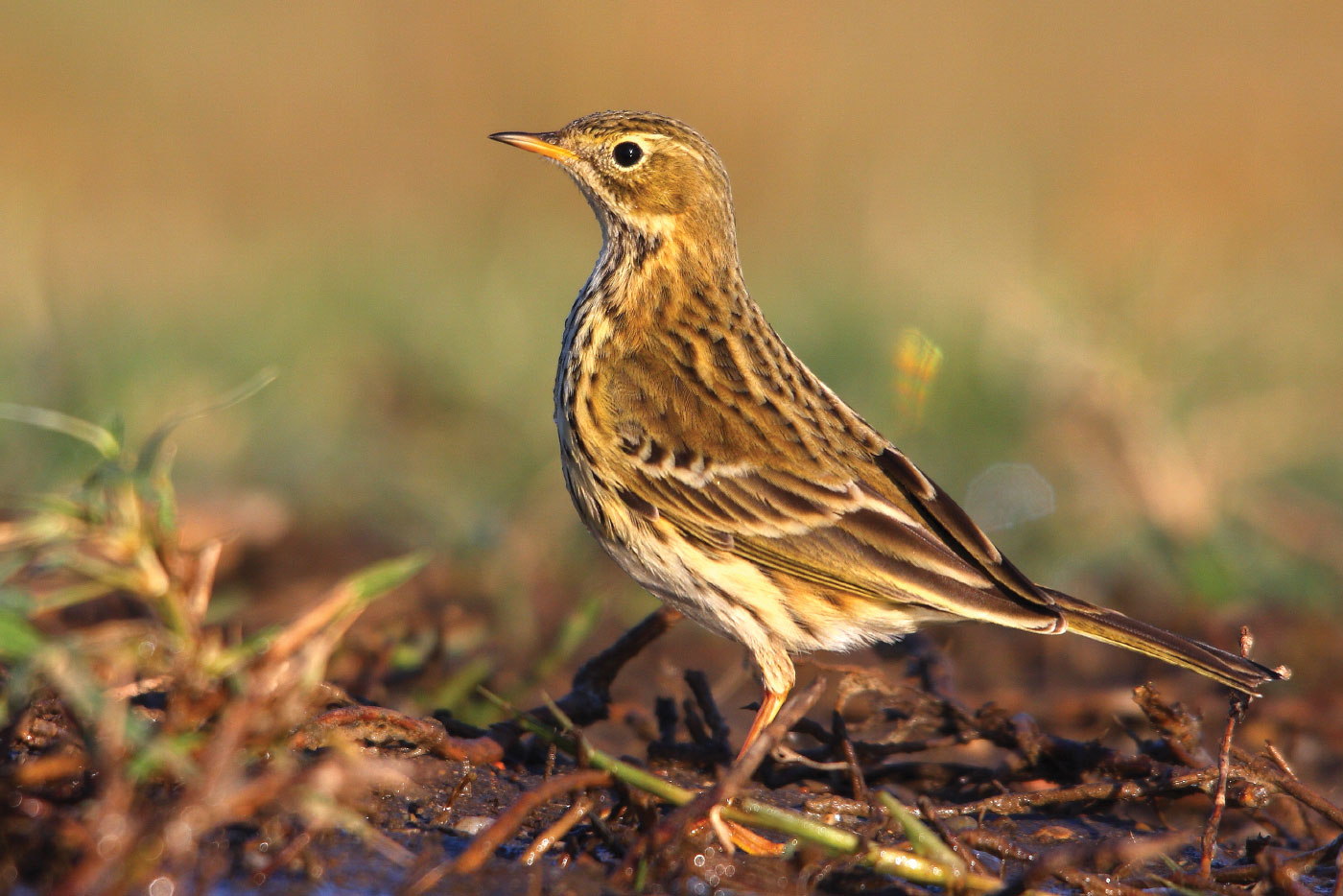 Meadow Pipit (Valladolid, Spain, 7 October 2011). The small head and body, spiky bill, relatively heavy flank streaking, prominent whitish eyering and pale-centred ear coverts all identify this bird as a Meadow Pipit. The overall plumage hues of Meadow Pipits are quite variable according to age and season. This bird is a typical warm brown colour, albeit in strange sunlight, but this species can also appear quite olive or a more washed-out grey (Carlos Bocos). 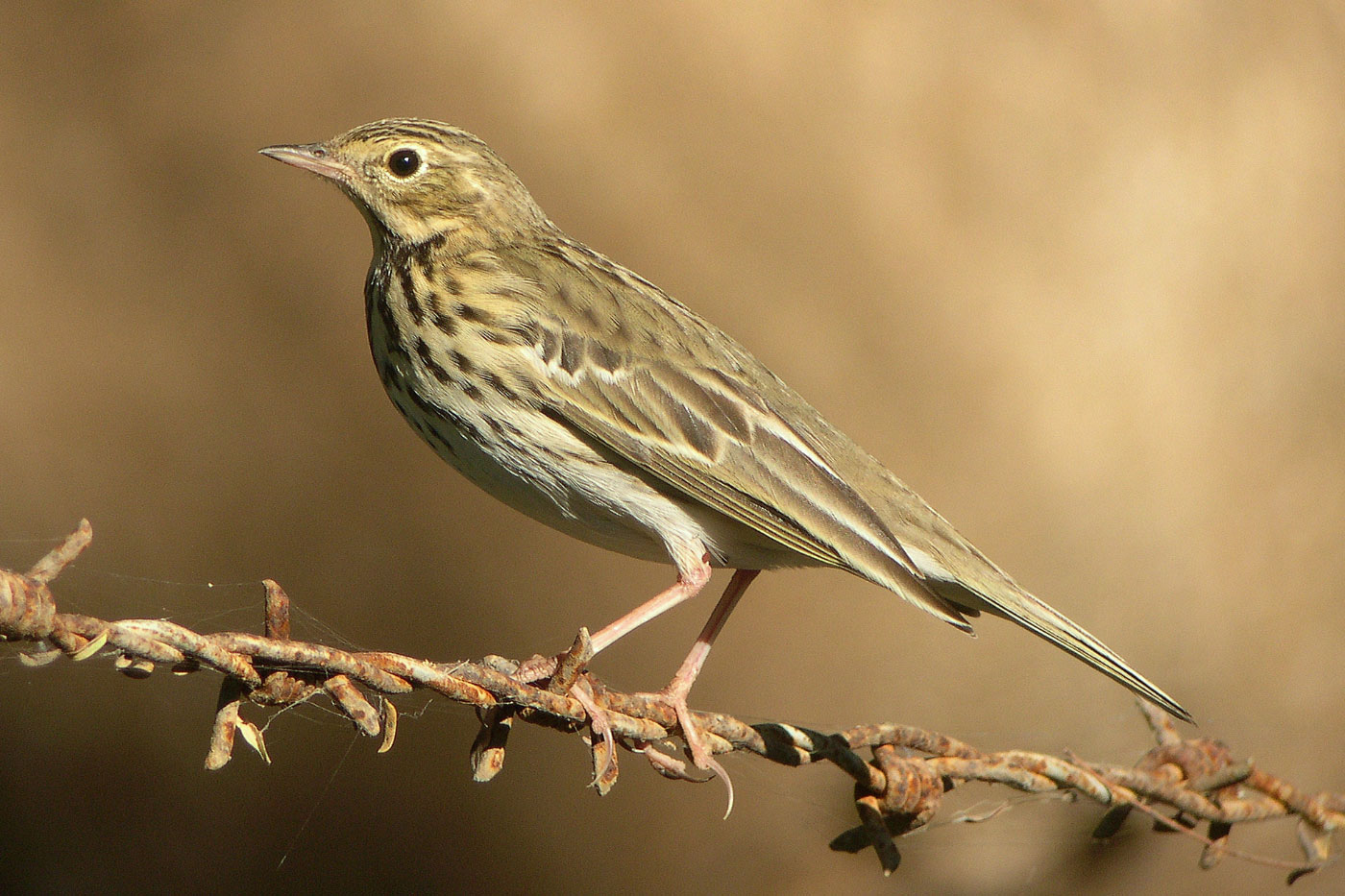 Tree Pipit (Ayn Razat, Oman, 5 November 2004). This bird looks long and solid bodied, with a deep-based, almost triangular, bill. With its unequivocally short hind claws, it is clearly a Tree Pipit. The plumage features are readily visible too – relatively plain ear coverts, a rather weak eyering, contrast between heavy breast and fine flank streaking, and a lovely buff wash across the upper breast (Aurélien Audevard). 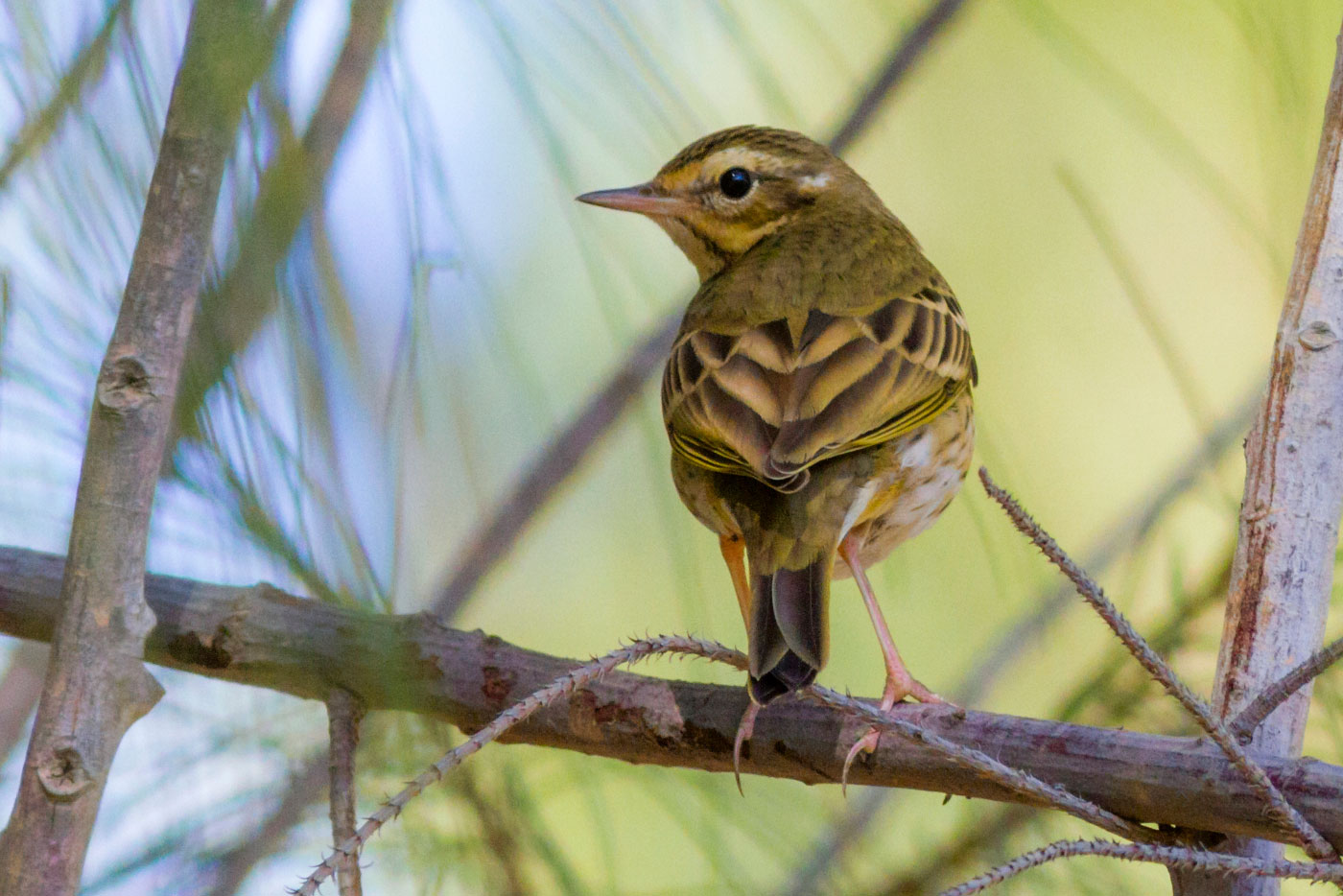 Olive-backed Pipit (Fuerteventura, Canary Islands, 30 December 2012). With its short hind claws, stout bill and tree-perching behaviour, this is clearly either a Tree or an Olive-backed Pipit. From this angle the identification is pretty straightforward, the combination of a plain unstreaked mantle, prominent supercilium (buff before the eye) and dark and pale marks in the rear of the ear coverts clearly indicating that this is an Olive-backed Pipit (Yeray Seminario).