These two very similar species are problematical to both beginners and experienced birders alike. Click here for a larger image. Illustration by Ren Hathaway.

Meadow Pipit is a familiar and often abundant bird throughout the year, although most of our breeding birds head south to winter in France and Iberia, with some reaching North Africa. The first returning migrants appear in February and peak passage is from mid-March to mid-April.

Tree Pipit is a true summer visitor, with the first birds returning from sub-Saharan Africa in late March and the bulk of passage taking place from mid-April to mid-May. As its name suggests, it is associated much more with trees than is Meadow Pipit, although it must be remembered that the latter frequently lands in the tops of trees and bushes, particularly when flushed. But Tree Pipits habitually use trees for both singing and feeding, when they may walk up and down the branches searching for food, constantly wagging their tails as they do so. I have never seen Meadow Pipits do this.

Tree Pipits are characteristically birds of heathland, forest clearings and young forestry plantations, with scattered trees and bushes usually a prerequisite. Meadow Pipit is a bird of open country, particularly common in upland areas. These habitat differences are often the first clue in the identification process, but do not rely totally on habitat, particularly at migration sites when the differences break down.

Meadow Pipit gives a simple accelerating series of tinkling notes as it rises in its display flight, succeeded by more musical notes and ending with a trill as it parachutes back down to the ground. Tree Pipit’s song is similar but it is louder and fuller: a rising ji ji ji ji ji see seeo seeoseeo seeo. The final far-carrying flourish may suggest the song of Chaffinch, and this phase of the song is often the first indication of the presence of a distant Tree Pipit. They usually sing from the tops of trees or parachute down into them.

This is the other key identification feature. Meadow Pipit has a familiar sip sip sip call when flushed or when passing overhead, the number of notes varying. Tree Pipit has a somewhat explosive, more rasping zeep or speez – this is particularly useful when picking out overhead migrants. The call perhaps suggests a short, abrupt, explosive version of Redwing’s call. 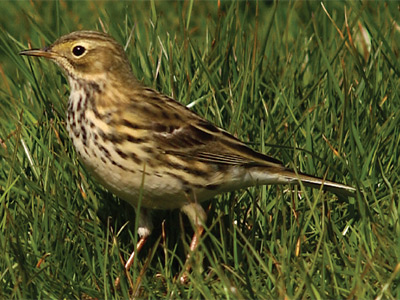 Meadow Pipit (Merseyside, April 2005). Plumage differences between Meadow and Tree Pipits are subtle, but key among them is how the breast streaking extends boldly down the flanks. The rather plain, bland face is dominated by the pale eyering. The bill is slimmer and the wing markings are not very prominent. Photo: Steve Young (www.birdsonfilm.com)

The two species are of course similar, but in fresh plumage Tree Pipit usually shows rich buff tones to the face and breast, which Meadow Pipit lacks, having instead a colder buff background colour to the face and underparts. Most significant is that Tree Pipit has only fine ‘pencil’ streaking on the flanks. This means that, from any distance, it looks as though the underpart streaking is confined to a broad band across the rich orange-buff breast and this contrasts with a whiter belly. Meadow Pipit’s breast streaking extends quite noticeably down the flanks, so it fails to show Tree Pipit’s more discrete breastband. In addition, Meadow often shows a blotchy spot in the centre of the breast where the black streaking coalesces (although Tree Pipit can show a similar mark).

Tree Pipit is generally a better marked bird than Meadow, with a noticeable supercilium that is most obvious behind the eye. It sometimes shows a faint ‘supercilium drop’ – a separated pale spot at the rear of the ear coverts. It also has a stronger eye-stripe, stronger lateral crown stripes and a more obvious malar stripe. The wing markings too are more contrasting, often with a prominent black median covert bar (recalling Tawny Pipit) and with whiter and more prominent wing-bars.

In comparison, Meadow has a plainer, more open face in which the creamy supercilium and pale eyering may be the most obvious characters. It often lacks much in the way of a dark eye-stripe, particularly in front of the eye. The wings too are less contrastingly patterned. 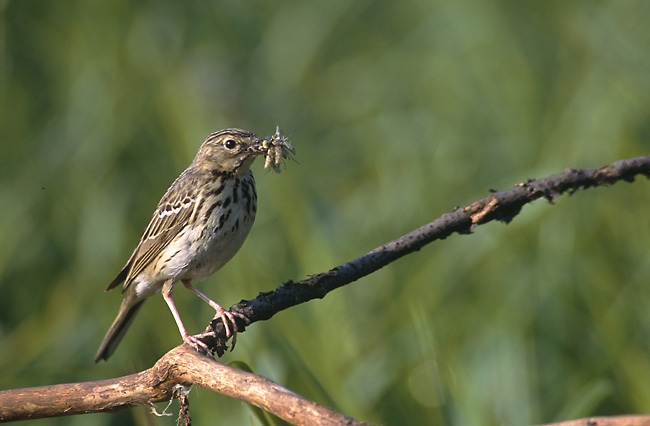 Tree Pipit (Poland, April 2005). Note how the underpart streaking is confined to a band across the breast, with only very faint ‘pencil streaking’ down the flanks. The face is dominated by the supercilium behind the eye. Tree Pipit has a thicker bill than Meadow, and note also the prominent white-fringed black median covert bar. Photo: Marek Szczepanek (GFDL)

Tree Pipit is a longer and sleeker-looking bird than Meadow Pipit, which is rather round-headed and less streamlined in comparison. TreePipit’s stronger, sturdier, heftier bill often looks up-tilted from the face; it thus shows a more wedge-shaped bill profile than the weaker-billed Meadow Pipit. Overhead migrants show longer and more pointed wings, producing a stronger, more powerful flight than Meadow Pipit. As a consequence of its shorter, more rounded wings, the more sedentary Meadow Pipit has a weaker, more hesitant flight action. Although these structural differences are subtle, they are nevertheless quite distinctive with practice.;

All pipits vary considerably as a consequence of plumage wear. As the brown feather fringes wear away, the dark centres to the upperpart feathers become more obvious, so mid-summer pipits of both species often look darker above, colder below and distinctly tatty, especially when feeding young. In contrast, fresh autumn birds are more buffy, and Meadow Pipits at this time of year often have a distinctly olive tone to their upperparts.

Note also that both species have different alarm calls when feeding young. Meadow repeats a soft, nervous sitip or sidup, while Tree Pipit gives a soft tip or a high-pitched, ringing stick when really nervous. Such calls are quite unlike the usual flight calls!