The diminutive Little Tern is one of world’s smallest terns, and the sight of it hovering by the shore giving its excited chittering make a summer’s walk along the coast especially pleasurable.

There are six subspecies: albifrons, found in Europe, North Africa and western Asia; guineae, in west Africa; innominata of the islands in the Persian gulf; pusilla, found in India to Indonesia; sinensis, in east Asia to Micronesia and Hawaii; and placens in eastern Australia. Migrants can be encountered around much of the African coast, off the western coast of India, and around the coasts of South-East Asia and Australasia.

Originally placed in the genus Sterna with other, larger terns, it is now in a separate genus Sternula, along with the closely related Saunder’s S saundersi and Least S antillarum Terns. The latter, from North America, was recently split from Little Tern and has been recorded once in Britain.

The world population is between 70,000 and 100,000 pairs. Some 17,000-22,000 pairs breed in Europe, where it breeds as far north as Finland. It can be found inland in many parts of the Western Palearctic, along major rivers and formerly on the Danube, Elbe and Rhine.

In Britain it breeds mainly on the east and south coasts of England, although birds are also in Wales and Scotland, where it is found on the Outer and Inner Hebrides, the Orkneys and on the east coast. Birds from British colonies have subsequently been seen at colonies in The Netherlands, Denmark and Sweden.

Little Tern colonies are often at traditional sites from year to year, but occasionally birds will, for no obvious reason, relocate to other colonies. A survey in the 1980s found about 2,500 pairs in Britain and another in 2000 found about 2,000 pairs. A 2008 estimate gives 1,900 pairs in Britain and about 300 pairs in Ireland. Its recent decline and localised populations mean that it is on the Amber list of birds of conservation concern in Britain. As such, tern colonies are protected, and are roped off to prevent disturbance. When visiting please ensure you respect these areas. 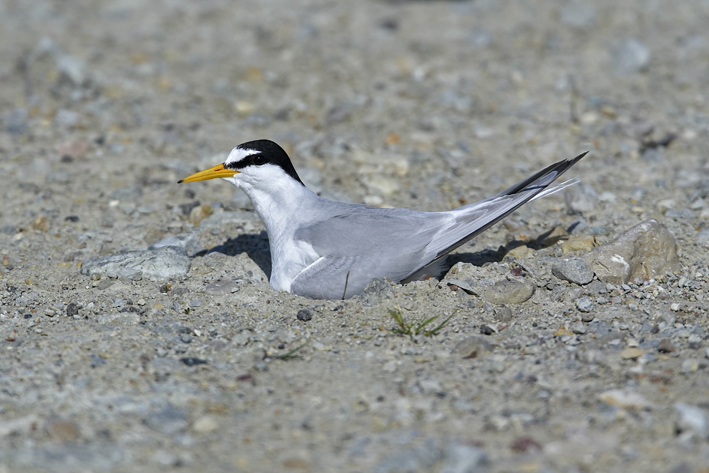 Little Tern breeds in colonies on shingle or gravel beaches. These colonies
are protected by law, so when visiting be very careful not to cause disturbance.
Photo by Markus Varesvuo (www.birdphoto.fi).


A summer visitor to Europe, the species arrives from mid-April and there is an obvious spring passage through the English Channel during the last week of April and the first of week of May.

Birds leave again in August and September, heading for their wintering grounds, which are probably off the coast of West Africa between Senegal and Ghana, possibly reaching down to South Africa. Large concentrations have been seen off the coast of The Netherlands in late August and may involve birds from many of the North Sea colonies. Birds then pass down the coast of western Europe, past Portugal to West Africa. Unlike other migratory terns, it is seldom found far offshore. Some European birds cross central Europe on migration, following river valleys.

Predation can be a problem at Little Tern colonies, where birds like Kestrel, Carrion Crow and Black-headed Gull, as well as mammalian predators such as Hedgehogs, Stoats and Foxes, can take a large number of eggs and young. To counteract this, alternative food has been provided for Kestrels to reduce the levels of predation at some sites. Nests can be close to the high tide line and may suffer from extreme high tides.

The species is best looked for at traditional colonies, but can be seen on passage and may also be encountered at inland sites, especially reservoirs and gravel pits, during spring and autumn migration. Beach-nesting colonies are particularly vulnerable to disturbance and nests can be difficult to see, so keep clear if birds show any signs of distress.

Little Terns breed at traditional sites, and the ones listed below are those which have the largest populations. In some years birds may relocate to other colonies.