While many Common Buzzards are already on territory by May, Honey Buzzards are mostly just returning from their African winter quarters, timing their arrival with the availability of wasps for food.

A traditional birding ID quandary, in spring prolonged observation should enable you to separate the two species. While the two are similar in size and variability, structure and flight style are subtly different. Honey Buzzard soars on flat, proportionately long, narrow wings with a slight bulge in the outer secondaries and a noticeable ‘pinched-in’ look to the rear base of the wings. It has a smaller head, which appears to stick out more than its commoner relative, often likened to a cuckoo or pigeon, while the tail is longer and somewhat paddle-shaped when closed.

Spring birds will be adult, and good views should reveal a grey upper head and a three-barred uppertail in a typical bird, as well as considerable well-spaced longitudinal barring on the underwings. There will also be a thick black trailing edge to the secondaries, and barring over the whole of the underparts. However, there is considerable variation in actual plumage colours, with birds ranging from very pale with dark carpal patches to very dark but with black-and-white underwings – observation of structure is crucial

Adult Common Buzzards will look chunkier and more compact, with an overall brownish colour. The underwings are dark brown on the coverts with darker carpal patches, but pale largely unbarred flight feathers with dark tips to the primaries only. The appearance of darker ‘trousers’ and chest and head also helps with ID – Honey Buzzard tends to look more uniform and hooded from underneath. Closely observe any Common Buzzards you see, especially those with less usual plumage, and their structure will become second nature, enabling you to eventually pick out Honey Buzzard from some distance, with care.

The Raptors of Europe and the Middle East: a Handbook to Field Identification. 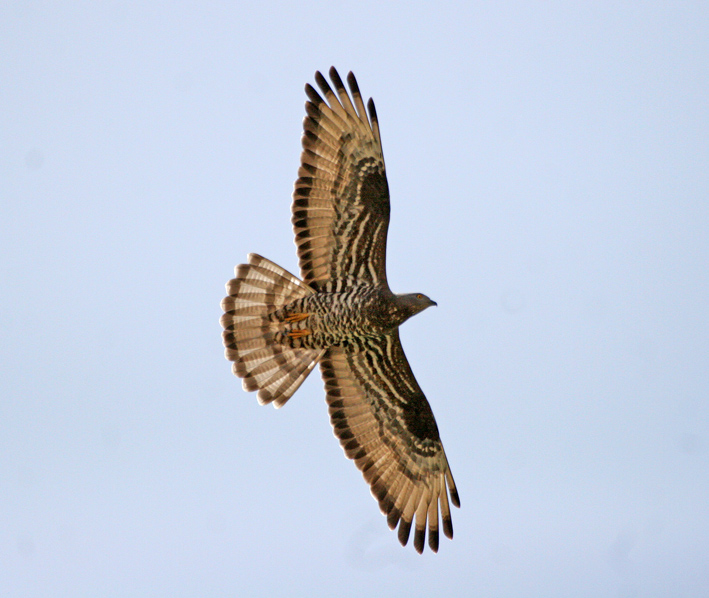 Honey Buzzard (Ne'ot Smadar, Israel, 8 May 2005). This bird shows the typical small
'pigeon-headed' look of the species, as well the 'pinched in' wing bases and three tail bars.
Photo by Dominic Mitchell (www.birdingetc.com).
Content continues after advertisements
Login to leave a comment
Return to List