On 17 October 2008, Craig Thomas and I witnessed a remarkable arrival of Redwing on the East Yorkshire coast. Birds started arriving at Flamborough Head at 9.30 am in a light south-west breeze, heading inland to the west and north along two narrow fronts. A total of 17,175 Redwing arrived and moved through that day. It was a stunning spectacle and a scale of movement we thought we might never witness again …

However, on Monday 12 October 2020, the weather forecast looked promising for another big influx of Redwing. Birds were already arriving on the south coast, with no fewer than 17,100 being seen moving south-west through Twesledown, Hampshire, by John Clark and Graham Stephenson that day. The Met Office was predicting that, overnight, the winds would switch from north-west to north-east and a rain-front was forecast to be stationary over Flamborough Head eastward across the North Sea by dawn. 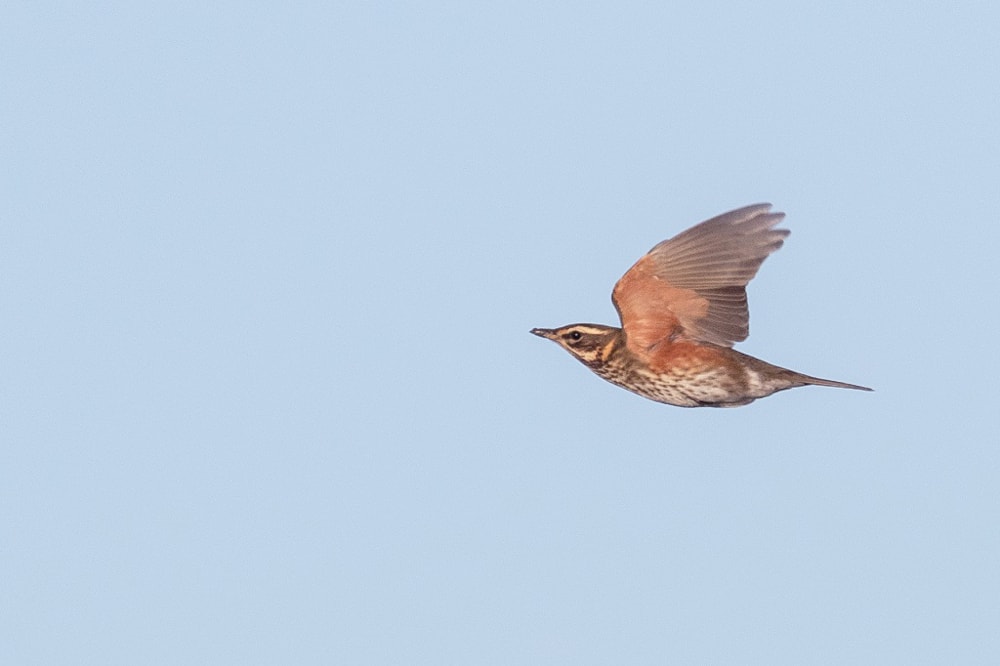 By mid-morning on 13 October, it was clear that something very special was unfolding on the Yorkshire coast (Alex Perry).

I anticipated that any Redwings continuing to push west from Denmark in the easterlies could be channelled along the southern edge of the rain front and pour into the UK at Flamborough. Then, preferring to travel into a headwind, they would reorientate and head north-west over Speeton and be viewable from Hunmanby Gap – my patch! Well, that was my idea anyway.

On 13 October, I awoke early in eager anticipation. It was grey, the wind was a light northerly; everything looked good. However, by 9.30 am, barely a bird had moved through Hunmanby Gap and my hopes were dashed. Nevertheless, a WhatsApp update from Flamborough Bird Observatory said Lee Johnson had seen some 3,500 Redwings and a couple of thousand Fieldfares move west over Old Fall, Flamborough Head. Why were the birds not heading into the wind and over Hunmanby Gap? I wanted to find out.

I drove a short distance south, climbing the hill on the edge of the Yorkshire Wolds to Speeton. Here, a few hundred feet above sea level, the cloud was low with a constant light drizzle and there were no thrushes or any tangible movement. However, to the south I could see a light glow – the skies were clearing over Flamborough Head. I wondered whether the arrival was underway as predicted, but the birds were heading inland to the west and south along the edge of the front, thereby avoiding the poor weather over Speeton and further north.

I continued my drive south, stopping in a field entrance just south of Bempton village, overlooking Flamborough village and Sewerby. I quickly tuned into a distant flock of thrushes – mostly Redwing – heading south west towards Bridlington; there were 250 or more birds, which was an impressive start. Interestingly, and unbeknown to myself at the time, the birders on the Outer Head considered that the thrush movement had stopped once the sky had cleared, but it soon became apparent that this wasn’t the case.

I set my scope up and scanned the distant flock, tracing it back east, to Flamborough. The flock went on and on … 1,000 ... 2,000 ... then more than 3,500 birds. Other thrushes were now dropping out of the clearing skies, presumably attracted by the mature trees of Danes Dyke and Sewerby Hall. Birds that had flown lower along the south side of Flamborough Head were joining what was now a procession of thrushes. As I was counting these distant flocks I could hear the tseep of more calling Redwings, the chack of Fieldfares, sic of Song Thrushes and the occasional soft drawn out swee of Blackbirds flying overhead. 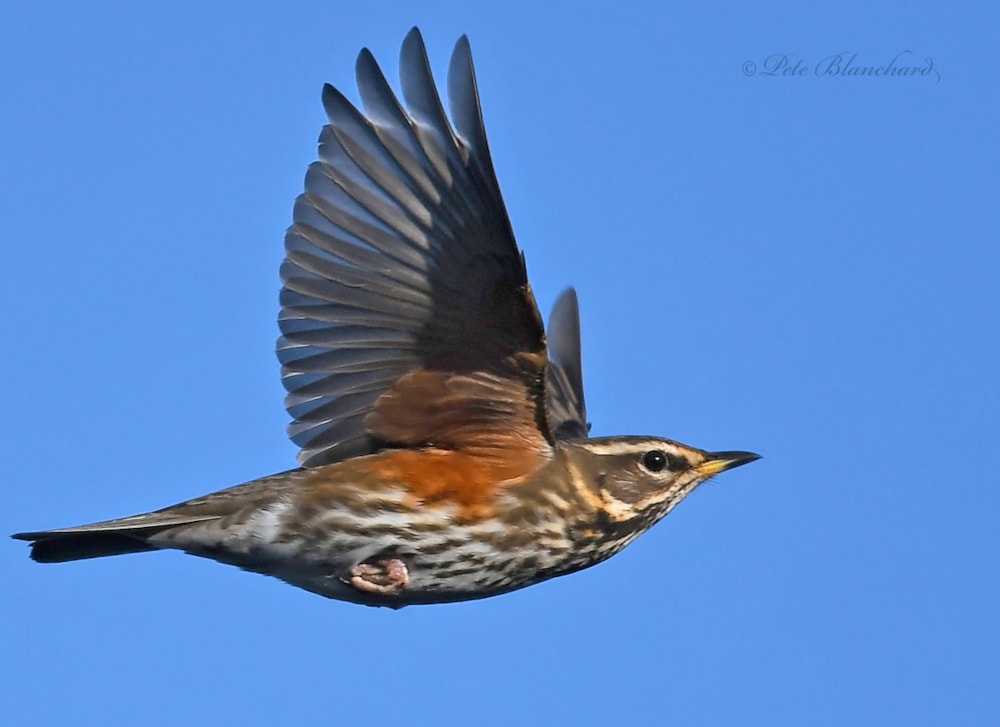 No fewer than 32,080 Redwings passed over Flamborough Head on 13 October, along with thousands of Fieldfares, Blackbirds and Song Thrushes (Pete Blanchard).

It was extraordinary – I could not believe the scale of the movement. By 11.15 am, I had counted more than 10,000 Redwings and 2,500 Fieldfares, but I was missing too many birds and there was no sign of the movement abating. I rang Craig Thomas, with whom I’d shared the 2008 Redwing influx, to see if he could help. Within minutes Craig had joined me. We agreed that the best option was to change our position and see if we could find a viewpoint on the south side of Flamborough Head. Craig agreed to do a recce and, en route, call in at home to pick up his impressive Swarovski 115 'scope to help spot distant flocks, while I continued to count from near Bempton village.

Craig quickly worked out that the majority of birds were passing over Bridlington Links Golf Club and he established a new watchpoint in the car park. Having kept the count going while Craig had relocated, I was able to then move down while he started to count. Incredibly, by 1 pm, we'd counted more than 21,200 Redwing and 4,445 Fieldfare. A series of showers brought a temporary halt to the passage, forcing birds to drop into the nearest woodland, but as soon as the rain stopped it was business as usual with birds moving west along the south side of Flamborough Head and south along the line of Danes Dyke, the heavily wooded Iron-Age ridge that runs north to south and cuts Flamborough village off from the rest of the world! At South Dykes, the flocks merged before heading off west inland.

Gradually, through the afternoon, the volume of movement started to reduce and flocks became tens of birds rather than hundreds, giving us more chance to scrutinise what other birds were moving. The number of Fieldfares peaked early morning, with Blackbirds and Song Thrush numbers possibly increasing in the afternoon.  We also managed to pick up a lone Hawfinch and a Ring Ouzel among the myriad Redwing.

By the end of the day the movement had all but stopped. A check revealed a total of 32,080 Redwings, 4,494 Fieldfares, 434 Blackbirds and a massively underestimated 35 Song Thrushes. In addition, at dusk an additional 750 Redwings were grounded on the outer head, along with 940 Blackbirds and 250 Song Thrushes, while the day ended with a total of 14 Ring Ouzels.

It had been an exhilarating and exhausting experience – the scale of migration was epic and a quick check on the wonderful visible migration database Trektellen revealed that this was the third-highest UK count recorded on their database (although there will doubtless be higher counts hidden in local bird report archives). Trektellen also revealed that, while we were witnessing the Redwing phenomenon at Flamborough Head, a remarkable 255,676 Redwing passed south through De Vulkaan, near The Hague in The Netherlands.

The magic of migration takes many forms and the sheer scale of Redwing passage on this day will stay with us for the rest of our lives.