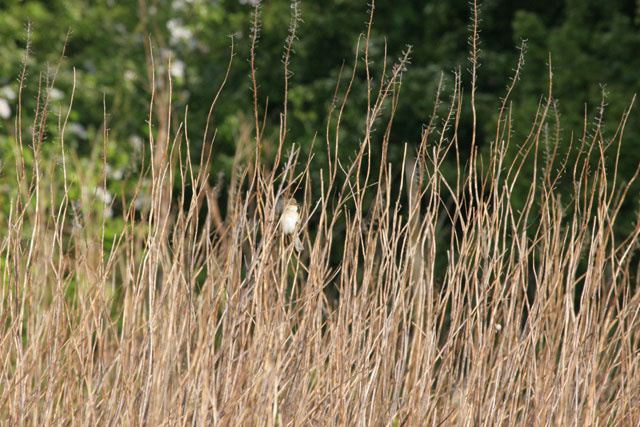 The Marsh Warbler was first recorded in Britain in the 1860s and by the end of the century there had been records from several 'southern' counties north to Worcestershire and west to Dorset and Somerset. Regular low-level breeding was established in Hampshire, Gloucestershire and Worcestershire.

In the twentieth century the total British population peaked at 100-120 pairs with a small population flourishing in the Avon and Severn valleys. By the mid-1990s, numbers had fallen dramatically and a major shift in population had occurred from the Midlands to southeast England.

More recently the species has declined catastrophically in the southeast but a great deal of evidence suggests a further switch may be occurring with it becoming much commoner in northern Britain. The Birds of Shetland notes that since 1970 more than 315 had been recorded with over 90% of these in spring. Historically it was much scarcer. In 2002 the first breeding occurred on Shetland following on from the first breeding in Orkney in 1993.

So what is going on? The history of this species in Britain is dominated by England and, in its broader sense, southern England. From the first Marsh Warbler record in Hampshire in the mid-nineteenth century to its west-Midlands period in the mid-twentieth century, and then to the dominance of the south-east in the late twentieth, it has been an essentially southern bird. So why all these Shetland records?

Is the Shetland phenomena simply a case of increased observer familiarity with the species and therefore not the result of a discernible trend? Let's consider records from the Isles of Scilly. These are well-watched islands, less so in the spring than the autumn admittedly, but equally a spring Marsh Warbler is quite likely to be singing and therefore one might expect it to be found. The Birds of the Isles of Scilly notes that the first record for the islands was of a bird trapped on St Agnes in October 1959. Up to 1999 there were a further 25 records. These 26 individuals break down as follows: two in 1959, four in the 1960s, four in the 1970s, seven in the 1980s and eight in the 1990s. As might be expected, given the number of observers present in autumn, the majority of records (23) are from that season. A gentle increase in numbers over time perhaps, but hardly in line with that of Shetland.

We need to look beyond Britain to answer this conundrum. If we take too much of a parochial view of our wildlife we will always miss the bigger picture. The landmark EBCC Atlas of European Breeding Birds is a fittingly big book to provide that picture. The author of the Marsh Warbler species account, Karl Schulze-Hagen, notes that the species "has extended its range markedly since 1900, mainly at the northern limits."

For instance, in the period 1970-1990 numbers in Estonia, Finland and Sweden increased by more than 50%. Seen over a longer period the increase in Sweden is astronomical. Holmbring (1982) describes a Swedish population of around 300 pairs confined primarily to Skane. By the late 1970s there were around 15,000 pairs covering the southern third of the country (Risberg 1990).

So how about Norway? Syvertsen (1992) describes the same phenomenon for Shetland's Scandinavian neighbour. The first record was an autumn migrant trapped as recently as 1967, followed by the first breeding in the Oslofjorden area in the 1970s. In 1988 breeding records were no longer unusual enough to be considered by the national rarities committee and it was considered that in 1987 the population might be in excess of 100 pairs.

Schulze-Hagen notes that in several areas of Europe range extension has been "somewhat less" apparent. Notably, from the perspective of the English population, this includes eastern and northern France, along with western Switzerland, northern Italy and Greece. Stasis in the south, expansion in the north. Could this be a result of climate change - are conditions now more suitable in the north? In addition to Britain only two countries cited in the EBBC atlas have shown slight declines: the Czech Republic and Moldova.

So could the east coast benefit from the burgeoning Scandinavian and Baltic populations? Numbers of other 'eastern' migrants, such as Common Rosefinch or Greenish Warbler are higher from Shetland to East Anglia than they are throughout the rest of the country.

In Yorkshire the pattern closely mirrors that of Shetland. Prior to 1960 there were records of singles in 1928 and 1933, with the third county record in 1963. Between then and 1992 there were 69 records (the vast majority spring records with a quarter of these in spring 1992). Breeding occurred for the first time in the county in 1999 (two pairs) and again in 2001 at a different site.

Taylor et al. (The Birds of Norfolk, 2000) note that the first "fully accepted" Norfolk record was of a bird shot at Blakeney in 1923 and that the next record was at Sheringham in 1983. Since that bird broke the long absence there have 36 records and only two 'missing' years. With apologies to birders from other counties, mine included, Norfolk is probably the best-watched county in the UK and has been for many years. It is highly unlikely that this increase is an artefact of increased birder familiarity or increased birder hours.

Norfolk's East Anglian partner, Suffolk, had its very first record as recently as 1986, but since then Marsh Warbler has been annual (c.35 records up to 2001) and "singing males are increasingly found frequenting suitable nesting habitat which is perhaps an indication that breeding will soon take place in the count" (The Birds of Suffolk, Piotrowski 2003).

The evidence certainly suggests that the next chapter in the Marsh Warbler's history has already started.

Marsh Warblers require a matrix of sturdy herbaceous plants in which they can make their nests. Beds of willowherb species are commonly used but other robust herbs, including Stinging Nettles, Hemp Agrimony or Rose species, are often used. Dead stalks from the previous year will be required and the site will need to be sheltered from the wind. The site can be a dry area, or at the margins of a wetland, but must contain song posts (usually emergent roses, hawthorns or the saplings of various trees). In wetland sites the stems of coppiced Osiers have been utilised as nest sites. Note that given this species' use of wetland areas it is not unusual for it to be found singing from Phragmites, though not typically from the centre of a large reedbed.

Looking now at Reed Warbler, although as the name implies this species is a Phragmites specialist, it is regularly encountered singing in other habitats, including willowherb. Indeed, given the relative scarcity/abundance of Marsh/Reed Warbler, an 'Acro' singing in willowherb is statistically far more likely to be a Reed Warbler. And this does not just apply to migrants. In the last two years Reed Warblers have summered, and bred, at two traditional Marsh Warbler breeding sites at one location in Kent, a considerable distance from the nearest reedbed. 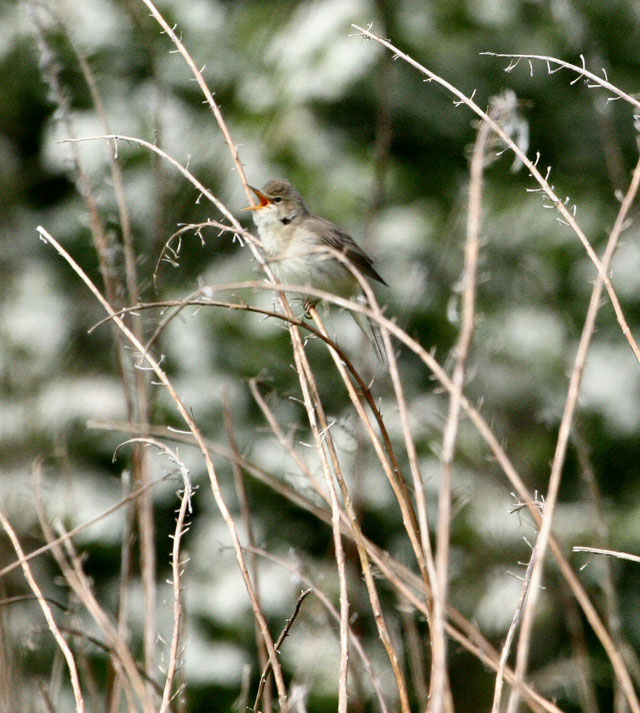 Silent Marsh Warblers are very difficult to identify, and remember: just because it is in willowherb it does not mean that it isn't a Reed Warbler. However these plain birds have a very distinctive song. It is loud, rapid and possesses elements and phrases copied from other species. The roosting calls of Blackbird, the flight song and alarm calls of Swallow, alarm calls of Blue Tit and the song of Goldfinch are amongst the commonest elements whilst an astonishing array of other species as unlikely as Kingfisher, Curlew and Common Tern can be heard! Additionally, as many African species are mimicked as those from Europe. From the time of arrival, until the time that the birds 'pair up', song is usually vigorous and continuous. 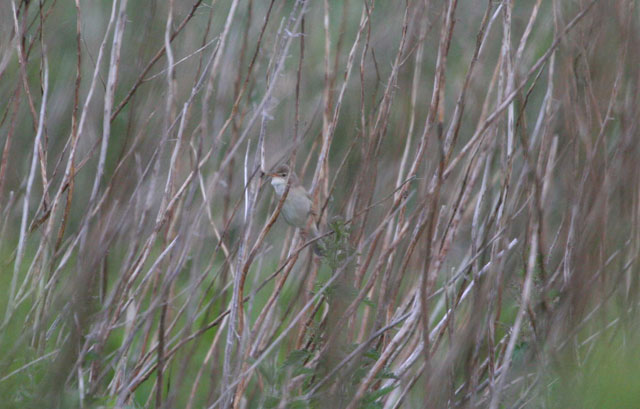 Having described this ultra-distinctive song it is important to sound a major word of warning. Reed Warblers are not-infrequent mimics of a wide range of species. The key difference in song is the bewildering excitable pace and variety of Marsh Warbler with its rapid trills, whirrs and whistles with see-sawing changes in pitch, often starting with monotonously repeated mimicry of, say Blue Tit or Blackbird calls. They rarely sound like 'Acros' with the typical Reed/Sedge song structure. Reed Warblers, even those that are good mimics, still maintain this structure i.e. a burst of mimicry (sometimes sustained, typically short) will typically be followed by a return to the monotonous slow-paced chret chrett chrett chirri chirri chru chru chru, etc.

If readers only take one thing away from this article it is, I hope, the fact that Reed Warblers are mimics. Not in the same league as their rarer cousins, the Marsh Warbler, but in some extreme cases not far off them. The second point I would like readers to assimilate is that ecological separation of the two is not so clear-cut that identification can be based upon where an 'Acro' is found. Reed Warbler in reed-beds, Marsh Warbler in stands of Rosebay Willowherb, is only a rule of thumb and given that one species is so much commoner than the other in any habitat a rather poor rule of thumb.

And finally...having been involved in the RSPB monitoring effort for this species in recent years I have watched at first hand the alarming decline in fortunes of this species. If birders do have the good fortune to find a Marsh Warbler, please use discretion. If breeding may be a possibility make a phone call to the local RSPB Species Protection Officer your first priority. This is a species that has suffered at the hands of egg-thieves.