These two species have long posed identification headaches, as they are very similar in appearance and may co-exist in the same habitat. Moreover, both have undergone severe declines and contractions in their ranges since the 1970s. 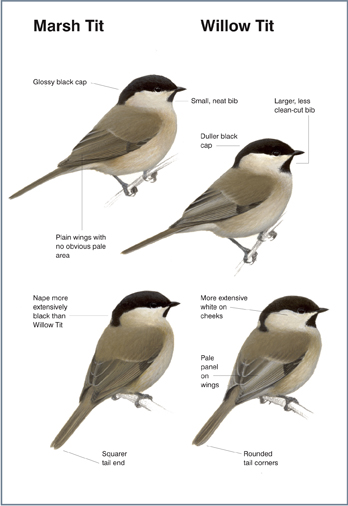 The causes of this are not known for certain, but may include woodland drainage, losses of dead wood and a thinning of the shrub layer due to overgrazing by deer. Nest predation by the increasing Great Spotted Woodpecker has also been blamed for the decline of the Willow Tit. The latter seems to be retreating northwards, whereas Marsh Tit appears to be retreating southwards.

Rather worryingly, Marsh Tit has also declined in France and elsewhere in north-west Europe, and on such a scale that conservationists now say its European status can no longer be considered ‘secure’ (Baillie et al 2005).

This not only makes all sightings of either species more notable, but means that newcomers to birding will inevitably find it harder to gain field experience when it comes to their separation.

Visually, the two species are difficult to separate, and a key feature is the call.

The first clues may be provided by habitat. Despite its name, Marsh Tit is a bird of mature or semi-mature deciduous woodland, where it can often be found grovelling in the understory. Willow Tit, on the other hand, is a bird of wet woodland, such as alder carr. Like Marsh Tit it often feeds low and unobtrusively. It also occurs in mature coniferous plantations, where it can be found surprisingly high in the tree tops, sometimes feeding on larch cones in the manner of a Coal Tit.

Willow Tit looks bull-necked and large-headed, and has rather ‘loose’ plumage compared with Marsh Tit. It has a larger swathe of white curving up behind the eye and sweeping back across the cheeks to the nape. The greater extent of the white results in a longer black dividing line down the nape. Some Willow Tits, however, have a rich buff face, rather than white. On Marsh Tit, the white face does not curve up in such a broad swathe behind the eye, which means that Marsh Tit’s black cap really does look like a cap. On some, the obviousness of the white face may be further reduced by the fact that the back of the face is somewhat greyer.

Willow Tit’s bib is slightly larger and the lower edge is more diffuse; sometimes it extends diffusely to either side, covering a larger area of the throat. Marsh Tit has a small, discrete ‘Hitler moustache’, but the edges of this may also be somewhat blurred and messy.

The crown of Willow Tit is matt black, whereas that of Marsh Tit is glossy, but note that juvenile Marsh (mid- to late summer) also shows a matt crown.

One of the most obvious differences is that Willow has pale fringes to the secondary feathers, forming a discrete panel on the closed wing.This is most obvious when the feathers are fresh but may be significantly reduced on worn birds, to the point where the panel is not at all obvious. Marsh Tit looks noticeably plain-winged. There are narrow brown edgings to the tertials, secondaries and primaries, but these are not to be confused with the more discrete and contrasting pale panel shown on the folded wing of Willow Tit

Willow Tit has rounded corners to the tail, but these are not obvious.

One behavioural point that may be useful in spring is that Willow Tit excavates its own nest hole in rotting wood, whereas Marsh Tit uses existing tree holes.

The best way to separate the two species is by call. Like all tits they have a variety of calls, but both give loud and distinctive notes that allow for easy recognition.

Marsh Tit’s diagnostic call is often described as a‘sneezing’ pitchou. It is perhaps more accurately transcribed as a double-noted si-soo, si-swee, swe-oo or squeesoo, often extending into, for example, swip swipzu zu or squit zee zee zee. The important point is that the first part of the call – a rising si, swip, squee or squit – has an abrupt, rather explosive quality.

Where confusion may arise is when this more explosive first syllable is omitted, leaving only the second part: for example, a zu zu, a zeezee zee or a zwee zwee zwee zwee. Inexperienced observers may confuse this with written transcriptions of the call of Willow Tit. It must be stressed that the quality of the two calls is totally different, the higher-pitched, rather jaunty calls of Marsh Tit being unlike the deep, slow, emphatic tones of Willow Tit. As a final point: beware of the occasional mimic Great Tit.

These are less useful. When feeding, Willow Tits may give soft see see see contact calls and a very high-pitched sit call. Marsh Tits give a swit swit or quite a hard, explosive tip tip tip tip in flight, more in keeping with their pitchou-type call.

Marsh Tit has a variable song. Cramp and Perrins (1993) mention three main song types, but one study identified as many as 37! All song forms are typically tit-like, such as a rapid ringing swe swe swe swe swe swe. Willow Tit, on the other hand, has a high, descending pew pew pew pew pew pew song, vaguely recalling the piping song of Wood Warbler.

When begging for food, young Willow Tits give a jzee jzeejzee, but juvenile Marsh Tits do not give such a call (they are strangely silent).

Willow Tit was the last of our resident birds to be recognised (as recently as 1900) and the form occurring here is given subspecific status as kleinschmidti. Similarly, the Marsh Tits that occur here and in western France are also treated as a separate race: dresseri.

There are a few British records of the northern borealis race of Willow Tit, which may occur here as an irruptive vagrant. Such birds are more distinctive in that they are larger, paler and greyer, and thus more obviously different from Marsh Tit. Willow Tit tends to be more irruptive than Marsh and, if you see a Marsh/ Willow Tit at a coastal migration spot, it is probably more likely to be a Willow. Migrating Willow Tits may be located by an unfamiliar high-pitched si si si si or si-sisit flight call.