Among the first birds to start moving in early spring are the larks, and in southern England, Woodlarks are sometimes found mixed in with Skylarks on open terrain on their way back from the near-Continent and lowland fields, before taking up territories in their typical heathland breeding habitat. While good views enable fairly swift differentiation between the two species, it is in flight and distantly on the ground that they can be confused with each other.

Woodlark is a more compact and smaller streaky brown passerine than Skylark, with a notably short tail, a prominent pied arrangement of feathers at the bend of the wing and, crucially, a primary projection of less than half the exposed tertial length. It has a long and broad pair of supercilia that connect at the back of the head in a point on the nape. It has plain rufous cheeks framed in black, and the breast is more clearly marked with a greater extent of black streaks against a buff background.

In flight, its wings are rounder than its congener and its short tail has white tips rather than the white outer tail feathers of the latter. It also has an off-white wing-bar formed by the tips of the lesser coverts which are also black, forming an often obvious patch. An essential difference apparent in even briefly seen or partially silhouetted birds is the absence of Skylark’s white trailing edge to the wing.

Call and song are also diagnostic, and can be delivered from a tall bush or tree in Woodlark and the ground in Skylark, though both often sing in flight, with Skylark classically towering up out of sight over its grassland habitat. Woodlark’s flight call is a pleasantly liquid twoodlee, contrasting with its relative’s harsher and dryer rasp. 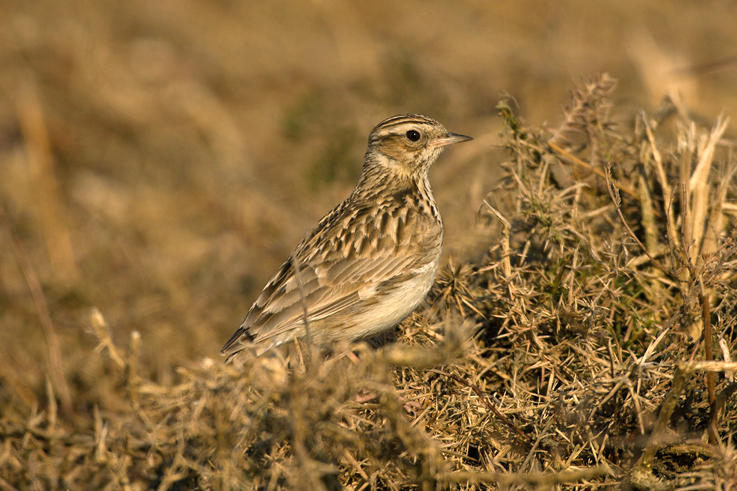 Woodlark (Kelling, Norfolk, April 2006). The prominent supercilium meeting at the nape
and the short rear end are key features apparent on even standing Woodlarks. However, care
must be taken as both of our regular lark species are moving this month and can be seen
together in mixed flocks. Photo by Steve Young (www.birdsonfilm.com).
Content continues after advertisements
Login to leave a comment
Return to List