A common misidentification, particularly in late winter, is that of Sparrowhawk and Merlin. On the face of it, the two species should be easy to tell apart, and under typical conditions they are. However, the males of both species are commonly mistaken for each other when in active hunting flight, and distant females may also cause problems.

Add to this the possibility of migrating or wandering individuals of both species being seen in atypical habitat when dispersing in spring or autumn or during hard weather, and the likelihood of a mistake increases. At such times Sparrowhawk can be seen in almost treeless landscapes and shorelines, while Merlin might be speeding along lowland hedgerows and migrating singly over completely urban settings. Both can ‘thermal’ on warm air convections, though Sparrowhawk is more likely to exhibit this behaviour.

Male Merlin has uniform blue upperparts, with a two-tone upperwing created by darker primaries. The orangey underparts are streaked with black ‘splinters’ from the throat to the bottom of the belly and the ‘trousers’. The orange extends to a thin band around the nape of the neck, and the tail has a quite broad black subterminal band, thinly tipped with white.

Both genders show variations of the generic Falco face pattern, present as a double ‘moustache’ composed of a diffuse malar stripe and another subterminally curved around the rear of the brown-shaded – not white – ear coverts in the female, and a single malar moustache in the male, which also has blue-grey ear coverts. A black eyestripe is also present, along with a thin pale supercilium, not usually visible in flight under field conditions.

Merlin is a ‘mini-Peregrine’, with a brawny chest and pointed wing-tips, and a medium-length tail. It hunts low to the ground, and can even resemble Mistle Thrush in both flight and size, thus sometimes presenting a flight style comparable to that typical of Sparrowhawk.

Male Sparrowhawk has its orange underpart coloration restricted the breast and, crucially, the ear coverts, though this can be hard to see at speed in overcast conditions. It has orange-barred, not streaked, underparts, which can make the lower belly look like male Merlin. Overall, Sparrowhawk wings are broader and more rounded and the tail proportionately longer looking. The tail has an even arrangement of four thick dark bars, rather than a single subterminal one.

Females and immatures of both species can also be easily confused. Female Sparrowhawk is more like a larger version of the male, with browner barring on the underparts, and so is less likely to be misidentified, but immature Sparrowhawk and immature and female Merlin are dark brown birds, often with little detail visible under suboptimal conditions. However, brown Merlins at all ages are slightly brighter looking, with quite heavily barred flight and tail feathers. Whereas a Sparrowhawk shows four black tail bars, which are thinner than the grey areas separating them, Merlin shows five to six dark bars with thinner pale bars in between. Merlin underparts are streaked not barred, and the facial pattern is more prominent than in the male, though still vague.

Male Merlin can also be mistaken for Peregrine when viewed distantly or without objects with which to scale it. However, Peregrine is a much larger, chest-heavy, ‘brutal’-looking bird, with a more monochrome plumage, adults having a white base colour to the black-barred underparts, darker grey upperparts and a broad black moustache in front of a bright white cheek.

Juvenile Peregrines can be similar to Merlin and Sparrowhawk in fast, direct flight, but have obvious buff edges to each major tract of wing coverts, and a proportionately shorter-looking tail than either of the smaller species. The tail also has 10 or more thin alternating bars of black and buff in immature Peregrines, which sometimes have buffy caps, and some individuals can also have a broad buff nape, inviting confusion with Merlin. 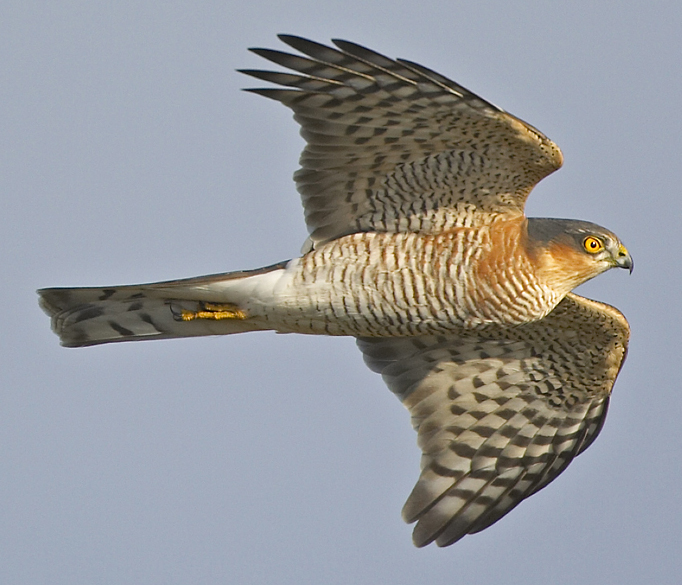 Male Sparrowhawk (Hanko, Finland, 12 October 2005). The orange cheek and upper
breast, continuing onto the belly barring, can lead to confusion with Merlin if seen
poorly. Photo by Markus Varesvuo (www.birdphoto.fi). 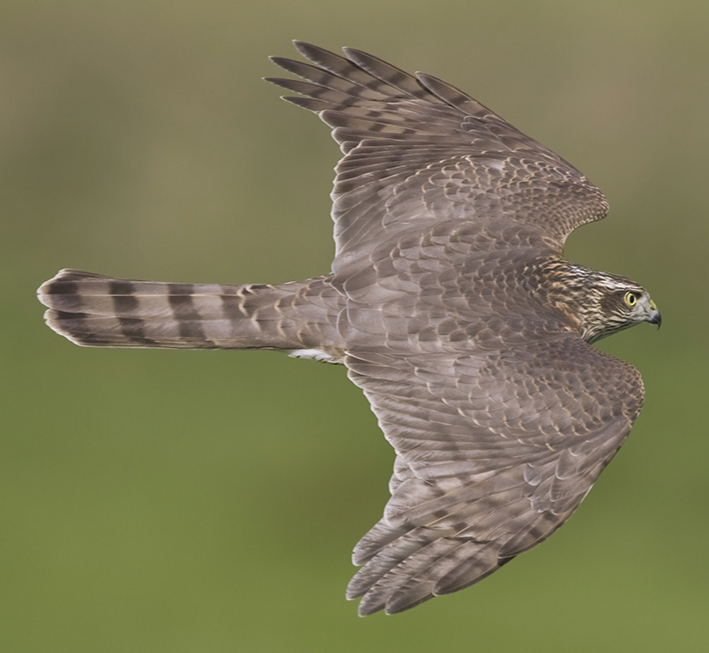 Female Sparrowhawk (Terschelling, The Netherlands, November 2008).
Though broad-winged and bulky, this bird can still be confused with Merlin in
rapid flight. Photo by Arie Ouwerkerk (www.agami.nl).
Content continues after advertisements 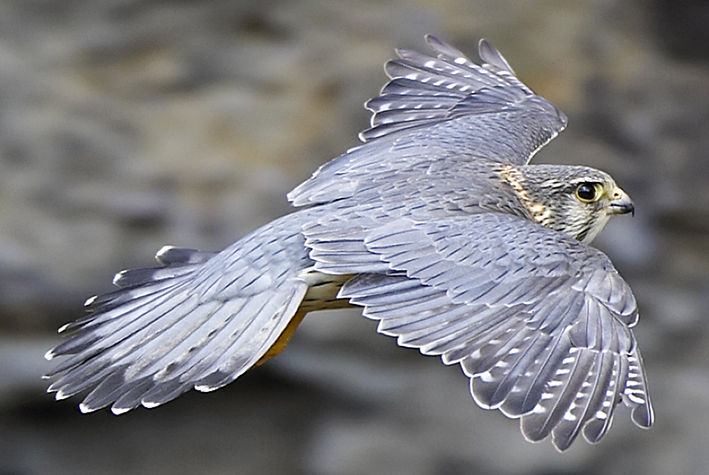 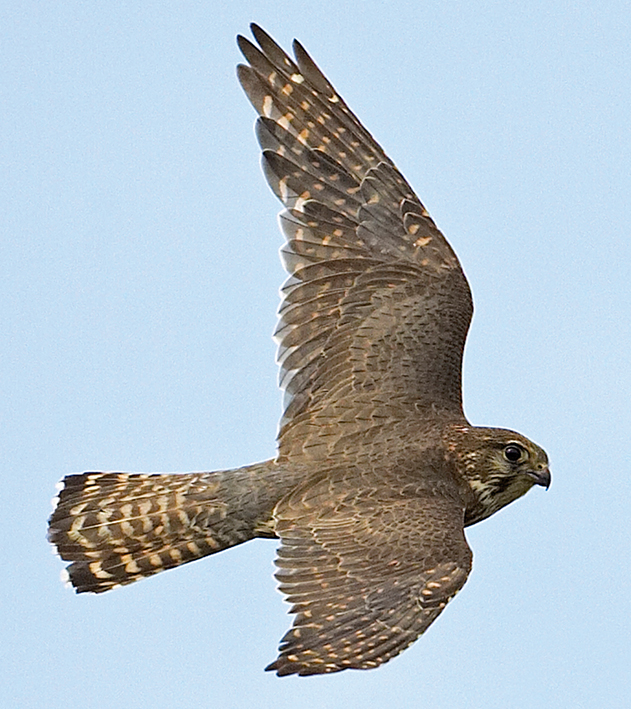