Male birds that have already paired up with a female aren't above looking for a little action on the side, and a new study published in The Auk: Ornithological Advances explores how male Dark-eyed Juncos adjust their courtship behaviour to their social landscape.

Males' courtship behaviour can be affected by factors such as size and hormone levels, but ornithologists are increasingly realising that social context — whether or not the male has a mate, and what other birds are around to witness his exploits — also plays a role. Ohio Wesleyan University's Dustin Reichard and his colleagues explored the roles that these issues play in the courtship of Dark-eyed Juncos. They compared how unpaired males, paired males whose mates were present, and paired males whose mates were elsewhere behaved when presented with a new female.

They found that paired males approached females more rapidly, spent more time close to the females, were more active, and spent more time with their body feathers erect than unpaired males. Paired males also sang fewer long-range songs than their single counterparts, perhaps because they didn't want other birds to overhear, although the actual presence or absence of their mates didn't affect their behaviour.

Reichard had noticed variation in male juncos' antics during previous work to record their courtship songs, which led him to start developing hypotheses about what might underlie those differences. He explained: "Our results highlight the importance of considering both intrinsic and extrinsic factors when investigating the causes of variation in male courtship behaviour. The focus of the field has generally been intrinsic factors, such as male condition or circulating hormone levels, but our results suggest a potential role for eavesdroppers and social context in addition to condition-dependent factors." 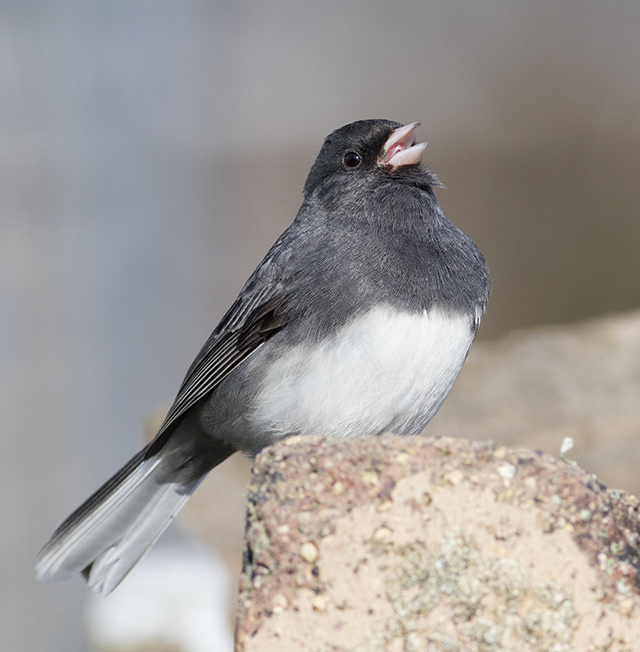 The behaviour of male Dark-eyed Juncos towards extra-partner females was dependent on whether the individual was already paired or not (Photo: Roger Riddington)

Reichard and his colleagues conducted their experiments at Mountain Lake Biological Station in Virginia, placing caged female juncos in front of free-living males and observing the males' reactions. After each trial, the researchers captured the male to record his size and weight and take a blood sample. Reichard added: "Often the male's mate would respond aggressively to the caged female, diving at the cage while pausing occasionally to chase her mate away from the area. The males were usually shameless during this process and continued to approach while singing and displaying, but to our knowledge none of the pairs in our study divorced as a result of this brief infidelity.

"People called me a 'junco homewrecker' during these experiments, but there's little evidence to support that accusation!"

In a future study, Reichard hopes to explore the possibility that males use different strategies to target potential social mates — females that they'll raise young with — and 'extra-pair' mates.

Auburn University's Geoffrey Hill, an expert on mate choice in birds who was not involved in the research, commented: "This study shows the potential for extremely complex behavioral interactions in birds that were long thought to be bland monogamists."