Long-tailed Tit will be an unlikely beneficiary of climate change, according to new research. The 20-year study says warmer spring temperatures will make life a little easier for the birds as they fight to feed their chicks through those critical first few weeks of life. Until now, it was thought that the fate of the tits would be decided in the battle to survive the cold conditions of winter. But PhD student Pippa Gullett and her team at the University of Sheffield say it's spring and autumn weather that holds the key. 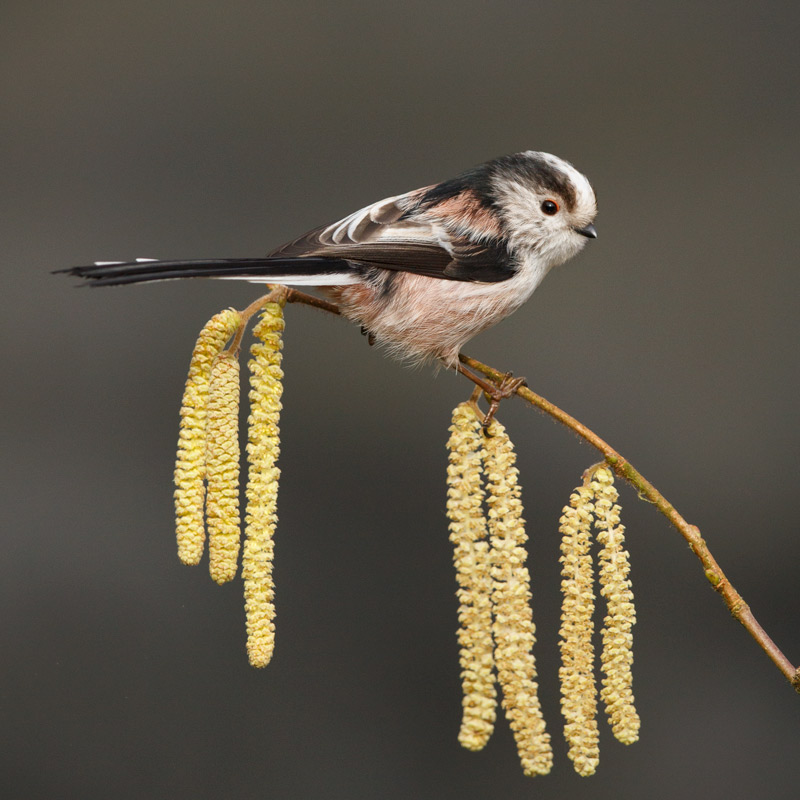 Gullet commented: "During spring, birds work their socks off to raise their chicks. For most small birds that live for only two or three years, not raising any chicks one year is a disaster. They might only get one more chance, so they can't afford to fail. If it's cold and wet in spring, their job becomes much tougher — food is harder to find, and eggs and chicks are at risk of getting cold. By the end of the breeding season, the adult birds are exhausted."

This leaves them vulnerable in the seasons ahead, and birds breeding in cold and wet springs have much less chance of surviving to the following year. But it seems to be autumn, rather than winter, that does the damage. While the colder winters of recent years had no real effect on adult tit survival, chilly and wet autumns were associated with a rise in death rates. Dr Karl Evans explained that this doesn't mean birds never die in winter. However, it seems that in most years autumn weather plays a bigger role, perhaps acting as a filter that weeds out weaker birds before the real winter hits.

The latest climate projections hint at wetter autumns in the coming years, but any rise in Long-tailed Tit mortality as a result is likely to be offset by gains due to the warmer and drier springs. Data from the study — published in Oikos — suggests that, in every plausible climate-change scenario, an increase will be noted in the tits' survival rates. Evans added: "While many species struggle to adjust to climate change, these delightful birds seem likely to be winners."

The full abstract of the study is reproduced below:

Predicting climate change impacts on population size requires detailed understanding of how climate influences key demographic rates, such as survival. This knowledge is frequently unavailable, even in well-studied taxa such as birds. In temperate regions, most research into climatic effects on annual survival in resident passerines has focussed on winter temperature. Few studies have investigated potential precipitation effects and most assume little impact of breeding season weather. We use a 19-year capture-mark-recapture study to provide a rare empirical analysis of how variation in temperature and precipitation throughout the entire year influences adult annual survival in a temperate passerine, the Long-tailed Tit Aegithalos caudatus. We use model averaging to predict longer-term historical survival rates, and future survival until the year 2100. Our model explains 73% of the interannual variation in survival rates. In contrast to current theory, we find a strong precipitation effect and no effect of variation in winter weather on adult annual survival, which is correlated most strongly to breeding season (spring) weather. Warm springs and autumns increase annual survival, but wet springs reduce survival and alter the form of the relationship between spring temperature and annual survival. There is little evidence for density dependence across the observed variation in population size. Using our model to estimate historical survival rates indicates that recent spring warming has led to an upward trend in survival rates, which has probably contributed to the observed long-term increase in the UK Long-tailed Tit population. Future climate change is predicted to further increase survival, under a broad range of carbon emissions scenarios and probabilistic climate change outcomes, even if precipitation increases substantially. We demonstrate the importance of considering weather over the entire annual cycle, and of considering precipitation and temperature in combination, in order to develop robust predictive models of demographic responses to climate change.

Prediction of climate change impacts demands understanding of how climate influences key demographic rates. In our 19-year mark-recapture study of Long-tailed Tits Aegithalos caudatus, weather explained 73% of the inter-annual variation in adult survival; warm springs and autumns increased survival, wet springs reduced survival, but winter weather had little effect. Robust predictions thus require consideration of the entire annual cycle and should not focus solely on temperature. Unexpectedly, survival appeared not to be strongly density-dependent, so we use historical climate data to infer that recent climate change has enhanced survival over the four decades in which the UK Long-tailed Tit population has more than doubled. Furthermore, survival rates in this species are predicted to further increase under a wide range of future climate scenarios.

Article adapted from article by A Peel at Planet Earth Online.