This is the first in a series of monthly summaries detailing the most significant bird finds in the London area. For a definition of the London Recording Area and a more fulsome round-up of what's been seen (common migrants etc) please visit the London Birders Wikipedia website.

The following information was extracted from the national information services as well as London-based birding websites and information kindly provided privately. Of course, this may not be the complete picture so reference to the appropriate London Bird Report (London Natural History Society) on publication is recommended. A proportion of the reports that follow will be adjudicated upon by either the national or county records committees so publication here does not imply an accepted record. It is to be hoped that all records will, in due course, reach the relevant London recorders, a full list of which can be found here. 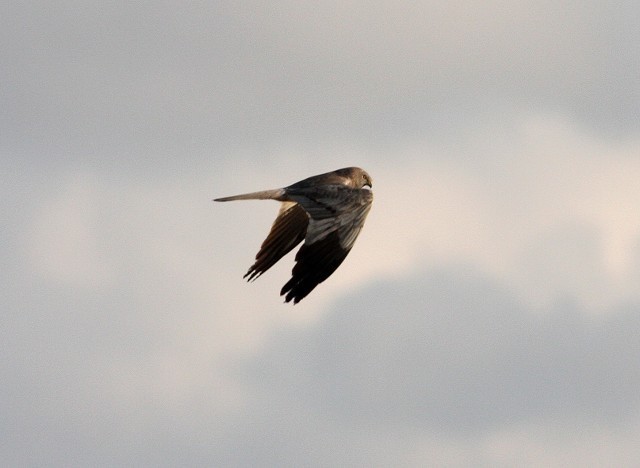 The highlight of the London birding month became a complete no-brainer when news broke of an Eleonora's Falcon that was watched moving fairly high east over Rainham Marshes at 15:10 on the 20th. The bird was seen by nine or ten observers during the five or so minutes it was viewable and would constitute an astonishing first for the London recording area if accepted by the BBRC. Reports were initially confused as to what morph the bird was and whether it was seen passing over a boat laden with birders undertaking a 'Thames pelagic' in the area around the same time. It transpired that the Eleonora's Falcon was a dark bird and the bird seen from the boat was probably a young Hobby, the sightings unrelated.

Hot on its heels came word of a Glossy Ibis that was watched attempting to land at Tyttenhanger GPs mid-morning on the 21st before being driven off by gulls. More's the pity for London listers, for whom this species is a very real blocker with the most recent accepted London record being as long ago as the 1970s. Earlier in the month reports of c.12 'probables' over Colnbrook on 9th and four 'possibles' over Tower Bridge on the 15th had set pulses racing but failed to turn into anything more substantial.

The most outstanding wildfowl report during the month concerned a group of nine Pink-footed Geese photographed flying due north over Chafford Hundred on the 16th. This species is still hard to come by in the London area with only a handful of accepted records between 1996 and 2006. A Leach's Storm-petrel was discovered on the south basin at Staines reservoir on the 30th (probably the recent Stewartby Lake/Wilstone Reservoir bird) but had, typically, moved on by sunrise the following day. The same date produced a good record of a juvenile Gannet south over Walthamstow Reservoirs (one of three species of seabird to enliven London on that date). An immature Shag was at King George V Reservoir late in the afternoon of the 3rd and was still present when looked for on the 4th. Less inclined to linger was a Great White Egret that paid a brief visit to the London Wetland Centre on the 24th before heading off south.

In what was a notable month for London in terms of raptor diversity (14 species reported), Honey Buzzards showed up over five sites (all singles with the exception of the first): Alexandra Park on the 8th (two) and 19th, Stockers Lake on the 16th, Regents Park on the 20th, Selsdon on the 21st and Rainham Marshes on the 24th. Marsh Harriers appeared at a respectable eight sites, most notably three juveniles west over Rainham Marshes on the 9th, and a ring-tail Hen Harrier passed over Rainham Marshes on the 27th. An outstanding four locales reported Montagu's Harriers moving through their airspace (this species isn't even annual in the London area), namely: a female southwest over Regent's Park on the 9th, a juvenile south over South Ockendon on the 11th, one south over the Brent Reservoir on the 13th, and a juvenile over Rainham Marshes on the 20th. Four Goshawks were reported from three sites: a female north and a male east over Rainham Marshes on the 11th and 12th respectively, one west over Wormwood Scrubs on the 18th and another over Enfield on the 24th. An early Rough-legged Buzzard south over Borehamwood on the 13th was fairly unexpected and is another of those species that rides high on London listers' wish-lists. Only two reports of Osprey surfaced during the month, a single very low southwest over Hackney on the 4th and a bird in the Cole Green area, just south of Panshanger, on the 28th. The only Merlin logged was a female watched hunting at Silver Jubilee Park (Brent Reservoir) for a few minutes on the 18th.

Still a quality find in the London area, a Spotted Crake made the London Wetland Centre home from the 13th to the end of the month (and into October) and although occasionally elusive it did show well at times from the Dulverton hide.

On the 30th a dark-phase Arctic Skua was watched moving west over Alexandra Park but this was preceded by its rarer cousin, a dark juvenile Long-tailed Skua, at King George VI Reservoir on the 20th. Unfortunately the latter wasn't a stayer and it hung around for just 15 minutes before heading off high over Staines Town.

Despite being last seen heading up the Thames Estuary the recent, and now legendary, Kentish Tufted Puffin was not to be found on any London waterbody. However, a couple of auk species were duly gleaned by those peering at the Thames, these being a Guillemot at Crossness and Rainham on the 17th (thought to be the same bird) and, better yet, a Puffin on the Thames at Rainham and Dartford on the 23rd (also thought to be the same bird). 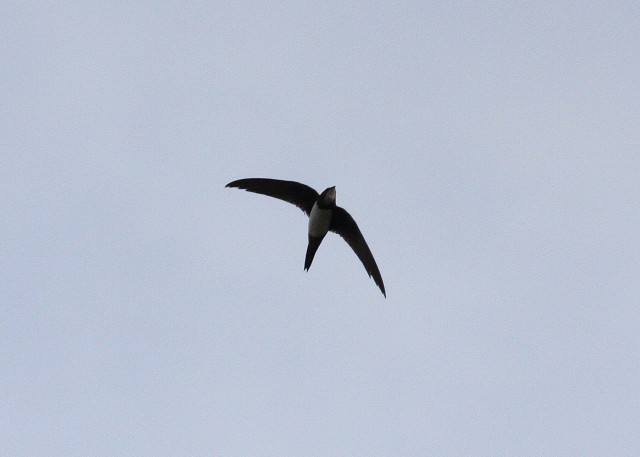 Migrant Nightjars are always a decent London find and this month produced a report of one seen flying around at Broadwater at dusk on the 20th. An Alpine Swift must have delighted its finder(s) at Aldenham Reservoir on the 5th; it certainly lit up a small band of patch-workers when presumably the same bird was relocated over Alexandra Park on the 6th, staying just over five hours. The only report of a Wryneck came from Vicarage Farm (Enfield) on the 15th. One has to wonder how many of these slink through unnoticed.

Migrant Woodlarks put in an overhead showing with two over Regents Park and a single over Grays on the 18th followed by one over Alexandra Park on the 24th. A 'probable' Citrine Wagtail was reported from King George V Reservoir on the 6th but was, unfortunately, never refound despite being looked for later in the day. A similar story concerned a reported Dipper found by non-birders in the Loughton/Debden area on the 16th and seen again on the 24th. It too failed to materialise when searched for by birders subsequently. A Dartford Warbler was at Crossness on the 3rd and was thereafter intermittently seen up to the 7th (and probably the same bird again in early October) while a Yellow-browed Warbler spent the week of the 20th to 27th at the London Wetland Centre. The productive Crossness area also gave up a Bearded Tit on the 28th.

Although sightings of Raven have become more frequent in the southeast in recent years it is still a difficult bird to see in the London area but is, very clearly, becoming easier; Beddington Sewage Farm has produced records of late and this month one flew over there on the 5th followed by singles over Enfield on the 13th, Stoke Newington Reservoirs on the 22nd and Havering-atte-Bower on the 29th.

Apologies for any errors or omissions.