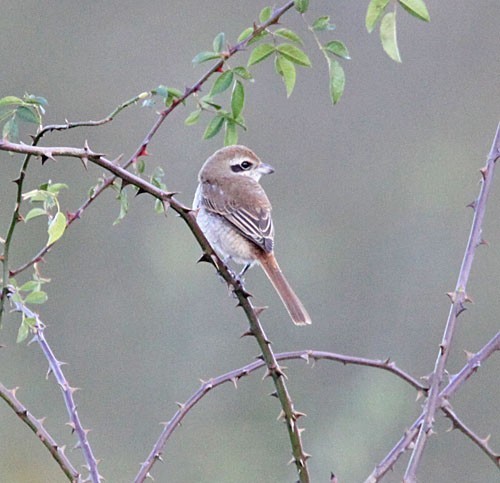 The Brown Shrike at Staines Moor was still in situ on the last day of November, an incredible 51-day residency to date. What is now the most definitive of its kind ever to show up in the British Isles, at least in terms of popularity and length of residence, looks as though it's attempting to bed in for the winter. All being well it will go on to form part of London's avian cast in 2010 when year-listers will no doubt be back at the Moor to pay homage.

(Dark-bellied) Brent Geese featured at five sites during the month and included seven over Horsendon Hill on the 8th. November always used to be the most reliable month of the year to see this species in London, but the numbers these days are usually fairly low when they do occur. Horsendon Hill would've lost out to Paddington Green in terms of number had at least fifteen 'possibles' flying east on the same date been certainly identified. Due to their distance this wasn't an option.

A Ruddy Shelduck at Tyttenhanger GPs on the 16th certainly merits a mention but, as is regularly the case with this striking species, its credentials as a wild bird were something short of certain. A burgeoning tally of 158 Mandarin Duck were counted at Grovelands Park on the 19th but the observer involved estimated there to be at least 200 of these gorgeous exotics on site.

Four well-watched locations gratefully acquired Scaup during November including four at Hyde Park (rising from one the previous day) on the 11th, a solid Inner London record. A couple of other patchworkers were endlessly frustrated by turning up Scaup-type hybrids for their troubles and another Aythya, at Stoke Newington Reservoirs between the 24th and 26th (at least), was considered to contain at least some Ring-necked Duck blood.

The 11th also saw a female Common Scoter at Amwell GPs, the only site that reported this fairly regular London species during the month. The relatively mild November temperatures held down the numbers of sawbills animating London waters and Smew were conspicuous by their absence. Red-breasted Merganser is usually the scarcest but birds were reported from three sites this month including two at King George V Reservoir on both the 14th and 15th. Goosander weren't around in any significant numbers either and just four sites landed birds, the best being seven at King George V Reservoir on the 15th.

Red Kites were also scarce and registered only over Haringey on the 4th and Woodoaks Farm on the 6th, but at least raptor devotees could be entertained by a male Marsh Harrier at Rainham Marshes on several dates between the 4th and 29th and Beddington SF on the 8th. Rainham Marshes, an intensely watched site, produced the only Hen Harrier reports with different ring-tails on the 4th and the 15th. A well-seen Osprey moving due south over Hyde Park on the 5th was a surprise Inner London find so late in the year though November records in London are certainly not unprecedented. However it wasn't the last of 2009, with the Sarratt/Chenies bird (Herts/Bucks) seen flying toward Chorleywood (within the London recording area) on the 10th and 11th, and toward Rickmansworth on the 21st. Four fairly widespread locations were lucky enough to bag Merlins with Rainham Marshes coming out on top by scoring single birds on three dates.

The very strong overnight southwesterlies on the 24th/25th managed to deposit a Leach's Storm-petrel on the south basin of Staines Reservoir. Unfortunately, for most, any plans of going to watch the waif were curtailed by the news that it wasn't seen after 07:45 on the 25th, its eventual fate unknown. Another, but harder-to-watch, bird was found at the William Girling Reservoir on the 26th, no doubt also present on account of the prevailing weather conditions.

Great Northern Divers were at a good six sites, mostly in the west of the recording area, with probably four or five birds involved

Following on from last month's Red-necked Grebe at Staines Reservoir, November afforded reports on five dates, between 8th and 21st, at Queen Mother Reservoir. Wraysbury GPs was furnished with two Slavonian Grebes on the 7th, with one remaining to the 9th, and Black-necked Grebes were at four locales, the best count being twelve at William Girling Reservoir on the 26th. 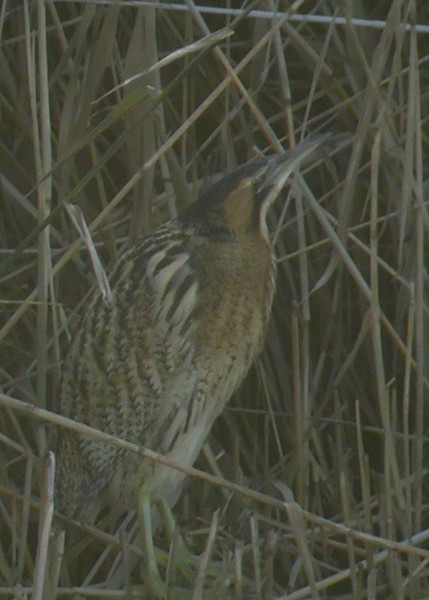 Three sites reported Bitterns with three at the Ingrebourne Valley on the 2nd being the most noteworthy. The only Shag was an immature bird on the Thames at Bromley-by-Bow on the 27th. 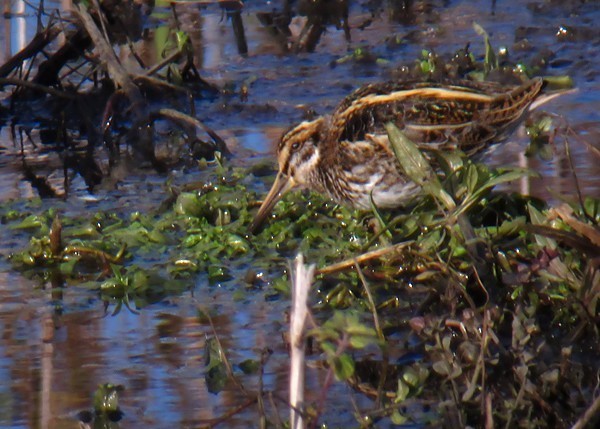 The best of the waders this month were a Little Stint at Rainham Marshes on the 2nd, Jack Snipe at five sites, most notably up to five at the London Wetland Centre, and Woodcocks at eight. Unusually for the latter in London during November none were found dead, sitting on pavements, or cowering under bus shelters! Two Spotted Redshank were reported from Grays on the 11th.

Mediterranean Gulls weren't too hard to come by with about fourteen sites turning up this splendid Larid including a respectable three separate birds at Hyde Park and Kensington Gardens in Inner London. This species is no longer the relative rarity it once was in Inner London. A minimum of eleven Caspian Gulls were claimed and a possible Azorean Yellow-legged Gull was seen moving downriver at Rainham Marshes on the 27th; unfortunately the views that were had proved to be inconclusive.

The only Short-eared Owls were over Beddington SF on the 5th, Rainham Marshes on three dates and Hyde Park on the 25th (the first at this site since April 1974).

Woodpigeon movement was pretty prominent at the beginning of the month, not exactly mirroring some of the outstanding counts elsewhere in the home counties but nevertheless obvious. A tally of 9,660 birds over Horsendon Hill on the 5th was the best site count for any one date.

Wormwood Scrubs was the place to connect with a London Woodlark during November, with a single showing well there on both then 13th and 15th. Water Pipits were, of course, much more widespread and were seen at nine venues with Beddington SF notching up four on the 29th. Black Redstarts turned up at five sites, as did Ring Ouzels. 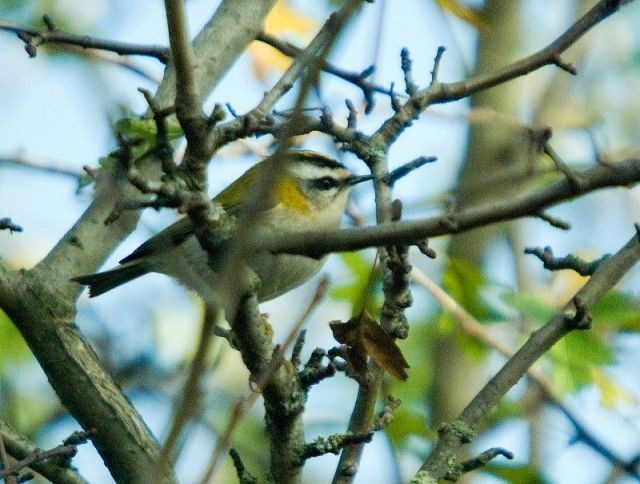 Cetti's Warblers continued to be widely reported, with seven spots holding birds, most obviously Rainham Marshes which held an eyebrow-raising fourteen on the 12th. A Dartford Warbler was seen intermittently at Wanstead Flats to the 6th and Rainham Marshes held a further bird on the 29th, while Yellow-browed Warblers were noted from Wraysbury GPs on the 7th and Limpsfield Chart on the 8th. In what was an excellent month for sightings, Firecrests added a vivid splash of colour to no fewer than fifteen sites. Most were singles but Trent Park hosted four on the 2nd and Tower Hamlets Cemetery was prominent for its well-reported two, which appear intent on wintering. A bird was also trapped and ringed at Hillfield Park Reservoir on the 8th.

The only Bearded Tits were two at Rainham Marshes on the 2nd and 8th, probably the capital's most likely setting for an encounter. A Raven over Cassiobury Park on the 12th was perhaps unsurprising given that a pair bred nearby this year and another was at Bedford's Park on the 22nd. The former site is likely to be one that features on London listers' itineraries in the not too distant. 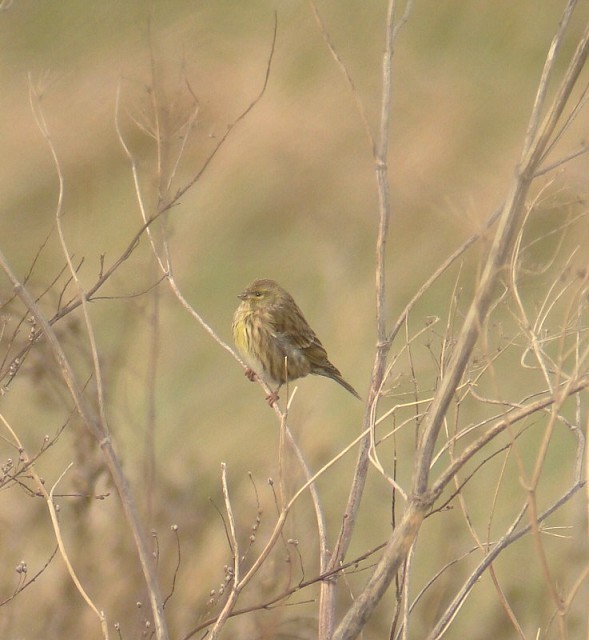 Rainham Marshes was (as it was during autumn/winter 2008) the epicentre of Serin occupation. Up to two birds entertained intermittently, often showing well, between the 15th and the end of the month. Strikingly noteworthy that this record is, it certainly doesn't compete with the superb seven that drew so much attention there last year. With the site working up a good hit rate for these super little finches, and with climatic amelioration, could it be that a bird will end up wintering here one year!

The only Mealy Redpoll reports during the month came from the London Wetland Centre, which housed up to two on three dates. A Twite was at Rainham Marshes on the 11th and presumably the same bird, at the same site, was heard calling from within an overhead finch flock on the 16th and 17th. London Hawfinches are never exactly an effortless find but Fairlop Waters produced the desired result with a report of two there on the 6th.

A well-photographed Snow Bunting on the Rainham Marshes foreshore on the 9th and two Lapland Buntings at the same site on the 16th constituted good finds but unfortunately two further Lapland Bunting sightings weren't firm enough for the observers to be fully happy: a possible, but silent, bird over Clissold Park on the 4th and a probable, which did call, at Rainham Marshes on the 12th.

Many thanks to Nick Tanner and Howard Vaughan for kindly supplying requested details for various reports. Apologies for any errors or omissions.