This is the latest in a series of monthly summaries detailing the most significant bird finds in the London area. For a definition of the London Recording Area and a more complete round-up of what's been seen recently, visit the London Birders Wiki at www.editthis.info/londonbirders/LatestNews/. 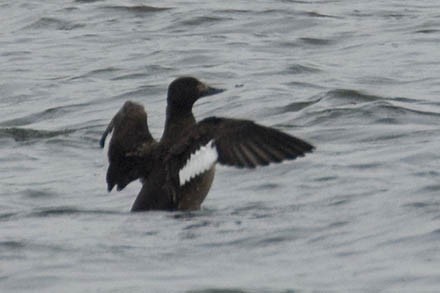 March was an interesting month for London: no county firsts but a good showing of scarcities and plenty of migrant interest kept most observers vigilant. The 'duck of the month' accolade went to the Velvet Scoter at William Girling Reservoir between the 9th and 15th and what was considered to be the same bird was at King George V Reservoir on the 23rd. Great White Egrets were at Rainham Marshes mid-morning on the 13th (when it flew purposefully east) and low over Neasden rooftops near Gladstone Park at 07:40hrs on the 15th; a recent report of a bird over Feltham turned out to be erroneous and was in fact an albino Grey Heron (probably as rare as the real thing!). Crossness scored handsomely on the 21st when a Spoonbill was watched heading down the Thames at 17:20hrs and two probable Common Cranes were seen heading northwest over William Girling Reservoir at 07:15hrs on the 10th; alas, they eluded a firm and conclusive identification. A Stone Curlew at Crossness on the 30th was a superb find for the site's dedicated band of watchers; it was present to 09:30hrs when it flew toward the nearby Southern Marsh but wasn't, unfortunately, refound. An Alpine Swift at Leyton Flats intermittently on the 22nd was a great find and one has to wonder whether a bird over Crossness for nearly three hours on the 27th was the same bird or another associated with the national influx. Last month's Waxwing at Finchley remained in residence up to the 18th and attracted a multitude of admirers during its stay but this was massively eclipsed by 20 flying east over the London Wetland Centre on the 14th and 30 west over Crossness on the 21st. The star passerine of the month was a Penduline Tit at Rainham Marshes mid-afternoon on the 13th. It was present in reedmace between the visitor centre and woodland for ten minutes. The following day (14th) what was probably the same bird was heard as it flew over the car park during the evening then on the 15th it, or another, was reported early morning behind The Albion just south of Ingrebourne Valley, but not subsequently. 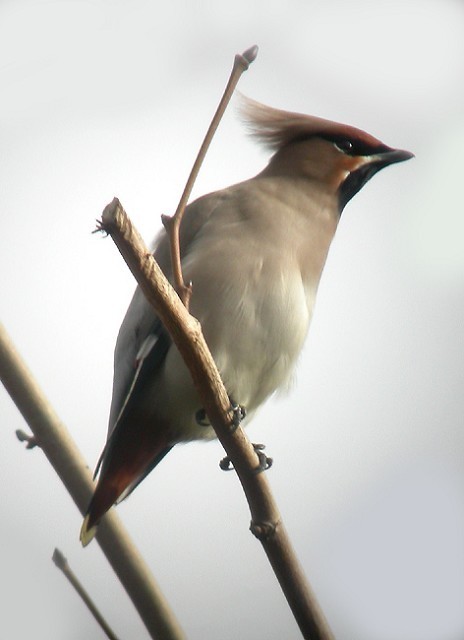 The only 'wild swans' reported during March were two Bewick's Swans at Rainham Marshes on the 7th but 'wild geese' provided lots of fun and Belhus Woods CP gave quite a few local birders (and a few London listers) with their first opportunity to connect with Pink-footed Geese locally; two birds were present between the 7th and 15th. The Ingrebourne Valley continued to host up to three White-fronted Geese from the 2nd to 21st at least and what were probably the same three were seen flying upriver at Rainham Marshes on the 10th. Brent Geese were at four sites during the month and included 15 at King George V Reservoir on the 18th. A Barnacle Goose of unknown provenance was at the Ingrebourne Valley on the 25th. Also of rather dubious origin was the Ruddy Shelduck at Tyttenhanger GPs between the 6th and 30th at least.

Garganey always herald spring in a dapper fashion and this month provided sightings from five sites: singles at two sites and two birds each at Amwell GPs (4th), Alexandra Park (southwest on the 19th) and the London Wetland Centre (29th). Scaup were at a respectable five sites and included up to four at Staines Reservoirs and up to two in the Thamesmead area. Smew gave a frisson of excitement to 11 sites with the best count being of six at Friday Lake in the Lee Valley on the 3rd, while Red-breasted Mergansers put in a showing at five locations (though with some duplication as birds moved about). Goosander on the other hand graced 13 sites with nine at both Weald CP and Holyfield Lake on the 3rd and 4th respectively being the highest scoring. 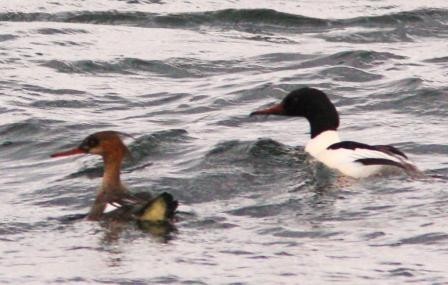 Great Northern Divers entered observers' notebooks at five venues and included a very impressive five at King George VI Reservoir on the 6th. Slavonian Grebes are never easily encountered but March proved to be a productive month for this lovely species with five well-watched sites producing the goods. All were singletons apart from two at King George VI Reservoir on the 6th and two at Staines Reservoirs on the 19th. Black-necked Grebes were at fewer sites (three) but were certainly around in better numbers, 20+ at William Girling Reservoir being the most noteworthy. 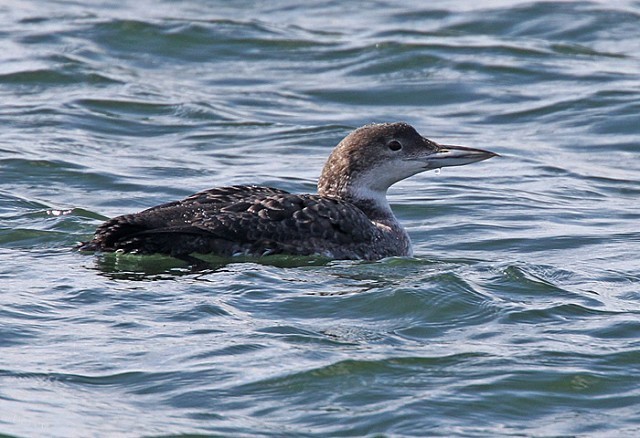 The only Shag of the month, an immature bird, was at William Girling Reservoir on the 9th. 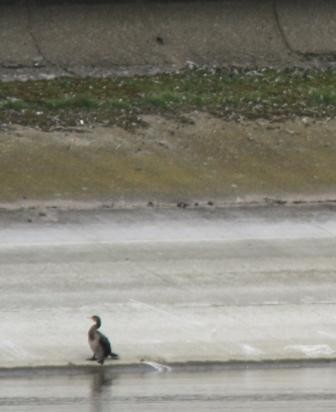 Bitterns were at, or over, five sites with up to two at the London Wetland Centre to the 15th at least being the most significant.

Red Kites were over an enormous 43 sites, a sure sign that spring was on the cards, while Marsh Harriers were seen at four including at least two at Rainham Marshes between the 6th and 31st. A male Goshawk was claimed from Fairlop Gravel Works on the 20th and a probable (also a male) was at Walthamstow Reservoirs on the 24th. Ospreys are never without admirers and observers at four locales were lucky enough to connect in March (a further possible was also seen but not conclusively identified); all were singles except for two over Amwell GPs on the 20th. Perhaps surprisingly, the only Merlin of the month was at Hainault Farm, Fairlop, on the 11th (a male). A very early Hobby (at least in London terms) was claimed over Regent's Park on the 24th. 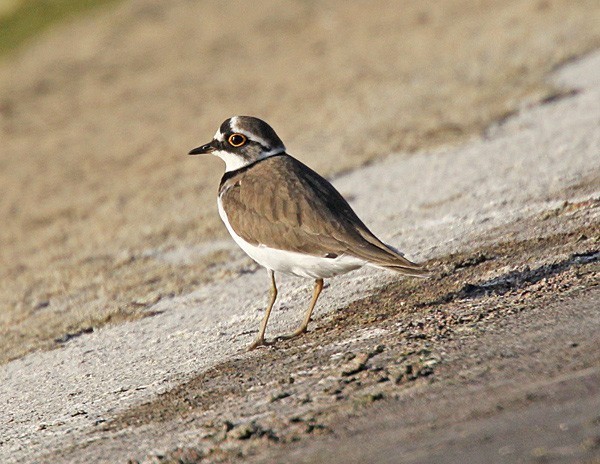 Mediterranean Gulls were at a rather meagre six sites but included the popular and highly approachable first-winter at St. James' Park up to the 10th at least. The sole Little Gull sighting of the month consisted of three birds that flew west at Staines Reservoirs on the 24th. At least eight Caspian Gulls were noted from three regular sites for this species, Beddington SF, Rainham Marshes and the London Wetland Centre, while Glaucous Gulls were at five spots with Beddington SF and Rainham Marshes being the most likely places for an encounter.

An early Common Tern cheered the Crossness patchworkers on the 28th and it, or another, was seen there on the 31st.

A Long-eared Owl (an irregularly reported species for obvious reasons) at Rainham Marshes on three dates between the 16th and 19th was a surprise. Its more regularly found cousin, Short-eared Owl, was at three locales, up to two at Rainham Marshes to the 28th at least being the best. Although not a species that would normally be covered in this summary a pair of Tawny Owls with four owlets at Kensington Gardens in Inner London have been visited by upward of 350 birders, photographers, and members of the public, possibly the most twitched birds in London this month! 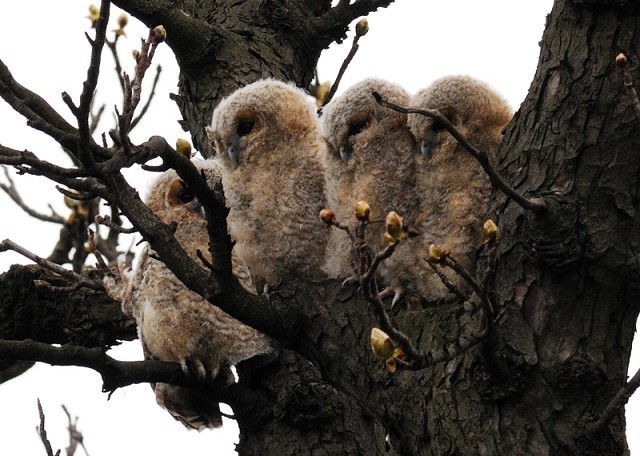 Some very early Common Swifts were reported: Wimbledon Common on the 20th, South Norwood Country Park on the 26th and the London Wetland Centre on the 29th while an unidentified swift sp. over Fairlop Waters CP on the 26th got a few people wondering as to its specific identification; London eagerly awaits its first Pallid.

Hirundines were easily come by in March with Sand Martins at 27 locales (the first being at William Girling Reservoir on the 9th and the best count being of 58 at King George V Reservoir on the 28th), Swallows at 29 (the first on the 20th at Amwell GPs) and a House Martin at the London Wetland Centre on the 30th. Water Pipits were found at five regularly birded locations with the best tally being of eight at Rainham Marshes on the 20th. Yellow Wagtails went over the London Wetland Centre on the 28th (two) and one was at Willows Farm Puddle on the 30th. Single White Wagtails were welcomed in at seven locations from the 12th (all singles) and the first Ring Ouzel of the decade for the London area, a male, turned up at Minet CP on the 15th; it was followed by another, more elusive, bird at Rainham Marshes on the 27th and 28th.

Black Redstarts (mainly migrants) were notched up at eight sites and included two at Cannon's Farm and Banstead Woods on the 28th and 30th at least but last year's 1st March Northern Wheatear at East India Dock Basin (the earliest ever for London) wasn't equalled this spring; 32 sites picked up birds with Minet CP bagging the first on the 15th and the best subsequent counts being of eight each at Beddington SF and Rainham Marshes on the 21st and 22nd respectively. Cetti's Warblers continued to be widely reported (11 sites) and the Ingrebourne Valley held a mightily impressive 34 birds on the 28th. Spring warblers were actively sought out and found and (Blackcap and Chiffchaff aside, which were widely reported); the first Sedge Warbler of the year was a single at Rainham Marshes on the 27th while Willow Warblers sang at 27 sites. Firecrests were found at 16 venues, mainly singles but with two at five sites and up to three birds at two. 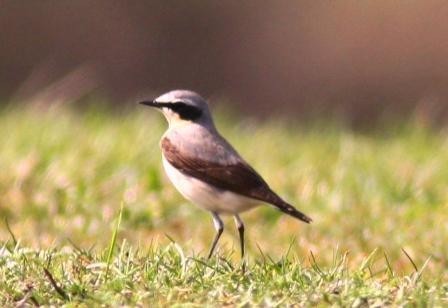 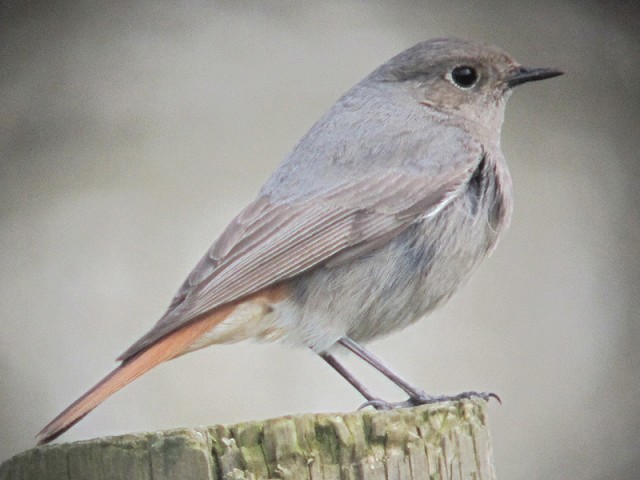 There was a good showing of Raven during March with singles at or over six locales including an excellent record of one flying southwest over Alexandra Palace on the 18th (a relatively central location). Mealy Redpolls were reported from the London Wetland Centre (one on the 4th), Trent Park (two on the 6th including a singing bird), Belhus Woods CP (up to four to the 14th) and Thorndon CP (four on the 16th). Common Crossbills were at four sites with the most notable count being of five northwest over Trent CP on the 1st. The only report of Snow Bunting was a single moving northeast over Leyton on the 7th.