This is the fifth in a series of monthly summaries detailing the most significant bird finds in the London area. For a definition of the London Recording Area and a more complete round-up of what's been seen recently, visit the London Birders website.

Some of the reports that follow will be adjudicated by either the national or county records committee, so publication here in no way implies an accepted record. Please submit all records to the relevant recorders, a full list of whom can be found here. 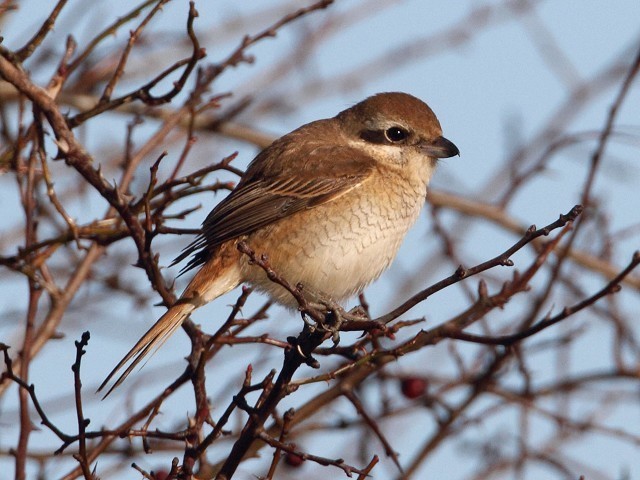 The Staines Moor Brown Shrike maintained its star status for January when, amazingly, it was rediscovered on the 1st following a two-week gap in reports. Whether the bird left the site and returned or was in fact present all along isn't known, but any hopes that it would continue to winter were dashed before long and it was last reported on the 2nd having notched up an incredible 84 days between the first and final sightings. This bird is bound to be remembered fondly by its many admirers for years to come, but will it become a never-to-be-seen-again blocker in the London area or could it be that this charismatic vagrant will, one day, show up again? 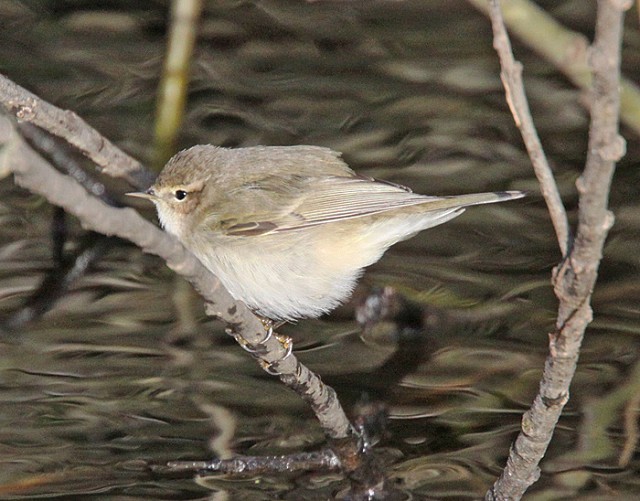 A putative Siberian Chiffchaff was present at Broadwater Lake between the 9th and 19th at least but though beautifully photographed the bird was never heard to call. Up to two Serins remained at Rainham Marshes to the end of the month and provided intermittent views through the worst of the winter weather. 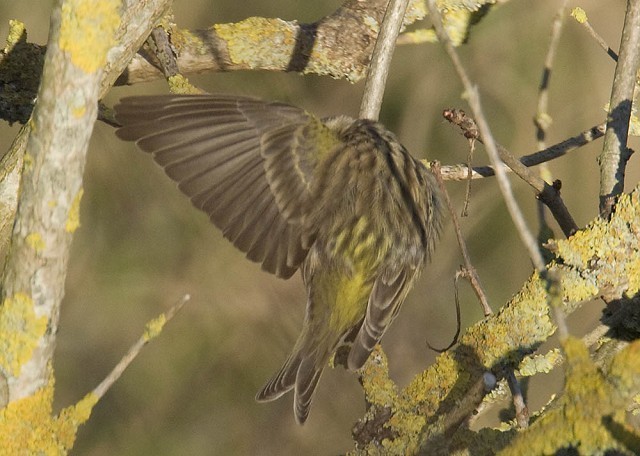 January was a notable month for wildfowl in London, particularly in the east of the recording area. A group of five wild swans was seen heading south down the Lee Valley on the 23rd, then some 15 minutes later five Whooper Swans were discovered on the Thames at Crossness. The same five then visited Rainham Marshes where it was ascertained that one bird was colour-ringed. All were still present on the 24th but flew off northeast early in the morning. Six Bewick's Swans flew north over Waltham Abbey on the 9th and what were undoubtedly the same six were seen at King George V Reservoir on the same day.

Tundra Bean Geese are London rarities, so two that toured Rainham Marshes and Crossness with a skein of Pink-footed Geese on the 21st were enormously welcome. They eventually settled at Rainham Marshes and remained until the end of the month, but on the 30th three were present. The Pink-footed Geese they travelled with numbered an impressive 71 birds (also on the 21st but not seen subsequently), the best London count of this species in recent decades. Brent Geese put in a showing at 13 sites, with the main cluster of records around the 21st. Most sightings referred to fewer than ten birds, with the best being 27 that flew northeast over Queen Elizabeth II Reservoir on the 19th. Queen Elizabeth II Reservoir also accommodated c.50 unringed Barnacle Geese on the 4th when they flew in to roost at dusk. The following morning they were seen heading off north at dawn then all 50 were back to roost again on the 8th. On the 9th the same flock flew in from the southeast in the late afternoon but carried on north then east; they were last seen circling distantly to the north of the reservoir at dusk on the 28th.

Connaught Water in Epping Forest held an impressive 85 Mandarin Ducks on the 9th and 68 Red-crested Pochards were at Regent's Park on the 30th. A probable female Ferruginous Duck was reported from Wraysbury GPs on the 1st and as a definite first-winter female on the 7th, 8th and 12th. Scaup were reported from nine sites with the best count being of six past East India Dock Basin on the 10th; what were probably the same six were seen 55 minutes earlier from Battersea Power Station but were only poorly photographed in flight and not identified at the time. Aythya hybrids continued to entertain or frustrate, and the apparent Ring-necked Duck × Tufted Duck remained at Stoke Newington Reservoirs up to the 19th at least while a Lesser-Scaup-type male was at Amwell GPs to the 3rd at least. Two sites reported Common Scoter: a single on the Thames at Rainham Marshes on the 10th and three on the Thames at Belvedere on the 25th. The incredibly cold weather bolstered Smew reports with some 24 locations gaining birds, most significantly 11 at Bedfont Lakes CP on the 3rd which included four white nuns. Red-breasted Merganser were at four sites, the best being three on the Thames at Rainham Marshes on the 10th, while Goosander were at a 30 locations, 25 at Weald Park on the 23rd being the most noteworthy. 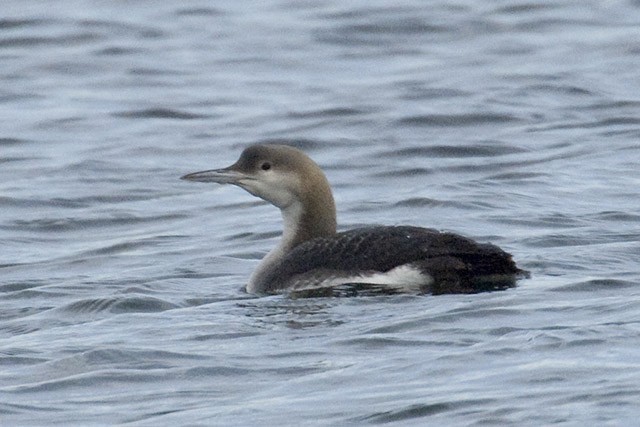 Perhaps surprisingly, no Red-throated Divers were reported during January but a Black-throated Diver made William Girling Reservoir home between the 17th and the end of the month and also visited the nearby King George V Reservoir on a couple of dates. Great Northern Divers were at three locales including a highly impressive six at King George VI Reservoir between the 1st and 23rd at least. However, two at William Girling Reservoir from the 4th to 26th were very popular. 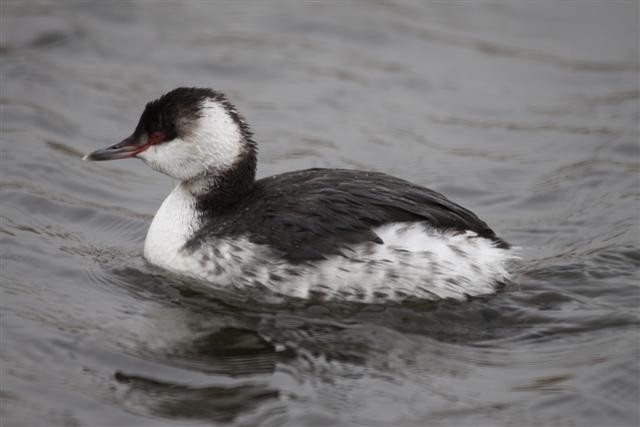 The only Slavonian Grebe of January frequented a ditch at Rainham Marshes between the 24th and the end of the month. Black-necked Grebes were much more widespread with birds noted from five sites and an excellent 26 at William Girling Reservoir on the 19th.

Only one Shag made the cut, a single at Holmethorpe Sand Pits on the 1st. 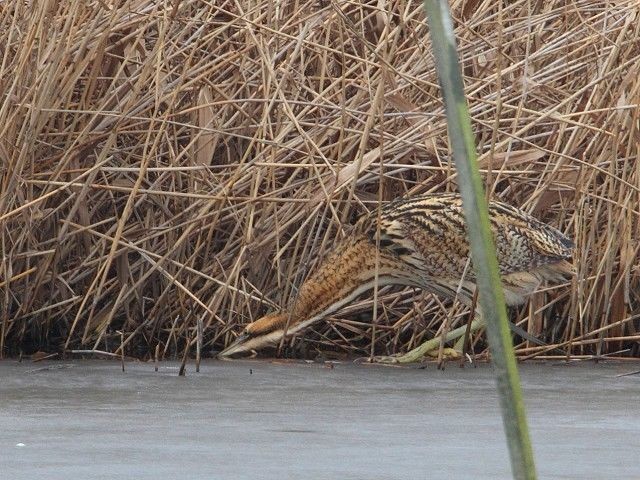 Thanks to the weather one of the biggest features of the month was the incredible number of Bitterns reported from across the London recording area. No fewer than 19 sites hosted this species, with up to six at the London Wetland Centre (which also held a booming bird) and up to four at a couple of other sites (though most recorded singles or doubles). A couple of interesting sightings were of birds perched in full view in trees at Stoke Newington Reservoirs on the 7th and Esher on the 12th; due to the severe cold supplementary feeding was encouraged at Amwell GPs.

Single Red Kites were over ten sites, a comparatively good showing with regard to recent months when they've been rather scarce. Rainham Marshes hosted up to two female Marsh Harriers to the 24th at least and birds from here could conceivably be related to sightings of singles at the Ingrebourne Valley on the 3rd and Crossness on the 19th; a further single was over Cheam on the 14th. What may well have been the same male Hen Harrier was over the Ingrebourne Valley on the 3rd and Crossness on three dates between the 19th and 23rd. A Goshawk watched pursuing a Peregrine Falcon over the lagoons at Rye Meads at 10:30hrs on 30th was an excellent county find. Single Merlins were logged on four dates in the Rainham Marshes, Aveley and Ingrebourne Valley area between the 6th and 16th, with a further bird at Claybury Park on the 6th.

Despite the Arctic conditions a possible white-morph Gyrfalcon in a quarry at Greenhithe on the 1st appeared to inspire little enthusiasm, no doubt a consequence of the possibility of it being an escaped falconer's bird.

Jack Snipe put in a good showing with 13 spots reporting birds. Most were singletons but Beddington SF held an outstanding 12 on the 9th. The story was a little different for their more robust, and more crepuscular, cousin: Woodcocks were found at a staggering 60 widely dispersed locations, the best being five at Weald Park on the 7th and two flushed in the garden at Buckingham Palace being the most high profile. However, they still remained elusive quarry for some birders.

Twelve sites were graced by Mediterranean Gulls during the course of January, including two birds at three locales in Inner London, while Caspian Gulls seemed to have invaded the capital! Beddington SF held at least six during the month while Rainham Marshes recorded birds on 17 dates, most notably eight on the 5th and six on the 22nd (with apparently some considerable turnover of birds and possibly as many as 20 different individuals!); three other sites also held singles. The only Iceland Gull of the month was an adult at Rainham Marshes on the 22nd and 26th but the same well-watched area held up to four Glaucous Gulls with further singles at Crayford on 24th and 25th (probably from Rainham) and Amwell GPs on the 31st. An apparent juvenile Glaucous Gull × Herring Gull was at Rainham Marshes on the 22nd. The only Kittiwake for January was a first-winter found dead at Tyttenhanger on the 16th. 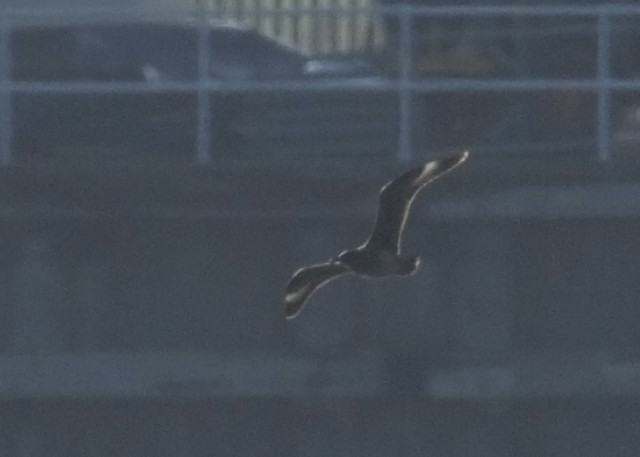 On the 1st a Great Skua put in an appearance on the Thames at both Crayford Marsh and Aveley Bay but didn't linger beyond that date.

Long-eared Owls are never easily found, so one reported from South Weald on the 8th was noteworthy. Certainly easier to come by (for the most part) are Short-eared Owls, and three sites held this attractive bird: up to four at Rainham Marshes to the 24th at least, Beddington SF on the 9th and Gunpowder Park on the 11th. 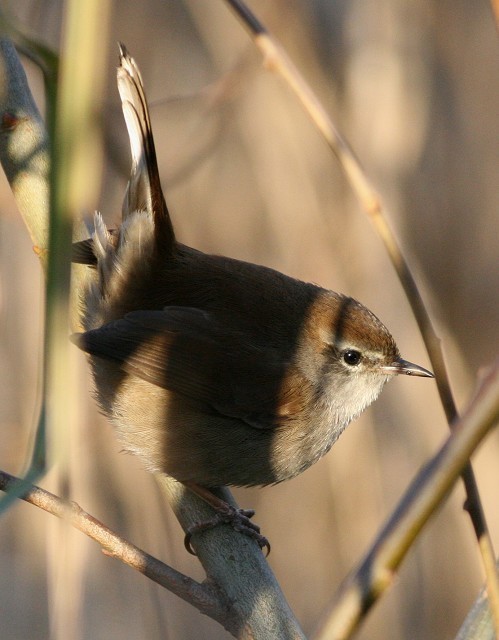 Two Woodlarks flew south over Rainham Marshes on the 17th and Water Pipits were at five sites, seven at Staines Moor on the 2nd being the best. Black Redstarts were seemingly scarce and singles were at three local patches. Eleven locales held Cetti's Warblers and Rainham Marshes had seven birds on both the 3rd and 20th. Firecrests continued to be widely reported and 24 sites held this gem of a kinglet. The best count came from Bedford's Park, which held three birds up to the 25th at least, though a further five sites held up to two. The only Bearded Tit reports came from Rainham Marshes where up to two were reported to the 12th, and two Continental Coal Tits were claimed from the London Wetland Centre on the 10th. The same site also hosted up to six Mealy Redpolls during January (though they could prove frustratingly elusive for a few visiting birders), and Brunel University Bicentenary Gardens also hosted at least two birds on three dates. Two Common Crossbills passed over Wanstead Flats on the 1st, but Black Park was the place to be to connect with this species: six were seen there on the 3rd and a minimum of 23 were present on the 26th. The only Hawfinches were two at Regent's Park on the 7th, an Inner London locale that seems to record this species near annually. Two Lapland Buntings put in an appearance, one heard flying into Aveley Bay on the morning of the 5th and an excellently photographed single at Beddington SF from the 13th to 17th. 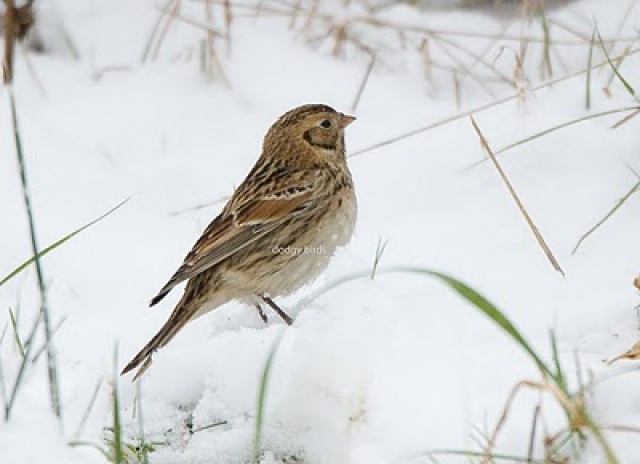 Many thanks to Johnny Allan and Howard Vaughan for kindly supplying requested detail. Apologies for any errors or omissions.