April turned out to be an interesting month across the London recording area with the arrival of many regular migrants and with interest levels buoyant thanks to a sprinkling of rarer species. A female Ferruginous Duck at Holmethorpe SPs on the 4th unfortunately didn't linger but did inspire a bit of detective work regarding its origins. An unidentified stork that flew high to the northwest over Barnet on the afternoon of the 11th eluded a conclusive identification and arguably the best bird of the month, a Glossy Ibis, was watched passing high over Hainault Farm on the 22nd. A further intriguing unidentified bird was a probable vulture southwest over Walthamstow Reservoirs at 12:40 on the 9th. It was later picked up over central London but, due to the bird's height and the fact that the observer was watching from Hampstead, it remained unnamed. A Black Kite passed northeast over Chingford mid-afternoon on the 10th but never really became available for those keen to add its name to their London lists. Three Common Cranes circled over Fisher's Green at 14:35 on the 12th before heading north. They were next seen passing over Galley Hill Wood in the Lee Valley some ten minutes later and later in the day passing over the A12 near Chelmsford. Earlier in the day, at about 08:30, what were probably the same three flew NNE over the A120 about halfway between the Frating roundabout and The Severals exit (Essex); they appeared to be dropping during that observation and may well have landed in nearby fields before continuing their journey.

A Stone Curlew flushed from a heather patch on Wimbledon Common on the 2nd was a superb find but a wonderfully photogenic Black-winged Stilt at Rainham Marshes on the 8th stole the show in terms of waders. It was a popular attraction for those London listers that required it, despite it being present for one day only (as has been the case with the majority of previous London-area records). Three sites received Alpine Swifts: a bird present for 60 seconds over Stoke Newington Reservoirs on the 1st; one at Warren Gorge at Chafford Hundred between the 3rd and 5th; and birds at Rainham Marshes for five minutes on the 5th (the Chafford Hundred bird) and at 13:00 on the 18th. Three Hoopoes were located: at Rainham Marshes on the 4th, King George V Reservoir on the 19th, and the London Wetland Centre on the 21st (the latter was also seen at Barnes Common later in the day). Four notable passerines enlivened the month no end for their respective observers. A Red-rumped Swallow flew north over Wraysbury GPs on the 18th and a putative Spanish Wagtail was at King George V Reservoir on the 20th; though it was well photographed a Channel Wagtail or other intergrade couldn't be eliminated from the equation. A Hooded Crow (a bona fide London rarity these days) was seen landing in a tree at Leyton on the 8th but wasn't refound when looked for subsequently. Rainham Marshes provided a Serin on the 18th when one flew west at 16:00. 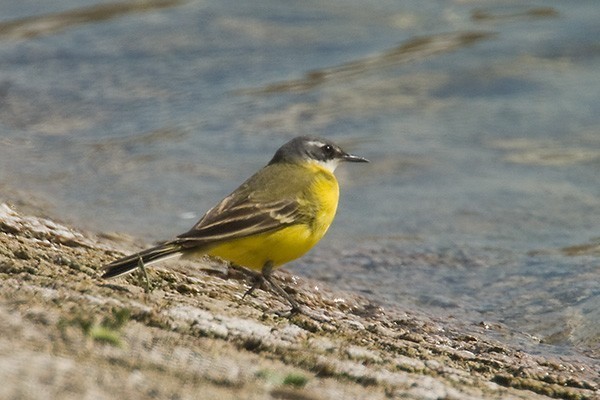 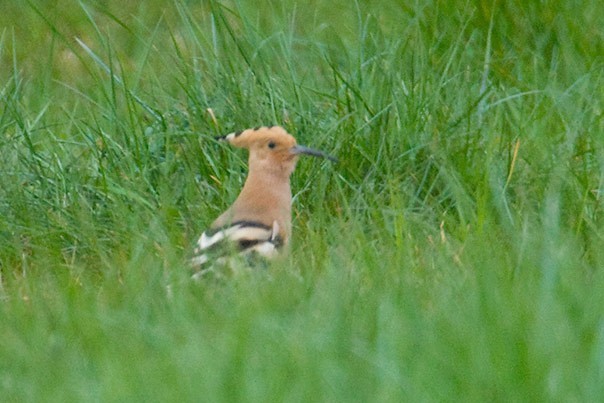 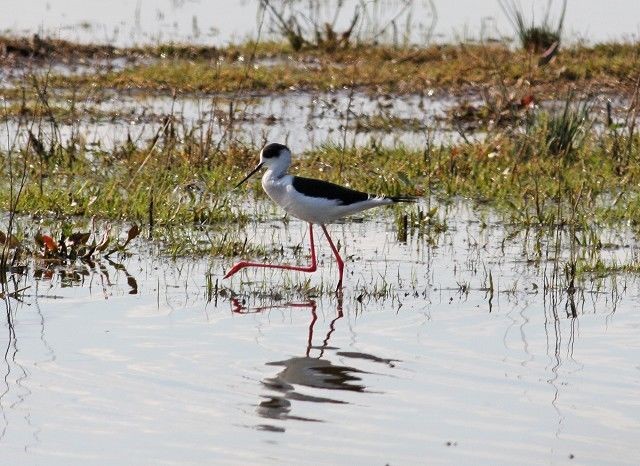 Two White-fronted Geese remained in the Ingrebourne Valley and were last reported from there on the 2nd and three sites held singles of Dark-bellied Brent Goose: Banbury Reservoir on the 2nd, Staines Reservoirs on the 27th, and Rainham Marshes on the 30th. The highly questionable Ruddy Shelduck was at Tyttenhanger/Willow's Farm Puddle up to the 26th at least. Six locales recorded Garganey, all singles except for three at Rainham Marshes on the 25th. A drake Eider flew north over Epsom Common on the 13th and four sites notched up Common Scoters, the most significant numbers being six at Banbury Reservoir on the 2nd and four on the Thames at Rainham Marshes on the 11th. Singles of Smew and Red-breasted Merganser hung on to the 15th and 25th respectively, both at Staines Reservoirs, but Goosander were still to be found at five sites. 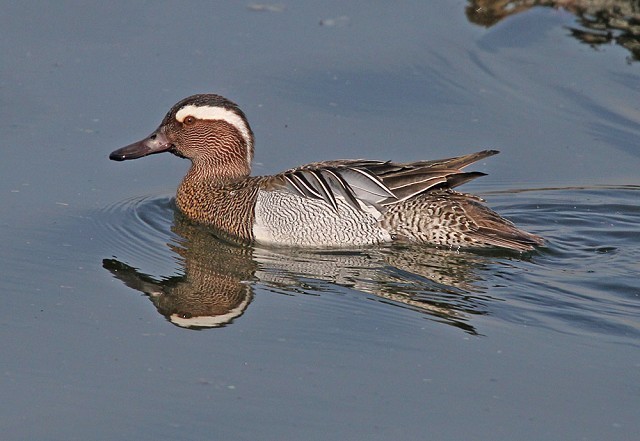 Great Northern Divers floated around four waterbodies, most notably at Staines Reservoirs for much of the month and Island Barn Reservoir similarly. Three sites reported Black-necked Grebes: King George V Reservoir on the 4th, Staines Reservoir (up to seven birds) to the 18th at least, and Tyttenhanger GPs between the 5th and 11th (this bird unfortunately suffered a broken wing and was found dead on the latter date). 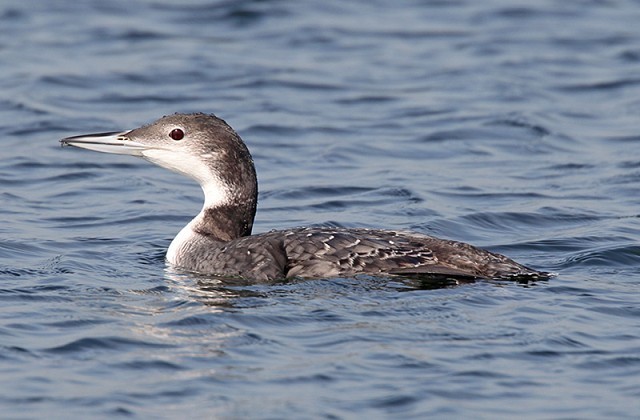 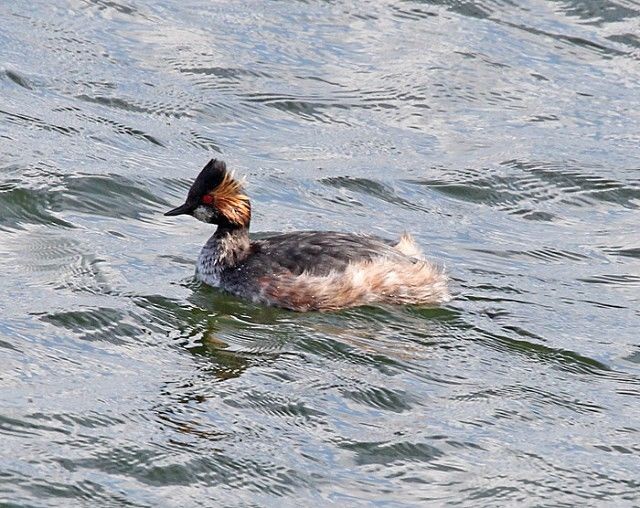 Two Shags were reported: northeast over Banstead Woods on the 14th and at Staines Reservoirs on the 28th and 29th.

The only reported Honey Buzzard passed over Rainham Marshes during the afternoon of the 29th, but Red Kites were seemingly everywhere! 42 sites saw mainly single birds pass overhead but 5–6 over Headley was much more impressive, and five Inner London sites were lucky enough to score a bird. Marsh Harriers were at or over 14 sites, most reliably Rainham Marshes where up to three were present throughout the month. The westward expansion of Goshawk will surely mean more sightings of this dramatic Accipiter across London, and April gave up records from no fewer than nine sites. These included a female northwest over Sewardstone Marsh on the 6th having had an altercation with a local female Sparrowhawk, a female over Horsenden Hill on the 10th, and one over Brent Reservoir on the 17th. Ospreys put in a fabulous showing with 13 sites recording this species; there was no doubt that there were fewer than 13 birds, however, as some were tracked between sites. Hobbies were over 34 locations with the bulk coming through from about the 20th onwards. 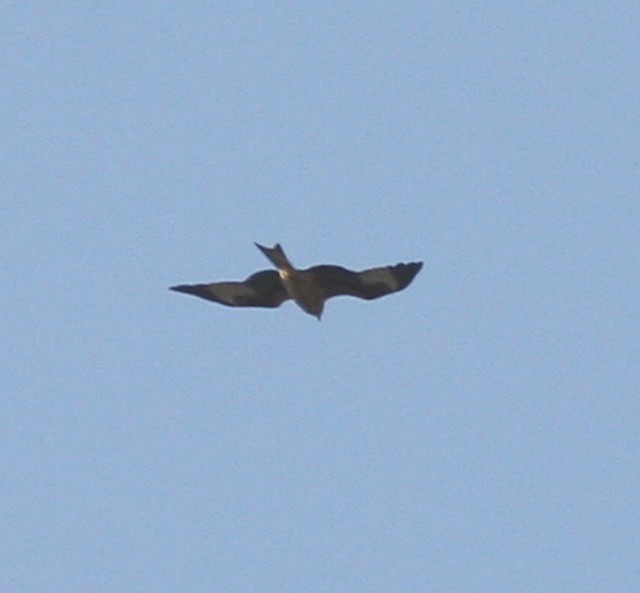 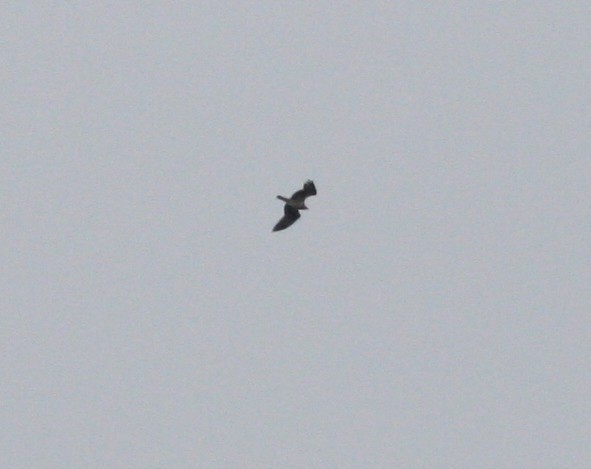 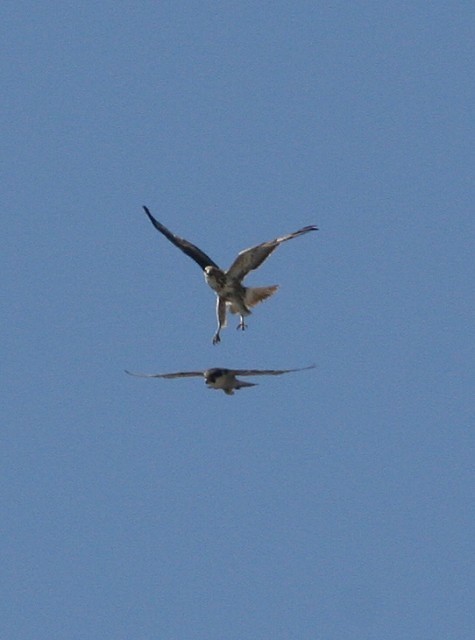 Little Ringed Plovers were a welcome presence at 24 locales but the only Woodcock of the period was a bird roding at Ruislip Woods on the 23rd. Noteworthy Tringas, namely Spotted Redshank and Wood Sandpiper, were to be found; the former was at Rainham Marshes on the 24th, 25th and 30th and Walton Reservoirs on the 29th, and singles of the latter graced three sites between the 11th and 22nd.

Just one Mediterranean Gull was reported, an adult at Island Barn Reservoir on the 6th but Little Gulls passed through ten sites; there was a continual presence at Staines Reservoirs between the 6th and the end of the month peaking at 30 on the 24th. The most notable count, however, came from King George V Reservoir with 62, also on the 24th. Rainham Marshes was the only site to hold Caspian Gulls with a third-year on the 25th and a first-summer on the 30th while Beddington SF witnessed a Kittiwake fly north on the 21st. 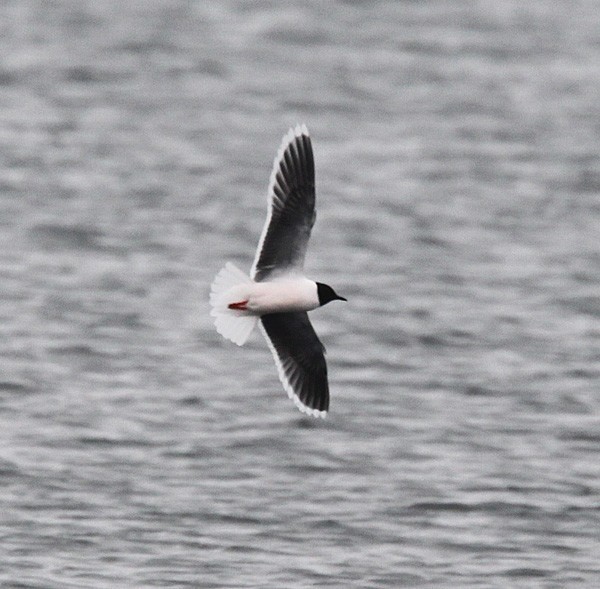 Four locations drew Short-eared Owls with the best being four at Rainham Marshes on the 3rd and a notable record of one over Horsenden Hill on the 10th. Just two spots reported Turtle Doves: two over Chafford Hundred on the 22nd and singles over Regent's Park on the 28th and 29th. Cuckoos were at 31 sites and included three at Cheshunt GPs on the 11th and a hepatic bird at Cornmill Meadows on the 24th.

Tree Pipits were at eight sites during the month but all were singletons with the exception of two at Wanstead Flats on the 26th, while Water Pipits were tracked down at four locales and included four at Rainham Marshes on the 3rd. At least 30 spots recorded Yellow Wagtails; 24 at King George V Reservoir on the 21st was easily the best count. Two Grey-headed Wagtails were reported — at Forest Gate on the 14th and Wanstead Flats on the same date — while a Blue-headed Wagtail was at King George V Reservoir on the 21st. Some 20 sites attracted White Wagtails from the beginning of the month with nine at both Staines Reservoirs on the 8th and King George V Reservoirs on the 9th.

Five sites were graced by Nightingales with the Lee Valley being the most productive area for an encounter; Fisher's Green held six on the 22nd and Holyfield Marsh held seven on the 21st. Black Redstarts added vibrancy to 15 sites; most were clearly passage birds and all were singles, apart from two birds at two locations. Single Common Redstarts added flair to 13 spots between the 7th and 24th while Whinchats showed up at 15 well-watched sites including a peak of six at Crossness on the 30th.

Ring Ouzels put in a particularly good showing during the month with at least 19 locations holding this much admired species. The most productive site was easily Nore Hill, Chelsham, which reported single bird(s) on three dates up to the 17th and then held three between the 20th and 23rd. 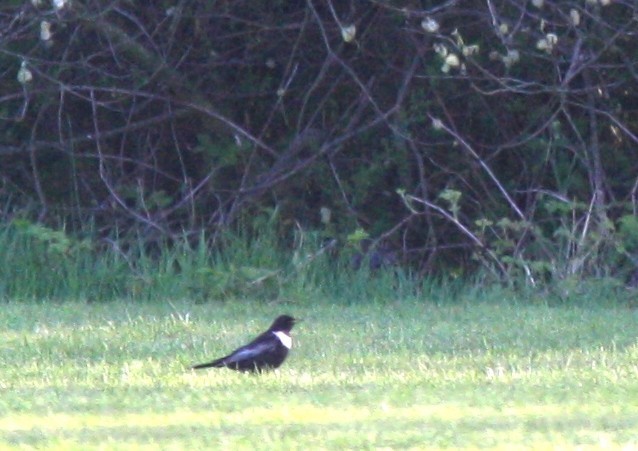 Cetti's Warblers were reported from a healthy 18 sites and included an astonishing 44 birds in the Ingrebourne Valley on the 21st and 24 at Rainham Marshes on the 7th. At least 18 locations buzzed with reeling Grasshopper Warblers with six at Rainham Marshes on the 25th being the best count. Wood Warbler can only be described as a spring rarity in London these days, so one at Weald Park on the 27th was notable. Firecrests were gleaned from five sites between the 3rd and 21st; most were singles but two birds were at two locations. 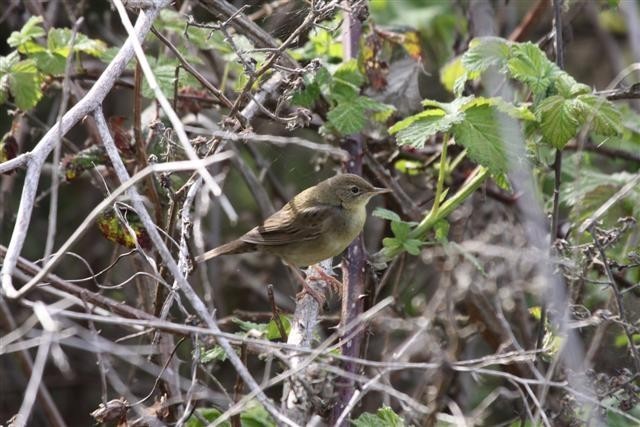 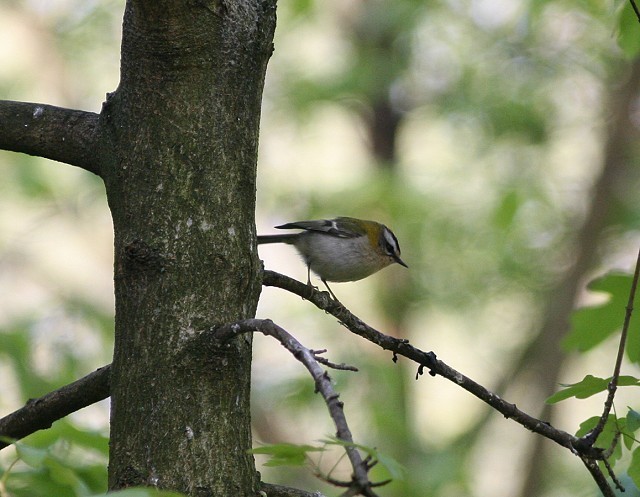 The only Pied Flycatcher of the month, a male, was found at Greenwich Park on the 21st and was still present the following day, while Rainham Marshes hosted a Bearded Tit on the 26th. Ravens were over two sites: Betchworth on three dates and Galley Hill in the Lee Valley on the 21st. A possible Mealy Redpoll was at Trent Park on the 3rd and a Hawfinch was a pleasing find at Richmond Park on the 11th.