August is one of my favourite birding months. It may be a few weeks until migration reaches a peak, but I always like to make sure I have some time to go birding locally each day at this time of year. If birding was panning for gold, August is the month that delivers satisfying little nuggets with every sweep.

I'm very lucky that the South Downs landmark Cissbury Ring is close to the edge of Worthing, where I live in West Sussex. The historic and scenic hillfort is a well-known birding location but receives relatively little coverage. Some birders may be put off by its position 6 km inland, but the coast is in clear view and the high ground offered by Cissbury means it gathers birds in a similar way to a headland. 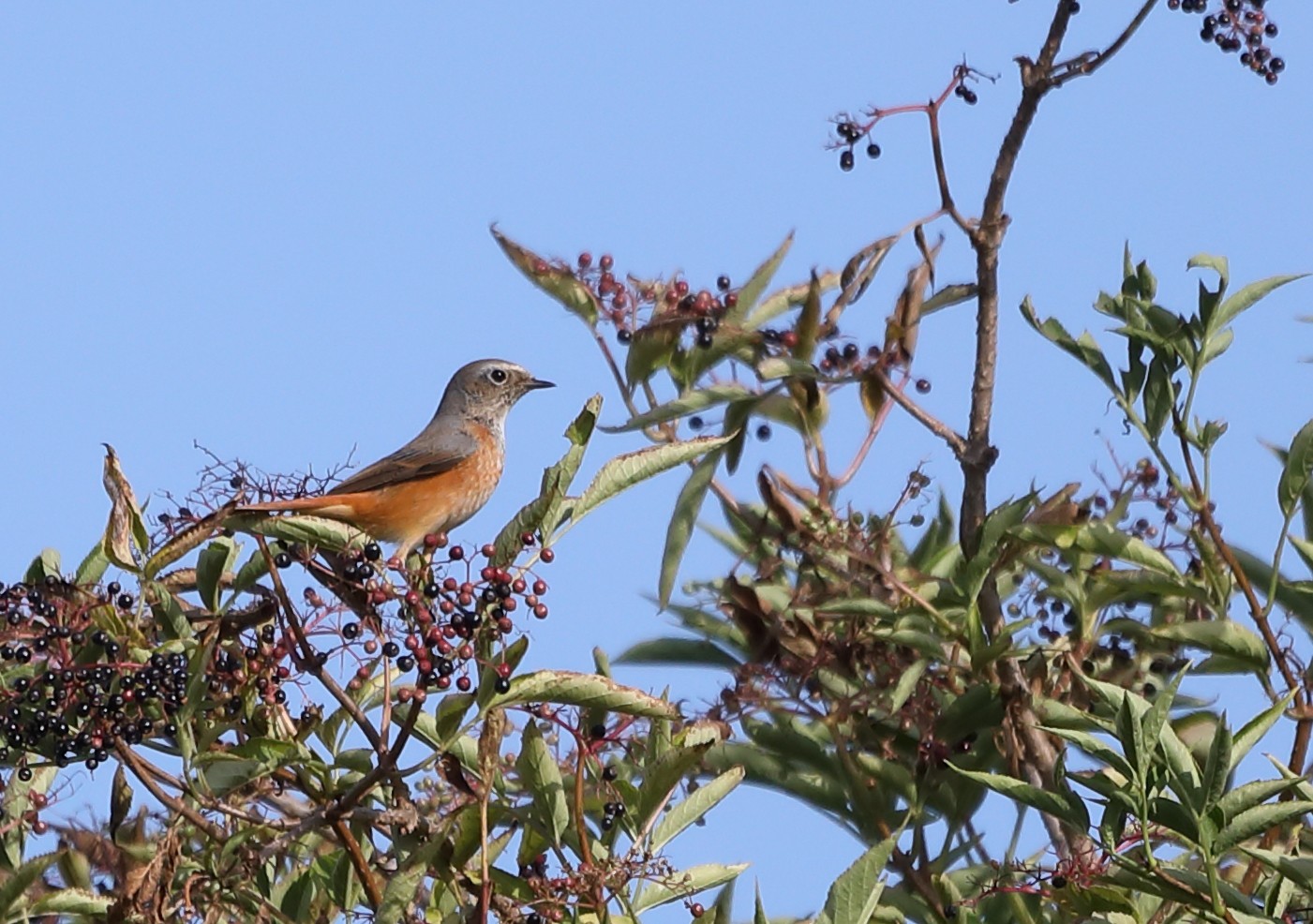 Among my rotation of local sites, within a 10 km radius of Worthing Pier, I always prioritise Cissbury in August as early autumn migration there is unrivalled in the area. Birds like Common Redstart, Tree Pipit, Western Yellow Wagtail and Willow Warbler have been in good supply this August, ensuring no visit is a dud. My best visit was on 14th, when a migrant Common Nightingale revealed itself after calling incessantly, two Pied Flycatchers were in a clearing with some Spotted Flycatchers and a distant Western Marsh Harrier tracked the coast to the south. Three days later, another highlight was a heard-only Greenshank somewhere in the drizzle, my sixth species of wader at this totally dry site. 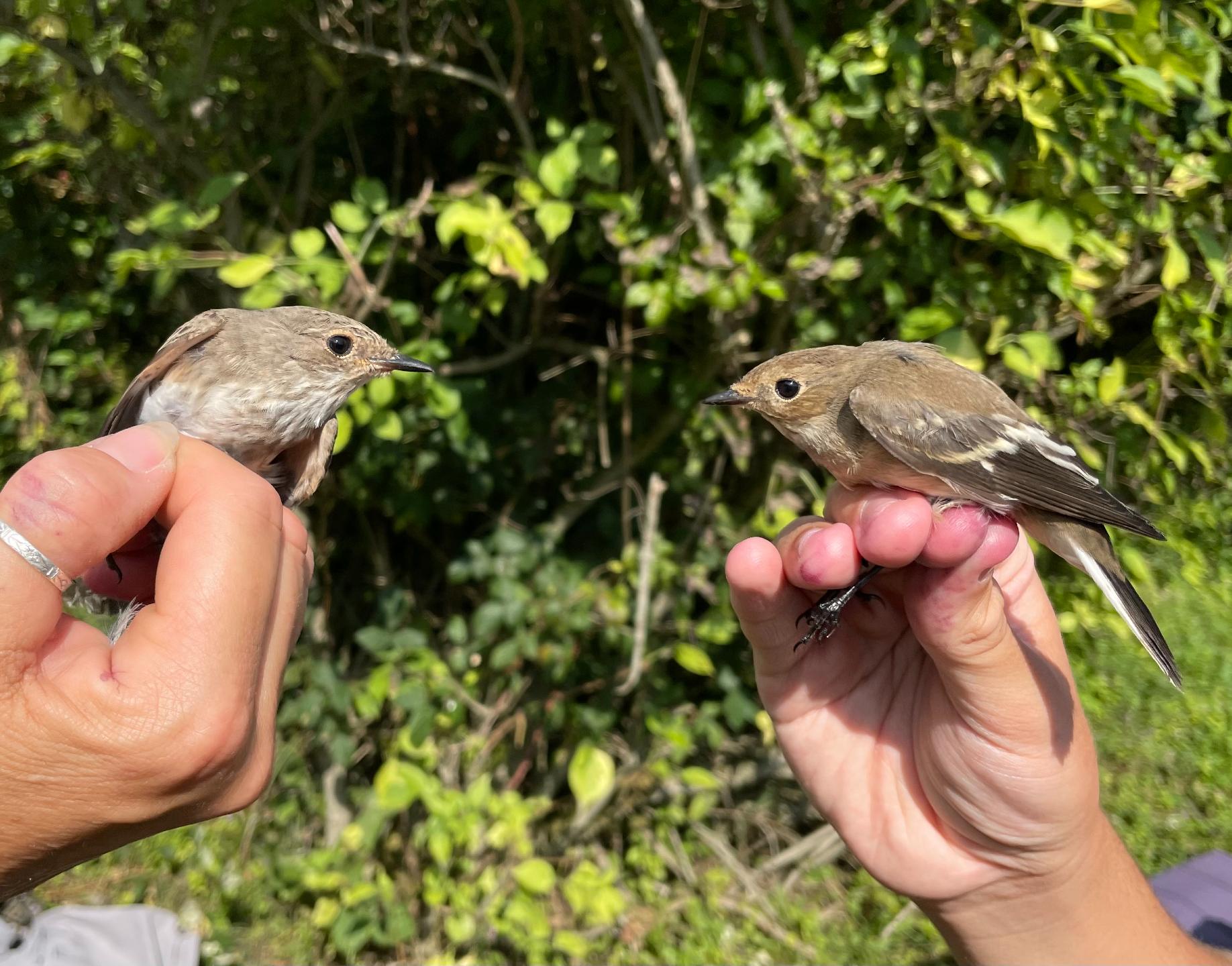 One particularly productive ringing session saw both Spotted (left bird) and Pied Flycatchers end up in the ringing nets at Cissbury (David Campbell).

The Grasshopper Warbler was my second of the autumn, following one seen in the field a few days previously at nearby Steep Down. This species is becoming painfully difficult to find locally, and I had resigned myself that, with no spring birds, I was probably going to have a blank year, so two in August was a terrific result. As of one my favourite species, I really hope we see them become commoner again one day soon.

The Adur Estuary, which runs through Shoreham, is just within the 10 km radius and offers a different suite of species. A couple of visits delivered treats like Whimbrel, Greenshank and Common Sandpiper, and building flocks of Dunlin and Ringed Plover.

Beyond the immediate local area, I consider Sussex my wider birding playground, rarely straying from it these days. After returning from a wedding in Finland at the turn of the month, I was happy to catch up with the Squacco Heron by the North Wall at Pagham Harbour but was too late for either of the remarkable two White-rumped Sandpipers which had been found in the area while I was away. A roosting Glossy Ibis there was another highlight, as was a Wood Sandpiper at Pulborough Brooks. I made a couple of visits to both Beachy Head and Sheepcote Valley, these sites delivering a similar array of passerines to Cissbury Ring.

August may have passed without a find of wider significance for me, but I relished every day in the field, each offering something different, and the chance to enjoy a steady stream of fantastic passerines. I'm really looking forward to seeing what the rest of the autumn brings!