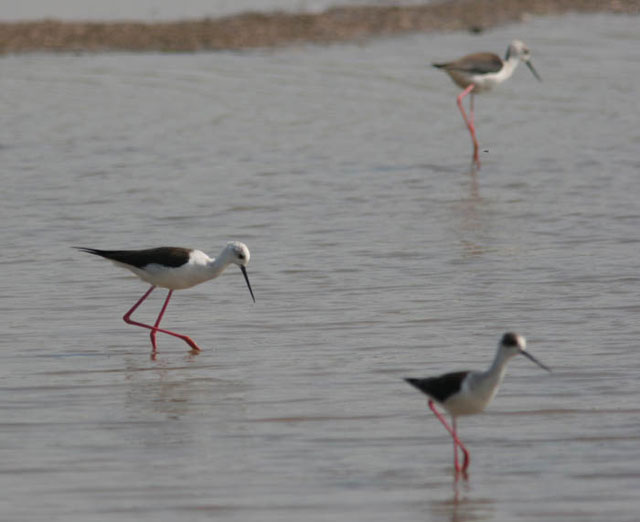 When asked to reprise this article, which I originally put together in 2002, I must admit that I thought it would be just a case of changing the odd line or two here and there to bring it up to date. How time plays tricks with the memory! As soon as I looked through the text I realized just how different the birds on my local patch are now compared to just five years ago but the changes are absorbed and it is all too easy to forget subtle differences in status which we come to accept from year to year. So I have had to have a good look through my patch year-lists and start again!

Since 1993 I have kept a regular check on the number of species that I have encountered each year on my local patch at Barton-upon-Humber in Lincolnshire. I include records from the whole of the parish, which includes the clay pits, the Humber estuary and areas inland on the lower edge of the Wolds. Although the habitats are fairly varied and the estuary is a major advantage in that it not only provides feeding for waders and wildfowl but also acts as a migratory highway for cross-country migrants, some types of habitat are distinctly limited. The only mature woodland is in Baysgarth Park, where ritual management removes all dead timber and any sign of an under-storey. Mature trees are thinly spread and grassland is now very limited in extent. There is no doubt though that the site is good for birds and I am sure that if there were more active birders more rare birds would be found on an annual basis. 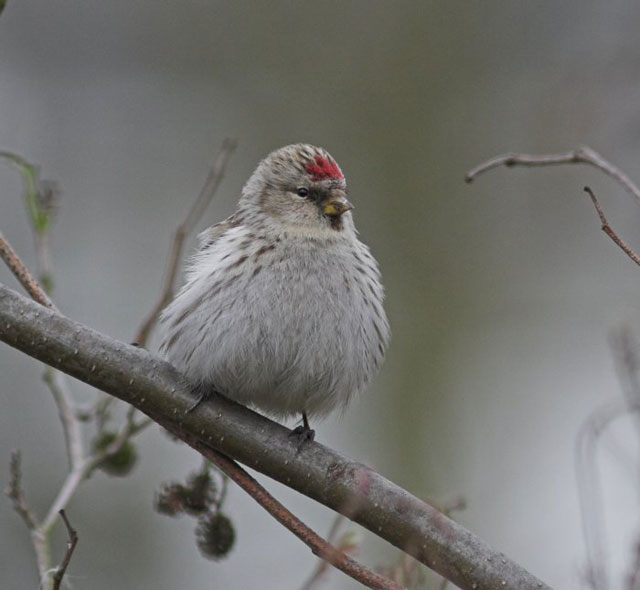 During an average year I used to spend part of at least 280 days a year doing some birding on the patch rather than just looking out over the garden and the skies above, but in recent years more commitments have reduced this amount to probably in the region of 220 days a year. Birding activities vary with the time of year but surveys figure prominently. The winter months involve regular wildfowl monitoring and checking on Bittern presence. From March to September I undertook a breeding census of all the waterfowl and a variety of other species along the clay pits through to 2004 when other demands on my time made this extensive task impracticable. The surveys involved locating all pairs of waterfowl, checking on production of young and fledging success and took up an awful lot of hours as the Barton-Barrow Haven clay pits cover almost 150ha and accessing them all is difficult. In recent years I have also spent many hours monitoring breeding Marsh Harriers and Bitterns, Bearded Tits and Water Rails. Even doing a census of Willow Tits is very time-consuming but every hour in the field has the potential to produce something unexpected. From 2000 to 2006 I also did an annual Breeding Bird Survey and produced an annual report of all bird records from the newly established Water's Edge Country Park for North Lincolnshire Council. The latter survey has produced some particularly interesting results plotting the development of this site from a post agro-chemical industrial site to the area which it is today. 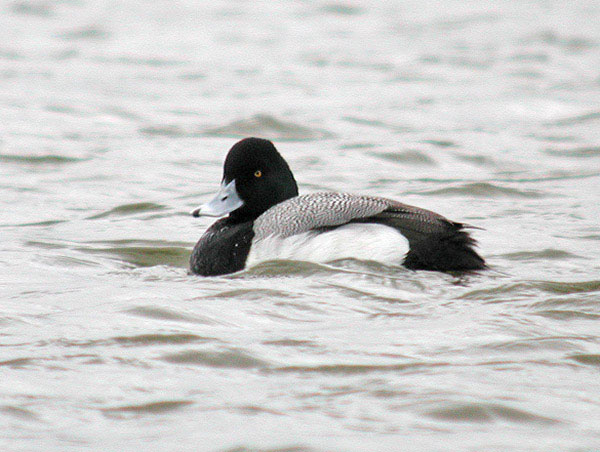 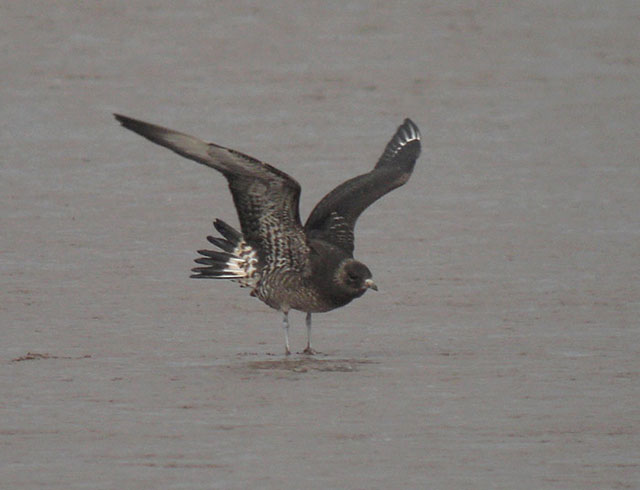 Pomarine Skua October 2004 - only recorded in seven out of 14 years (Photo: Graham Catley).

Autumn used to include many hours watching from the Humber Bridge viewpoint counting migrant flocks of wildfowl, waders and passerines. In the right weather conditions time was spent looking for skuas and displaced seabirds but in the last three years fewer seabirds seem to have been appearing and the number of hours watching has decreased accordingly. Although Barton is 18 miles from the open sea it produces a good selection of seabirds in some years but exceptional occurrences need exceptional weather conditions, which are infrequent. The best weather for the bridge is a gale force south-easterly with rain, preferably having blown all night prior to a rising tide in the morning. The best blow of the 1990s for variety occurred on September 13th 1993 and brought in a juvenile Sabine's Gull, Manx Shearwater, 28 Great Skuas together, 60 Arctic and three juvenile Long-tailed Skuas and Leach's Storm-petrel. Other days have had less variety but greater numbers of some species; on September 20th 2001 there were 107 Gannets flying around within half a mile of the bridge at one time, a most amazing sight.

But what of local patch-listing? Well it adds a little spice to the year and reveals trends that may well not occur to most birders. During the 14 years that I have done a Barton year-list I have recorded a total of 238 species, ranging in any one year from a low of 156 in 2006 to the all time high of 184 in 1996. The latter year was remarkable for several things but in essence combined some excellent northerly, and easterly, gales both in the early winter and autumn producing all the scarce grebes, Black-throated Diver and most of the expected auks and all three redpolls - but it also featured some strange misses like Garganey! 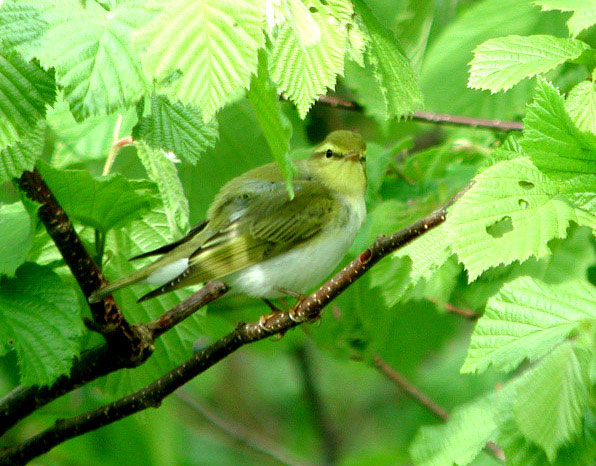 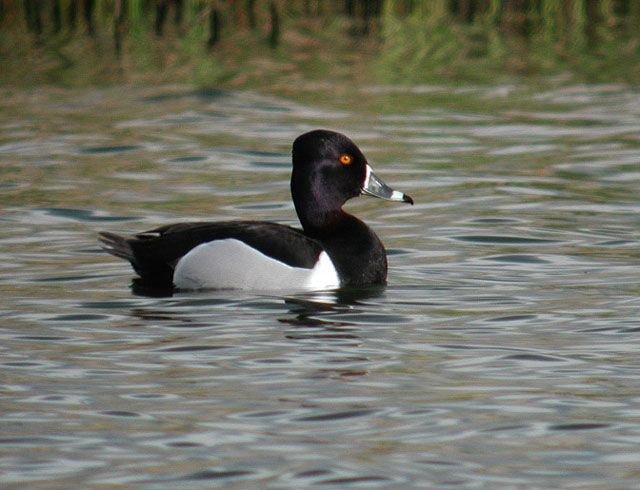 Ring-necked Duck May-June 2003; an absolute stunner - there have been at least five birds around the pits since the first in 1979 (Photo: Graham Catley).

In the 14-year period a total of 21 species have occurred in just a single year, 16 in two, 13 in three, three in four, 10 in five, six in six and five in seven. Only 122 species have been recorded in all 14 years, 51% of the total. The range of species recorded has been quite wide. Out of the all-time total of 252 species that have been recorded in the parish, I have connected with 97.6% since 1968 and 94.4% of this total during the last 14 years. Some species, such as the rarer grebes, Glaucous and Iceland Gull and Little Owl, have become harder to see while others like Avocet, Hobby and Marsh Harrier are now expected. 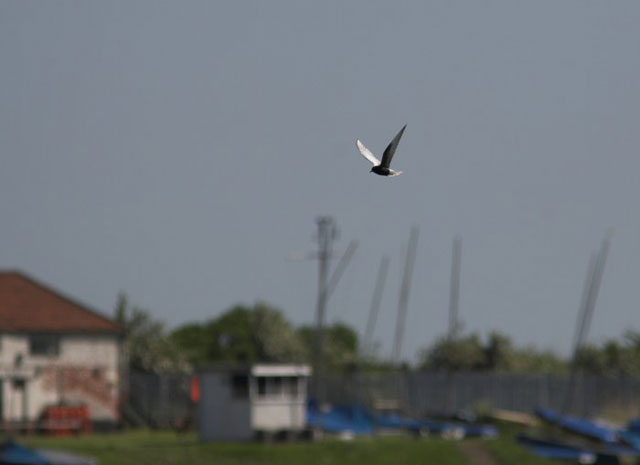 Rarities are just that, but some good birds have come my way in the 14 years - not necessarily through looking for them though. The Little Swift passed through my scope view while I was checking on the welfare of a pair of nesting Common Terns, a moral for all in survey work there. Lesser Scaup, Green-winged Teal, Ferruginous and three Ring-necked Ducks were down to daily scrutiny of the wildfowl on the clay pits. My first White-winged Black Tern was down to trying to get fit by riding a bike, while Pectoral Sandpiper and Richard's Pipit were found during routine survey work and the 1992 Marsh Warbler was heard singing while playing football with my son. Entertaining the family can be productive; it all depends on where you take them for the entertainment! Even the back garden can produce good birds if you keep alert. Another football knock-about produced my first garden-tick Mediterranean Gull hawking insects and while watching it I picked up a Peregrine - two ticks in a day. Washing the car one November afternoon revealed a Firecrest in the neighbour's hedge and I have even managed fly-over Bearded Tit and Ring Ouzel from my garden, which is roughly in the centre of the town.

In most years I don't miss many species that other local birders record, but in 2001 there were another eleven species that I missed due to a variety of circumstances. The most galling were the first Barton Wryneck and Spoonbill, both of which I am still missing on the patch, and a spring Honey Buzzard. The latter occurred when, as usual, there were only two of us covering the site so we split up to produce better coverage and stand more chance of locating something good. Steve Routledge got the Honey Buzzard and I got not a lot! I got him back though a couple of weeks later: as he drove home I walked out of the hide at Far Ings and a superb adult Long-tailed Skua flew over soaring up and moving off east, the first spring record for the area. In 2006 I was delighted to find the first Red-veined Darters for the patch and put the news out to other locals. Niel Drinkall and Steve Routledge turned up as I set off for work and a Great Reed Warbler started singing in the reeds 100m from where I had been parked; now that is just bad luck!

There are always more birds to aim for on your patch. At Barton in recent years we have added a few long-standing absentees including Temminck's Stint, Cetti's and Great Reed Warbler as well as Purple Heron, but there are a number of scarce and rare birds associated with reedbeds, of which we have plenty, that have never been found rather than having never occurred. Savi's Warbler, Night Heron, Great White Egret and White-spotted Bluethroat are all overdue but with recent additions including Woodlark, Common Crane, Richard's Pipit and Yellow-browed Warbler anything is possible. 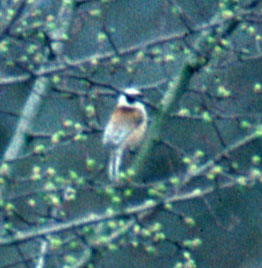 Penduline Tit: April 2001, the first for Barton and one of my best finds while concentrating on Waters' Edge in the F&M spring (Photo: Graham Catley).

Obviously a local patch on the coast is going to produce more species per annum than one inland but there is always a greater achievement in seeing a bird on your patch than elsewhere. Try it and see; patch listing can add a whole new dimension to your birding routine. 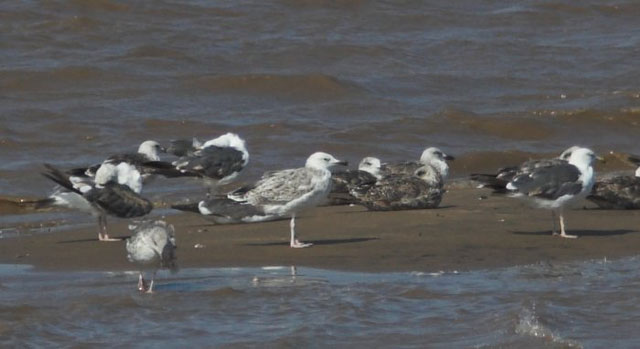