Always a favourite with birders, Little Gull is an elegant, attractive and charming species that invariably brightens a day's birding. It can be found in Britain year round, although its numbers and distribution vary considerably, both with the season and prevailing weather conditions. In contrast, the other two potential confusion species featured here, Black-headed and Bonaparte's Gulls, are abundant and rare respectively.

Little Gulls (Seaforth, Lancashire, 15 April 2008). This spring flock of Little Gulls demonstrates a typical variation in hood development, with one already fully black but almost all the others still with winter-type patterns. The sole first-winter bird (seventh from the left) is easily discernible by its distinctive upperwing pattern and black tail band (Steve Young / www.birdsonfilm.com).

This species breeds colonially in freshwater marshes across Eurasia, where it can be quite common, and in North America, where it is rare and localised. Despite several previous attempts, Little Gull only bred successfully in Britain for the first time in 2016, when two youngsters fledged in Aberdeenshire. Though not a regular breeder here, non-breeding immatures can routinely be found across Britain and Ireland during the summer months, particularly in eastern areas, where they tend to be most numerous.

It is more pelagic in nature during winter, with Western Palearctic populations frequenting the Atlantic coasts of western Europe and the Mediterranean, as well as the Black and Caspian Seas. During this season, the birds are most often encountered in Britain and Ireland when forced close inshore by inclement weather conditions.

Little Gulls are best seen in Britain and Ireland when on migration. Large numbers pass through on their way to and from breeding grounds in northern Europe, and they can routinely be found at inland waterbodies as birds take shortcuts across land. In spring, east or south-east winds from mid-March to mid-May can produce good passage across southern England and the Midlands, especially if this airflow occurs in conjunction with precipitation, which forces birds to temporarily halt their movements. At this time of year, particularly in late April and May, adults will be at their resplendent best, making them a sight to treasure.

Return migration is somewhat more protracted, with the first returning adults joining non-breeding immatures from July and passage continuing well into the autumn.

As with other gulls, Little Gulls are quite site loyal, returning to the same staging grounds year after year. Until very recently, Seaforth Nature Reserve, Lancashire, would hold big flocks annually from late March to May, although a change in food availability means they now gather off Hoylake and Leasowe, Cheshire. In summer and early autumn, Hornsea Mere, East Yorkshire, ranks as Britain's top site for the species. Numbers increase from the beginning of July, peaking later that month and in August, when several thousand can be present; for example, 7,800 were counted on 9 August 2017. Several other staging sites attract good numbers at this time, including Arbroath, Angus, which regularly produces counts of up to several hundred in August.

Adults exhibit a strikingly dark underwing which, coupled with its contrasting broad, white trailing edge, is unique among Europe's small gulls. This, combined with the white tips to the primaries and paddle-shaped wings, generally makes identification straightforward. At rest, the legs are obviously short and red, being brightest during the breeding season. In summer (April-July), a complete black hood is attained. The bill is black.

Immatures can superficially resemble several other species of small gull. When seen in flight, second-calendar-year birds exhibit a strong, unbroken 'W' pattern on the upperwing, formed by a solid brownish-black 'bar' across the median coverts and largely brownish-black primary coverts and outer primaries. In contrast to older birds, the underwing is usually very white. The presence of a black tail band is variable dependent on the state of moult, but it is generally broken by spring. The legs are usually a varying shade of red and the bill is black.

Despite the obvious size differences, Black-headed Gulls – particularly immatures – can pose identification challenges. In second-calendar-year birds, there are several differences in the upperwing, with a less distinct median covert bar and considerably more white in the primaries and primary coverts, meaning the upperwing generally looks greyer and less dark than in Little Gull. The underside of the primaries show a 'shadow' of mid-grey, thus looking less clean than the white of immature Little Gull.
Structurally, Black-headed Gulls are longer legged and longer billed, the latter varying from a mid-orange (with dark tip) to deep reddish in colour, depending on the season. At all ages, any summer-plumaged Black-headed Gull exhibits a dark brown (not black) hood, with an obvious white eyering – which Little Gull lacks.

In terms of size and structure, North America's Bonaparte's Gull is a 'halfway house' between Black-headed and Little Gulls, with some plumage features also intermediate. Breeding adults exhibit a black hood, although have an obvious white eyering. At all ages, the underwing is a clean white, making it easy to separate from adult Little Gull – but less so from immatures. The bill is black and the legs pale pink, this flushing to a salmon-pink in breeding adults.

In flight, the upperwing pattern on immature Bonaparte's looks neat, clean and delicately constructed. Although the median covert bar is quite distinct, it never approaches the broad, bold pattern seen in Little Gull. A neat, dark trailing edge is formed by the black tips to the primaries and secondaries, a pattern not seen in Little Gull. 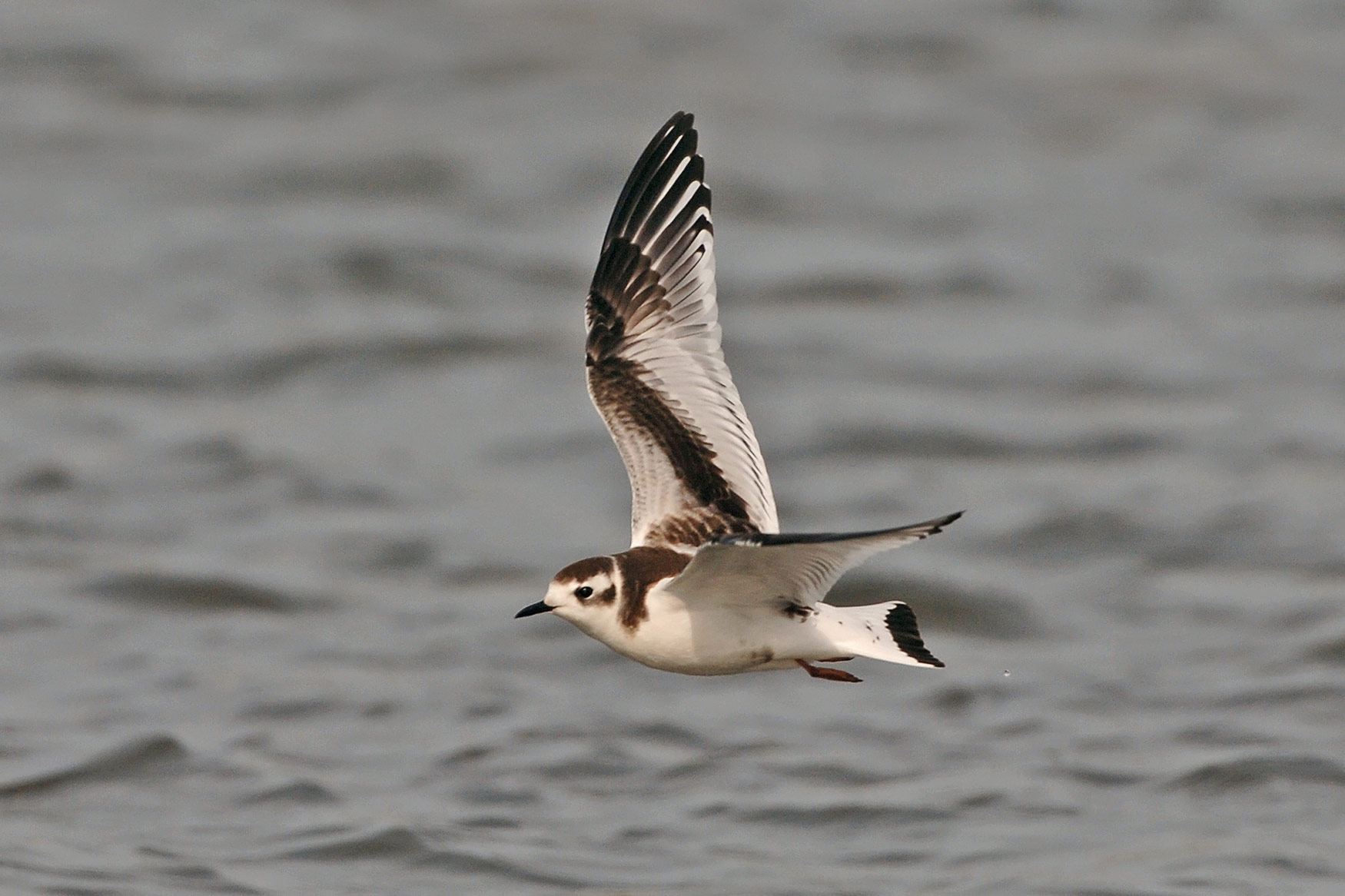 Juvenile Little Gull (Crosby, Lancashire, 11 September 2005). Little Gull is compact and dainty, with a rather short, fine bill. As well as the dark brown median-covert bar and primary coverts, and extensively dark outer primaries, juvenile plumage exhibits variable chocolate-brown mantle and scapular feathering, with this also extending onto the neck and cap. Note how white the underwing is at this age (Steve Young / www.birdsonfilm.com). 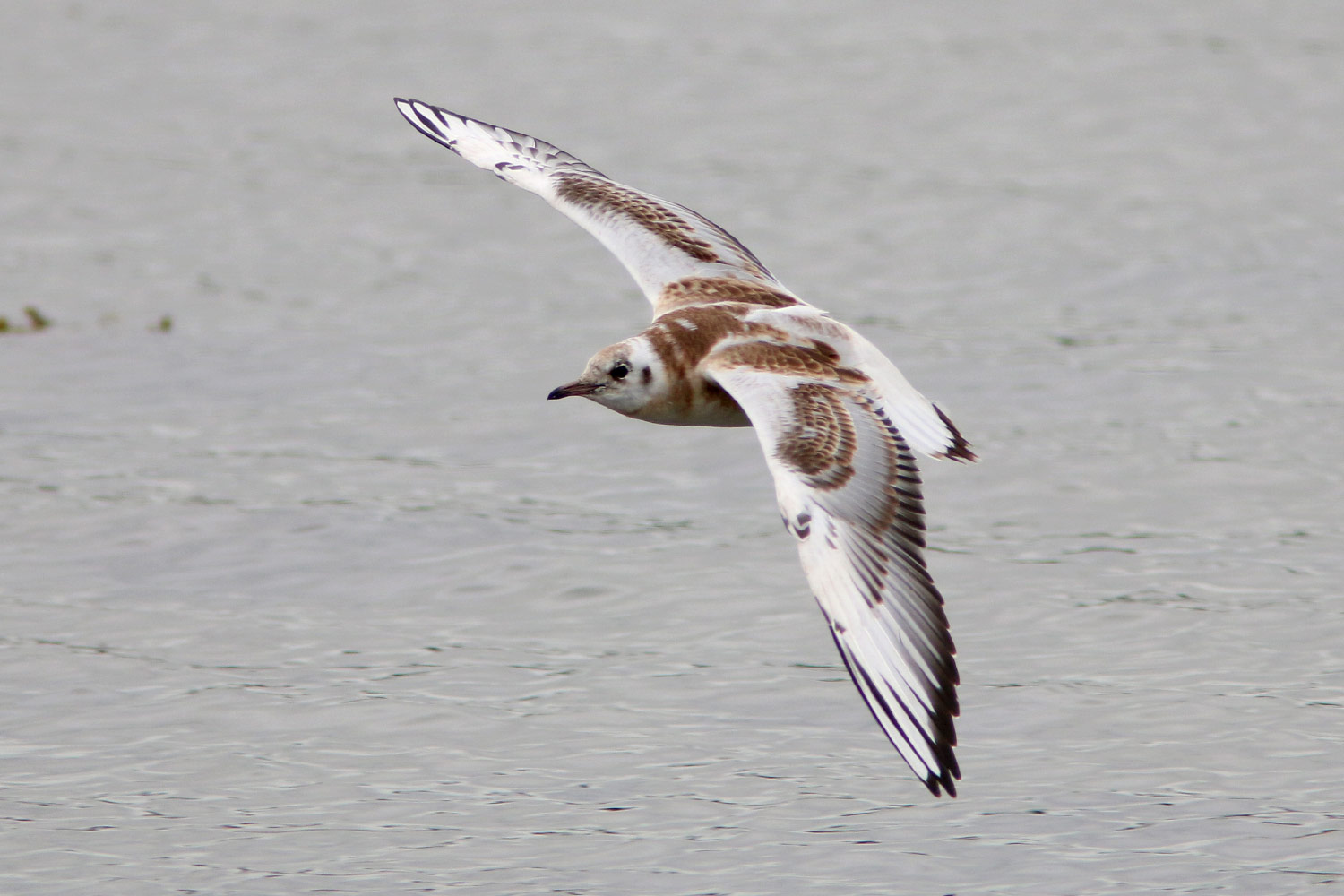 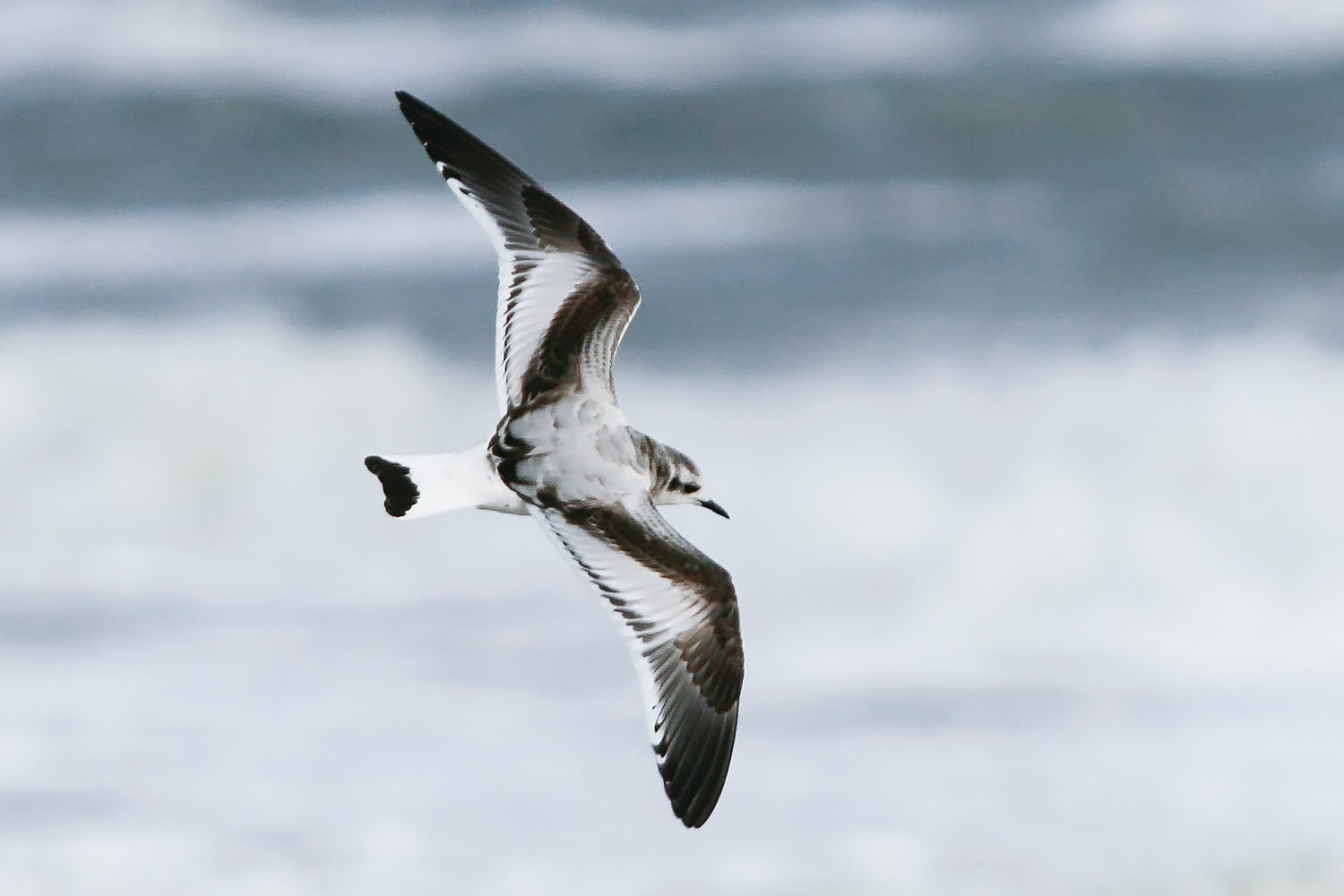 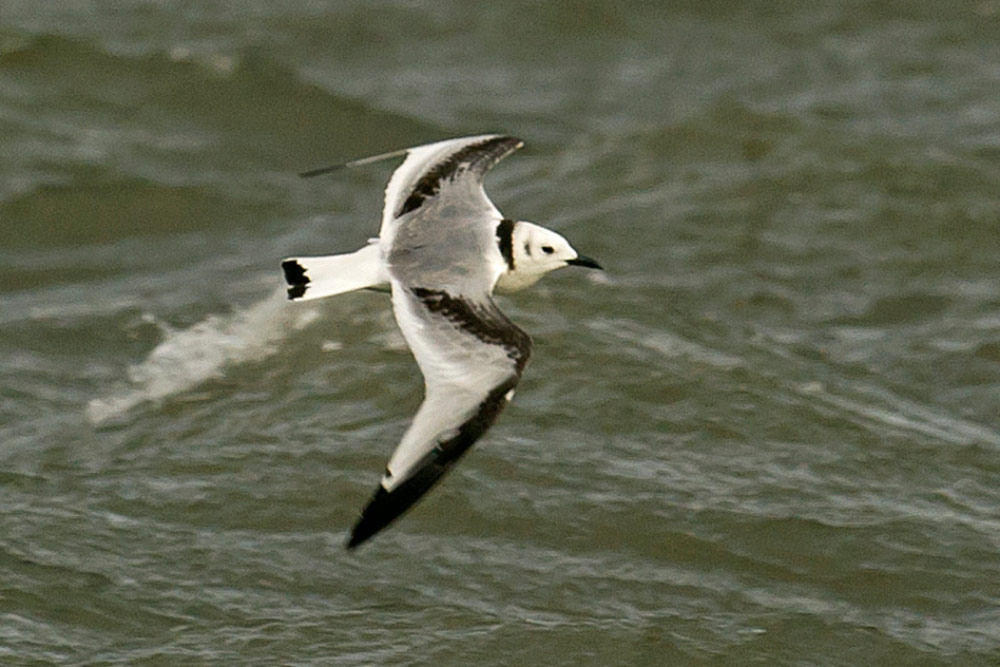 First-winter Kittiwake (Seaforth, Lancashire, 3 January 2012). First-winter Kittiwake is a potential pitfall for first-winter Little Gull, but it appears larger and more rangy in structure, while the 'W' pattern is more restricted and neater, with an obvious white trailing edge to the wing. There is also a distinct black marking on the nape, which is lacking in Little Gull (Steve Young / www.birdsonfilm.com). 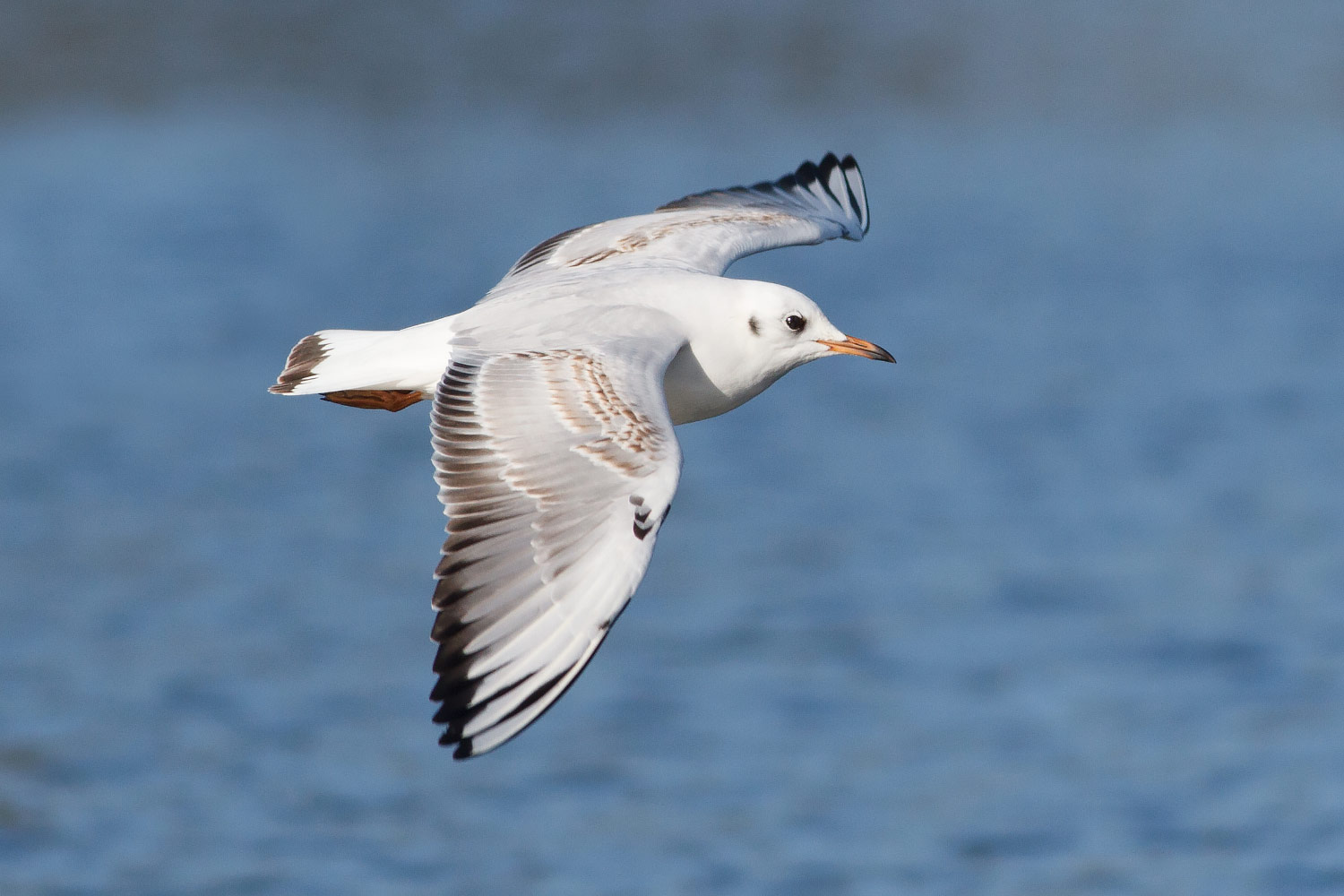 First-winter Black-headed Gull (Hyde Park, London, 30 January 2015). This perfectly illustrates how grey and uniform the upperparts of many first-winter Black-headed Gulls can look, with the faintest brown markings on the median coverts and a largely white – rather than black – outer primaries (although some are more extensively dark). Other features include the pale, dark-tipped bill, and broad, indistinct trailing edge to the wing (Josh Jones / www.joshrjones.com). 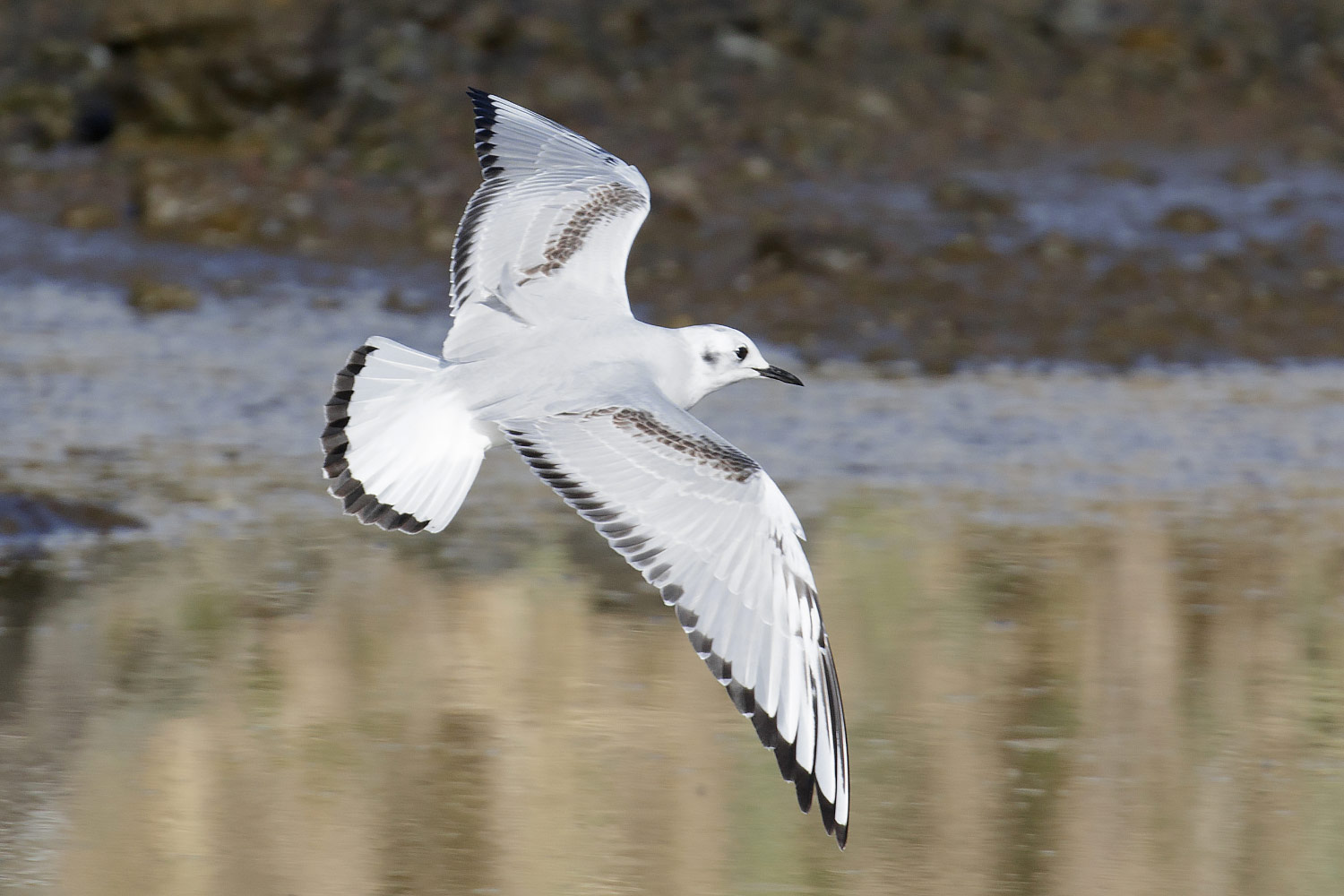 First-winter Bonaparte's Gull (Terceira, Azores, 17 February 2018). As in Black-headed, the upperparts of Bonaparte's are much cleaner than in Little Gull, with weaker markings and more grey overall. The markings on the median-covert bar are a darker brown than in Black-headed Gull and the species always shows a crisp, dark trailing edge to the wing. Note also the black bill, as in Little Gull (Josh Jones / www.joshrjones.com). 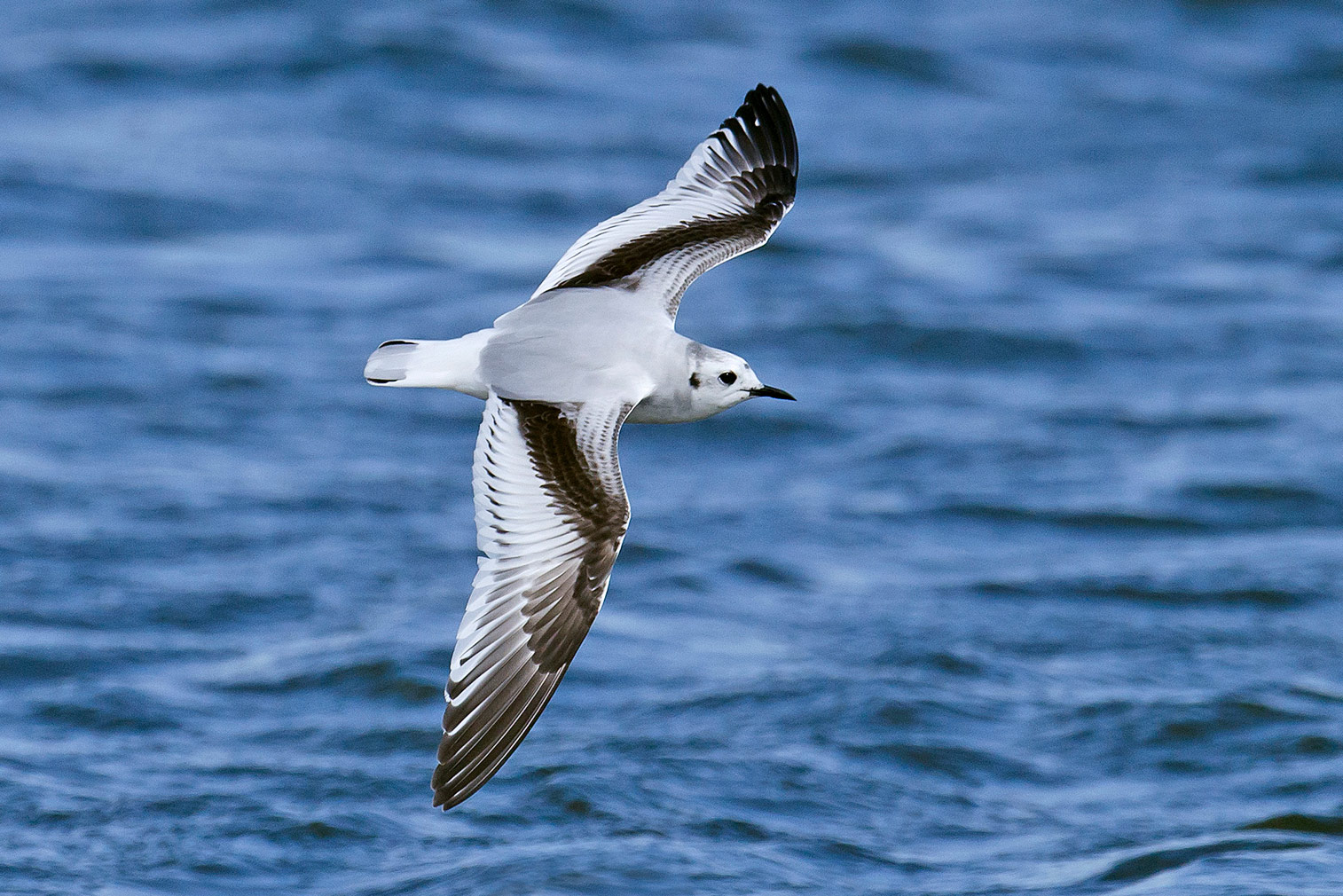 First-summer Little Gull (Seaforth, Lancashire, 17 April 2012). While this spring bird doesn't show any hint of a summer hood, one of the clues that this is a later-season individual is the moulted tail feathers, which are an adult-like all-white (Steve Young / www.birdsonfilm.com). 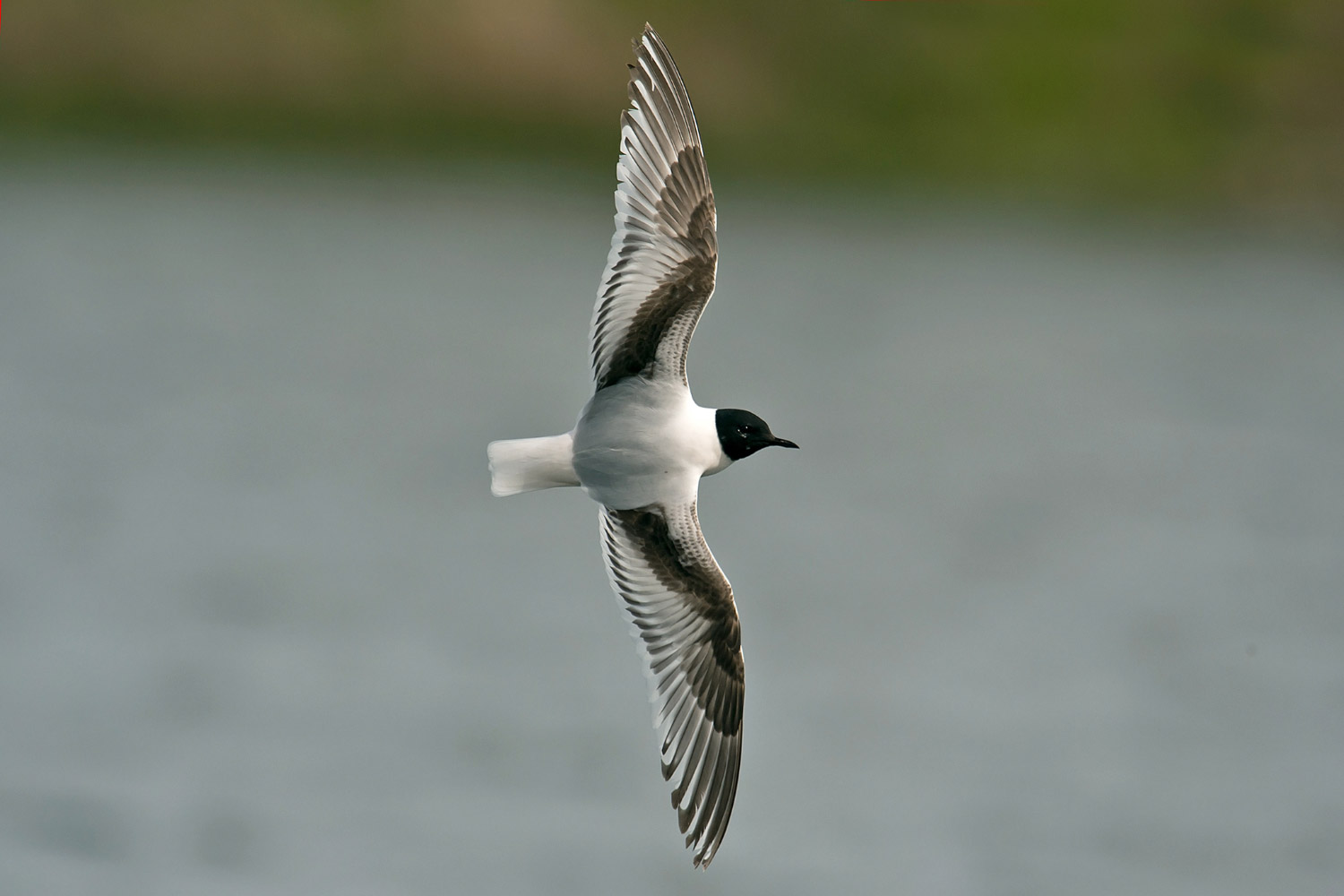 First-summer Little Gull (Seaforth, Lancashire, 8 May 2012). This individual is instantly recognisable as a first-summer bird, with a full black hood and a fully moulted tail. However, it is clearly not older than its second calendar year as it retains the juvenile-like upperwing pattern (Steve Young / www.birdsonfilm.com). 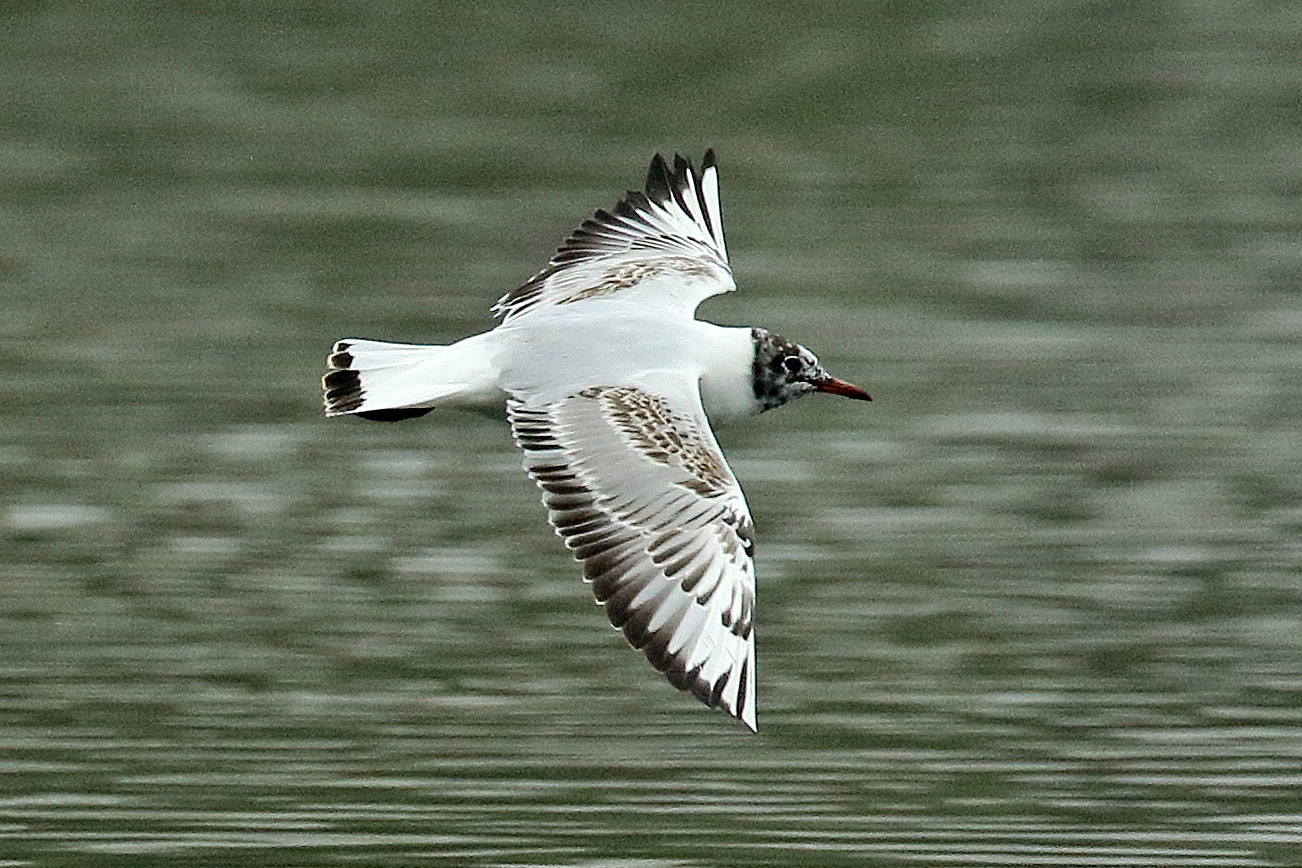 First-summer Black-headed Gull (Ponders End Lake, London, 8 April 2018). This Black-headed is developing a brown summer hood, though only in a minority does this become complete, and some retain 'winter' heads in their first summer. Note the long, reddish bill and upperwing pattern: a faint mid-brown median-covert bar and broad, indistinct dark trailing edge, which make it readily separable from Little and Bonaparte's Gulls of the same age (Dominic Mitchell / www.birdingetc.com). 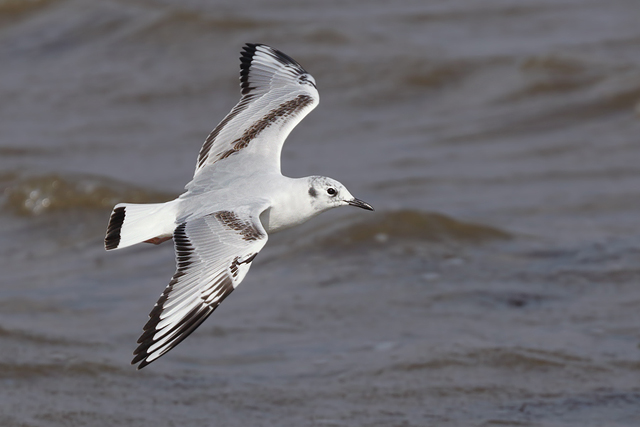 First-summer Bonaparte's Gull (Hengistbury Head, Dorset, 3 May 2017). Bonaparte's Gull tends not to display much of a hood in its first-summer plumage, instead retaining a winter-type hood or, at most, black speckling around the head, as in this bird. Note the neat brown median covert bar and black trailing edge to the wing. This bird appears to have quite extensively dark outer primaries, although the overall strength of the upperwing pattern still falls well short of typical Little Gull (Joe Murphy). 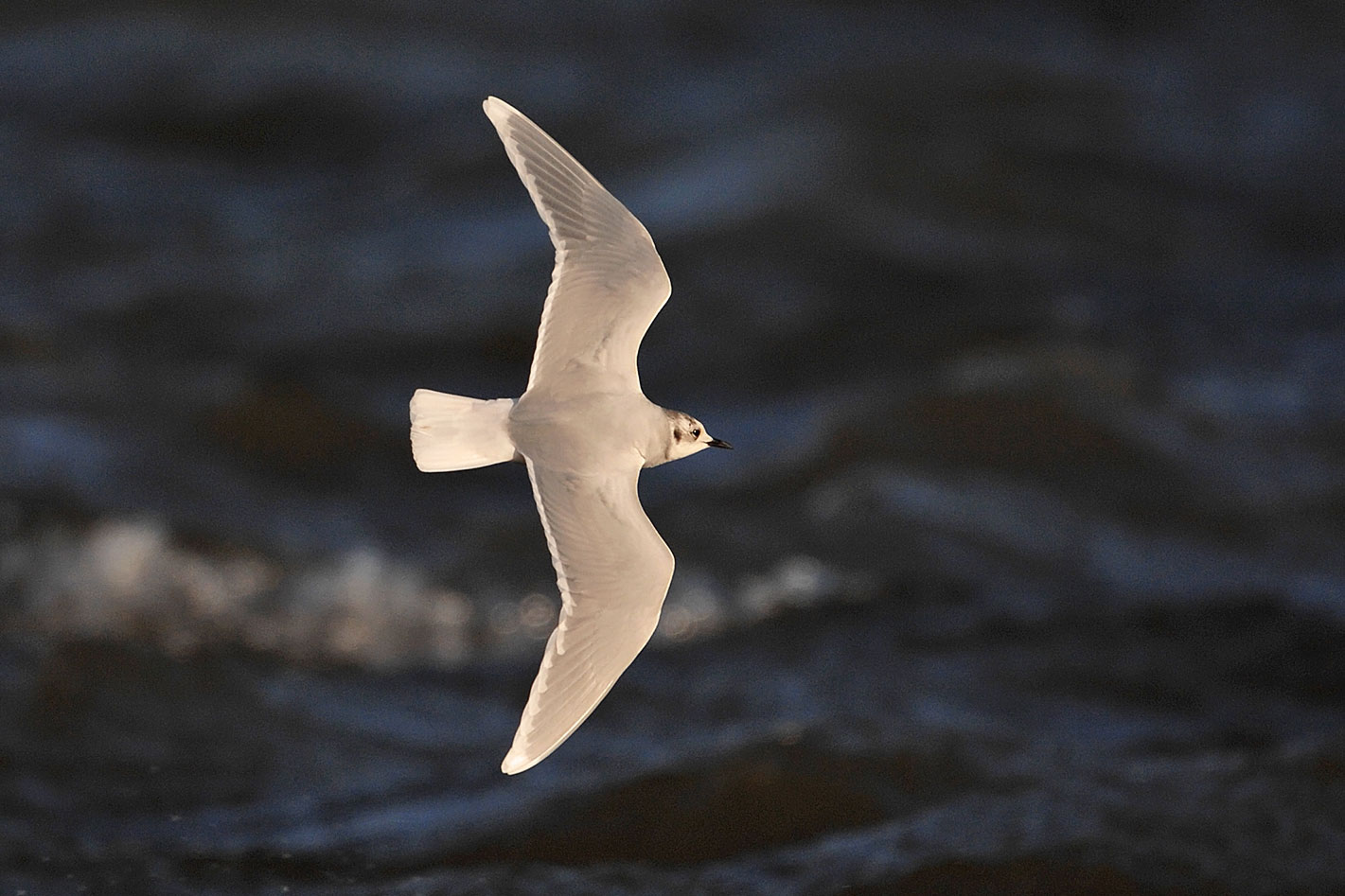 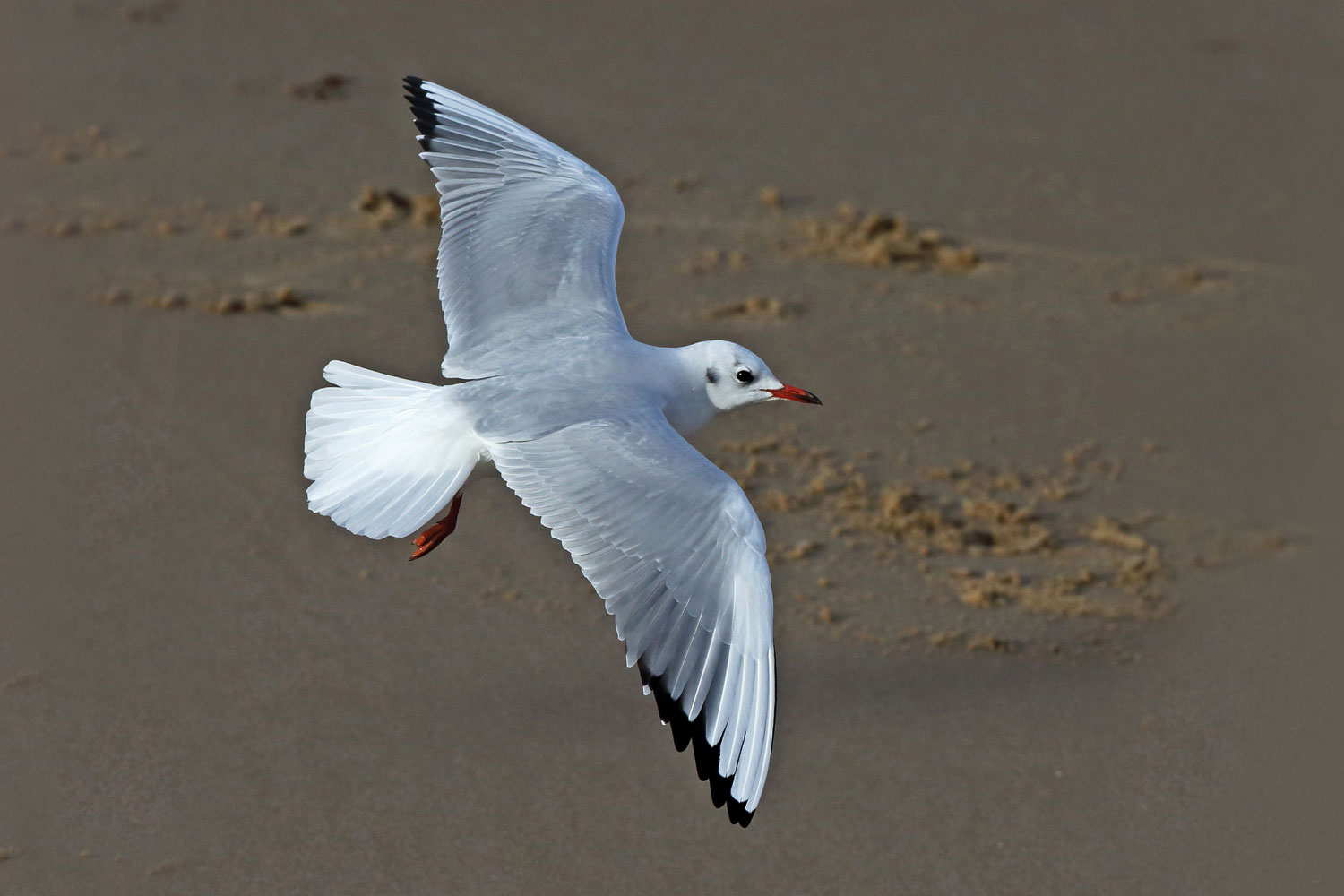 Adult winter Black-headed Gull (Walcott, Norfolk, 13 November 2012). The upperwing pattern of adult Black-headed Gull contrasts considerably with Little Gull, with a broad, white wedge extending along the outer primary coverts and primaries and a neat, black trailing edge to the latter. It lacks the distinct, contrasting white trailing edge along the secondaries, as in Little Gull (Neil Bowman). 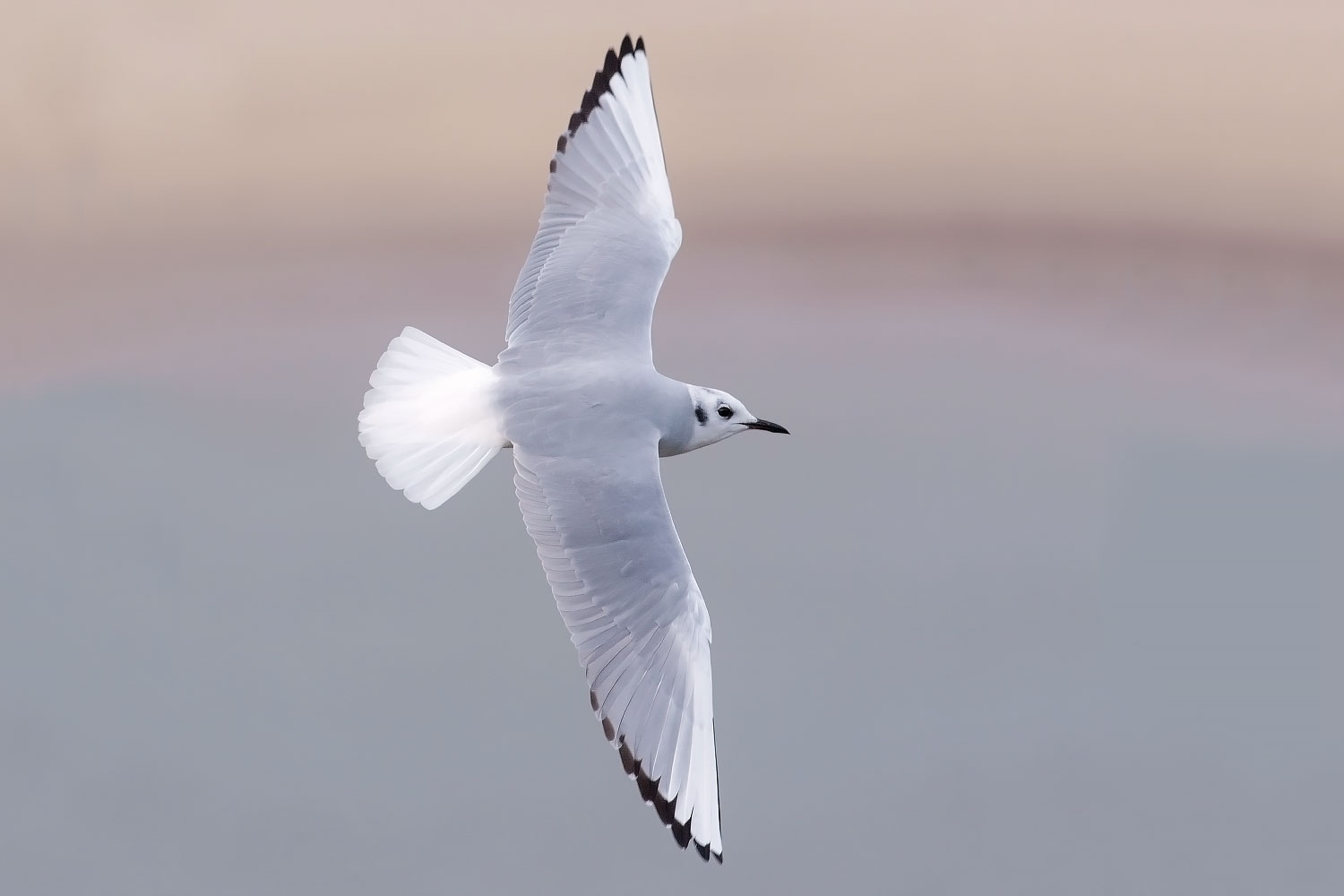 Adult winter Bonaparte's Gull (Galicia, Spain, 1 February 2015). Adult Bonaparte's Gull has an upperwing pattern superficially similar to Black-headed, rather than Little, with the white 'wedge' on the outer primaries and the black trailing edge to the primaries. However, note the black bill (Pablo Gutiérrez). 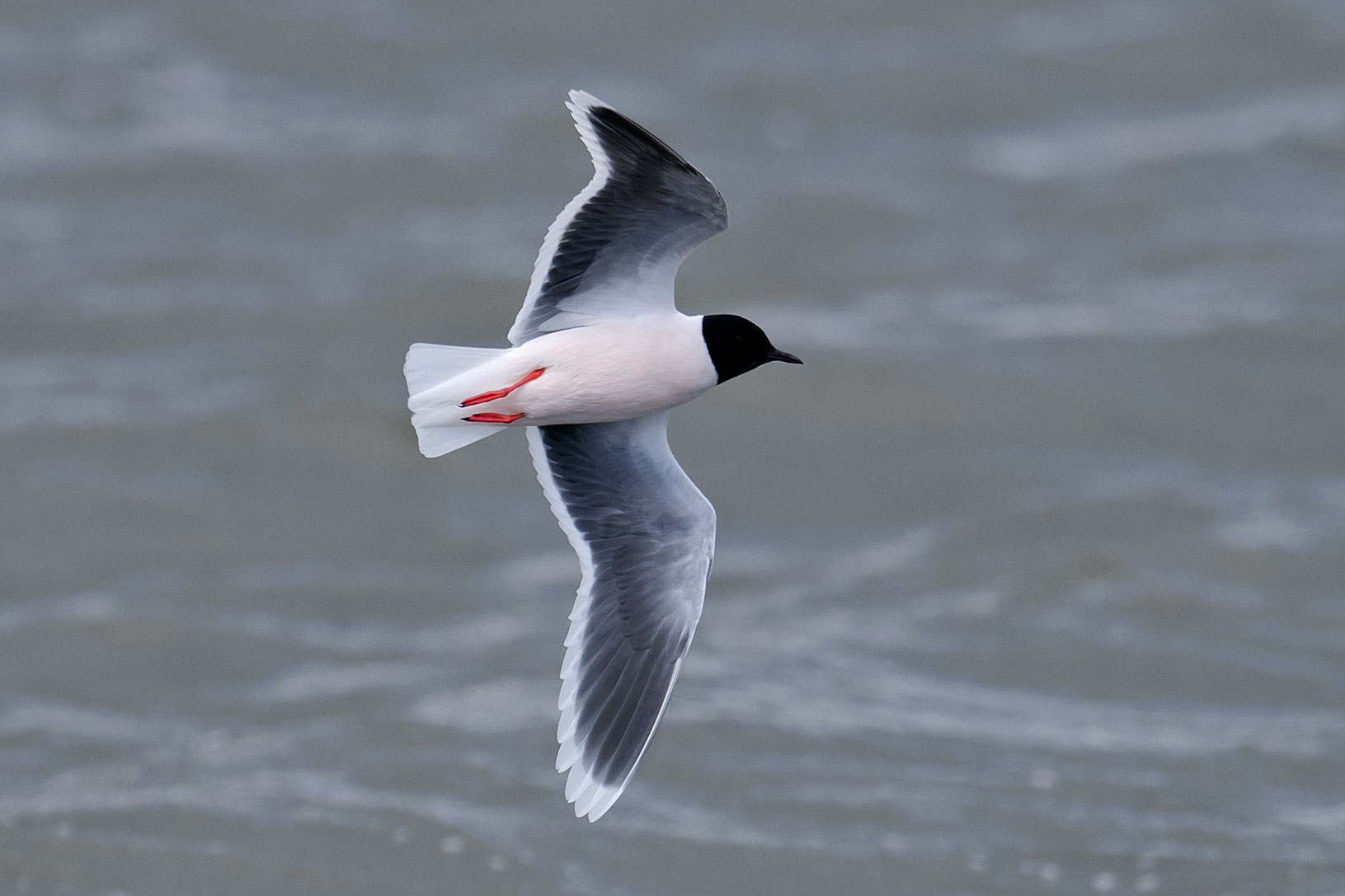 Adult summer Little Gull (Seaforth, Lancashire, 17 April 2012). If the upperwing pattern of adult Little Gull was distinctive, then the underwing pattern is even more so. Appearing dark in most lights, even when well lit, the largely dark underwing contrasts neatly with the white trailing edge. Note also the relatively broad, rounded wing shape, quite unlike Black-headed and Bonaparte's Gulls (Steve Young / www.birdsonfilm.com). 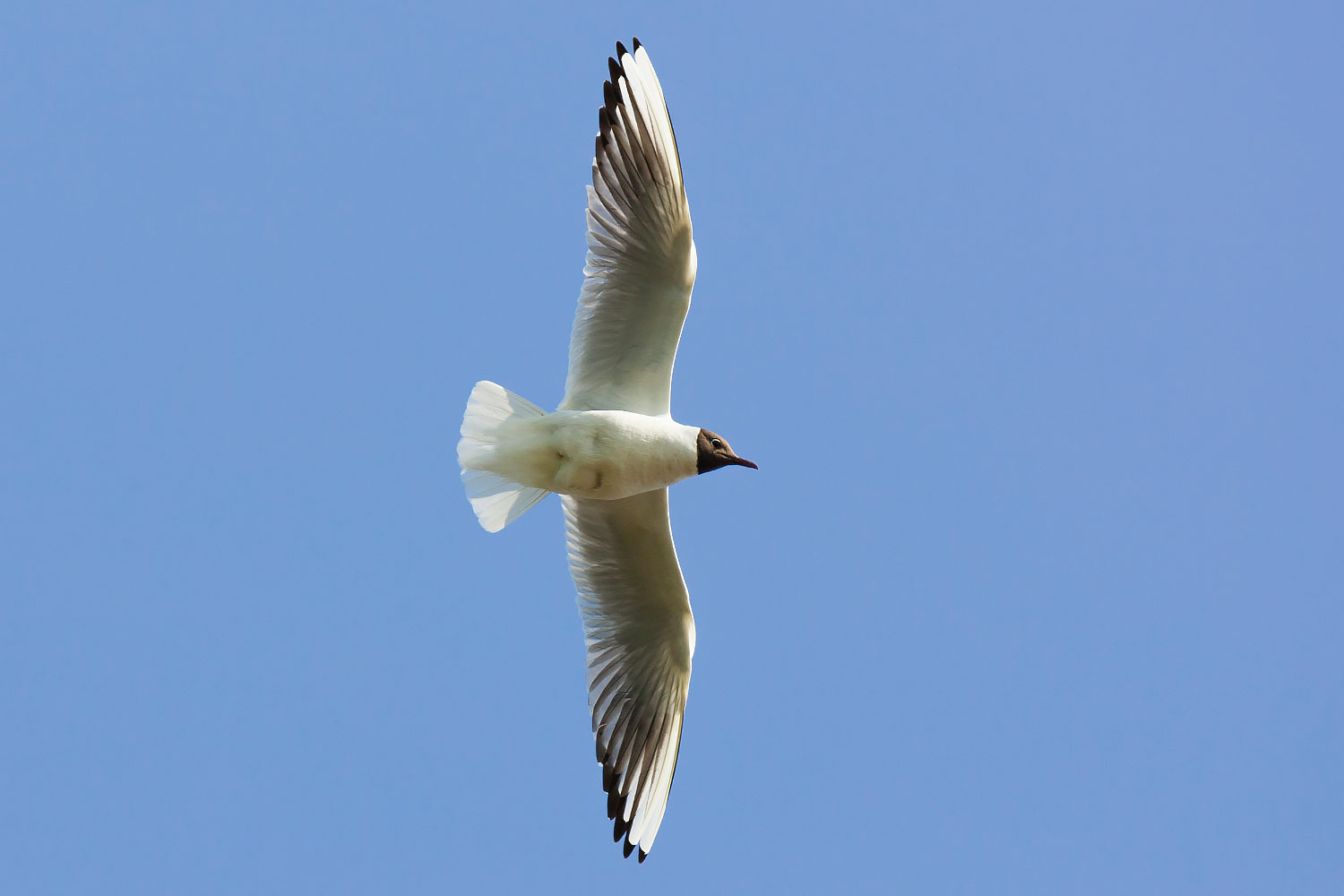 Adult summer Black-headed Gull (Oksky, Russia, 17 May 2006). Even when well-lit from above, this Black-headed Gull's underwing looks a little messy, being pale and darkening towards the inner primaries, before becoming quite white again on the outer primaries. The hood is brown, rather than black (Oliver Smart). 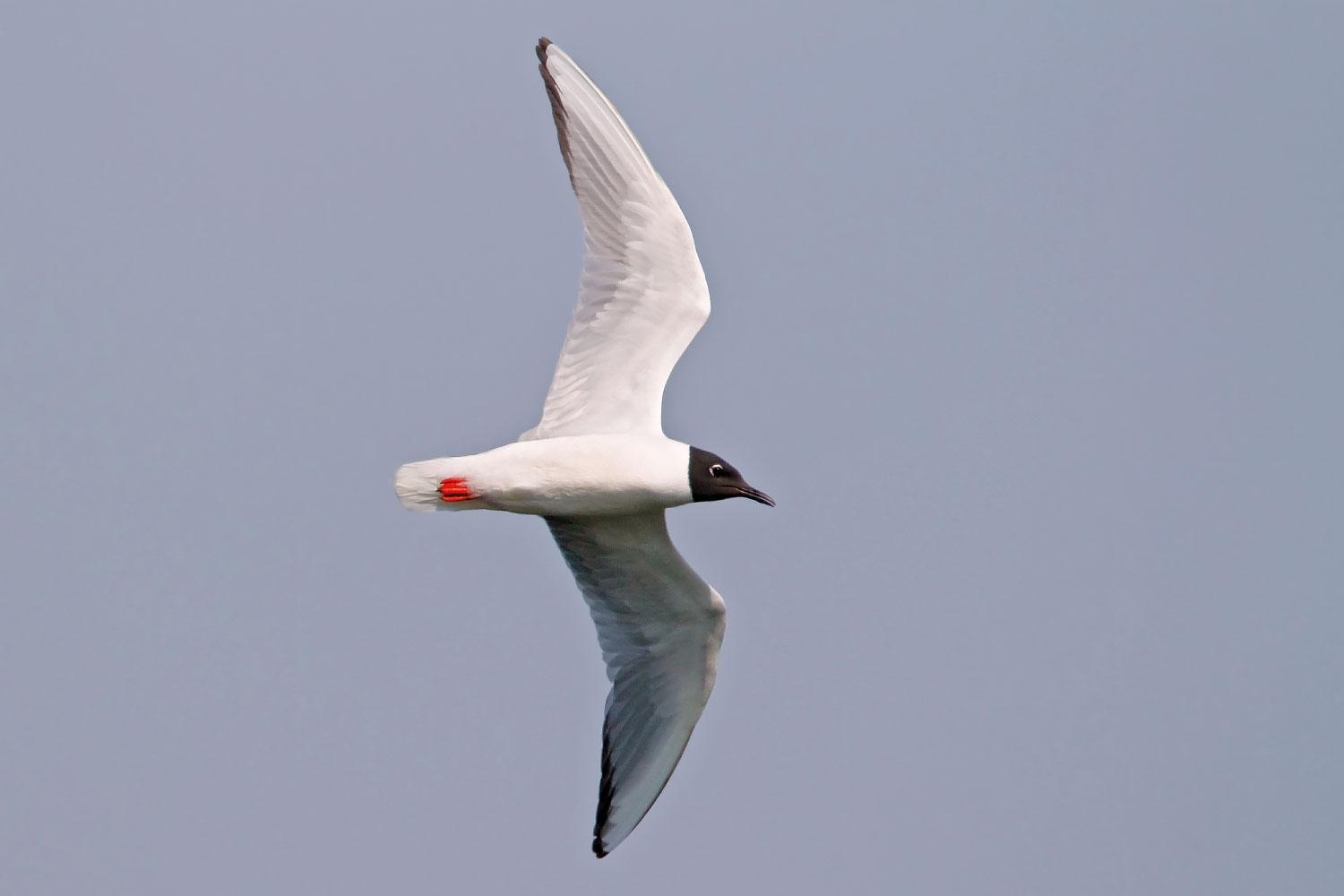 Adult summer Bonaparte's Gull (Manitoba, Canada, 14 June 2006). In total contrast to Little Gull, the underwing of adult Bonaparte's is a clean Persil white, with the faint dark trailing edge to the primaries the only exception. The hood of this summer adult is charcoal-grey, rather than black, and note the obvious white eyelids (Glenn Bartley / www.agami.nl).