During times of large-scale human conflict and crisis, it is often hard to see the wider impacts that such events have — we tend only to see the event itself. War, for example, has a devastating effect on both human and natural environments alike, but the knock-on effects of mass human migration have many unseen and unreported consequences, on both humans and wildlife.

Lesvos is the frontline of the current mass human migration from the Middle East, seeing up to 100,000 refugees a month arriving on its shores from Turkey seeking a new life in Europe. The ongoing crisis remains critical and one which politicians seem incapable of adequately addressing. The people of Lesvos have been abandoned by the European politicians in their struggle to cope with the continual arrival of refugees from Syria and other nations. The deal with Turkey to stem the flow of refugees is not at present working. And do you think the people traffickers will stop moving people for money just because there is such a deal in place?

NGOs are supporting the islanders, but a political solution, and more importantly funding, is what the besieged people of Lesvos would welcome more than anything. Those islanders helping with the crisis on a daily basis are to be nominated for the Nobel Peace Prize.

The obvious human concerns aside, the immediate environmental concerns might be very small. The north shore of Lesvos is littered with rubber and plastics from the tens of thousands of abandoned inflatable boats and life jackets, left for the locals of Lesvos to clear up — when they can. But the scale of the cleaning operation is overwhelming and very much secondary to that of dealing with the refugees themselves.

But a hidden impact of the crisis is creeping up on the island. Its one which only a small number are currently aware of, but could come to cripple the island economically and with environmental repercussions.

No matter how accurate the reporting of the refugee crisis might be, the bottom line is that the crisis may lead to the collapse of the island's tourism, and with it significant income for a significant number of the island's inhabitants. Some travel companies have pulled out of the island altogether. Others have reduced their flights or package holidays. But that aside, the simple perception that the island is on the frontline of the refugee crisis means that people do not want to go there. Despite 98 per cent of the island being unaffected by the crisis, seeing no refugees and, importantly, the island remaining completely safe, the perception that there is a problem on the island has resulted in there actually being a problem with the island. 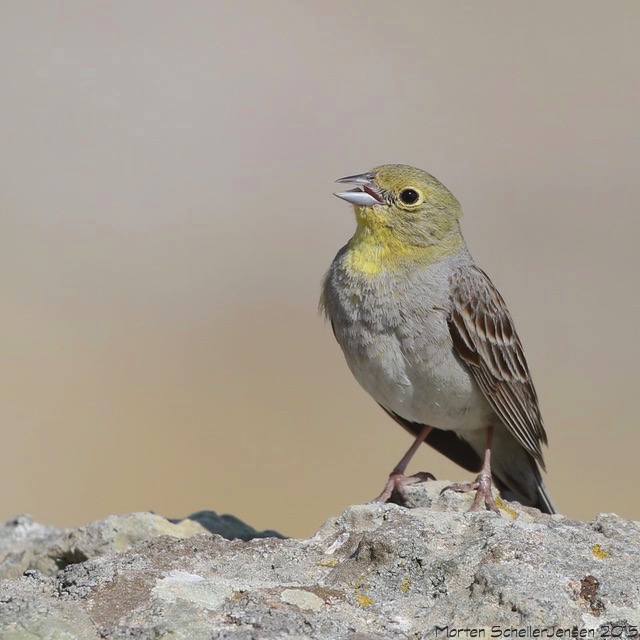 In mid-January, bookings overall for the 2016 tourist season are reported to be 70 per cent down. Lesvos has seen a gradual decline of its tourist industry in recent years linked with the Greek financial crisis and the negative image that has also created generally for many Greek holiday destinations. Coupled with a declining olive economy (the price of olives and olive-based products has plummeted and Lesvos contributes around 25 per cent of the Greek national olive industry) and the wider Greek financial crisis, the island is already struggling economically. The threat to the island's tourism industry now leaves the island on the brink of economic bankruptcy. 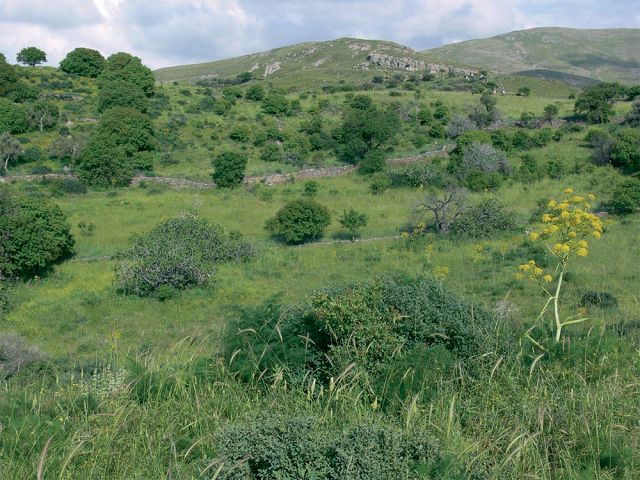 Hotelier Vasilis Vogiatzis of the Hotel Pasiphae, in Skala Kallonis, eloquently explains the refugee situation, the reality of the crisis and the impact it is having on the island's tourism in a video he posted on Facebook earlier this month.

Another hotelier, Jorgo Sakalis of the Kalloni Bay Hotel in Skala Kallonis, recently emailed a regular Lesvos visitor the following:

"To tell you the truth the real story, in brief, is better than last summer since everything has been organised by NGO teams and local authorities. So although migrants are still coming, in great numbers, they are directly transported to Mytilene where after being recorded they are taken to Pireaus. Thus you never see migrants going on foot to Mytilene or elsewhere. Everyday life has not changed for natives; on the contrary, some of them work as volunteers helping them. What really worries us is how people abroad see the current situation, so we believe people like you, who are familiar with our island and its inhabitants and have always stood by us, may inform whoever is interested about the real situation. I would like to thank you for your concern and support."

The human impact of a failing tourism industry is stark. Tourism accounts for around 30 per cent of the island's economy (probably more now since other industries have declined). Eco-tourism, centred on the spring birding weeks, is valued at over three million euros alone. The spring birding weeks are responsible for keeping some areas afloat during the Greek financial crisis. Resorts such as Skala Kallonis might have already declined if it had not been for birders' euro spend each spring. For while the main tourism across the island has been in decline, spring birding tourism has been growing through the crisis.

But that could now end. If birders don't support the island it could be the straw that breaks this camel's back, leading to the closure of hotels, tavernas and car hire companies. Many of these are small family-run businesses with nothing left in the tank. These families have already spent all their savings and investments (massively reduced due to the Greek crisis) on keeping their businesses and families afloat during these crisis years. 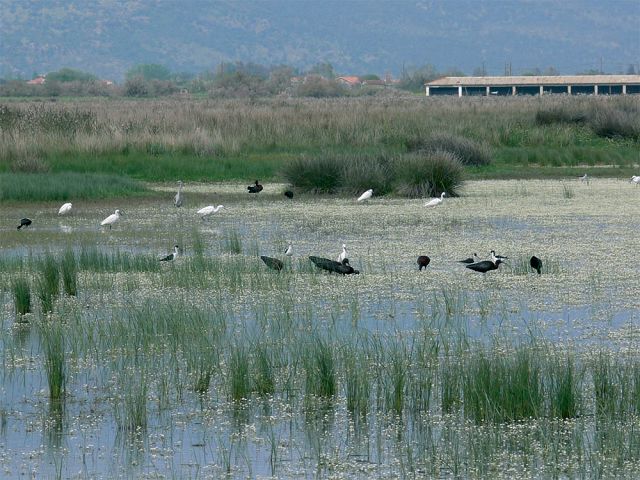 Alykes seasonal wetlands are a magnet for migrating wetland birds and have benefitted from no shooting — something which took years to achieve (Photo: Steve Dudley)

With tourism increasingly important to the island's economy, the loss of this income stream, or a significant part of it, will destabilise the island as a whole and the island's ability to continue to respond so positively to the continual arrival of refugees.

But what of the environmental impacts? These will come if the tourist economy fails. If the birders stop going, travel companies will stop their flights and holidays to cater for them. Hotels will close. Villages and villagers dependant on our spend will decline and maybe shut up shop all together. Then the infrastructure we rely on to holiday on the island has gone, and with it the ongoing environmental improvements we've been working on for over a decade.

The island's tourism is based on the its beauty, natural landscapes, seclusion and wildlife. The islanders are proud of their beautiful island. But if that beauty is not paying its way and keeping tourists coming, then we will see an erosion of pride and a degradation of the countryside, more dumping in the rivers, more shooting — all areas we have been able to improve on over the last decade using the eco-tourism argument.

The reality is that you can holiday on Lesvos without ever seeing or coming into contact with anything to do with the refugees — even when up to 100,000 are arriving along one of the island's shorelines. The island remains as beautiful and as safe as it ever was. And by visiting Lesvos you will be contributing positively to both the island economy and to the refugee crisis. 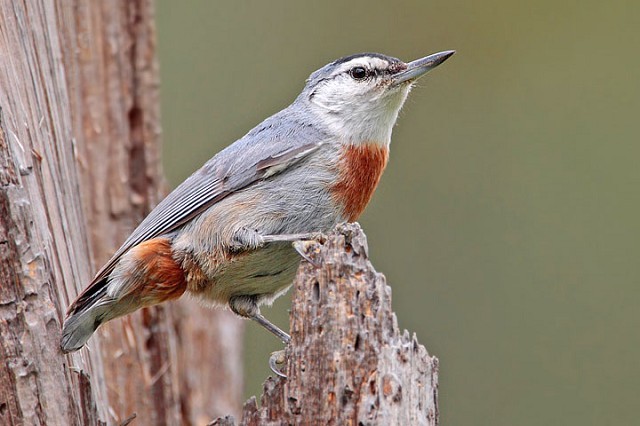 Lesvos is one of the best places in Europe to see Krüper's Nuthatch (Photo: Kit Day)

If you are struggling to find a charter package or flight to holiday on Lesvos this year, then look for flights via Athens (most major European airports fly to Athens) and book your hotel direct with the hotel of your choice. All the hotels are easily found the web.

So please, visit Lesvos. Have a great holiday. And tell your friends.

If you would like to actively help the refugees and support those islanders supporting them, then this is a useful website: How to Help Refugees.

Thank you for supporting the people of Lesvos.