In early April 2008 the coastal strip of Norfolk and Suffolk had become a Black Kite hotspot; and with good numbers in The Netherlands at the same time it was hoped that an influx of wild birds had continued on across the North Sea. However the dark cloud of ‘possible escape origin’ hung heavily over them with the news that, following damage to the Snowdon Aviary at London Zoo, first one and then a further three Black Kites had recently escaped… Some of the East Anglian Kites seemed to be posing identification problems as, on more than one occasion, individuals were being reported as either Red or Black Kite. As photographs began to appear it was clear that some birds were structurally odd and some were extremely rufous – and some were both! The hybrid possibility was coming into play now as well.

After reports that a Black Kite had been visiting Aldeby landfill site in Norfolk for a couple of days, Robert Wilton and myself decided to sit by this exotic location on April 26th in the hope that it might return again. Little did we know how good the day would prove to be for kite-watching, or where subsequent web-browsing would lead.

Soon after arrival a kite appeared overhead, and what an odd individual it proved to be. The closed tail was shallowly forked, and the underbody was a rather pale buffish-brown, contrasting noticeably with the bright chestnut-red underwing lesser coverts. The underside primary panel on each was strikingly white, as was the head. 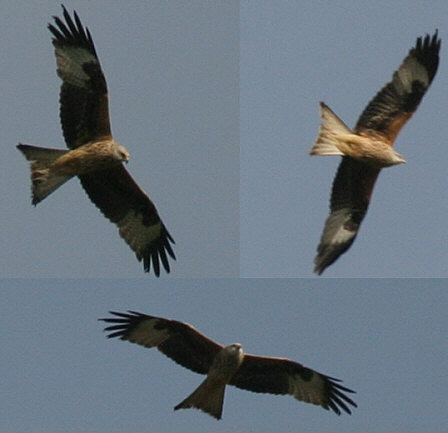 From below it looked very reminiscent of a pale immature Red Kite, but with a rather shallowly forked tail. However on the upperside the tail was a dull brown, concolorous with the rest of the upperparts and lacking any rufous or cinnamon tones. When the tail was spread a shallow fork was still obvious. With such mixed characters it was clearly a hybrid, and with fraying to the tail tip and several broken primaries on one wingtip it seemed possible it may have been one of the escaped "Black" Kites. It was last seen drifting off northwards, eating a scrap from the dump on the wing - like a giant Hobby.

We waited to see if it came back and sometime later a kite was indeed spotted dropping in from a height escorted by crows. As it came closer we could see that the upperparts and tail were dark, but the head was nowhere near as pale as the earlier individual and when we got a clear view of the underside, the primary bases were not bright white either. It was obviously a different bird, and this one appeared to be a classical Black Kite, having the shallow tail fork and six-fingered hand typical of this species (the earlier hybrid exhibited the five fingers more typical of Red Kite). It circled very low over the tip a few times, but did not pause to feed, and then carried on southwards across the Waveney valley into Suffolk and was eventually lost to view. 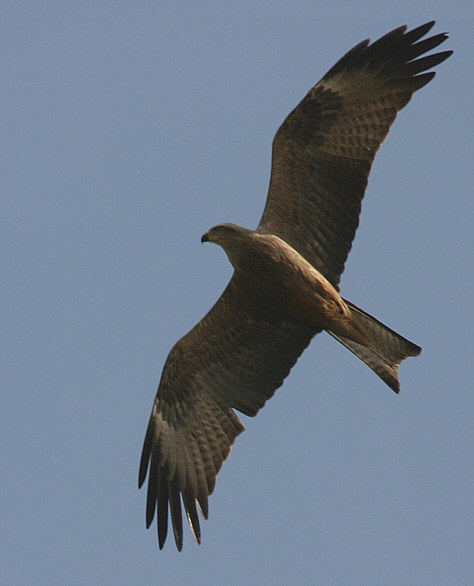 Richard Smith had arrived just in time to watch it floating over the marshes of the Waveney valley, and had himself earlier seen a Black Kite, possibly this same bird, farther east up the river at Oulton Marshes.

We waited a few more minutes but soon decided we couldn't expect to get much better views and set off towards home. Within minutes we received a call from Richard, who had set off shortly before, informing us that a Black Kite had just flown across the road in front of him at Herringfleet. This was en route anyway so we were soon there to find him watching the Black Kite and two Red Kites in the air together in the distance. The three birds then separated and the Black Kite drifted off eastwards.

James Brown then phoned to say it was loitering over the pines at Ashby, east of Herringfleet. Needless to say we headed there next to find it showing well at close range. It soon became apparent that amazingly this was yet another individual, and from the damage to the left wingtip and the distinctive white patches on the scapulars it was the same individual photographed at Boyton in southeast Suffolk on April 9th. A bird with the same features had also been seen at Horsey in east Norfolk on April 12th.

As well as the damage to the left wingtip already noted, the tip of the tail was slightly frayed, much as in the first bird of the day. This bird also only exhibited a five-fingered hand rather than the six fingers more typical of Black Kite. 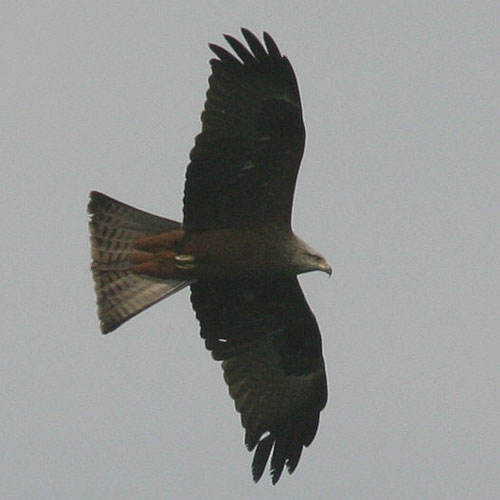 Five kites in a day was certainly a lot more than we had expected at the start. Two Red, one Black, one Black(ish) and a hybrid - all wonderful birds to watch regardless of their origins.

That evening I decided as a matter of personal interest to search the web to see what images of hybrid Red and Black Kites I could find to see how variable they were. Not surprisingly Cape Verde (Red) Kite Milvus milvus fasciicauda popped up in the results. I had heard of this island race of Red Kite before, and knew that many considered it to be the result of hybridization between Red and Black Kites that had made it to these islands - the southwesternmost outpost of the Western Palearctic - around 500 km west of Senegal.

It was on the website of the Peregrine Fund, an American raptor conservation organization, that I discovered some very intriguing information:

In June 2002 five putative Cape Verde Kites were captured on Maio Island in the Cape Verdes, and in September of that year were brought to the National Birds of Prey Centre in Gloucestershire. The intention was, in collaboration with the Peregrine Fund, to start a captive breeding programme to try and prevent increasing hybridisation with Black Kites from wiping out what some people considered potentially a species in its own right. The Peregrine Fund website notes that "once in the hand, the kites were found to share characteristics of both Red Kites and Black Kites with substantial variation between individuals. It was clear from plumage and morphological measurements that none of the kites captured could be reliably identified as either Cape Verde or Black Kites."

Mitochondrial DNA analysis subsequently confirmed them to be either Black Kites or hybrids with maternal Black Kite ancestry. Given the substantial individual variation and mixed species characteristics, all were clearly hybrids, and probably of varying generations, as such hybrids between Red and Black Kites are fertile and are known to have themselves then bred to produce further generations of hybrids.

The same study, published in The Proceedings of the Royal Society B: Biological Sciences (2005) entitled Prioritizing species conservation: does the Cape Verde Kite exist? carried out similar mitochondrial DNA analysis of the original specimens from which the Cape Verde Kite was described, which proved them to have a Red Kite ancestry and not to be sufficiently distinct to be elevated to species status. As such the captive breeding program was terminated in 2005.

It was interesting enough to discover that five highly variable hybrid kites from the Cape Verde Islands had been in captivity in the UK since 2002, but once the breeding programme was ended, could they have been deemed surplus to requirements and rehomed at London Zoo to escape from there 6 years later?

An email to the National Birds of Prey Centre elicited the news that a pair had been kept at the Centre (though to date they have not bred) and that in 2005 the remaining three birds, a male and two females, were donated to London Zoo, as Black Kites based on the DNA results. That these birds then escaped the Zoo shortly before the sightings in East Anglia completed the extraordinary puzzle!

However, confirming the existence of escaped hybrid Cape Verde × Black Kites in the UK was the relatively easy bit; working out which they are amongst the abundance of records of Black Kites in East Anglia, and potentially elsewhere, will be a somewhat trickier task for various records committees.

Furthermore, the fourth bird that escaped from London Zoo was reportedly an eastern-race bird, i.e. Black-eared Kite Milvus migrans lineatus. Is it just a coincidence that a Black-eared Kite has also been abroad in Norfolk since April?

If these birds should settle down to breed with Red Kites in the UK, we could be in for a lot more curious-looking Kites to come.

Thanks are due to Keith Beaven, Director of the the National Birds of Prey Centre, for confirming the provenance of three of the London Zoo birds.
Written by: Andrew Easton