Perhaps surprisingly, close birds can present problems, too. Structural and behavioural features can be harder to evaluate, and although plumage characters can now be seen, these are complex and highly variable, ranging from very pale and strongly contrasting to almost uniformly dark. 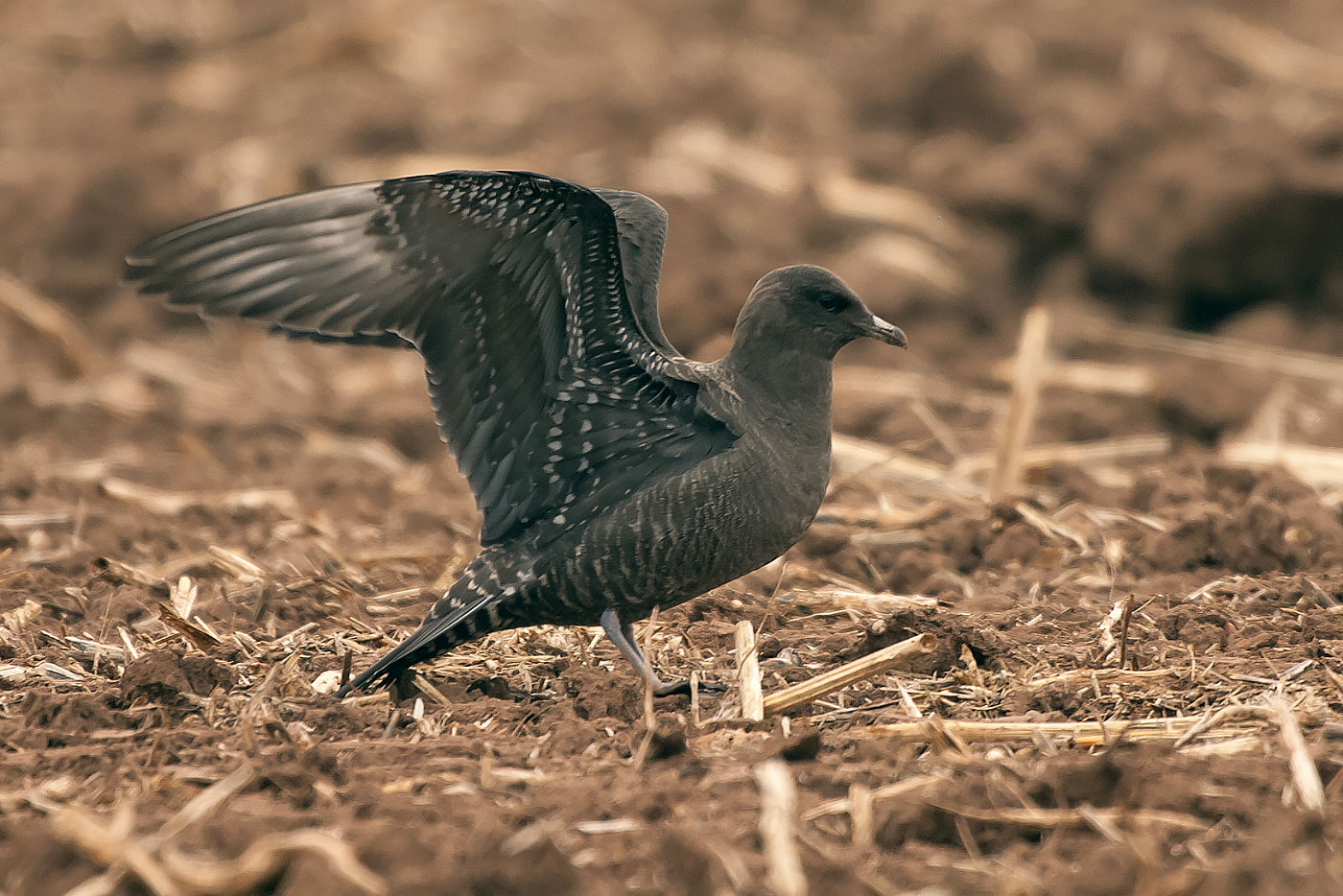 Juvenile Long-tailed Skua (Nottingham, Nottinghamshire, 22 September 2007). Though usually seen briefly at sea, very occasionally skuas can be seen at close quarters on land. On such occasions it is possible to appreciate not just structural and general plumage features but also real feather detail. Any small inland skua has a high chance of being a Long-tailed Skua, and this is the case here. Note the relatively slight build, albeit with a prominent chest, the small, evenly rounded head and the relatively short bill, all classic structural features of Long-tailed Skua. Although this is a fairly dark individual, further confirmation of its identity can be found in its plumage with the characteristic 'cold' grey-brown hues and neat white feather tips (Steve Young / birdsonfilm.com).

Pomarine Skuas have an almost circumpolar distribution, but are absent from Greenland, Iceland and Scandinavia. Our nearest breeders are further east, in European Russia east of the Kola Peninsula.

They are mammal predators in summer, but outside the breeding season they are true pelagic pirates, aggressively parasitising other seabirds up to the size of Northern Gannet and directly preying on others, notably Red-necked Phalarope.

The Russian breeders that pass through British waters winter off west Africa, from Senegal to the Gulf of Guinea. A few adults appear in August, but juveniles are seen around Britain in mid to late autumn, and at this time North Sea coasts are best. In years of high breeding success or periods of strong onshore winds there may be large influxes on the east coast in late October or November.

Pomarine Skua at range appears somewhat 'heavier' than Arctic, an impression created by a broad body, rather rotund belly and broad innerwings. Feeding is done with a direct attack rather than a prolonged aerial chase.

The migration flight action is more steady and 'sedate' than that of Arctic, perhaps reminiscent of a large gull, though it will 'shear' downwind in the same way.

When seen close, the plumage of young birds is always 'cold' looking, with grey hues predominating. Paler birds will show a pale area in the uppertail coverts, but the nape is usually dark. Extensive pale is usually visible in the underwing, however, and often a 'double underwing flash' may be seen.

This species has a circumpolar distribution, breeding on coastal tundra and moorland, where it aggressively parasitises other seabirds, including auks, Arctic Terns and Kittiwakes. Arctic Skuas from Europe winter in the South Atlantic, mostly off south-west Africa and south-east South America.

Arctic Skua can be readily seen off British coasts from mid-July through to October, though peak numbers move through in August and September. Adults come first, with juveniles appearing after mid-August. Although there is some evidence of a high overland passage, Arctic Skuas are rarely seen inland.

This is the default skua, particularly in early autumn, and familiarity with its appearance at range is the essential starting point. It is a 'well-balanced' species, neither particularly bulky nor slender, and it is always a confident, often aggressive, flyer.

Feeding birds may sit on the sea and rise to attack other seabirds with long, twisting pursuits, and any skua persistently adopting this strategy will be an Arctic. In active migration flight, Arctic Skua moves rapidly downwind on stiff wings in a very shearwater-like fashion. It is also capable of moving purposefully into even a very strong headwind.

Although juveniles are very variable (ranging from strikingly pale – with contrasting pale napes, uppertail coverts, underwings and underparts – to very dark), most are warmly coloured, and show sandy or rusty fringes to the flight feathers.

This skua, too, has an Arctic circumpolar distribution, the nearest breeders to Britain being in Scandinavia. On the tundra mating grounds, it is a mammal predator, its success being closely tied to lemming population cycles. Outside the breeding season it is highly pelagic, with European breeders wintering mainly in the South Atlantic where the birds feed on squid and lanternfish. In autumn it may be seen off all coasts, particularly those facing the North Sea.

Treated until the 1980s as a national rarity, Long-tailed Skua is now more familiar. Better knowledge of its identification, more accurate optics and improving observer competence have shown it to be regular though still very scarce. It is, however, always greatly outnumbered by Arctic Skua, and remains a challenge to find and correctly identify.

The first adults are seen in late July, followed in August by the first juveniles. Most pass in September, and by October the species is rare. However, the numbers seen in Britain vary considerably from year to year, according to the timing and extent of weather events and that year's breeding success.

Long-tailed Skua is very rare inland but, perhaps surprisingly, is more likely to be encountered here than Arctic. Tame and apparently 'lost' skuas on inland fields, for example, usually turn out to be Long-taileds.

Compared with Arctic, this species is slim bodied, albeit with a quite prominent breast, and has a long, narrow rear body. The wings are long, slender and slim based, giving a rather 'frail' apearance and a very light, 'airy', tern-like flight action.

Feeding is generally done by 'dip-feeding', with birds performing a characteristic 'stall' to drop to the surface. It will chase other seabirds, but rarely with much conviction or persistence.

Downwind flight resembles that of the other skuas, but it has some difficulty in a strong headwind, advancing only slowly and keeping very low in wave troughs.

Juvenile plumage ranges from strikingly pale and ghostly to almost black but, as in Pomarine Skua, it is always 'cold' with grey hues predominating. At range, paler birds show light markings on the uppertail coverts (giving the tail a rather 'stuck-on' appearance), and pale hues on the nape, underwings and often the belly, contrasting with a darker breast. The upperwing flash is generally narrow and usually invisible at any distance. 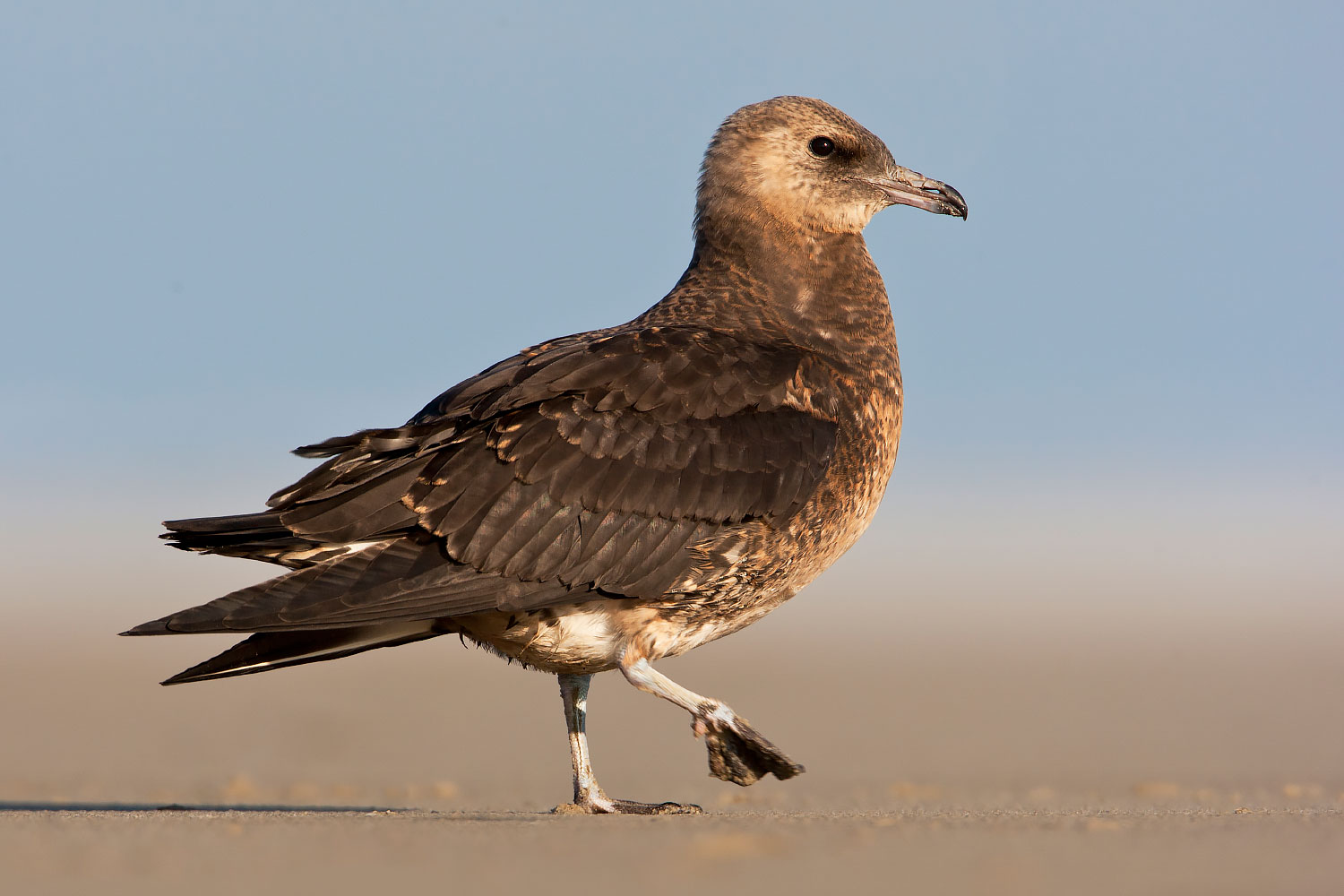 Juvenile Pomarine Skua (Terschelling, The Netherlands, 22 October 2011). This young Pomarine Skua really catches the eye with its heavy, ponderous structure comprising a large rotund body, large heavy head and neck, stout bill and short legs. The head and bill structure are curiously reminiscent of Glaucous Gull, an impression heightened by the characteristic 'two-tone' bill with its pale base and well-defined dark tip. Though the belly is extensively pale (and the pale undertail coverts can just be seen too), the nape is typically concolorous with the upperparts and the primaries are all dark, lacking pale tips (Arie Ouwerkerk / www.agami.nl). 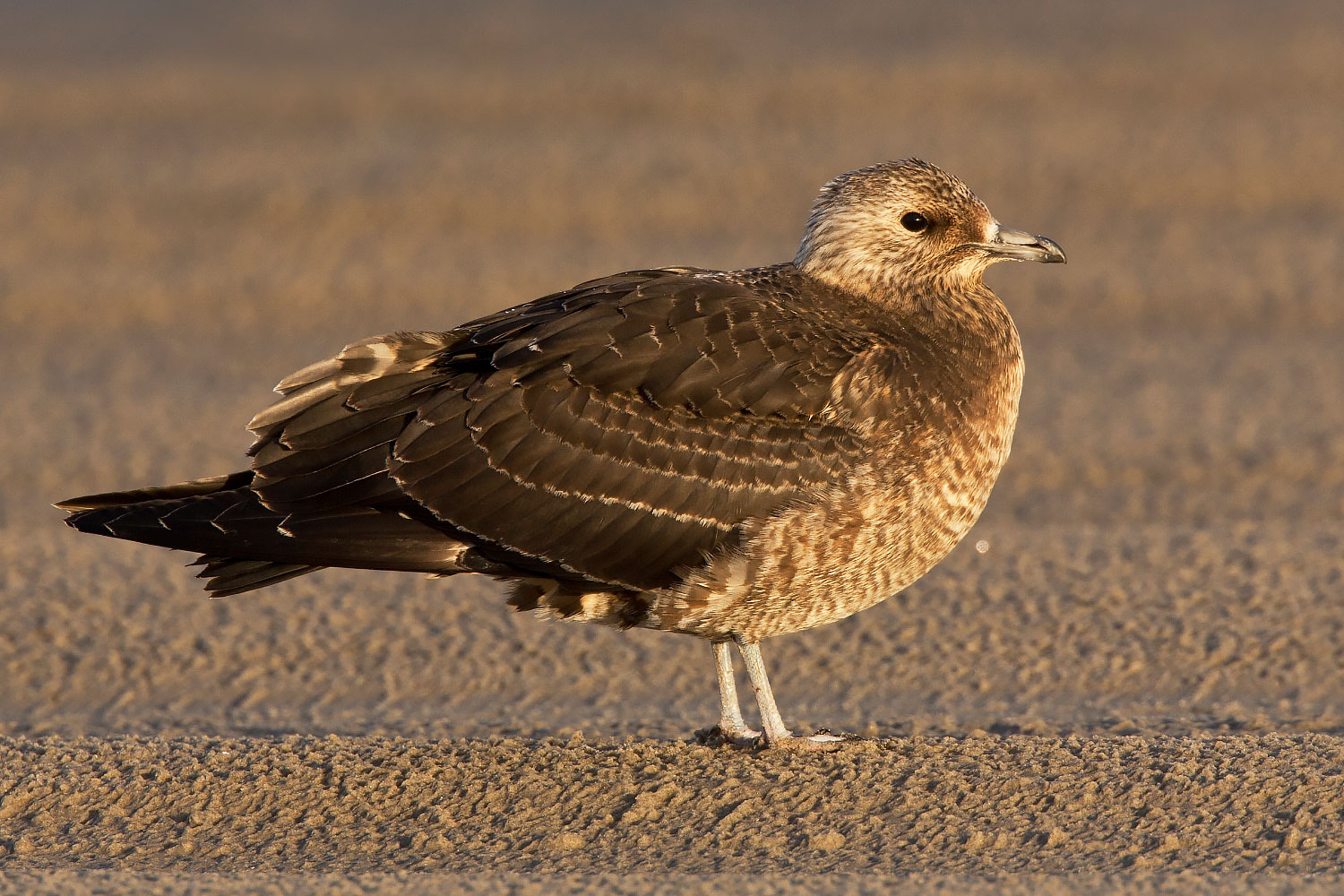 Juvenile Arctic Skua (Terschelling, The Netherlands, 18 November 2005). Though looking rather 'heavy', this bird is much smaller headed than the Pomarine Skua above. The bill is more slender too, quite long and lacking the obvious pale base and dark tip of its larger cousin. These are classic features of Arctic Skua. Turning to plumage, the strongly contrasting pale nape also points away from Pomarine Skua but is typical of Arctic. Further confirmation is provided by the rather warm hues in the body plumage and also by the narrow pale chevron-shaped tips to the primaries (Arie Ouwerkerk / www.agami.nl). 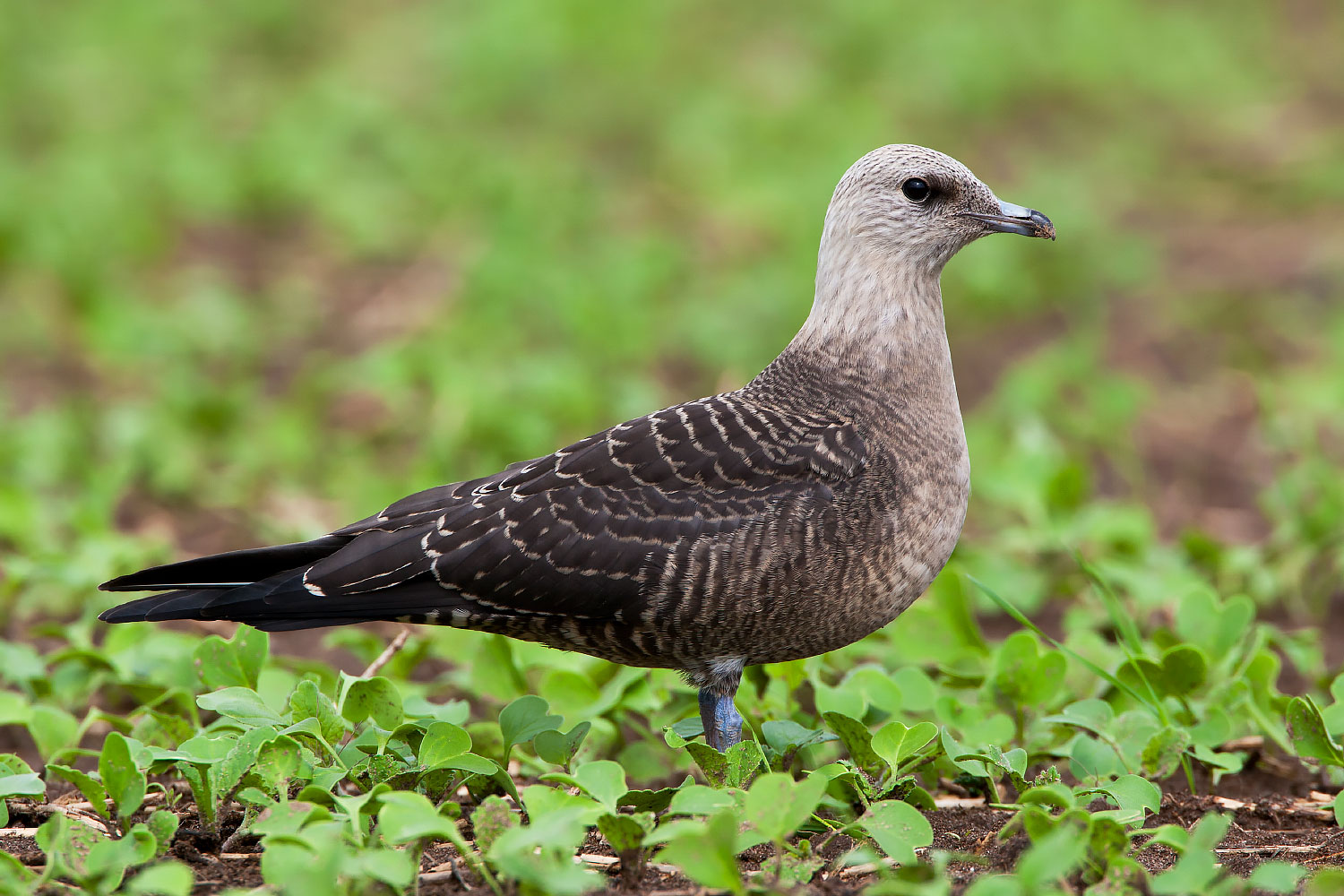 Juvenile Long-tailed Skua (Elten, Germany, 10 September 2007). The inland setting is an instant clue that this might be a Long-tailed Skua, and this is indeed the case. Note the striking and typical structure comprising a short bill, softly rounded small head, prominent chest and long slim body. Though this bird is paler than that in the opening image (and actually more typical), note the 'cold' greyish plumage hues and neat pale feather tipping, particularly in the mantle, scapulars and wing coverts. Unlike juvenile Arctic Skua, the primaries are wholly dark with no pale chevron-shaped tips (Arie Ouwerkerk / www.agami.nl). 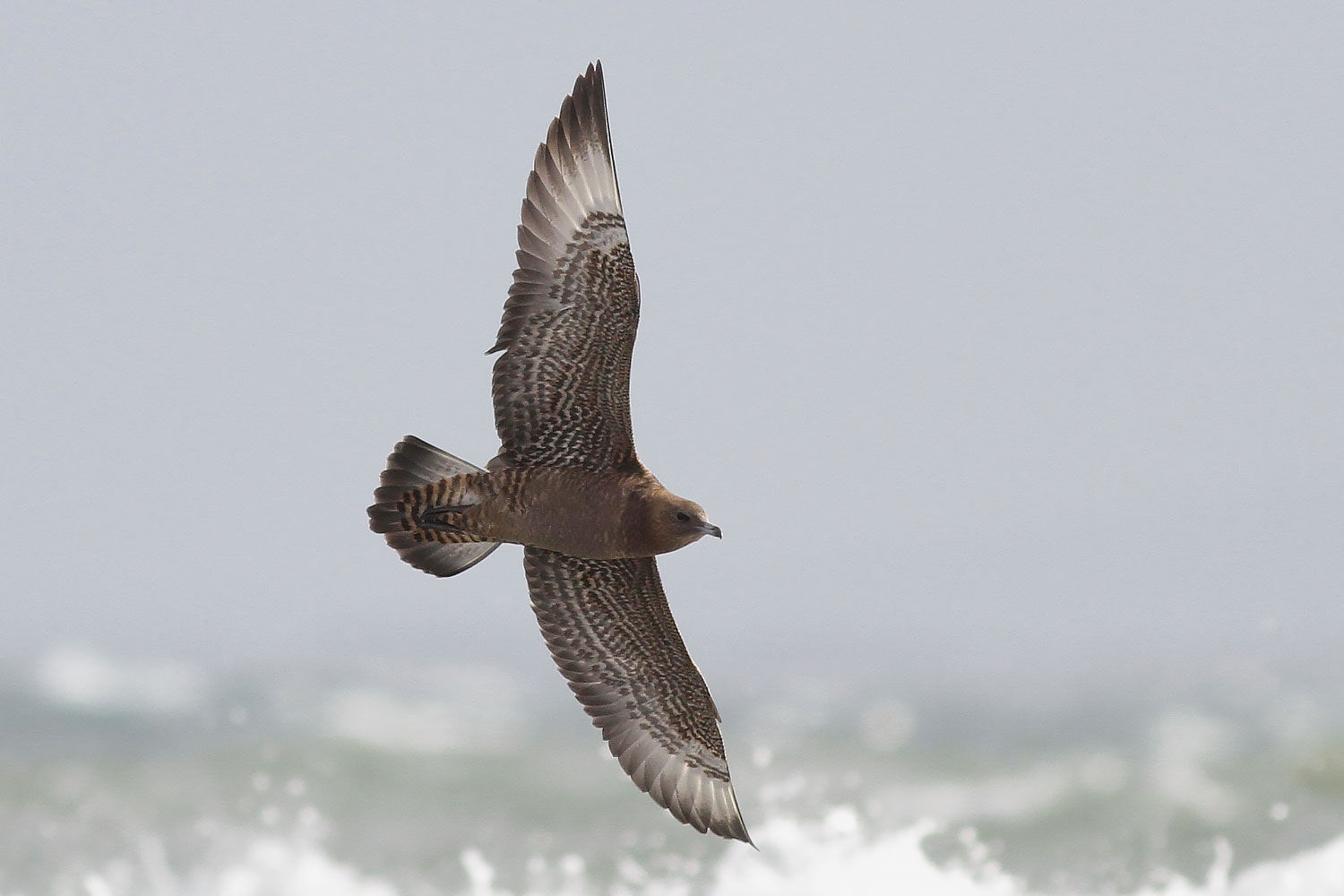 Juvenile Pomarine Skua (pelagic off Galway Bay, Co Galway, 18 October 2014). This lovely action shot captures the character of juvenile Pomarine Skua perfectly: heavy bodied with a solid-looking head and very broad wings, particularly basally. The bill even looks heavy, too. Also visible is the shape of the central tail feathers, projecting only slightly beyond the rest of the tail and appearing quite broad and blunt tipped. There is extensive pale in the underwings and undertail coverts, but note again the dark nape. Another common feature well shown here is the double underwing flash caused by pale bases to both the primaries and the primary coverts (Dermot Breen). 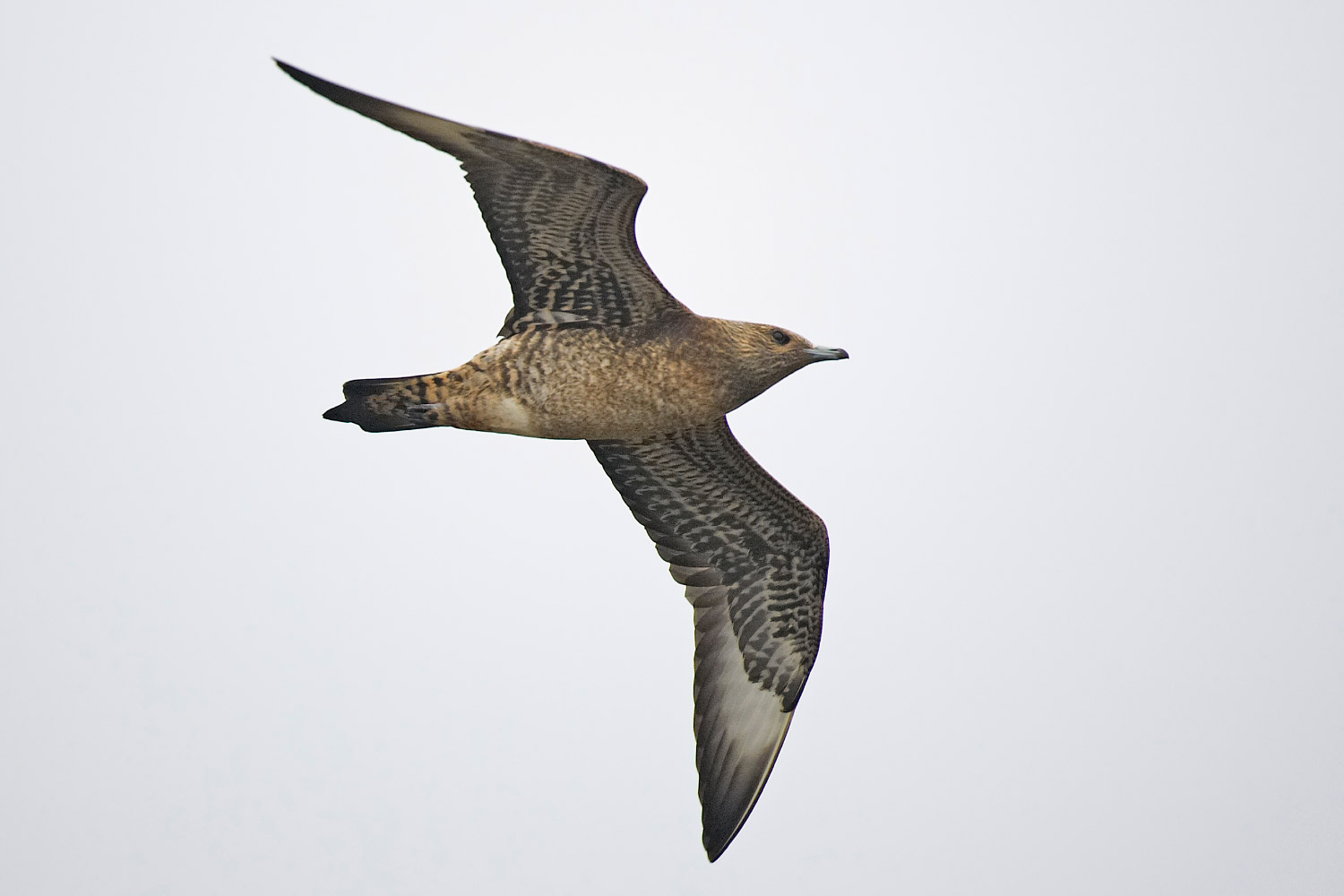 Juvenile Arctic Skua (Falsterbo, Sweden, 27 September 2005). This young skua is more evenly proportioned and slimmer bodied than the bird above. It has a longer neck, a smaller, narrower-looking head and a longish, slender bill. These are all typical features of Arctic Skua. Note also that the central tail feathers, projecting beyond the rest of the tail, are quite sharply pointed. The 'warm', almost rusty hues to the plumage are also characteristic of Arctic Skua (Markus Varesvuo / www.birdphoto.fi). 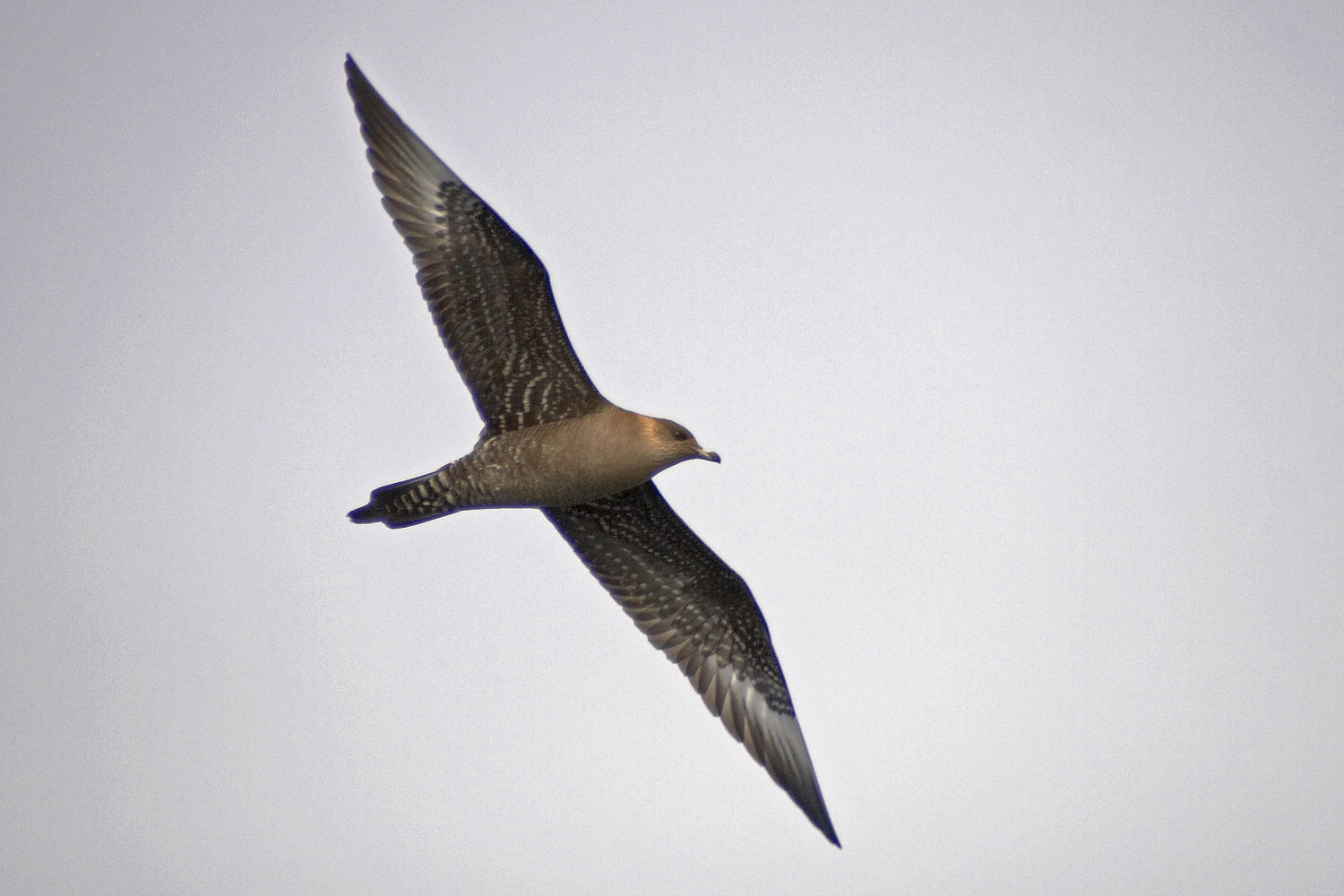 Juvenile Long-tailed Skua (pelagic off Scilly, 3 September 2004). Though superficially similar to the Arctic above, this juvenile skua looks a little shorter billed, rounder headed and shorter necked. Its breast is prominent, but the rear body and tail are long and slim. Note, too, the central tail feathers, which project strongly from the tail and are obviously thick and blunt tipped. This is a classic young Long-tailed Skua, an identification that can also be confirmed by its dark grey-brown and white plumage which lacks any obvious 'warm' or rusty hues. Note also that, in comparison with the preceding Arctic Skua, the undertail covert barring is strikingly strong and regular (Ben Lascelles). 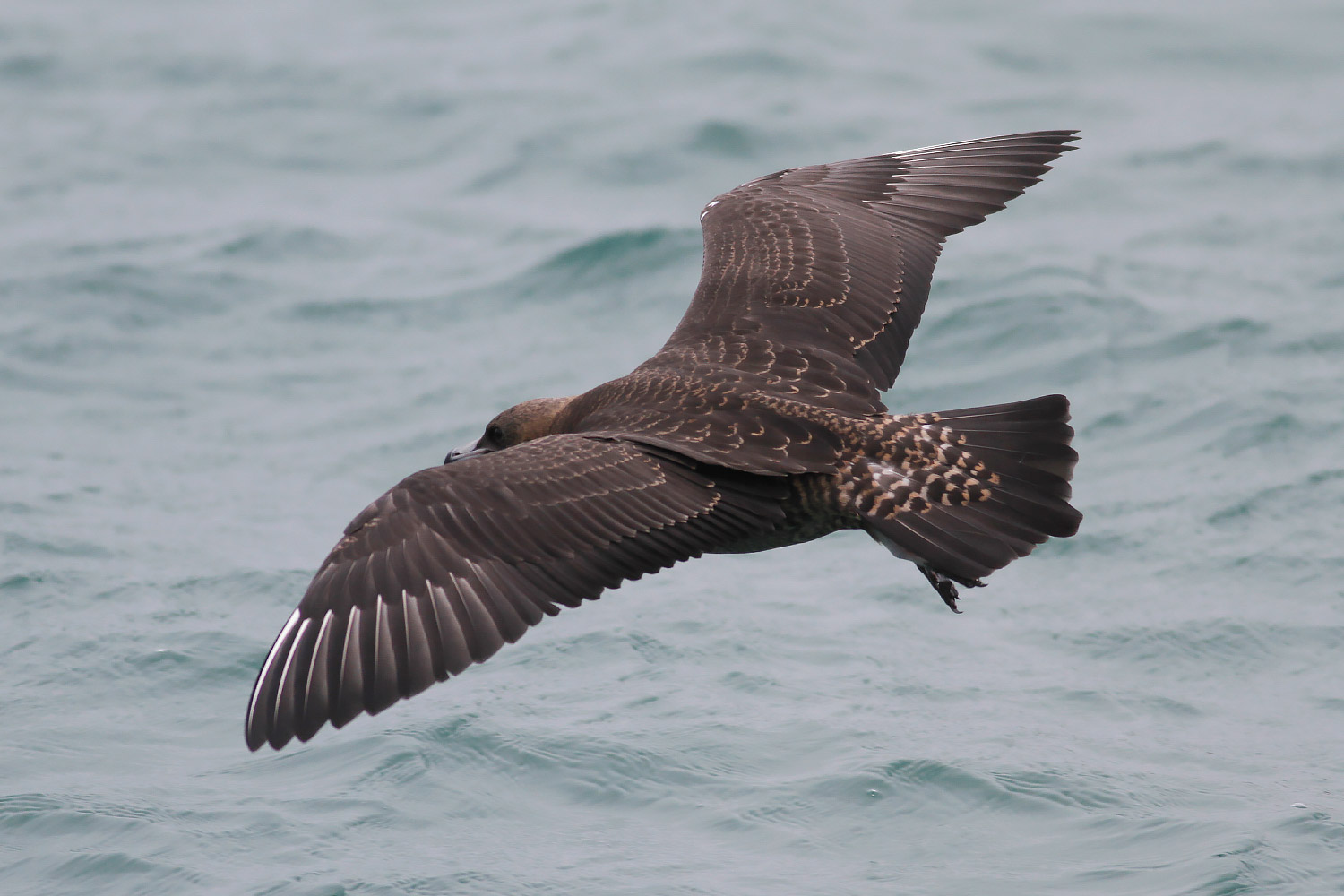 Juvenile Pomarine Skua (pelagic off Scilly, October 2011). This bird looks large and solid with very broad wings. The bill can just be made out and it looks heavy, while the central tail feather projection is very short and blunt. Surely this is a Pomarine Skua? This initial diagnosis can be confirmed by reference to its plumage – rather dark and 'cold' looking, lacking the rusty appearance of Arctic Skua and, most importantly, combining extensive pale barring in the uppertail coverts with a dark nape, a combination not shown by Arctic Skua (Joe Pender). 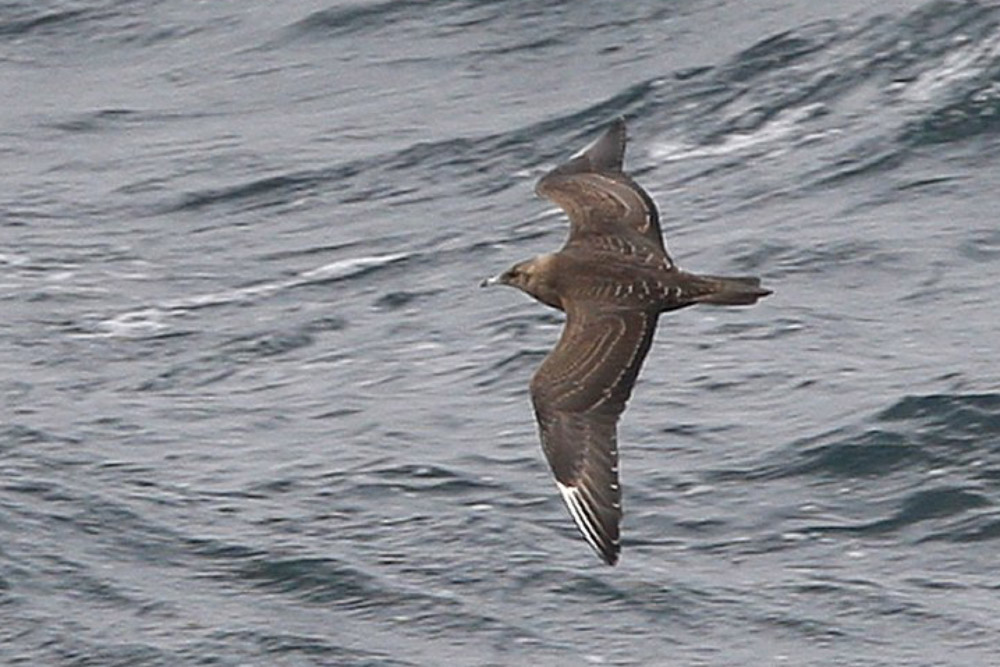 Juvenile Arctic Skua (Bridges of Ross, Co Clare, 7 September 2013). This bird lacks the heavy appearance of Pomarine Skua and is clearly one of the two smaller species. Its even proportions, with the wings centrally positioned, its narrow head, longish neck and bill and very pointed central tail feather projection all readily identify it as an Arctic Skua. This is a relatively dark individual and so presents fewer plumage clues, but there is a little 'warmth' visible in the nape and the upperwing flash is quite extensive (John N Murphy). 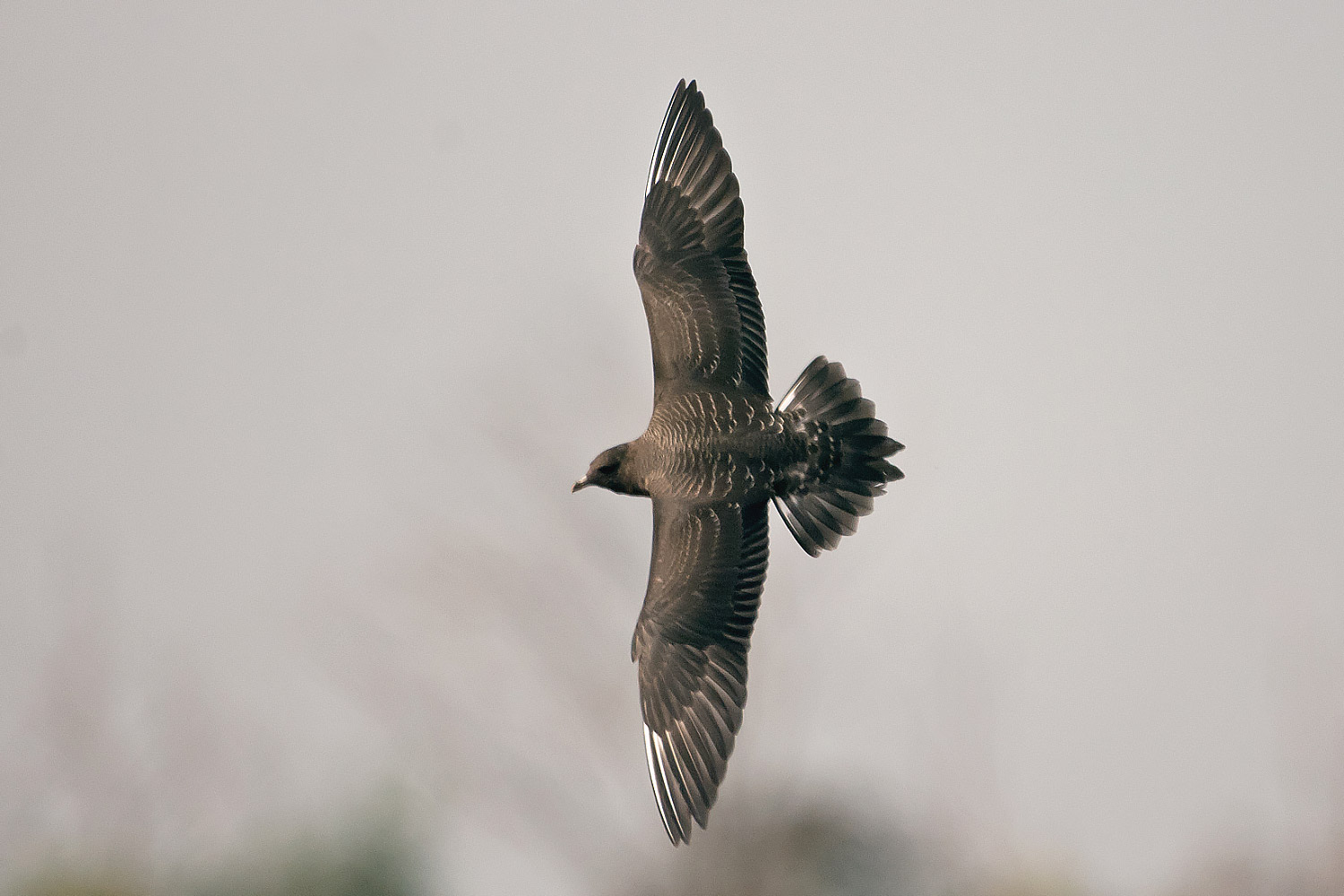