PEREGRINE Falcon and Hobby are large, moustachioed falcons which breed in Britain. Both are becoming more common and are likely to be seen in June, where distance, poor views and glaring sunlight can help confuse the identification of these similar species.

Peregrine is the larger and more widespread of the two, averaging at least 3 cm longer in length. It has a chest-heavy, short-tailed structure with broad-based wings that give the bird a characteristic anchor shape from underneath in flight.

Adults’ underparts are tightly barred with black, while the slate grey upperparts fade to a paler tail base and lower rump. The head is mostly black, but the species has a wide, blunt moustache which contrasts with a shallow but obvious white lower cheek. Juveniles are browner and streaked on the underparts. Overall, the impression is of a brawny but nimbly flying falcon, weighted towards its muscular front, dark on top and quite pale underneath.

Hobby is a darker and more rakish affair, with blue-tinged slaty upperparts and black-streaked underparts which have a subtle buffy tinge to their ground colour. The tail and rump are fairly concolorous with the back. This falcon appears slender, elegant and almost swift-like in aspect, with long, curved, scimitar-like wings and a proportionately longer tail than Peregrine, but not as long-looking as Common Kestrel or the über-rare Eleonora’s Falcon. It too has a moustache, but this is thinner than Peregrine. It has a narrow white ‘eyebrow’ and the white cheek patch has an obvious ‘comma’ of black framing the ear coverts, with a white bracket behind this reaching to eye level. In good light you can see its rich red leg feathers and vent.

Juveniles have the same markings template as adults, but are very much a sepia-toned version, as well as being subtly less streamlined looking; at this age they are often confused with Peregrine under unhelpful conditions.

The behaviour of the two species can also be useful. Peregrines tend to roost on a high vantage point, though they may rest on the ground, and make speedy circuits of their large hunting territories. They can appear out of nowhere, stooping at lightning speed from high in the sky, or may strafe pigeon and Starling gatherings, causing maximum confusion and chaos. Hobbies are dragonfly and hirundine or swift specialists, usually taking them by surprise in mid-air, and even eating them there, but they, too, may rest on the ground or a post with larger prey. 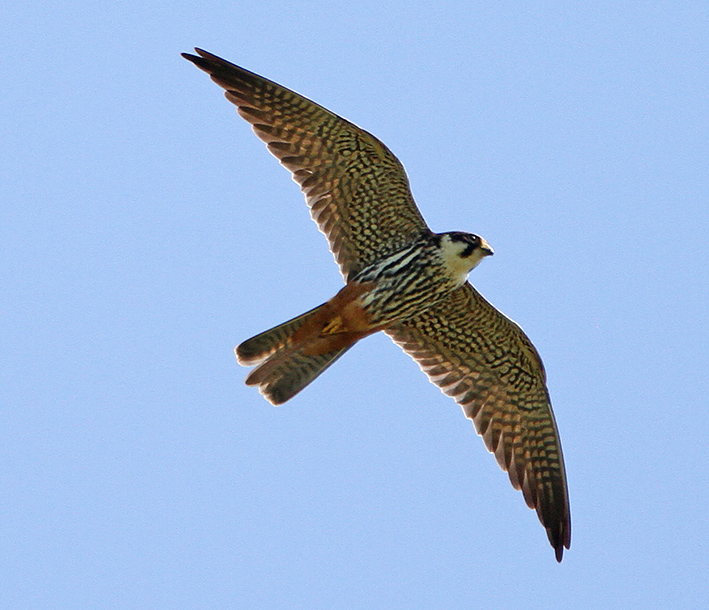