BIRDING can still throw seasonal ID conundrums into the mix even at the end of the migration period at the beginning of summer. Among these is the problem of medium-sized falcons.

The most familiar species to many will be Peregrine. This robust raptor can be identified by its proportionately thicker wing bases and relatively short tail, creating a typical ‘anchor’ shape in flight. It has a black ‘executioner’s hood’, with a small white cheek patch framed by a broad black moustachial stripe.

The upperparts are a fairly even battleship grey, with the primaries appearing a little darker than the rest of the wing and the tail looking darker due to the presence of thin dark grey tail bands. The underparts have a white ground colour, which is thickly covered with thin grey bars, which become small spots on the chest. The cere and legs are bright yellow, and females are particularly well built.

Peregrine’s stocky build does not prevent it from resembling Hobby, particularly when seen from an odd angle in flight. Hobby is a darker, richer grey on the upperparts, at times appearing almost blackish, with a purple or bluish tone. The underparts are thickly streaked with black, rather than barred as in Peregrine, and the face is also black, with a smaller more angular white cheek and a thinner ‘moustache’.

Hobby appears much longer winged and also longer tailed in flight than Peregrine, evolutionarily aping its main prey of swifts and hirundines in shape. Good views of the underside will reveal the deep red feathering of its ‘trousers’ and undertail (buffer in younger birds), though this can be surprisingly hard to see.

Slightly smaller, but overlapping in size and some features, is Red-footed Falcon, which is sexually dimorphic – that is, males and females have different plumages. This is a much rarer species than the other two, but good views should enable a reasonably quick identification. All too often, however, falcons zip past unhelpfully, and it is then that key features should be looked for quickly.

Male Red-foots shouldn’t be too hard to identify, as they have an all-grey body and wings with red legs, vent and undertail coverts. With underparts in shadow or silhouetted against the sky, however, confusion with Hobby is possible. In profile Red-foot is slightly longer tailed and shorter winged, and males also have a silvery wash to the upperside of the primaries. Female Red-footed Falcons can cause more headaches, particularly if seen badly, being a Hobby-like dark grey in colour on the upperparts. Again the underside can be a problem if not seen clearly, but this species has essentially unmarked ginger underparts, with the buffish crown making for a pale-headed appearance. The white cheek patches link with a white throat, and the lack of much of a ‘moustache’ makes the black eye-stripe almost resemble a ‘Zorro mask’. The undertail and flight feathers are barred black and pale grey, with a distinct dark trailing edge to the wings and subterminal tail band.

The species can hover like Kestrel – a giveaway if you’re having trouble with a potential candidate in poor light. Hobby is more likely to be seen swooping around like its favourite prey, or picking apart a dragonfly on the wing (a habit shared by Red-footed Falcon). It may also gather in groups at good feeding areas. Peregrine, meanwhile, typically has a more purposeful flight and, like an aerial Cheetah, tends to hunt in bursts, either chasing prey directly or ‘stooping’ from a great height, during which it can achieve phenomenal speeds. 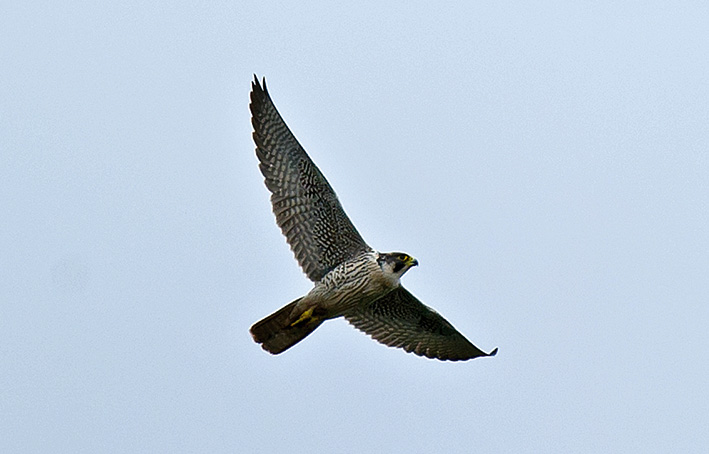 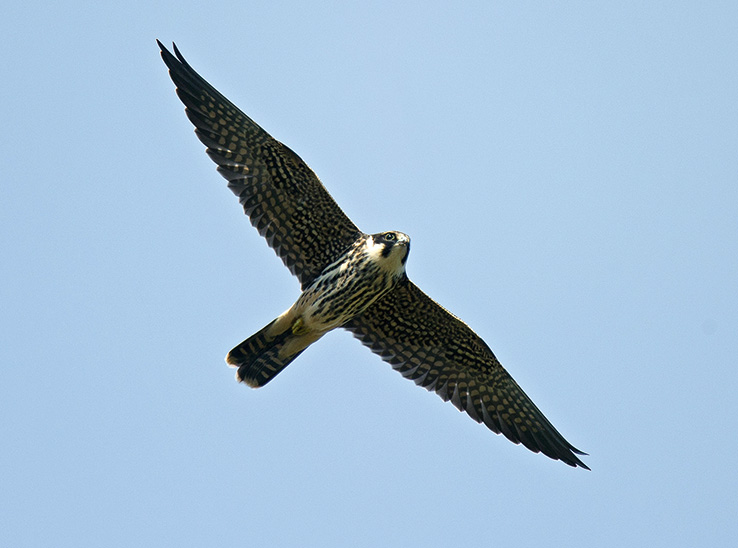 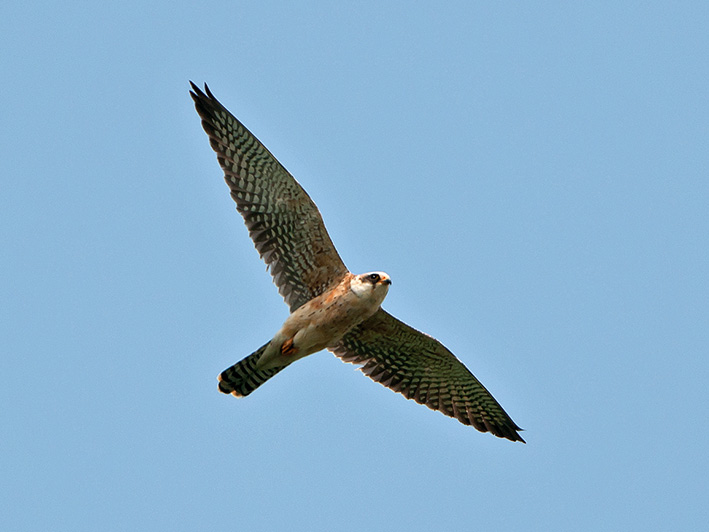 Red-footed Falcon (Pugneys, West Yorkshire, 11 May 2008). The pale head and
plain underparts of this female are distinctive. Photo by Steve Young (www.birdsonfilm.com).
Content continues after advertisements
Login to leave a comment
Return to List