A bird with all-black plumage tends to preclude any attempts to identify it using differences in colour and pattern, and this is the case with Rook and Carrion Crow. Adult Rooks have an obvious pale patch of bare skin around the base of the bill, but recently fledged juveniles of the species do not and can prove frustratingly similar to their commoner, more widespread congeners. In fact Rook doesn’t wear into its adult state until late winter or early spring, so distinguishing visually between the two species relies on the correct judgement of proportions and shape, the epitome of jizz.

A browner caste to the black plumage is a good indicator of juveniles of either species. Once age is established, the feathered thighs of Rook are a weighty clue, although this character is more easily ascertained by direct comparison between the two species. A thinner, more pointed-looking black bill adds to the slightly more lean impression of Rook, while the feathers at the base of the beak are rougher. Rook’s forehead is steeper, sometimes almost vertical, its crown more peaked and the overall appearance is scrawny.

Flight profiles are helpful when seen well, though the features can be hard to pick out when a flock of corvids is flushed and flying away. The tail of Rook is usually notably more spatulate and rounded than Carrion Crow – sometimes even having a graduated look due to wear – and it has much less of a secondary bulge, the rear of the wing being almost straight. The wings also average narrower, and often appear more ragged, especially when its ‘floppier’ mode of flight is taken into consideration. 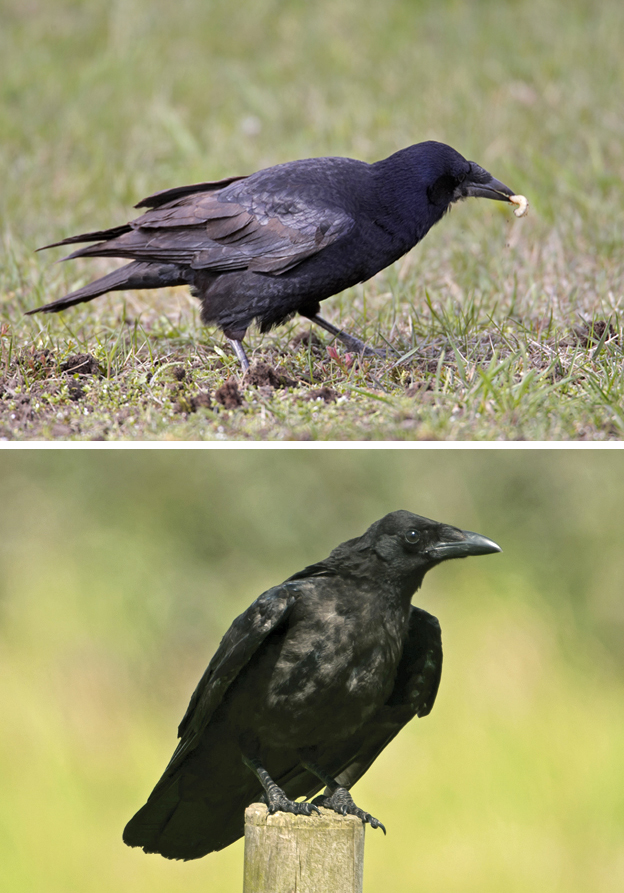 Juvenile Rook (Latvia, 21 April 2005, top) has a brown tinge to its flight feathers,
showing its age. Note the shaggy feathered 'trousers' and rough feathers on the upper mandible.
Juvenile Carrion Crow (Liverpool, 29 July 2008, bottom) is a more dapper affair,
with bare thighs and neat feathering on the bill base.
Photos by Markus Varesvuo (www.agami.nl, top) and Steve Young (www.birdsonfilm.com, bottom).
Content continues after advertisements
Login to leave a comment
Return to List