WITH the breeding season in full swing, fledglings are appearing everywhere as they make the first tentative moves away from the nest. Sporting their dowdier juvenile plumages, they can cause confusion among the more structurally similar species. Some of the birds that are most physically similar are the chats.

Four species can occur together, particularly in upland or scrub habitats, at this time of year: Robin, Northern Wheatear, Whinchat and European Stonechat. All have a scaly or spotted appearance and lack many of the diagnostic characters of adult birds, but they should be identifiable under reasonably close scrutiny and with experience.

The default young chat is our commonest, Robin. The most uniformly brown of the four, juvenile Robin has the open-faced, guileless look of the more familiar adult birds, but with a rufous tail base and outer tail feathers. The centre of the tail is a darkish brown, roughly matching the upperparts, which appear scaly, particularly on the mantle, scapulars, face and crown. More scaliness is present on the breast and upper belly, caused by darker brown spotting on the buffish background of the underparts, in the same place as the orangey-red breast colour of the adults. Beware some well-marked birds that have buff tips to the greater coverts, creating a prominent wing-bar. This causes a slight similarity to European Stonechat, but also makes the bird look somewhat un-Robin-like!

Perhaps most readily confused with Robin is juvenile European Stonechat. This has a more streaked than spotted appearance reminiscent of Spotted Flycatcher, but with a boldly streaked rufous rump and a dark brown tail. The adult’s wing-patch is already visible in prototype, while the edges of the secondaries tend to form a pale panel mid-wing. More striking is juvenile Whinchat which, though streaked and spotted on the upperparts, has a much more orangey-buff tone overall, and crucially shows the prominent supercilium of adult birds. The rump is also heavily spotted, with white-tipped black feathers among the buff, and the blackish tail has the white wheatear-like upper tail-sides also present in adult birds.

The true wheatear tail is already present in juvenile Northern Wheatear, which also has a grey, almost Dunnock-like, tinge to the head, which continues onto the mantle. Both areas are also streaked like the other chats, but this species has a much more pallid coloration overall. The rump is white as in the adult, making the bird unmistakable as it flits away from the observer, and the edges of most of the wing feathers are a pale rufous, surrounding blackish centres. The breast is scaly like in European Stonechat and Robin, but is very quickly moulted out, and birds seen away from breeding locations are already in first-winter plumage, by and large. 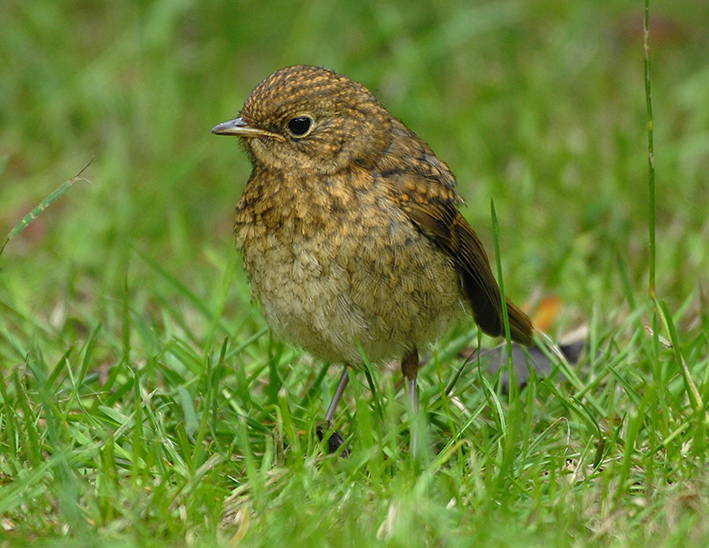 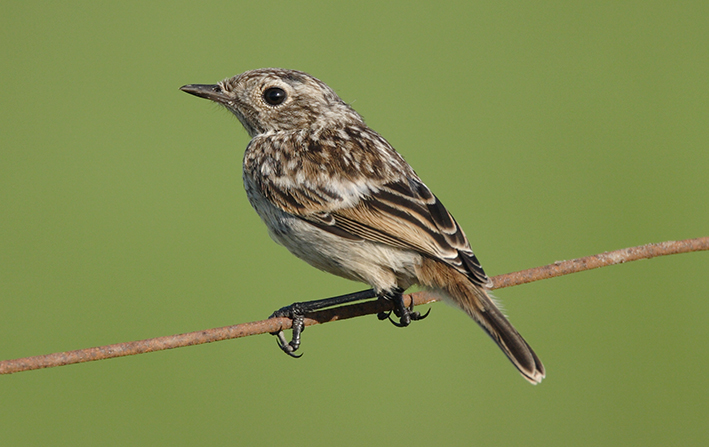 European Stonechat (Scheemda, The Netherlands, 28 July 2007). This fledgling is
already more varied in tone than Robin, showing a suggestion of the adult’s
wing-patch and a dark tail. Photo by Reint Jakob Schut (www.agami.nl). 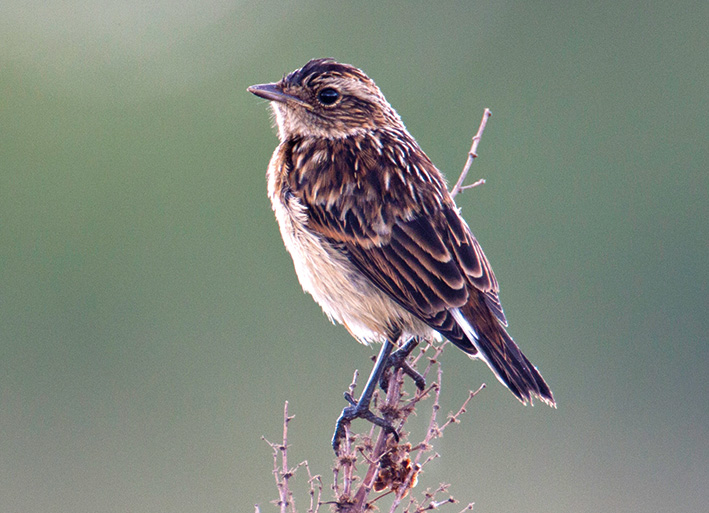 Whinchat (Pukkila, Finland, 6 July 2008). The diagnostic supercilium is already
apparent in this bird, but note also the almost wheatear-like white outer feathers at
the base of the tail. Photo by Arto Juvonen (www.birdphoto.fi). 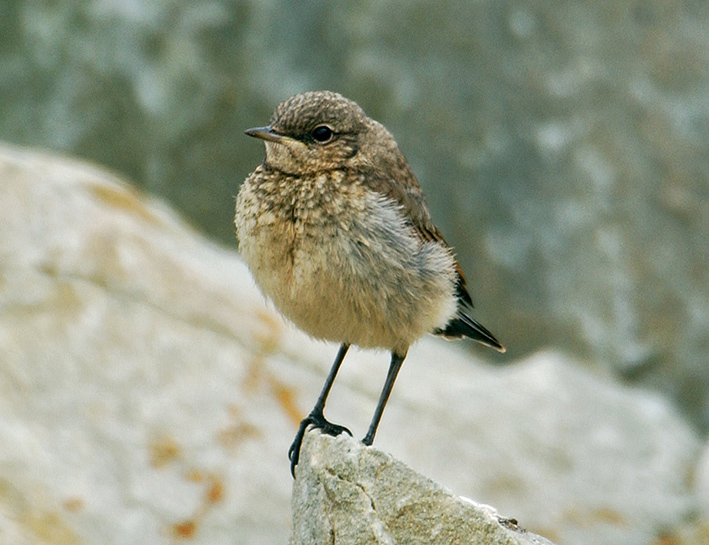 Northern Wheatear (Fair Isle, Scotland, 29 June 2003). Subtly pallid, and note the grey
tones to the finely streaked crown as well as the more ‘leggy’ stance typical
of this species. Photo by Steve Young (www.birdsonfilm.com).
Content continues after advertisements
Login to leave a comment
Return to List