Ivory from the Storm - a First for Gwynedd 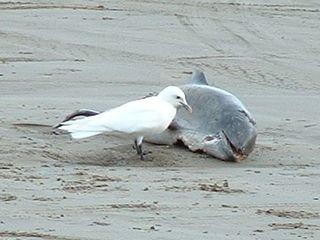 An exciting find on 9th February was made of an adult Ivory Gull at Black Rock Sands near Criccieth in Gwynedd. This is not only the first record for Gwynedd, but also the first adult to be seen in England or Wales since 1954 (when one was seen at Cuckmere Valley, East Sussex). Not surprisingly, many birders have travelled to North Wales to witness this fantastic species. Many deterred by the distance of travelling to Scotland for recent records of this desirable species will welcome the chance to see this species relatively far south.

Ivory Gulls breed in the high Arctic, wintering mainly within the drift ice of the Arctic waters and along the pack ice of the northern Atlantic. Not surprisingly they are rare visitors to Britain and Ireland with just 123 recorded to the end of 2000, but only 47 since 1958. Most are thought to follow trawlers south to British and Irish waters. The winter of 2001/2002 has been excellent for this species with three records in addition to this record:

The only previous winter to match this number of records was in 1979/1980 when 5 birds were noted.

Directions for this bird are as follows: go southwest from Porthmadog for 2.5 miles, past Morfa Bychan to the beach and car park, walk east for 60m to view the dead porpoise at SH526373, but please note that the beach is not accessed via Criccieth. If you do go, please keep your distance from the porpoise carcase to allow the bird to feed.