Stories of 'the good old days' on the Isles of Scilly are, and always will be, a popular topic of conversation among birders young and old. Tales of Hooded Warbler and Philadelphia Vireo, Catharus thrushes and Coccyzus cuckoos paint a wonderfully gripping picture of this unique archipelago that never fails to get the pulse racing. However, one reoccurring tale that never failed to catch my attention is that of an annual tussle at the summit of The Garrison, of a rivalry built up over many years of competitiveness and good spirit. With a childhood built on a love for football equally as much as birding, the idea of birders partaking in a football match on the Isles of Scilly unites my two greatest interests and fills me with exhilaration.

The legendary fixture was first played out in the late 1970s when visiting birders, on their annual autumn pilgrimage to Scilly, were challenged by the locals to a 'friendly kick-about'. It has been a struggle to find any accounts or accurate records of the first ever match (our search continues), but it is safe to say that the seeds were planted for a rivalry that would continue to grow over the years that followed.

Founded in the 1920s, the Isles of Scilly Football League is famed for being the smallest official football league in the world and has received an admirable amount of media attention in recent years, attracting the likes of David Beckham, Steven Gerrard and Sky Sports' FIFA Football Mundial show to their shores. The two great rivals, the Woolpack Wanderers and the Garrison Gunners, compete against one another year on year, vying for island glory in both league and cup competition. Despite the competitiveness of their league throughout the footballing season, all rivalry is put aside for the arrival of the visiting birders when a select eleven come to together to represent St Mary's island in an attempt to avoid humiliation at the hands of a 'bunch of clumsy twitchers'.

After learning of the fixture's untimely demise in the mid-90s, I wondered if it would be possible to generate enough interest to revive this October classic and once again establish its place on the birding calendar. In September 2014 I received an email from young birder and Scilly stalwart Elliot Mudd who, like me, was keen to arrange a match for the October that was fast approaching. In the weeks that followed we did all we could to spread the word and pull a team together to take on the islanders, but at such short notice we failed to find eleven birders that were able and willing to play. Another year would fall away without The Garrison being graced by a Scilly birders football team once more.

The wheels were now in motion, however! In early 2015 a plan was finally materialising and interest in the match began to grow. A generous sponsorship offer from BirdGuides soon followed which allowed us to purchase a brand new green and white kit. The brilliant Killian Mullarney kindly provided us with his stunning Black-and-white Warbler illustration, which would take pride of place as the centerpiece for our new team crest. Birders from across Britain continued to express their desire to play and the islanders were notified that the birders finally had a team once again. A date was set; the birders were coming!

17 October 2015 soon arrived. After a quick hour of early-morning birding, the team descended on The Garrison where the new trophy stood in wait. A quick team talk and a steady warm-up followed. The lads were ready for kick-off.

The match began well for the birders as we resisted some early pressure from the islanders. With the defence staying solid and Kev Kelly pulling off some world-class saves between the sticks, we reached the 25-minute mark with the islanders frustrated at 0–0.

With nearly half an hour on the clock we were forced into making a substitution at the back due to an 'injury' (toilet break) to our defensive rock, Matt Bruce. His brief absence soon proved to be our downfall as the islanders' number nine beat the offside trap before slotting home past Kev to put the home side 1–0 ahead.

A second soon followed for the islanders and, despite our hard work early on in the match, we found ourselves going into the break at 2–0 down.

Spider giving some much needed advice.

The second half played out in a similar fashion to the first. Despite pushing forward and creating more chances, the birders struggled to find a breakthrough, with a dangerous free-kick and a low shot bouncing back off the post the closest we came getting on the scoresheet.

Jay proving difficult to catch with the ball.

A counter-attack from the birders.

Our backline continued to stay strong as we faced a continued onslaught from the islanders' attack, with more outstanding saves from Kev being the only thing preventing them from extending their lead. Despite his acrobatics in goal, the locals soon had a third, which was closely followed by a fourth, and the gulf in fitness between the two teams was beginning to show.

Our loyal supporters in full voice.

With time ticking away, the game was out of our reach. We dug deep, managing to play out the remaining few minutes without conceding a fifth and greeted the final whistle with a sigh of relief.

Despite the result, the two best performances on the day came from the defence with the official BirdGuides Man of the Match Award going to Matt Bruce for a solid and commanding performance at centre-back. A special mention is also in order for Kev Kelly, whose heroics in goal ensured that the score remained respectable.

Man of The Match, Matt Bruce.

So it was to be a 4–0 defeat for the birders in the first match of this revived fixture, but it was a truly spirited performance nonetheless. Each and every one of the lads could hold their heads high: they had done the Isles of Scilly birders proud.

Despite all the hype and excitement surrounding the football match, we did not lose sight of the real reason we were all on the Isles of Scilly in mid- October — to bird! The weeks either side of the game were quiet by Scilly's standards and the birding was hard work and largely unrewarding. There were still a number of good birds on offer, however, resulting in the acquisition of a few life ticks and some good year ticks for a number of the birders football team. Early in the week, a showy Red-flanked Bluetail proved a favourite on St Agnes, while the reliable Hudsonian Whimbrel graced the Tresco shoreline. St Mary's played host to twitchable Blyth's and Richard's Pipits, and a Short-toed Lark gave crippling views by the airport runway. 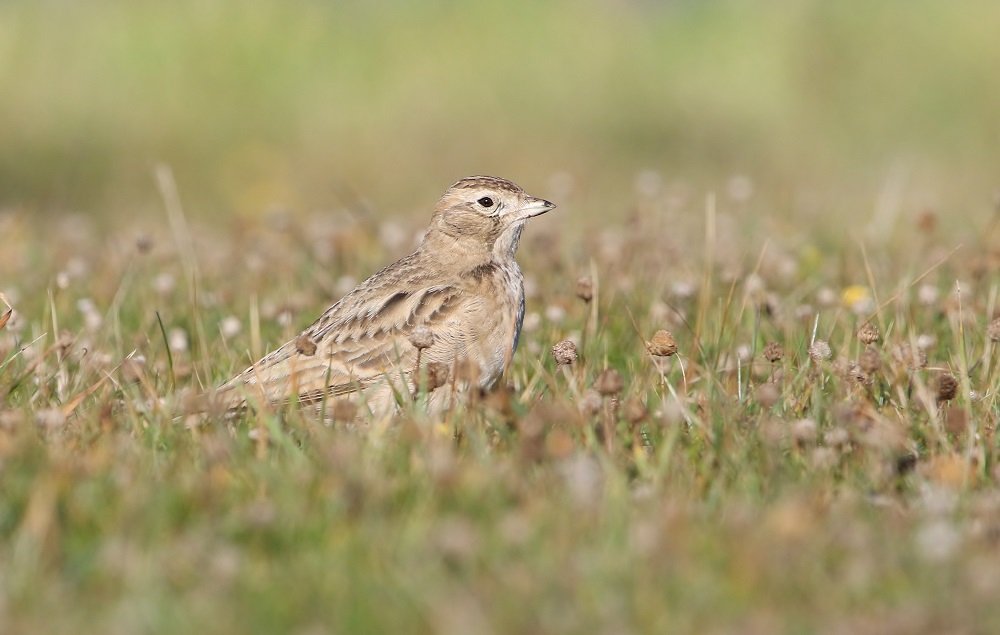 Two Little Buntings required patience at Lower Moors, while Black Redstarts, Yellow-browed Warblers and Firecrests were easy to come by and helped to fill in the gaps during the slow days. A boat to St Martin's rewarded many with good views of a flighty Ortolan and point-blank looks at an Olive-backed Pipit, with a fortunate few also connecting with a Common Rosefinch at the back of the cricket pitch. All in all, a very good week of birding; however, the footballing birders of 2016 will undoubtedly be working hard once again in hope of finding something just that little bit more exciting!

The Scilly Birders are set to pull on the famous green and white jersey and take on the islanders once again, this time on Sunday 16 October (10.30am kick-off at Garrison Field). Our team is looking strong this year, with a squad of 15 ready and raring to go! However, we would like as many birders as possible to be involved. Anyone who is due to be on Scilly over the weekend of the game is encouraged to come along and support us from the sidelines, take some photos and videos, chop up some half-time oranges or just simply be there to soak up the atmosphere and enjoy the occasion. Who knows, you may even find that flyover Chimney Swift, feeding over the Garrison as the victorious birders team lift the famous trophy!

You can follow us on Twitter (@ScillyFootball) for all the pre-match build-up, updates during the game, photos and videos, and all of our birding antics from our time on Scilly.

Special thanks to Jim Almond (www.shropshirebirder.co.uk) for use of his excellent match-day photos in this article.