The Chough stands proud on the Cornish coat of arms but the species became extinct in the Duchy in 1947, depriving Cornwall of one of its most charismatic birds and cultural symbols. That was until three Choughs of unknown origin appeared in Cornwall in 2001 and founded a new breeding population, restoring the 'Cornish Chough' to its historic home and causing great excitement among birdwatchers and conservationists alike. But where did the three pioneer Choughs come from?

Until now, it was thought most likely that they had travelled from Chough populations in south Wales or Brittany (France). But now some clever genetic detective work has suggested that the Cornish pioneers came from further afield — Ireland. Researchers collected moulted feathers that were naturally dropped by the Cornish Choughs, and by Choughs in other populations across Europe. Scientists from the University of Aberdeen then extracted DNA from the feather tips, and compared the DNA sequences of the new Cornish Choughs with those of Choughs living elsewhere. By far the best match to the Cornish Choughs was the Irish Choughs, suggesting an unexpected Celtic origin for the new Cornish birds. 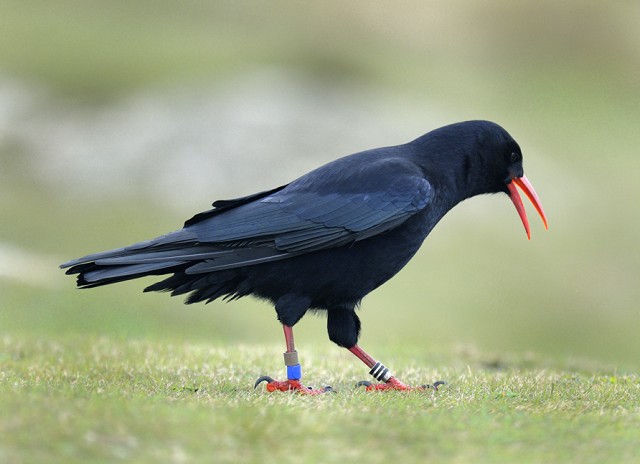 Dr Jane Reid, Royal Society University Research Fellow at the University, said: "We would never have known the origin of the new Cornish Choughs without the DNA analysis — we didn't guess that they would have come from Ireland." Claire Mucklow of the RSPB added: "We assumed those intrepid colonists would have come from closer populations; how wonderful that they have turned out to be Irish! The return of Choughs to Cornwall has been very significant, not just in terms of conservation but in terms of Cornwall's cultural heritage."

The new Cornish Chough population is now going from strength to strength; five pairs bred successfully in 2012. The future success of the population is being ensured by conservation organisations and farmers who are working to provide suitable habitat, and by volunteers who provide round-the-clock surveillance of nests. With recent sightings of Welsh Choughs in north Devon, there is potential for a merging of Celtic Chough diversity in southwest England, which researchers say can only be positive for the future prospects of this enigmatic species.

Written by: University of Aberdeen