The BTO are really excited to be following a female British Cuckoo for the first time. It might seem strange that we have only tagged one female Cuckoo, but this has been more by circumstance than design. The aim of BTO scientists was always to catch and fit satellite tags on five female birds this year, with a view to determining whether or not the migration of female birds differs from that of male cuckoos. However, females have proved surprisingly difficult to catch this spring, a combination of the seemingly late arrival in some areas (when the Scottish males were being tagged not a single female was heard) and the unusually wet and windy weather didn't help with the task. Idemili is the first female cuckoo to have a satellite tag fitted. She joins five male birds that have been tagged in Wales. She is an adult of at least two years of age and was caught in the Brechfa Forest, Carmarthanshire, Wales, on 10th June 2012. Idemili was named by Essex & Suffolk Water after the river goddess of the African Igbo religion in Nigeria, a region where the Cuckoos spent some of the winter in 2011/12. You can follow her progress online on her BTO blog page. 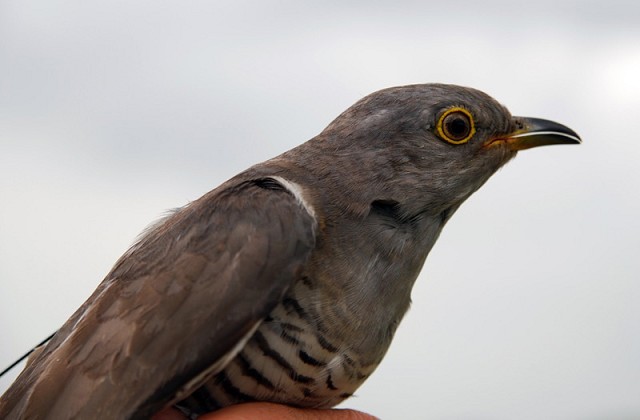 In addition, all of the Cuckoos have now received names. 115589 is the last English Cuckoo to receive a name. He has been named John, in memory of the late John Tully, who was a long-standing BTO Member, Regional Organiser (Avon), Chair of our Regional Network Committee and superb ornithologist. From Scotland, 115602 will now be known as Chance. He has been named after Edgar Chance, a British ornithologist noted for his pioneering studies on the breeding behaviour of the Common Cuckoo. 115600 has been named Mungo, named after Mungo Park, the Scottish explorer of the African continent. Our last Scottish Cuckoo to be given a name, 115593, will now be known as Roy after Rob Roy (Robert Roy MacGregor), Scotland's own version of Robin Hood. Rob Roy was born at Glengyle, at the head of Loch Katrine where the Cuckoos were tagged, in what is now Loch Lomond and The Trossachs National Park. And from Wales, 115597 will now be known as Lloyd. He has been named after John Lloyd, a long-standing BTO Regional Representative and our Honorary Wales Officer. In Welsh Lloyd becomes Llwyd and means 'grey', the colour of male Cuckoos. Since leaving Wales, Lloyd has travelled through France and is currently located in Italy, east-southeast of Florence.

There are now just two of the tagged Cuckoos left in the British Isles: Wallace, who remains in Scotland (after a short foray south of the border into England), and Idemili, who is currently just southwest of London. Lyster, the last of the English Cuckoos to leave, was still in England on 7th July but transmissions sent on 10th July showed that he had moved to the Champagne-Ardenne region of France, a distance of approximately 500 km (300 miles); by 12th July he was recorded as being on the Mediterranean coast of France near to Montpellier.

The remainder of the Cuckoos are spread across Europe. Scottish Cuckoo Chance was recorded travelling over the North Sea on 22nd June and by 24th June had settled in a wooded area near Gottsdorf in eastern Germany, 35km (21 miles) SSW of Berlin. David, a Welsh Cuckoo who also took a route through Germany, is currently in Montenegro. English Cuckoo Reacher is the furthest southwest of all the birds; he is currently located near to the city of Perpignan in southern France.

You can follow the progress of all of the tagged birds and find out how you can sponsor a Cuckoo on the BTO's Cuckoo pages.

After spending a month at her tagging location in Brechfa Forest, Idemili followed her male colleagues and moved eastwards to Surrey. She was in Wales on the evening of 9th July and we next heard from her in Surrey on the morning of 11th July. We thought all was well but received a phone call on 13th July from the Wildlife Aid Foundation in Leatherhead to say she had been picked up on 12th July in a garden in Tolworth, Surrey. She was underweight and had some wounds to her wing and some feathers were missing from her head indicating she had been attacked by another bird. She survived the night and is taking mealworms, crickets and water so there is hope that she will recover. While the bird hospital have confirmed that she shows no evidence of damage from the tag, Dr Chris Hewson, lead scientist on the project at the BTO, visited Idemili on 14th July to remove her tag while she recuperates, and to assess her physical condition. She is in excellent hands at the hospital and we will be keeping a close eye on her as she recovers.