With autumn migration beginning in earnest this month, it's time to scrutinise passage warblers as they undertake the long journey south. Among the commoner species on the move are two from Continental Europe which occur regularly in small numbers, yet remain scarce enough to qualify as notable finds anywhere in Britain and Ireland. Although very similar in appearance, Icterine and Melodious Warblers are 'doable' with practice and patience. Dominic Mitchell looks at this sought-after pair of Continental drifters. 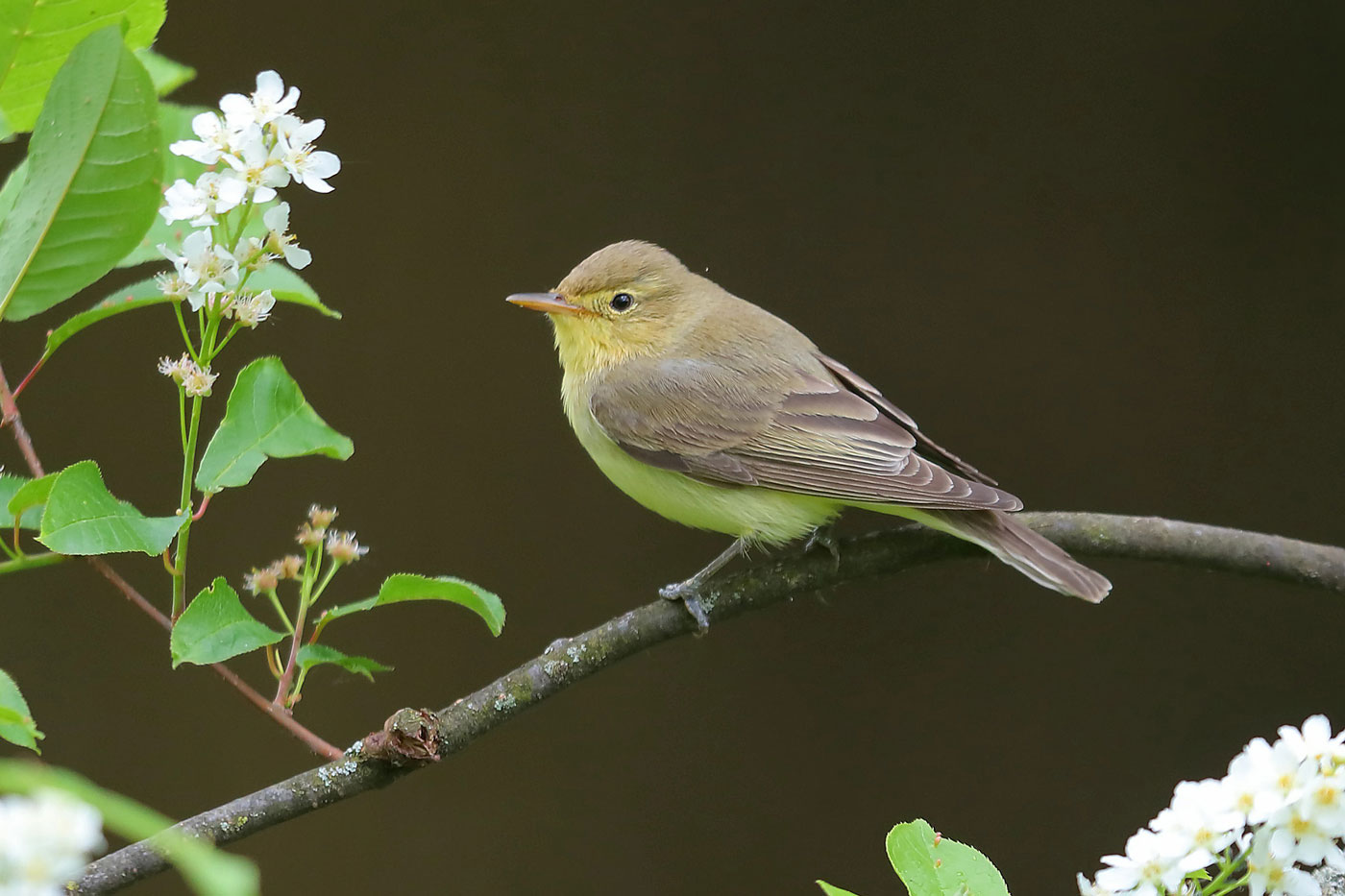 Adult Icterine Warbler (Białowieza, Poland, 3 May 2019). On location alone this smart Hippolais warbler is going to be Icterine, a common summer visitor to Poland – there are just a handful of records of Melodious in Eastern Europe. Its identity can be confirmed by the primary projection, which is usually three-quarters of or equal to tertial length in Icterine, but about half to two-thirds in Melodious. Note also the pale secondary edges, forming a whitish wing panel. A very small proportion of adult Icterines, estimated at no more than 5% of the Western European population, are greyish-olive above with much reduced yellow below (Bill Baston).

There is a select suite of species on the radar of every birder in autumn – regular enough to offer a realistic chance of discovery (weather and location permitting), yet statistically scarce and consequently always a welcome find. Near the top of this migrant hit-list are Icterine and Melodious Warblers, a species pair that breeds on the Continent and occurs in Britain and Ireland in autumn and, to a much lesser extent, spring.

Known colloquially as 'Hippos', Icterine and Melodious Warblers form the western species pair in the genus Hippolais (the 'tree warblers'). This genus is now half its former size, with Booted, Sykes's and Eastern and Western Olivaceous Warblers recently hived off into a separate genus, Iduna, along with three African species. The eastern duo of Olive-tree and Upcher's Warblers are the only others that remain in Hippolais alongside 'Icky' and Melodious. All members of this genus are monotypic, so any variation is individual or age related, and not associated with geographical range.

The more numerous and widespread of the two, Icterine Warbler breeds from Scandinavia south to Belgium and north-east France, and eastwards across much of Europe north of the Mediterranean region, as far east as western Siberia.

Most of the European breeding range is vacated between late July and September, with birds from north-west Europe moving south-east and those from Russia heading west of south, mainly across the central and eastern Mediterranean into Africa (Kennerley and Pearson 2010). A long-distance migrant, Icterine Warbler winters principally in the southern tropics of Africa from Uganda to northern South Africa.

Like other departing Scandinavian migrants, the species is prone to occur in Britain when migration coincides with an easterly or south-easterly airstream across the North Sea. It can then appear sparingly anywhere on the east coast between the Northern Isles and Kent, and to a lesser extent on the south coast. This is where confusion with Melodious Warbler is most likely to occur – for example, occurrences of Melodious significantly outnumber those of Icterine in Dorset (Green 2004), yet the reverse is the case on Scilly (Flood et al 2007). Icterine is classified as a rare migrant in Wales with 114 records prior to 2017 (Hughes 2017) and a scarce vagrant in Ireland (Hobbs 2020), where the total number of occurrences to 2018 is 225 (Barton and Flynn 2020).

Reflecting its northerly breeding distribution and longer migration, spring records of Icterine Warbler tend to average slightly later than those of Melodious, the first half of June often being a key time for arrivals. Breeding has occurred three times, in 1992, 2002 and 2008, and all in Scotland (Forrester et al 2007).

Icterine Warbler is typically greenish above and light yellow below, much like Melodious Warbler, and the distinctions – particularly the diagnostic primary projection – are discussed in depth in the captions to the accompanying photos. Pale variants occur; they are greyish-olive above with much reduced yellow on the underparts, and account for 5% or less of adults in western Europe (Kennerley and Pearson 2010).

Migrants are less vocal on passage (Shirihai and Svensson 2018), but spring males may give a strong, fast warbling song intermixed with mimicry and repeated phrases, often from more concealed perches than Melodious Warbler. Calls include a sparrow-like terr or chek and variations which may extend into chattering, as well as a Willow Warbler-like hooeet given mainly in late summer.

The south-western counterpart of Icterine Warbler, Melodious is a Western Palearctic breeding endemic with a much more restricted range. It breeds in north-west Africa in northern Morocco, Algeria and Tunisia, and in Europe from Iberia and France eastwards to Italy, Slovenia and north-west Croatia, and north to the Low Countries, with small numbers also in south-west Germany and Switzerland.

Its range has expanded in recent decades, and it bred for the first time in Belgium in 1981 and The Netherlands in 1990. Where the range overlaps with that of Icterine Warbler, the two species hold mutually exclusive territories; interestingly, the presence of Melodious in the same general area as Icterine reduces the latter's reproductive success (Hagemeijer and Blair 1997).

In mid-July, Melodious Warblers start migrating to wintering grounds in tropical West Africa. Passage continues until September and is predominantly in a southerly or south-westerly direction through Iberia and the western Mediterranean; the species is a vagrant to Scandinavia, eastern and south-east Europe, as well as Turkey, but is unknown in the wider Middle East (Mitchell 2017).

Small numbers of migrating or dispersing birds also reach southern Britain. Most records are in autumn in south-west England, with a few also in Wales; numbers vary significantly from year to year. It is rarer and less than annual in Scotland, where about three-quarters of the 68 records are from the Northern Isles (McInerny and McGowan 2019). As with Icterine Warbler, it is a scarce vagrant in Ireland (Hobbs 2018) and the total number of Irish records, 217, almost matches that species' total (Barton and Flynn 2020).

Melodious Warbler also occurs as an 'overshoot' in spring, though it is much less expected at that season (notwithstanding occasional significant arrivals). The most curious and unexplained aspect of this species' occurrence patterns is that, despite range expansion on the near-Continent, records in Britain have actually declined steadily in recent decades (White and Kehoe 2017). Statistically, it is becoming rarer than Blyth's Reed Warbler, a state of affairs that no one would have predicted 25 years ago.

Melodious Warbler is very similar in plumage to Icterine Warbler, but can be reliably told at all times of year by its shorter primary projection and (typically) weaker pale secondary panel. Other differences are subtle and may overlap with Icterine, so are supportive rather than diagnostic. Again, these are discussed in more detail in the image captions. Note that pale-variant Melodious Warblers lacking green and yellow in the plumage also occur, but are estimated to form less than 5% of the population in Iberia (Kennerley and Pearson 2010).

Migrants are usually silent on passage (Shirihai and Svensson 2018), but the song, a series of often fast, scratchy verses that may contain mimicry, is occasionally heard from spring males in Britain. The call is a clicking chet or drawn-out variations of it, as well as a sparrow-like chattering. 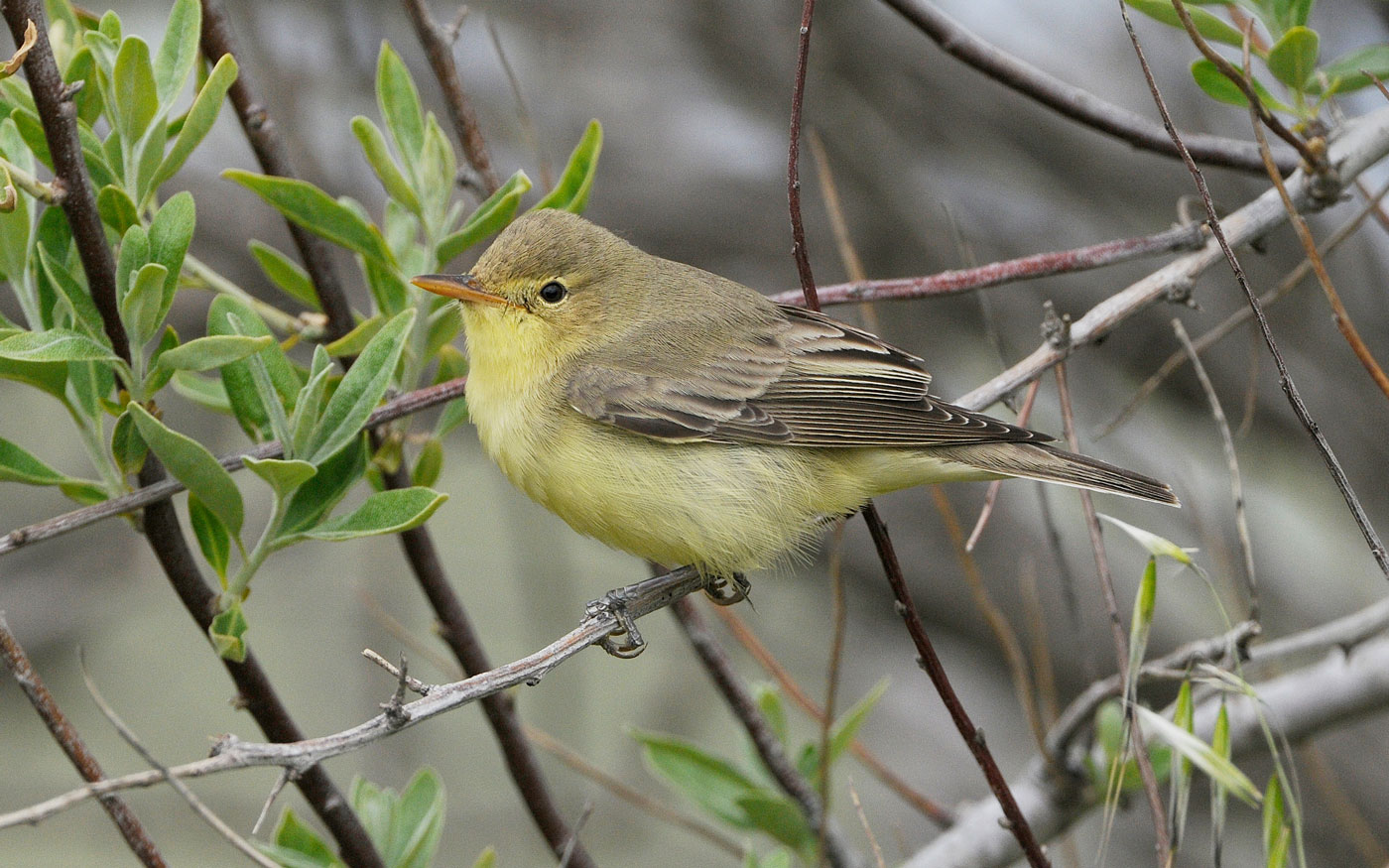 Adult Icterine Warbler (Lemnos, Greece, 28 April 2011). This spring migrant Icterine Warbler is greenish-grey above and extensively yellow below, the latter suffusion being most obvious on the chin and throat. The long wing point and pale secondary panel, more prominent here than on the worn wing of the bird in photo 1, are diagnostic, but other characters, including the grey-tinged upperparts, pale-tipped dark primaries and blue-grey legs, though associated with 'classic' Icterine, are only supportive, being subject to individual variation and the possibility of overlap with Melodious (Richard Brooks). 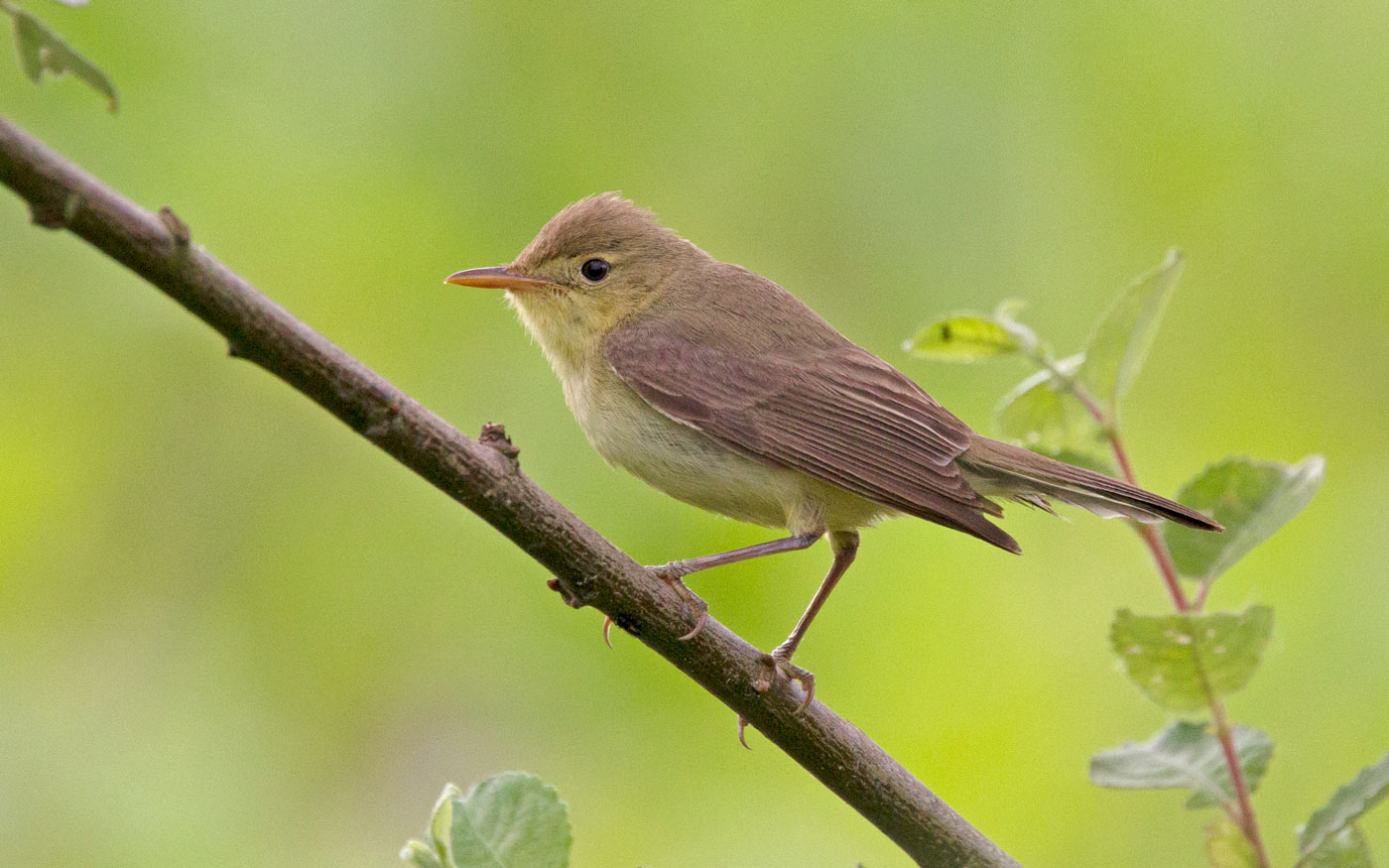 Adult Melodious Warbler (Ooijpolder, Nijmegen, The Netherlands, 12 June 2016). With no dark markings on the lores and a weak supercilium barely extending behind the eye, as well as a strong bill, the 'open-faced' look of this warbler immediately says 'Hippo'. Both European species now occur in the Low Countries in summer, but this bird's relatively short primary projection and lack of a significant whitish wing panel readily identify it as Melodious. Compared to Icterine, note also the brownish cast to the upperparts, the worn primaries lacking distinct pale tips, and brownish tone to the legs. Pale variants lacking green and yellow in the plumage are known to occur (Harvey van Diek / www.agami.nl). 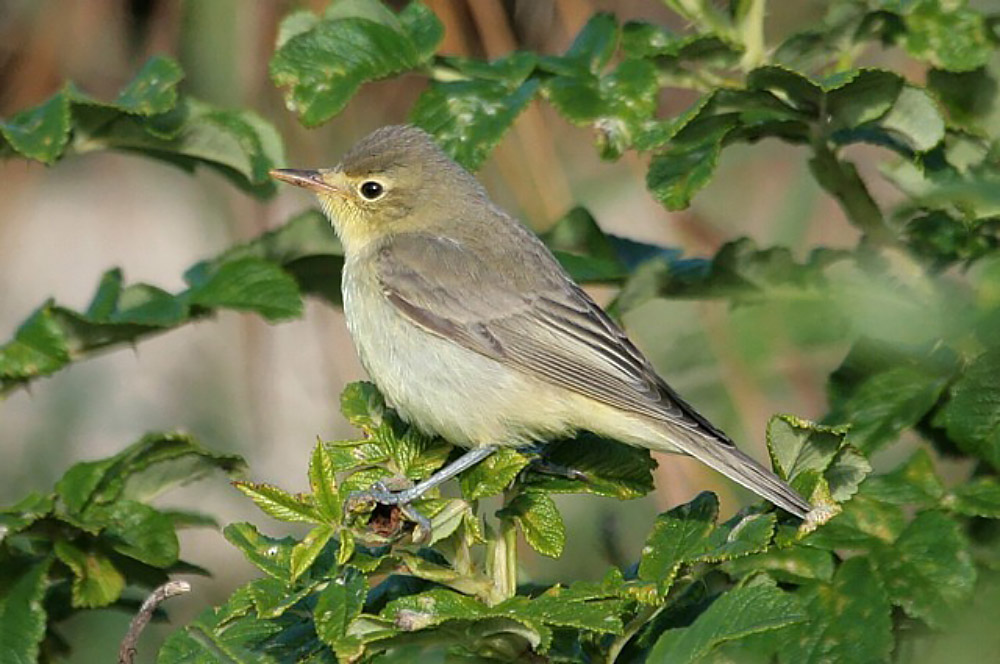 Juvenile Icterine Warbler (Scatness, Mainland, Shetland, 22 August 2009). This Icterine, with a typical date and location for an autumn arrival in Britain, can safely be aged as a juvenile by its uniformly fresh plumage – adults moult in Africa prior to spring migration and should show obvious wear by autumn. Typically, juveniles are slightly browner and less strongly tinged with green above, less saturated with yellow on the underparts and have a less contrasting pale wing panel (though it is often still more noticeable than on worn adults). The overall effect is a more subdued appearance compared with spring birds (Steve Minton). 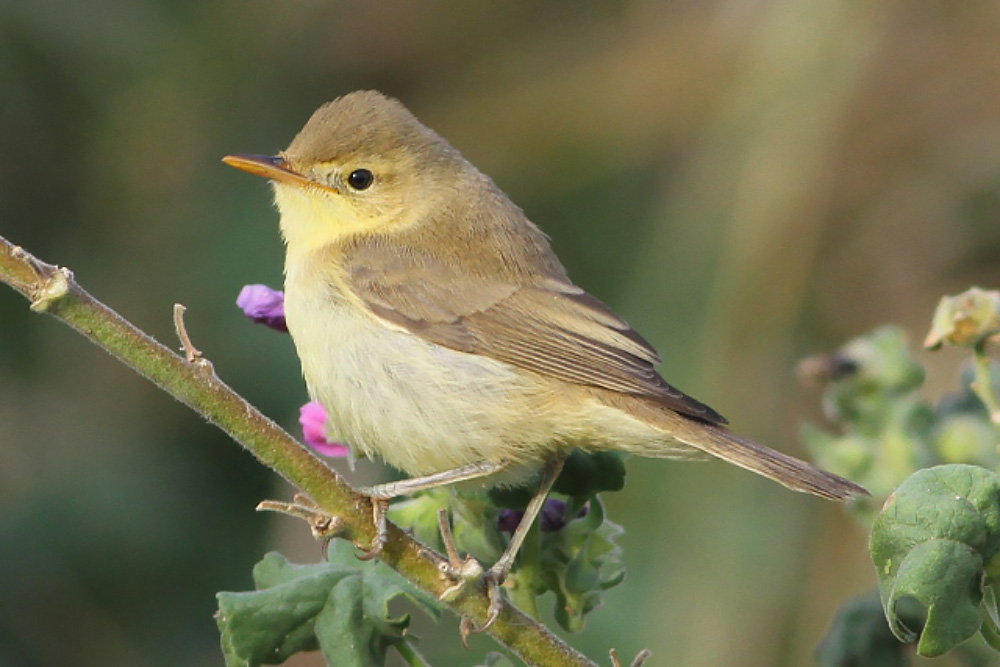 Juvenile Melodious Warbler (Portland, Dorset, 24 September 2013). Juvenile Melodious is also in fresh plumage in autumn, with brown-toned upperparts and reduced yellow below, often strongest on the face and throat. Most juveniles have rather plain-looking wings but this individual has a distinct pale panel, recalling Icterine; in this instance the key to identification as Melodious is its short primary projection. A further pitfall for the unwary in autumn is young Willow Warbler, which is also washed yellow on the underparts, but both Hippolais warblers are slightly larger with stronger bills, and lack the dark eyestripe and longer yellowish supercilium of that species (Peter Moore).