Hybrid spotted eagles at the Strait of Gibraltar

The final months of 2015 proved exceptional for 'spotted eagles' at the Strait of Gibraltar. At least 10 Lesser Spotted Eagles Aquila pomarina (LSE) were recorded from 25 August, when Victor Estrada photographed the first bird of the autumn in Tarifa, to 17 November, when we photographed a juvenile. Remarkably, four or five different individuals were observed from 23–25 September. This is probably the largest presence of the species ever recorded in Spain, where the species is considered a rarity, with only seven records officially accepted by the national committee of rare birds up to and including 2013 (J.L. Copéte, in litt.)

The plate below compiles nine records of different putative Lesser Spotted Eagles photographed in the Strait of Gibraltar during the autumn of 2015. None of these records have been reviewed by the rare birds committee yet. As far as we know, three to five additional possible records also occurred over the same period. 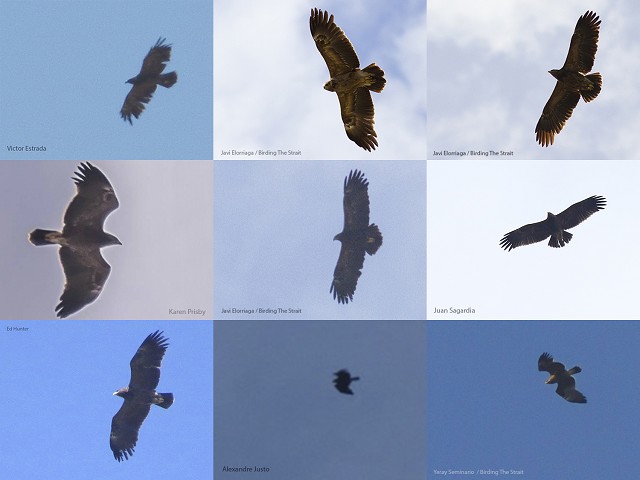 In general terms, all the above records fit well within the "minor migration route across the Iberian Peninsula" scenario described for LSE in this paper. However, there is an additional series of records that deserve special attention. These involve three presumed hybrids (or backcrosses) between Lesser and Greater Spotted Eagle Aquila clanga (GSE), including a satellite-tagged juvenile from Lithuania.

To put these records into perspective we recommend reading this paper, in which the widespread hybridization between the two spotted eagle species in Europe is highlighted by means of microsatellite genetic analysis.

1. On 29 October, Jose Mari Niebla photographed a striking juvenile in La Janda. As far as we know, this individual was not seen again until 20 December, when we obtained excellent views of it in the same area. It seems this individual is wintering but probably wandering over a large range, explaining the long spell between sightings. From a phenological point of view, the dates when this individual was observed fit better with a short-distance migrant (GSE) rather than with a long-distance migrant (LSE), which by late December should be south of the Sahara.

There is a general consensus on the mixed origin of this individual among the many fellows that have kindly shared their thoughts. Apparently, most plumage and structural features correspond to GSE, although the barring of the remiges suggests a certain degree of LSE influence. For those interested in going deeper into the field identification hints we strongly recommend reading Dick Forsman's blog and Jan Lontkowski and Grzegorz Maciorowski's paper in Dutch Birding. 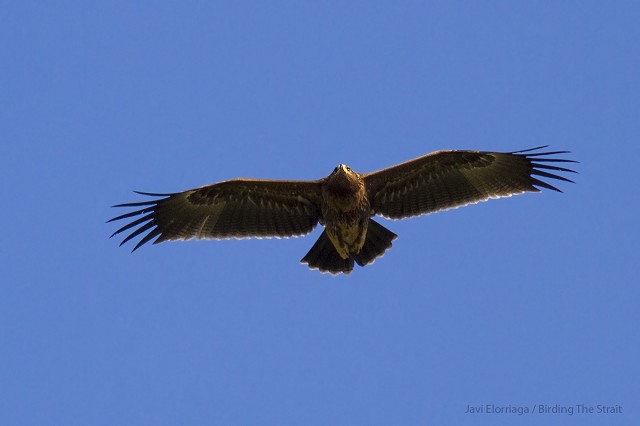 2. From 14 October to 24 November, a satellite-tagged hybrid LSE  × GSE, tracked from its nest in Lithuania, toured the La Janda area. The complete movements of this individual can be tracked with outstanding detail in Movebank. The Ornitela website provides very interesting additional information, including pictures of the nestling and its near-fatal collision with a wind turbine in Cádiz (a must read!). The map below shows the migration route of this juvenile hybrid eagle (in red) and another juvenile raised by the same mixed pair in 2014 (in blue).

This bird reached Spain on 8 October, crossing the Eastern Pyrenees in Lérida over the Montescurbas mountain pass (2,445m) and reached the Strait of Gibraltar six days later, where it settled. On 23 October Todor Todorov photographed it in La Janda. Despite an evident preference for La Janda region the bird was extremely mobile, visiting Huelva and even making a long detour to Valencia from 12–20 November. On 21 November it was back in La Janda and it was photographed there a day later.

On 24 November the eagle resumed its southbound migration and crossed the Strait of Gibraltar to Morocco. It crossed the Strait at exactly its narrowest part (14.5 km), departing from Europe at 1,500m asl and reaching the African continent at 400m asl in less than 20 minutes. At the time of writing this eagle is overwintering in southern Senegal, thus behaving as a typical long-distance migrant! 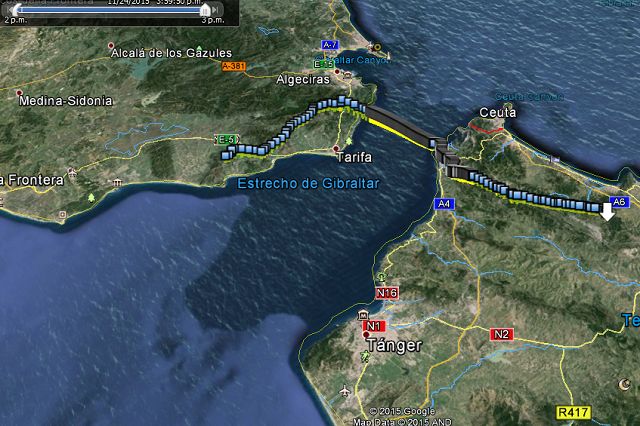 Track of the hybrid eagle while crossing the Strait of Gibraltar from Europe to Africa on 24 November (Source: www.ornitela.com)

3. On 26 November, Jose Mari Salazar photographed an 2cy+ spotted eagle in La Janda. Even though the initial pictures did not allow for detailed study, this eagle shows a combination of characters that again point to mixed ancestry. Physically it looks most similar to LSE; the barring of the remiges appears dense and covers the entire length of the feather (pro LSE) but the seventh finger (p4) is noticeably long (pro GSE). Phenology points to GSE or a hybrid.

This individual was relocated on 16 January 2016, identified by its body markings. Both seventh primaries are now fully grown but the moult has otherwise arrested, allowing us to recognise it and confirm it as over-wintering. The new pictures reinforce the mixed ancestry theory: though it has the overall appearance of LSE, it shows a striking dark iris (pro GSE) instead of the pale yellow expected in typical LSE at this age (4cy). The significant prevalence of LSE traits likely indicate this is not a F1 hybrid but actually a successive backcross in which the GSE influence is somewhat diluted. 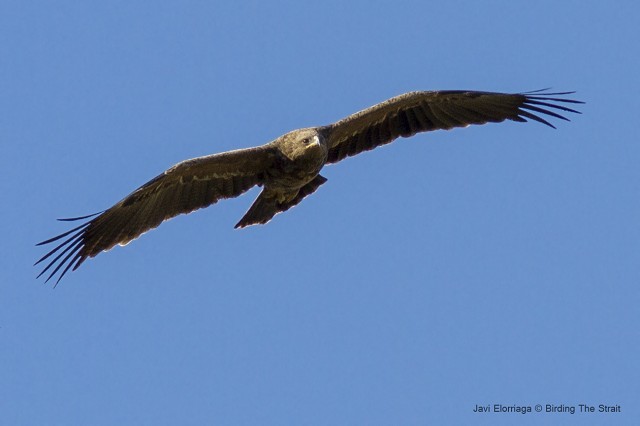 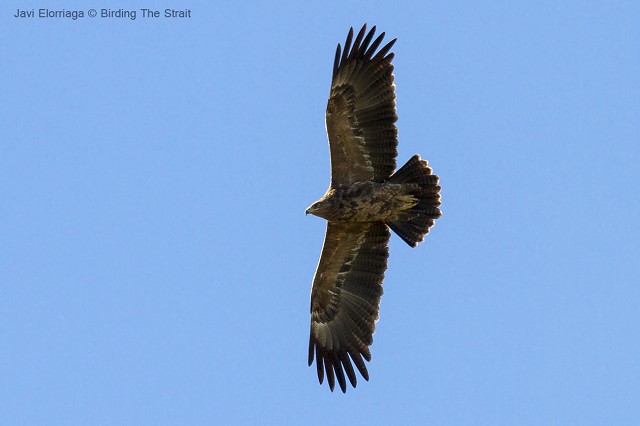 4. On 5 January 2016 Gonzalo Gil Marqués photographed a putative adult LSE in La Janda. Its individual markings (i.e. worn primary tips) show that it is a different bird to those previously recorded in the area. It was relocated by Jose María Zapata, Sarry and Javi Elorriaga the following day (and again on 24 January). Prolonged observation and better pictures unveiled some subtle GSE traits such as dark iris and clanga-like bill/head structure. This individual is very similar in all characters to that seen on 26 November by J M Salazar and this constitutes a further case of an apparent hybrid/backcross over-wintering in the area. 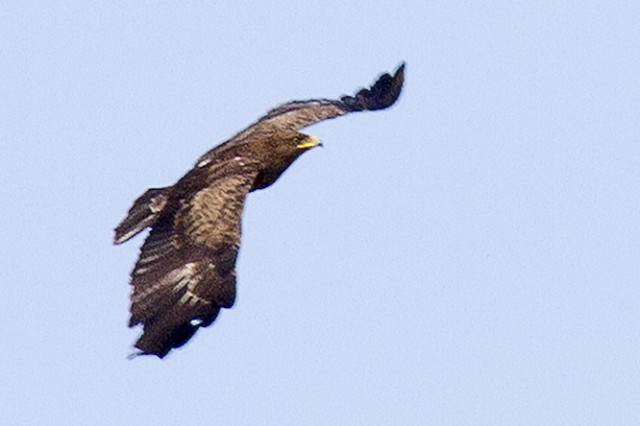 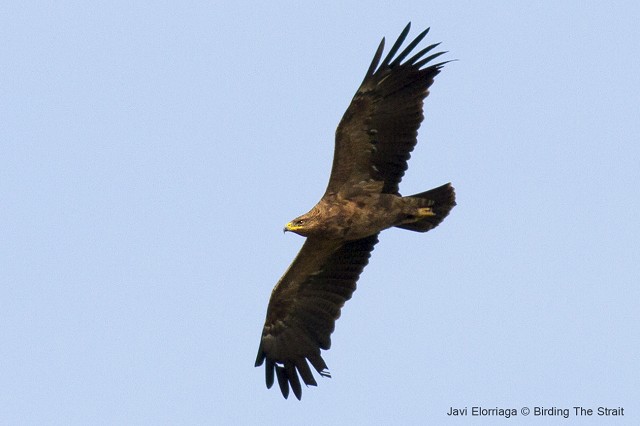 This recent upturn in records of migrating Lesser Spotted Eagle at the Strait of Gibraltar are in line with the species' probable increased use of the south-western flyway, as suggested by various authors. According to existing information, a significant proportion of the 'spotted eagles' observed here (and elsewhere in the Iberian peninsula) appear to be hybrids or backcrosses between Lesser and Greater Spotted Eagles. This seems especially true when it comes to records of birds later in the autumn and into the winter. In addition to this the Strait of Gibraltar, and especially La Janda region, has seen a gradual increase in number of overwintering individuals in recent years. Further available information about the presence of spotted eagles in the area in winter is still very scarce and requires further attention, while the eventual presence of Greater Spotted Eagle in the area seems equally possible.

Thanks to all fellow birders who shared their records and photos with us. We are particularly grateful to Mindaugas Dagys, Rimgaudas Treynis and Ornitela (Ornithology and Telemetry Applications) for kindly sharing high quality information on the Lithuanian hybrid and its satellite tracked migration. Dick Forsman and Jan Lontkowski have kindly shared their expertise on this subject and thoughts on the individual identifications.

Original article adapted from the Birding the Strait blog.