How birds of different feathers flock together

New research from the Universities of Cambridge and Exeter reveals for the first time that, contrary to current models used to explain the movement of flocks, the differences between bird species and social relationships between individuals play a critical role in determining the dynamics of mixed-species flocks. The unified behaviour of bird flocks has puzzled scientists for hundreds of years. One naturalist from the turn of the century even suggested telepathy may be involved. There have since been more logical explanations, including mathematical models that show that repeated interactions among individuals following simple rules can generate coordinated group movements. However, these models usually rely on the assumption that individuals within groups are identical and interact independently, which may not reflect reality.

Jolle Jolles, a PhD student at the University of Cambridge's Department of Zoology and author of the paper, said, "Spectacular collective behaviour can be found in a large range of animal species, and we now know that often these complex coordinated group movements may be the result of individuals following simple rules. However, rarely are the individual characteristics and social relationships within them taken into account. Our research highlights that these striking displays of group behaviour are much more complex." 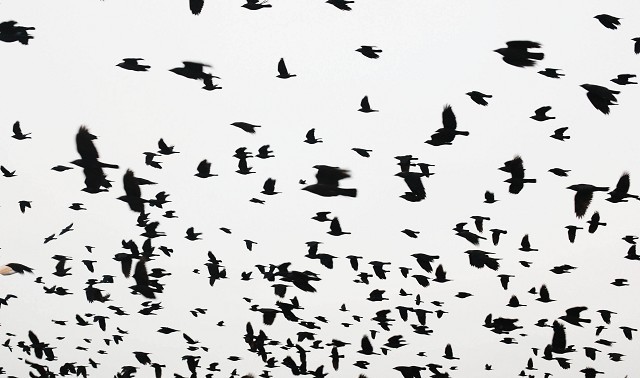 By analysing high-resolution photographs of mixed flocks of Rooks and Jackdaws (both from the corvid family), the researchers found that rather than individuals interacting in a consistent fashion throughout the flock, interactions depended on social dynamics between the different species as well as relationships within a species. The researchers discovered that birds prefer to fly close to members of their own species, and that the larger and more dominant Rooks take the lead by flying near the front of flocks. Additionally, the lifelong, monogamous pair bonds that are characteristic of both species seem to be reflected in flight, as birds often fly particularly close to a single, same-species partner.

Dr Alex Thornton, principal investigator of the Cambridge Jackdaw Project, now at the University of Exeter and author of the paper, said, "Together, our findings demonstrate that to understand the structure of groups — such as bird flocks — we need to consider the characteristics and relationships of the individuals within them."

The research, which was funded by the British Ecological Society and the BBSRC, was published in the journal Animal Behaviour.

The paper ‘Heterogeneous structure in mixed-species corvid flocks in flight’ is published in the March edition of Animal Behaviour. http://dx.doi.org/10.1016/j.anbehav.2013.01.015