Following the recent revelation in a review of systematic pesticides that neonicotinoids are causing significant damage to invertebrate species and their populations a new study, published in the science journal Nature has revealed that the pesticides are also having a significant negative impact on bird species.

Researchers in The Netherlands measured the effect of widespread use of a popular neonicotinoid, imidacloprid, discovering that when the chemical was highly concentrated in surface water supplies, local bird populations showed a significant decline. Birds most affected in the sites sampled included Starling, Tree Sparrow and Swallow. These declines were able to be tied in with the introduction of imidacloprid in the country in the mid-1990s, even when allowing for the effects of changing agricultural methods such as the intensification of farming. 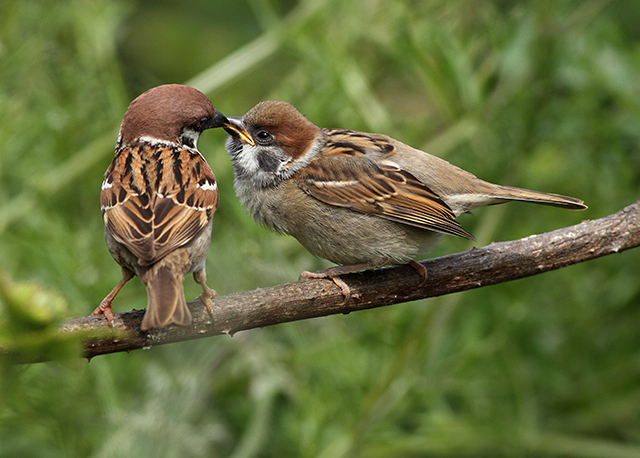 Tree Sparrow reproductivity relies on the abundance of insect life, on which neonicotinoids have been proven to have a negative impact (Photo: Steve Whiteley)

Relatively small levels of imidacloprid in the water (around 20 nanograms per litre) were allied to a 30 per cent decline in bird numbers, but many water sources had up to 50 times this amount present. The abstract of the study can be read below:

"Recent studies have shown that neonicotinoid insecticides have adverse effects on non-target invertebrate species. Invertebrates constitute a substantial part of the diet of many bird species during the breeding season and are indispensable for raising offspring. We investigated the hypothesis that the most widely used neonicotinoid insecticide, imidacloprid, has a negative impact on insectivorous bird populations. Here we show that, in the Netherlands, local population trends were significantly more negative in areas with higher surface-water concentrations of imidacloprid. At imidacloprid concentrations of more than 20 nanograms per litre, bird populations tended to decline by 3.5 per cent on average annually. Additional analyses revealed that this spatial pattern of decline appeared only after the introduction of imidacloprid to the Netherlands, in the mid-1990s. We further show that the recent negative relationship remains after correcting for spatial differences in land-use changes that are known to affect bird populations in farmland. Our results suggest that the impact of neonicotinoids on the natural environment is even more substantial than has recently been reported and is reminiscent of the effects of persistent insecticides in the past. Future legislation should take into account the potential cascading effects of neonicotinoids on ecosystems."

Songbirds rely on plentiful numbers of invertebrates to feed their growing chicks, in the process helping to keep the numbers of pest species down. Insect-eating birds' positions near the apex of rural ecological food pyramids also result in contaminants concentrating over time to produce indiscriminately deadly results, as was shown by the famous case of DDT (along with DDE), which thinned the eggshells of some birds of prey, including Peregrine Falcon, resulting in higher chick mortality.

There is already much published evidence that neonics concentrate in the environment to adversely affect non-pest species and cause declines in many insects, including economically and ecologically valuable honey bees, and the chemicals have been widely suspected of reaching to the very top of the food chain. It is becoming clearer that neonics have an all-pervading influence on our countryside, and rural health and economy, and some of the more common substances are now under suspension by the European Union (EU) to allow bee populations to recover and more research to be undertaken.

Put simply, if you indiscriminately kill insects you also kill off insect-eaters, and these invertebrates effectively run the engine of the world's entire ecology. Neonics are still widely used in Britain, where use of the substances is not monitored and the EU ban does not cover all manufactured forms of the chemicals.

A spokesperson for Bayer CropScience, quoted in The Guardian newspaper, said the paper "provides no substantiated evidence of the alleged indirect effects of imidacloprid on insectivorous birds. Neonicotinoids have gone through an extensive risk assessment which has shown that they are safe to the environment when used responsibly according to the label instructions."